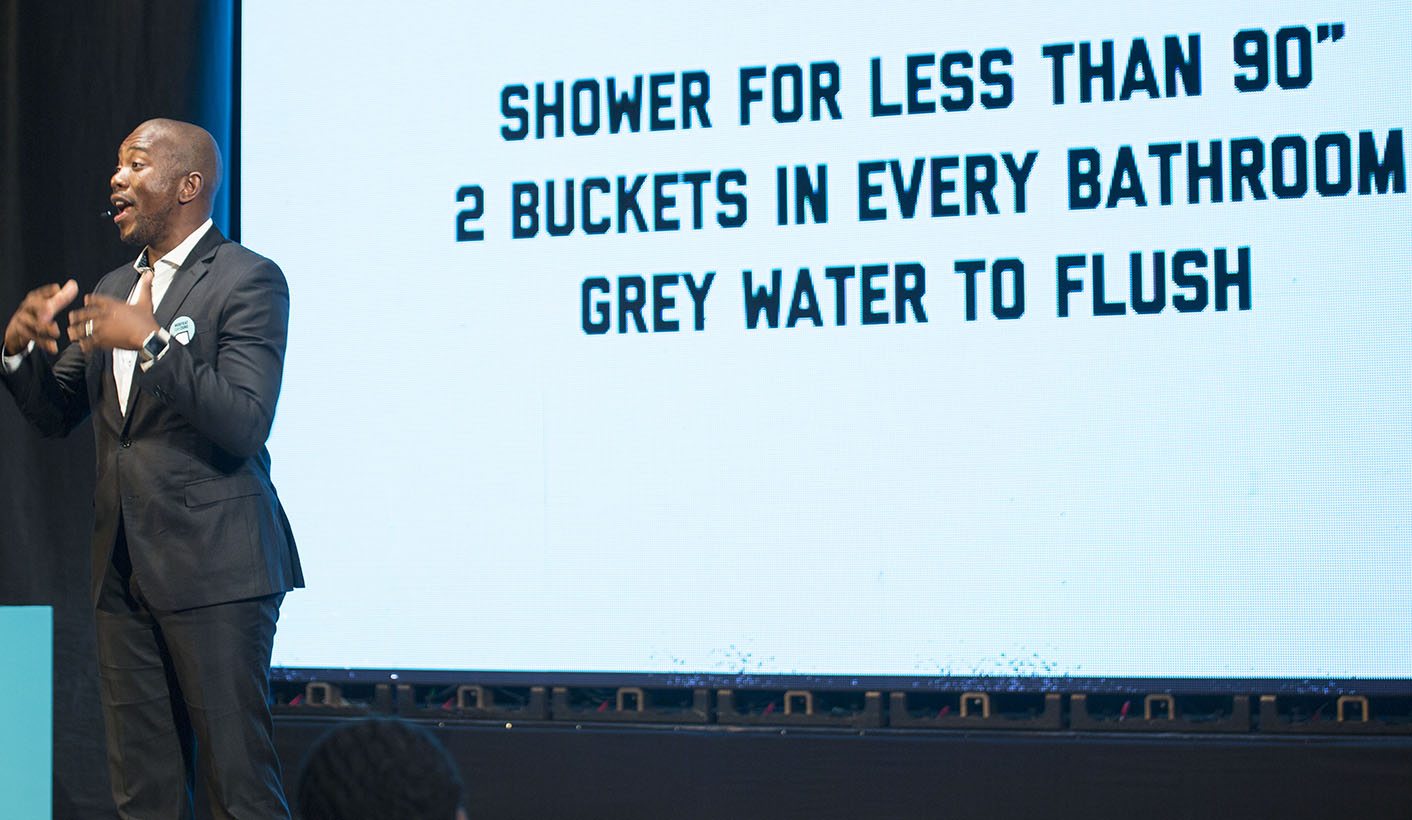 Judging by the response of the crowd at the Joseph Stone Auditorium in Athlone, Cape Town on Wednesday, DA leader Mmusi Maimane is finally saying what Capetonians want to hear about the water crisis. Promises of aggressive demand management strategies, regular updates on demand management, and a sincere “thank you” to citizens who, for their water saving efforts, were met with thunderous applause. But although the #DefeatDayZero campaign is striking the right notes, what remains unsaid is the crucial question: is it still in time, or will it be scorched earth? By MARELISE VAN DER MERWE.

DA leader Mmusi Maimane, whose public addresses have been known to take a measured tone, was not pulling any punches on Wednesday morning. The skills that have had followers describe him as an inspiring preacher were in full force as he addressed citizens and media at the Joseph Stone Auditorium in Athlone. It was more like a war cry than a status update. And the crowd, it appeared, were ready to enlist.

This was probably due, at least in part, to the newly introduced #DefeatDayZero campaign, which Maimane launched with Western Cape Premier Helen Zille, provincial DA leader Bonginkosi Madikizela, Cape Town Deputy Mayor Ian Neilson, Environmental MEC Anton Bredell, and Mayco Member Xanthea Limberg in tow. #DefeatDayZero – wisely – frames the drought as an epic battle; Day Zero as the common enemy which citizens and their leaders must rise up and defeat heroically, the proverbial dragon that must be slain at all cost. And with the collective help of all.

It’s a smart move. Despite the highly visible infighting and politicking that has plagued City leadership, and therefore the DA itself, in recent months – not to mention widespread criticism from ratepayers – Maimane and Co. seized the opportunity to present a united front. Not just in terms of leadership, but with the people of Cape Town themselves. As communication strategies go, it’s gold. And it went down like a packet of crackers, with the crowd applauding throughout. Maimane’s address was peppered with shouts of “Yes! Yes!”.

A particularly appreciative audience member audibly commended Maimane’s Afrikaans, after Maimane had delivered part of his address in three languages.

Just one stray heckler was quickly shown which way the wind was blowing when he attempted to call Maimane a liar. A chorus of “Smyt hom uit! Smyt hom uit!” (Chuck him out! Chuck him out!) broke out, with members of the audience attempting to show said heckler the door themselves when officials failed to do so. Maimane, cool as a cucumber, let the scuffle continue for a few minutes before continuing calmly: “We are not here to play politics. Every single one of us must continue to use less water. Use two buckets in every shower…”

Well, that settled that.

Why was Maimane’s address such a hit? In reality, there was not as much new information in it as one might have expected. The crux of it was the following three points:

Most of us are fairly familiar with points 1) and 3) by now, which can be largely summarised respectively as “big trouble” and “save water”. Point 2) was more complex. Maimane was at pains to state first off that the new team was taking DECISIVE ACTION (this phrase was on a PowerPoint screen in upper case at this point). Nonetheless, the finer details needed further clarification as they involved some of the water task team’s contingency plans for water augmentation and disaster relief, but these have not been publicly fleshed out in detail yet. Particularly hazy remains the question of flushing, which Daily Maverick has enquired about, and awaits a more detailed answer to.

Maimane reiterated the need to save water, underlining that augmentation programmes are not going to save us. He repeated the news that broke earlier this week, that Day Zero has now moved forward to 12 April due to a drop in dam levels, which are now at 17.2% usable water. (“No Easter bunnies for us,” commented an audience member.) And he notified Capetonians that they would need to prepare for water shedding and an increased rollout of water management devices, which are already being installed at a rate of up to 2,500 per week. This is in keeping with the City’s drive to reduce consumption to 450 ML per day.

Perhaps most importantly, Maimane promised regular communication with regard to disaster management should Day Zero strike. It was perhaps this that struck the most powerful chord with the audience, who were particularly appreciative of the promise that there were attempts to increase the number of water collection points, and that Zille was negotiating with members of the private sector regarding water deliveries to ease the load on affected businesses.

It helped that Maimane made a human connection with the audience, speaking “as a husband and father” and appealing to them that he found the “natural disaster” Capetonians were facing “very frightening”. From the beginning, it was clear this address was going to take a rousing direction, when he opened with the words: “It makes you think to yourself, what do I now need to do? It makes you worry about what it does in fact look like. Often human beings, faced with that challenge, make one of two decisions. Either you (take) flight, you run away, you exit… or you fight. I think today, more than ever, we face those stark choices and I believe the only choice we are left with is to fight. Our choice is to put ourselves in the ring and say, is it possible that we can defeat Day Zero?”

Note, here, that the answer is “yes”. But that the choice of words is not “prevent Day Zero”.

The strategy for defeating Day Zero was therefore twofold. Try to prevent it, but if you can’t, beat the heck out of it.

But other than the above-mentioned new information, much of the address was a reiteration or clarification of much of what we have heard previously: a repeat of the competencies national government is responsible for, but failed to deliver, and promises that Premier Helen Zille would be applying more pressure. There was an admission from Maimane that he was dissatisfied with the running of the water crisis by the City thus far (but we knew that). He mentioned that DA-run cities report to DA leadership and the Federal Executive, though they would never take “political control” (but we know some opposition councillors in the Cape Town City Council aren’t happy with that interpretation). And he reiterated that essential services would remain uninterrupted, although besides hospitals, there was no further clarification of what this would include. (Daily Maverick has submitted a question regarding this too, and is awaiting a response.)

The important change, therefore, was really in the tone, which appeared to reduce the anxiety of those in attendance enormously. There was a promise of clear and regular communication, with Maimane acknowledging the “deep paralysis and anxiety that have come with lack of information”. There was also a promise that some of the major concerns around disaster management – such as the number of water points and the difficulty of accessing water for businesses – are being addressed, even if the details are still unclear. Whether or not Mayor Patricia de Lille’s team would have done this at the same stage, we will never know now. All we know is that if the crowd reading in Athlone was an indicator, Maimane has support.

Yet he is not out of the woods, and the way he and his team handle this new departure in water crisis management will be a stringent test of their judgement in removing the mayor’s powers at the eleventh hour. If Wednesday was a test of Maimane’s communication skills, the weeks ahead will be the test of his abilities to carry out the promises he’s making. Yet the other nagging question, of course, is that as decisive as any action take now may be, is that it may still be way too late.

“Many people in the city and country have expressed to me a lot of unhappiness, concern and confusion as to how the DA-run City of Cape Town has been responding [to the water crisis],” Maimane said. “I want to assure you I have heard you.” The next few weeks and months will reveal whether that is the case – and whether it has come in time. DM