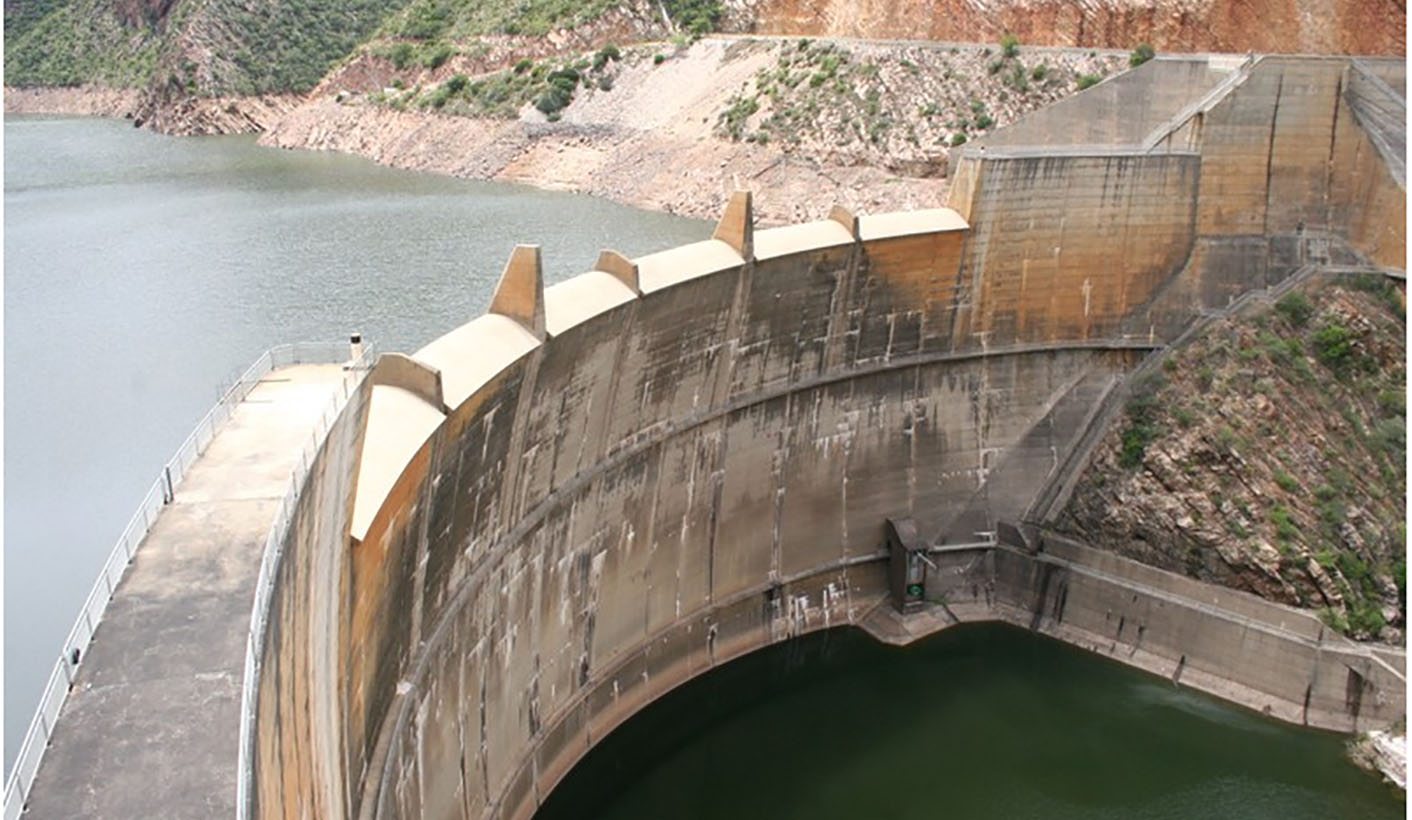 Cape Town has dominated headlines as the city most likely to run out of water due to the crippling drought in the Western Cape. But as officials in the Cape Town Mayor’s office scramble to work around a series of political scandals within the province’s ruling DA, the neighbouring Eastern Cape has been rolling headlong into disaster. And they don’t have a lot of options. By MARELISE VAN DER MERWE.

While Cape Town’s water crisis has been dominating headlines, some of the Eastern Cape’s key dams have been quietly barrelling towards disaster, rapidly overtaking their still-fuller cousins in the Western Cape.

Kouga dam, an arch dam on the Kouga river, is one of these. Its full storage capacity is 126 million cubic metres. Last year this time, it was 44.6% full.

Department of Water and Sanitation national spokesperson Sputnik Ratau has been urging residents to save this “precious resource”, but dam levels continue to drop fast. At the beginning of the year, mayoral committee member for infrastructure and engineering Masixole Zinto said the combined state of the Nelson Mandela Bay area’s major dams – Kouga, Churchill, Impofu and Groendal – had hit the “lowest ever” point since their 31% average in 2010.

Restrictions, meanwhile, have not succeeded in stemming the rapid drop in water levels. The start of 2018 saw the Kouga Local Municipality announcing that water shedding was likely for the Gamtoos Valley towns of Hankey and Patensie, which had already used nearly their full allocation of water for the next six months. Hankey had used all but 9%; Patensie all but 36%.

For residents, the outlook is bleak. The combined dam levels are worrying, and the drying up of the Kouga dam is bad news: communities large and small depend on it. The dam supplies irrigation water to the Kouga and Gamtoos valleys as well as drinking water to the Port Elizabeth metropolitan area.

The Kouga region, which includes Jeffreys Bay, Humansdorp and the Cape St Francis, was declared a disaster area in May 2017.

Meanwhile, the Amathole district is also a disaster area. The Xilinxa, Dutywa, Bedford and Adelaide dams were critical in 2017, with the Dwesa and Qwaninga rivers running dry, mayor Nomfusi Nxawe said in 2017. In August, water shedding began in earnest, with water supply to Butterworth, Adelaide and Bedford being cut entirely on Mondays, Wednesdays and Fridays, and restricted access on Mondays and Thursdays.

The Eastern Cape was one of the later provinces to join South Africa’s widespread water shortage – in 2015, it was not yet among the five provinces declared disaster areas – but it has been catching up fast. By 2017, some 40% of oranges were dropping off trees at farms in the Sundays River Valley, causing a major impact on the area’s fruit industry.

According to the South African Weather Service’s Seasonal Climate Watch, issued late in December, the El Niño-Southern Oscillation would see increased likelihood of above-average rainfall in much of the country in January, February and March but – as predicted earlier in 2017 – this was likely to skip much of the Western and Eastern Cape. It is only in March, April and May that the rainfall outlook starts looking a little more positive in some areas of the drought-stricken provinces – and even then, not enough.

For rural residents, the impact can be particularly harsh – particularly those already experiencing service delivery challenges. For many residents, service delivery issues have combined with drought to pack a heavy punch. Ezibeleni, for example, has faced dry taps for three months on end, with no explanation from the Chris Hani District Municipality.

A visitor to the area over the festive season told Daily Maverick she had been to see family, but had no access to fresh water for the duration of her visit. “The river was just slime, it was green,” she said. “Everybody is doing their washing, and the animals are drinking from the same river, and there is not enough water for it to stay clean.” Water tanks were very difficult to come by, she said.

For drought-stricken municipalities the options, at this stage, are minimal. Kouga municipality started drilling for groundwater late in 2017, but Executive Mayor Elza van Lingen said at the time that she was not optimistic that there would be an enormous yield. The geology of the area, she said, was not conducive to groundwater retention.

But – like Cape Town mayor Patricia de Lille before her – Van Lingen emphasised that augmentation was not a solution in any case. “We also need residents and business to play their part.

“Please use water extremely sparingly and only when absolutely necessary.”

Zinto underlined that reducing consumption, as in Cape Town, was the core strategy. This is largely because, like Cape Town, the area is not overrun with alternative options. Limited relief available to the municipality includes trucking in water, or pumping water from the Klein River.

The trouble is, reducing consumption further is proving problematic. Van Lingen described the already-paltry allocation, without further restrictions, as “insufficient”.

A much larger problem

The reality, says Siyabulela Manona, is that provinces like the Eastern and Western Cape cannot think only in terms of short-term drought solutions, because drought is only a symptom of a much larger problem. Manona is a partner at Cape development consultancy Phuhlisani, with a background in development planning, implementation and policy development. He previously worked in rural water, environment and forestry, and for the Eastern Cape’s Border Rural Committee.

Manona told Daily Maverick it was necessary for policy-makers to take a long-term view with regards to drought, and to apply different lenses to rural and urban dwellers. “The risks are different for city and rural residents,” he said. “Rural residents are very vulnerable to extreme weather conditions in some ways. But city dwellers may be more vulnerable to fires or other, related events. We are not only dealing with one drought. We are dealing with climate change, which is a longer-term problem. It is important to realise that, and to plan our development accordingly, both in urban and rural areas.”

This includes a shift towards subsistence and small-scale farming with more water-sensitive approaches; curriculum changes that include a focus on sustainability; and rethinking urban planning to maximise limited resources. A practical difficulty, he said, is the influence of five-year terms in government, which means there is too little room for meaningful long-term implementation at municipal or provincial level.

Manona told Daily Maverick that the cumulative impact of cold, extreme heat, dry conditions, flooding, drought and other extreme events have had noticeable impacts on those in small villages and rural areas in recent years. “People are keeping less livestock, they complain about the heat and having little access to water,” he said. “On the positive side, however, there is an increased awareness of the impact of climate change. We must not overlook that. We must work with that.”

That being said, he added, one “must not ignore” the impact on cities, either.

“This is not just a drought,” he said. “This is something much bigger than that. Drought is only one part of it. We must start to plan differently, live differently, which is something not everybody is ready to hear.” DM