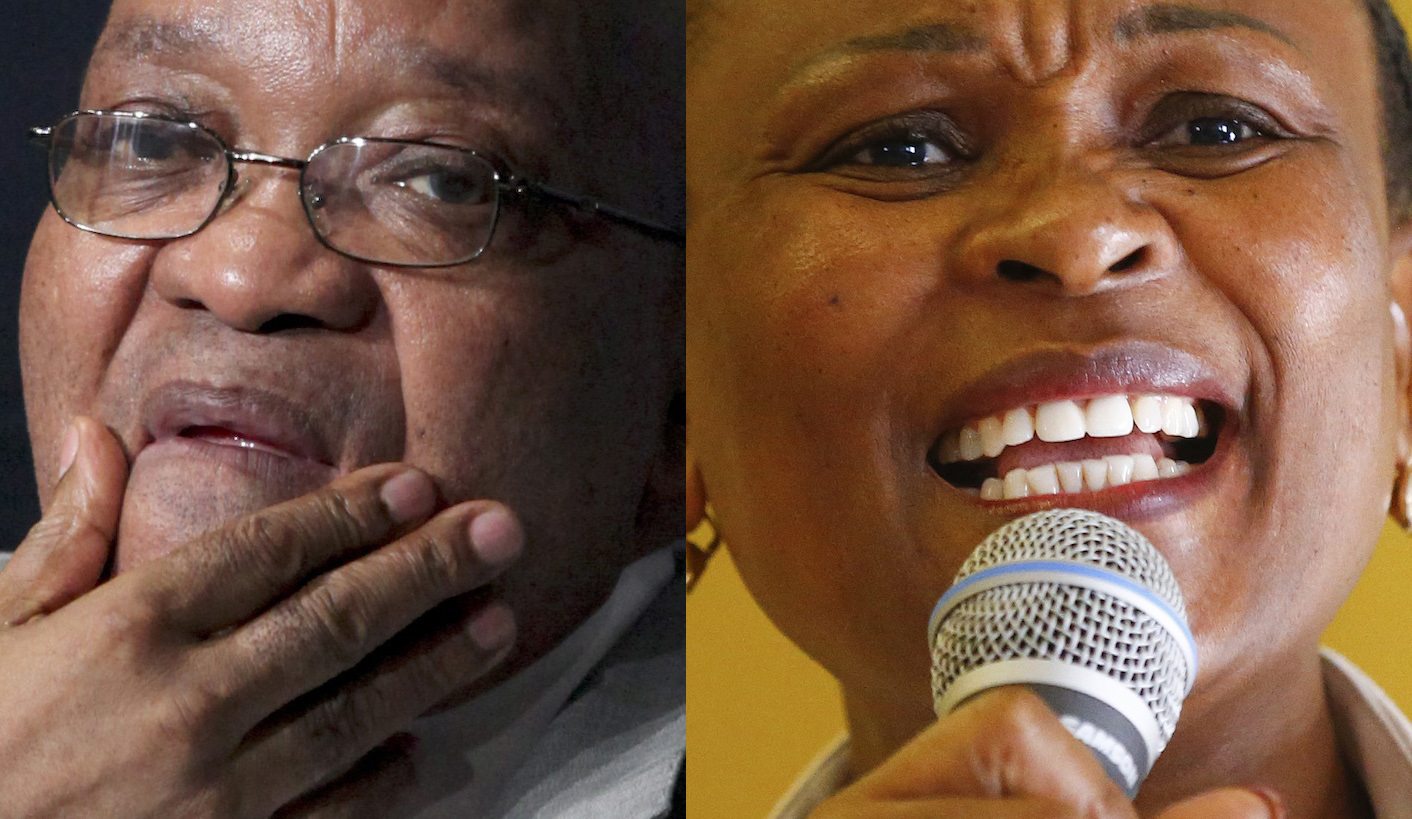 Public Protector Busisiwe Mkhwebane on Wednesday welcomed President Jacob Zuma's announcement that he would establish a commission of inquiry into state capture. She called for the terms of reference to be as broad as possible, which was welcomed by some, but also raises concerns. By GREG NICOLSON.

In a statement released on Wednesday, Mkhwebane said Zuma should not limit the terms of reference for a commission of inquiry into state capture to the findings of her predecessor Thuli Madonsela’s report, but ensure the terms are broad enough to cover allegations concerning the state and all its entities.

Zuma announced on Tuesday evening a commission of inquiry into state capture would be established and led by Deputy Chief Justice Raymond Zondo to “investigate allegations that the state has been wrestled out of the hands of its real owners, the people of South Africa”, but the details of the inquiry are yet to be released.

The terms of reference will determine whether extensive evidence against the Guptas, Zuma and his administration, and their allies in business, is further investigated or buried under wider claims of wrongdoing.

Madonsela recommended Chief Justice Mogoeng Mogoeng name a practicing judge to lead the inquiry into her findings, which implicated Zuma and his allies in corruption allegations against the Gupta family. The president took her report to court, arguing that only he has the power to appoint such an inquiry.

Zuma and his allies in the ANC have long committed to appointing an inquiry, but have suggested “state capture” allegations extend beyond the Gupta family. They’ve claimed all allegations of private interests controlling the government should be investigated if an inquiry should be established.

Corruption certainly extends far beyond the Gupta family, and further investigations into other allegations should and could have been established, but an inquiry regarding broad rather than specific allegations would likely yield no tangible results.

“The commission must seek to uncover not just the conduct of some, but of all those who may have rendered our state or parts thereof vulnerable to control by forces other than the public for which government is elected,” said Zuma in his announcement. “There should be no area of corruption and culprit that should be spared the extent of this commission of inquiry.”

Mkhwebane supported his idea of a broad investigation. Her office said:

“In order to ensure that no stone is left unturned in so far as the allegations of state capture are concerned, and in order to avoid any further allegations of state capture being lodged with the Office of the Public Protector, the Public Protector calls upon the president of RSA to ensure that the terms of reference for the commission of inquiry are not limited to the issues investigated or identified in the State of Capture report.”

While matters relating to the appointment of the inquiry are still in court, it appears Zuma can still dictate its terms of reference. Reams of evidence against Zuma and the Guptas has been revealed in the #GuptaLeaks since Madonsela’s report was released, which implicate both private executives and government officials the former public protector did not touch on. Opening the inquiry to such new evidence would allow these matters to be investigated and those responsible to be held accountable.

The risk comes with the definition of “state capture”. Zuma has a political motive. He spent significant time and resources opposing the establishment of an inquiry only to relent a day before an ANC national executive committee was said to debate his removal.

It’s unclear what he envisions the inquiry doing now he has acceded. How far back does he want allegations of corruption to be investigated? Is it just related to the Guptas, or will it include the Arms Deal, or corrupt municipal governments, or the crimes committed by the corrupt entities of apartheid era?

DA leader Mmusi Maimane was one of the original complainants that led to Madonsela’s state capture investigation. His spokesperson Portia Adams on Wednesday said the inquiry “mustn’t only focus on the Gupta family and its relationship to President Zuma”. She said citizens should come forward with any allegations of state capture they might have.

The DA’s statement on the matter called for the inquiry to investigate Zuma’s relationship with the Guptas and the family’s dealings with the state, the capture of SARS, the NPA and the Hawks, and any other allegations outlined in Madonsela’s report.

“We will not allow this commission to be another whitewash that absolves all politically connected individuals from accountability, and where appropriate, prison. It must be properly staffed, fully funded and free from any and all political inference,” said Maimane.

UDM leader Bantu Holomisa said the inquiry could include broad allegations of state capture but must prioritise the findings of Madonsela’s report.

“We’re not in a game of sniffing for corruption here. We have hard evidence.”

Holomisa suggested the inquiry be held in phases. It should first investigate Madonsela’s findings and work with the Hawks and NPA to hold those responsible accountable before moving onto broader allegations.

He said Zondo’s appointment, once finalised, was a positive move, considering the judge had heard matters related to Madonsela’s report in the Constitutional Court. DM