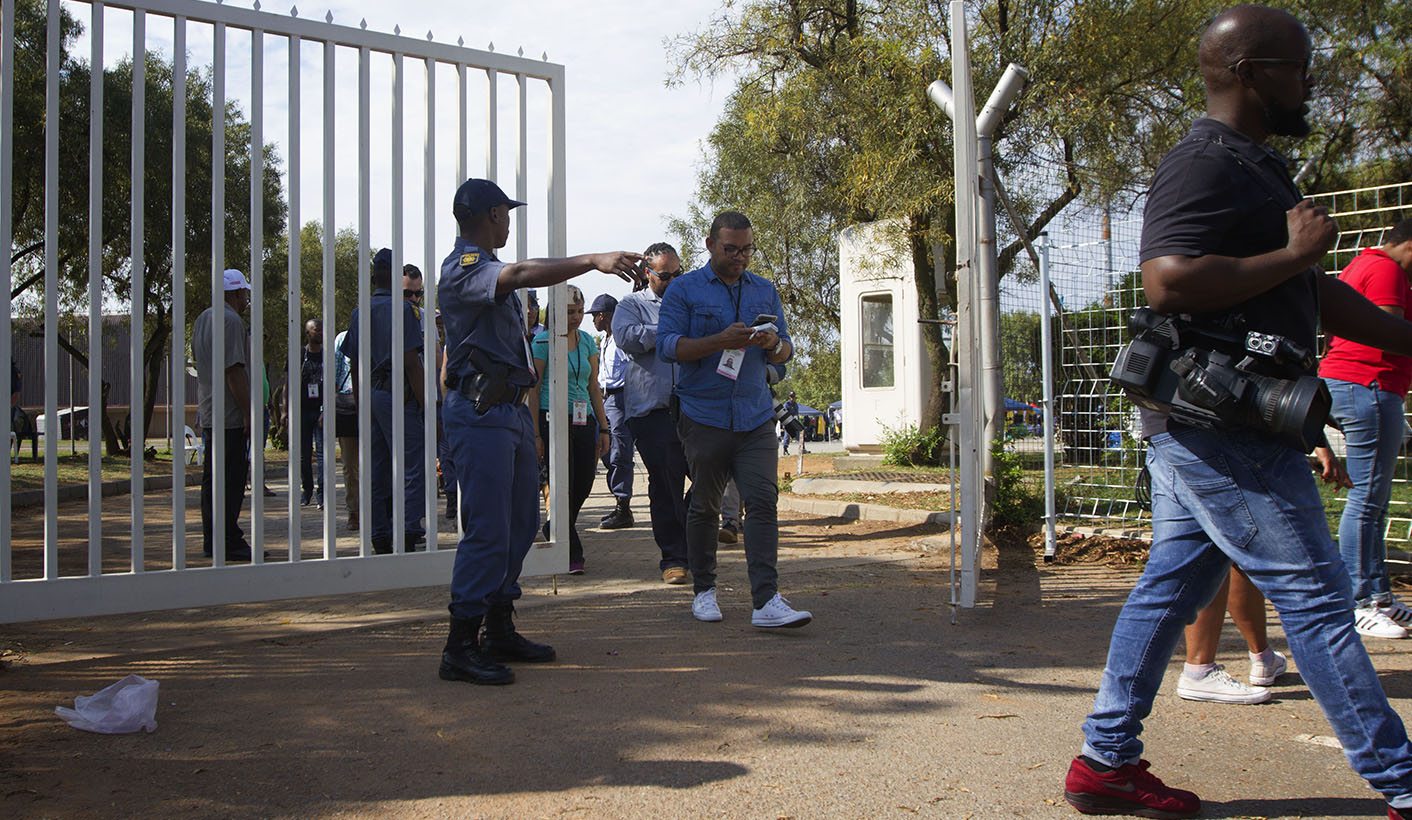 Cyril Ramaphosa’s first comments to the media after being elected ANC president weren’t defined by his plans to stabilise the economy, curtail corruption or unify the party. They’ll be remembered for the ANC’s securitised approach to dealing with the media. By GREG NICOLSON.

In his last days as secretary-general, Gwede Mantashe mentioned the Communist Party of China. The CPC holds a week-long congress every five years and bars all outsiders from attending. It sounded great, joked Mantashe, who has been stern but gracious towards the media.

Thousands of media workers were accredited to the ANC’s 54th national conference, in its fourth day in Johannesburg, but they’re spending most of their time fenced away from the over 4,700 voting delegates and are bullied and harassed by ANC security officials and the police for minor infractions of the party’s isolation plan.

At times, Mantashe’s comments don’t feel like a joke.

Accredited journalists have been vetted by State Security and are checked by SAPS when they enter the conference. With the exception of open plenary sessions, they are corralled into the media lounge because the party is paranoid about journalists speaking to delegates and accessing information under private discussion. This is despite security being placed at the entrance to the plenaries.

The ANC communications team has tried to be accommodating, but the limits imposed by their colleagues from the security team and the unpredictability of instructions from their political heads has led to ludicrous and abusive situations.

Newly elected ANC President Ramaphosa will make his first official public address as party leader while closing the conference on Wednesday, but on Tuesday the media were invited to see him tour the merchandise vendors and Progressive Business Forum stalls.

The venue was a few hundred metres away but instead of guiding journalists through the venue, the ANC decided it would take them outside where two minibuses were waiting to ferry them around the perimeter of the conference venue. Two minibuses, 150 journalists – a plan to keep journalists away from, well, it’s unclear what exactly.

Journalists marched back into Nasrec to get the ANC to make a plan. Keith Khoza, from ANC communications, negotiated that we could be walked through the conference venue flanked by security guards. During the negotiation, ANC security head Paul Langa said: “I don’t know democracy. I only know security.”

Ramaphosa’s tour of the merchandise vendors followed the normal script, with photojournalists surrounding him to see a clear picture past his bodyguards. They pushed back, forced the throng forward: the force and inappropriate physicality with female journalists so common that few now say anything about it.

The walkabout began with a successful move from the ANC comms team to organise the media. As Ramaphosa was visiting business stalls, journalists waited, staggered on steps so everyone could get a view. Frustrations grew as Ramaphosa didn’t appear and the sun beat down.

We only started talking about our collective experiences of security officials after South African National Editors Forum (Sanef) media freedom chair and Bloomberg journalist Sam Mkokeli was kicked out. Grievances streamed in on the WhatsApp group the ANC set up to inform journos.

“These include pictures which have been deleted, a journalist who was punched in the stomach, another journalist with prosthetic legs who was pushed down, and female journalists who have reported being inappropriately touched by marshals inside the plenary hall,” said Sanef chairperson Mahlatse Mahlase.

The wait dragged on and there was no word on when Ramaphosa would arrive. We were told we could not pose questions to the ANC president. We asked when he would come. Some journalists decided they wanted to leave, either to send a message that we should be treated better, or simply to return to meet deadlines.

At this event, leaving a press event isn’t as simple as it sounds. Mkokeli and a few others first decided they’d leave but the security officials said they could not walk unescorted. He said we could form a human chain if need be and not touch any of the delegates on the way back to the media centre. A security official told him he was causing anarchy. He confiscated Mkokeli’s accreditation and manhandled him out of Nasrec. Some journalists followed out of principle, others stayed.

Sanef later held a meeting with the ANC, which apologised for the incident and said it would try to return Mkokeli’s accreditation. The party also said members of the media had breached security protocol during the conference. “The ANC has requested journalists who’ve been ill-treated to report all incidents as soon as they happen so they can attend to them,” said Mahlase.

The party has increasingly treated journalists at the conference with disdain and mistrust. A senior journalist on Tuesday said the first time she remembered the media being so restricted was at the 2015 national general council and it’s continued since.

President Jacob Zuma said on Saturday, “We should also be mindful of the fact that media is an active participant, with vested interests, rather than impartial observers of the organisation.”

Zuma is a professional at playing the victim and inventing or over-emphasising the role of his critics to deflect attention. A key to his survival has been how he has empowered the security cluster and its institutions both to do his bidding and treat “enemies” with disdain.

Under Zuma’s leadership, South Africa has slipped further towards a securocratic state. The conference is merely a microcosm of what is happening in wider society. If there’s hope that Ramaphosa will reverse this trajectory, he might want to start by looking at what’s happening on his own doorstep.

At time of writing, Mkokeli was still exiled on the pavement outside Nasrec. DM