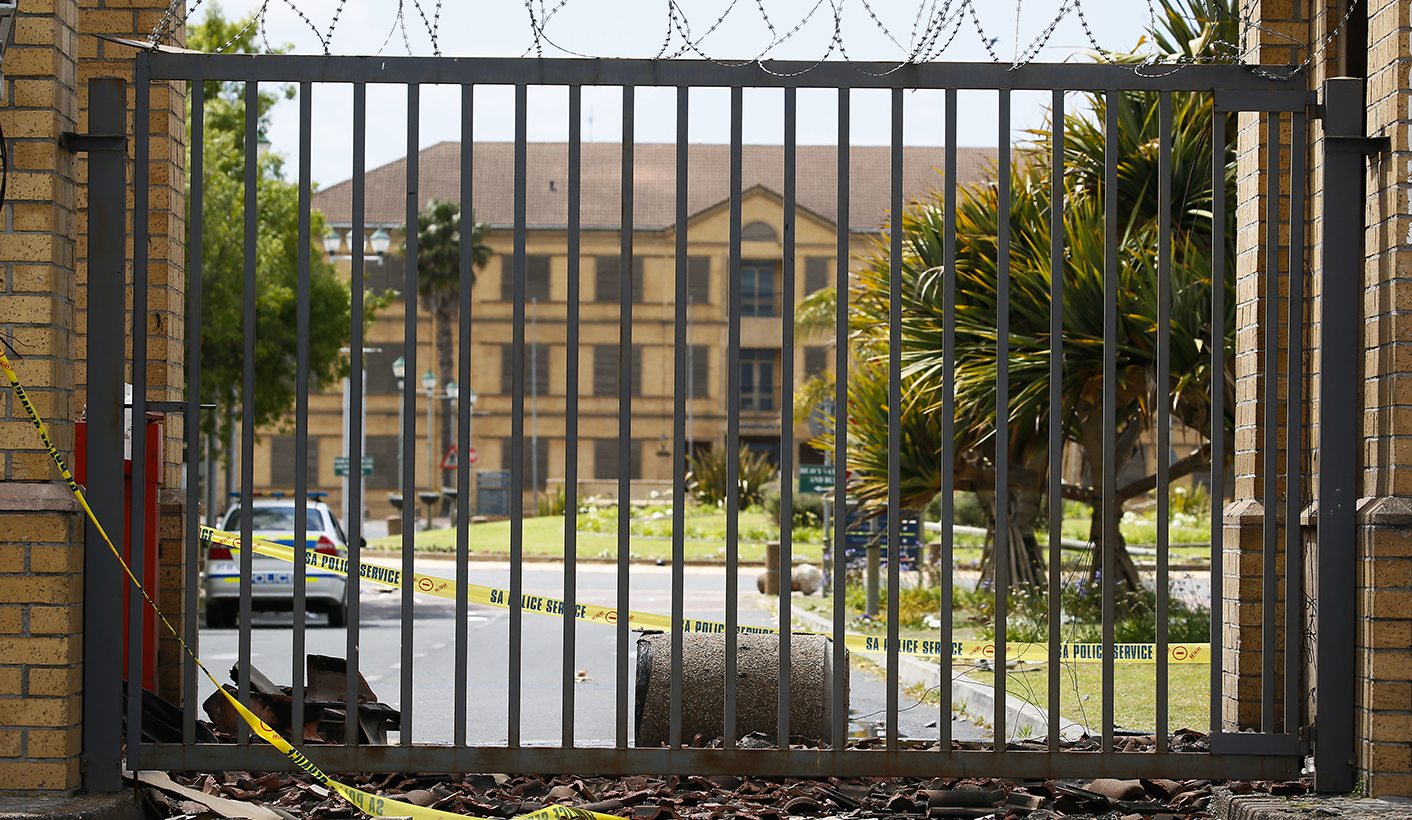 President Jacob Zuma made the both surprising and utterly unsurprising move on Saturday of releasing his response to the Heher Commission’s report on the Feasibility of Fee-Free Higher Education and Training. Despite the commission’s finding that there was at present no capacity for the state to provide free tertiary education to all students in the country, the President announced that government would subsidise tertiary education (how?) to some 90% of the country’s students. Spoiler alert: this has been met with incredulity and described by many – euphemistically – as a foolhardy idea. Not least because many of our tertiary students, once studying, are still floundering. By MARELISE VAN DER MERWE.

Fee-free education is one thing. But the announcement by President Jacob Zuma at the 54th National ANC Conference has raised some critical questions. Why announce it now? Why ignore the recommendations of the Heher Commission? Why ignore prior research? Why promise the plan would be fiscally sustainable when there is no real economic plan? And most crucially, why increase access without balancing access with better educational outcomes? The latter raises the question of who really stands to gain.

The President has, in one move, accomplished quite a feat: simultaneously gob-smacking supporters, detractors and fence-sitters. One could almost read the sub-text as a visibly uncomfortable Finance Minister Malusi Gigaba attempted to explain to media what “fiscally sustainable” meant, while emphasising that no details would be available until the Budget speech in 2018.

The chief bugbears, in short: The announcement has largely over-ridden the Heher Commission, which issued an over 700-page report suggesting various alternatives to providing free education to all students in need, including government-guaranteed bank loans. Other critics condemned the move as an attempt to hijack the conference, suggesting Zuma released the report strategically to ensure his preferred candidate would have a convenient election campaign angle. DA Shadow Minister of Higher Education and Training Professor Belinda Bozzolli called it “appalling” and “cheap politicking”. The EFF pointedly noted it as a victory for the Fees Must Fall movement, while raising an eyebrow at its lack of detail.

But regardless of the motive, the most important question is the outcome. Emeritus Professor on Education Ian Scott told Daily Maverick the announcement was “reckless” and the promised increase of university subsidies to 1% of GDP should leave citizens “very, very sceptical”.

In the absence of a detailed plan from the President, there was also a concern that the funds for student financial aid would be sourced from “soft targets”.

Asked whether he believed the provision of sponsored tuition and an increased subsidy would improve educational outcomes, Scott was doubtful. South Africa’s higher education throughput is notoriously poor overall, and is significantly lower among NFSAS students. A 2016 study on university through-put at six institutions found that just 36.9% of students had completed their degrees within four years. Additionally, universities are packed to over capacity.

Or to phrase it differently, has the President offered a short-term reprieve but ultimately thrown students under the bus?

Scott told Daily Maverick it was inadequate to simply remove financial barriers to access without considering improving educational outcomes at the other end. “Clearly financial access is extremely important,” he said. “Without that, there is no starting point. But to assume that financial access automatically leads to student success in higher education – which after all is the object of the exercise – is entirely pointless.”

To promise free education without allocating realistic budgetary plans in consultation with tertiary institutions – with more successful outcomes in mind – was “entirely irresponsible”, Scott added. At the moment, he said, many students emerge “with debt and not much else” because there are inadequate teaching and support structures at tertiary institutions. Scott does not think dealing with access-related problems only would have a major impact on current through-put figures.

Certainly many students have argued financial stress impacts on their studies. So doesn’t the promised subsidy increase, and the promise to construct and refurbish student housing, go some distance towards solving this?

In a word, no, says Scott. He argues there is “no evidence” that financial access to higher education alone will have a significant impact on the problem. He views the educational system as a pipeline, which means equal access to higher education institutions – when early childhood development, primary and secondary education provide an inadequate foundation for so many students – amounts to a band-aid on a broken leg.

That’s not to say it shouldn’t be done, but the entire pipeline must be fixed, and budget can’t be given to one at the expense of the other. Further, it also means if students have been educationally disadvantaged at primary or secondary level, they must be supported additionally at tertiary level to give them a fair chance.

Failure to do so, he said, could “have the perverse consequence of further advantaging well off people and shutting the door on those who have talent but are not getting the resources lower down”.

“In order to deal with the very difficult question of educational inequality and diversity, universities, in their day-to-day operations, must be resourced in a way that gives them a fair chance at dealing with these considerable problems,” he told Daily Maverick. “At first sight the agreement to increase subsidies looks absolutely right. If that could be achieved it could be a real step forward.”

But universities are progressively more under-funded, and already have more students than they can cope with. The subsidy, too, appears intended to cover the shortfall left by absent fee increases. Add to this the shortfall caused by major decreases in grants from the National Research Foundation (NRF) and the larger number of students likely to apply, and that 1 percent starts to look smaller. Universities are unlikely to have much left over for what they should be doing to improve outcomes, argues Scott. This being offering students who need it more psychosocial, material and academic support.

The latter is critical to reduce inequality in higher education, he says. “If (universities) don’t do something radical in terms of our mainstream teaching and learning processes, we can only expect similarly high rates of failure and non-completion. That is counter-productive.

“But my worry about that 1% is that I don’t think it is coming free.”

Whether the decision was entirely the President’s call or not is a further question. The Sunday Independent reported that the fees announcement – which would cost R12.4bn for 2018 alone – was in fact an ANC decision, not a Zuma decision. ANC national spokesperson Zizi Kodwa told the publication this from conference sidelines at the weekend, although it was also reported that the inter-ministerial committee had to talk an “obsessed” Zuma out of free education for all students.

Actually, Kodwa isn’t wrong. The party has had a long-standing goal to provide free education, and both the National Development Plan and the White Paper on Higher Education and Training set some ambitious goals on increasing uptake of students in tertiary educations – specifically, aiming for 1.6-million enrolments by 2030. Free education for students from poor families was also set as a target.

Meanwhile, a 2014 report by Universities South Africa on the funding models from 2015-2019 outlines in considerable detail the challenges facing higher education. The report argues that although from 1994-2013 there was an increase in state funding from R11-billion to R26-billion, this was nonetheless an “alarming (decline) in student per capita terms” – both in terms of budget and percentage of GDP. The report argued that since income for tertiary education institutions typically came from three streams – the state, fees and grants – this placed significantly more pressure on the latter two streams, which was unsustainable.

As is, universities and TVET colleges face separate challenges. TVET colleges have historically been critically underfunded, while for some of South Africa’s universities, dwindling resources have impacted research output or international rankings.

Earlier reports have one thing in common with both Zuma’s announcement and the Heher Commission: acknowledging that it is imperative to provide access to universities for economically disadvantaged students. Where Zuma’s announcement stands out is that it stumbles on sustainability. The President simply stated that the fee-free plan would be “fiscally sustainable”, when he had not yet cleared the details with the Minister of Finance or the Minister of Higher Education and Training.

Which leaves universities, students and the public hanging. Higher Education Minister Hlengiwe Mkhize has since said government is “considering a graduate tax.” National Treasury issued a terse statement simply saying it “note[d]” the announcement and was “in the process of reviewing the details, as well as possible financing options”. Tellingly, it described Zuma’s announcement as a “proposal” which would be “considered by the Ministers’ Committee on the Budget and the Presidential Fiscal Committee”.

But there’s no getting away from the possibility that Zuma’s trump card places both his successor and his colleagues in an unenviable position: either having to retract, make unwelcome amendments, or make the existing plan work. And should it go ahead, it is not guaranteed that greater access will add up to better educational outcomes. But by that time Zuma will be long gone.

Universities South Africa (Usaf) expressed its concern at the weekend, saying “key role players” were not consulted before the presidency released its statement. Wits’ Adam Habib said the university was consulted about no fee increase for families below the R600,000 threshold but that the free education for poor and working-class students was not discussed. “We need to clarify how the financing of free education would work,” he said on Saturday. “(There is an) urgent need for government to clarify with university stakeholders.”

The EFF, for its part, suggested via spokesperson Dr Mbuyiseni Ndlozi, a “war on tax evasion”. It recommended a pension fund education levy of 2.5%; an additional 1% on the 1% skills levy to bring it to 2%; increasing government contribution to 2% of GDP; and a 4.9% Corporate Income Tax earmarked for higher education.

The DA’s Bozzoli was worried that the entire proposal was “uncosted”. “This limited offer of ‘free education for the poor’ has not been financially feasible. It will inevitably entail an increase in the NSFAS budget by at least 100% – from the current R11-billion to about R22-billion. In fact, the number of students in this bracket is entirely unknown and this proposal probably entails an even higher number. It could bring the cost of NSFAS up to R30-billion,” she said.

She added: “We fear that this statement will cause more harm than good. It makes unsustainable and uncosted offers to students, raises expectations and fails to indicate that the huge bureaucracy needed to implement it is in place. We remain concerned that the start of the academic year of 2018 will entail turmoil and protest, and frustration on the part of students and the institutions that they attend.

“If the President wants to get serious about funding higher education, he needs to stop making politically expedient statements that he delays for his own benefit.” DM

Read our article on the Heher Commission report here

Photo: A view of the burned and damaged entrance to the Cape Peninsula University of Technology’s (CPUT) Bellville campus after it was torched overnight during student protests, South Africa, 12 October 2016. The student fees issue intensified across the country with most campuses closed. EPA/NIC BOTHMA