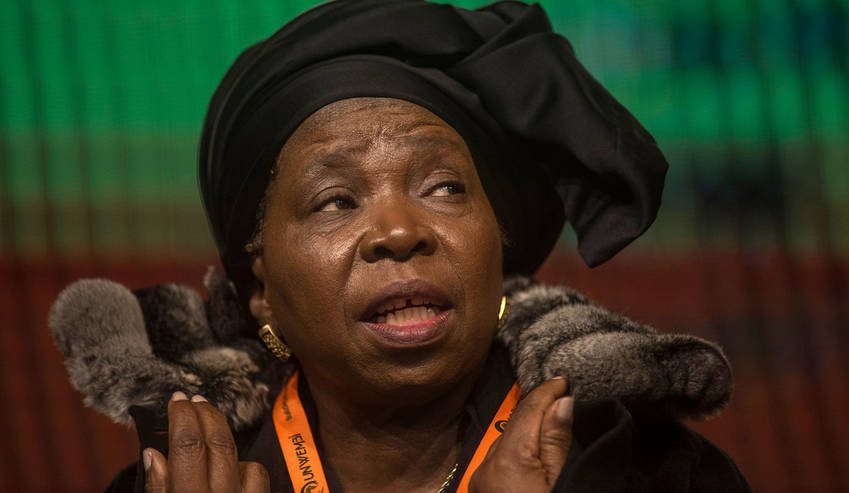 Accusations of vote-buying and dirty play have been flung about by both sides in the presidential race, with each side accusing the other of playing the dirtiest. Presidential candidate Nkosazana Dlamini Zuma, for one, believes she’s sold herself well enough not to have to buy votes, and said as much in her final campaign speech on Wednesday. By CARIEN DU PLESSIS.

It was a triumphant gala event, more like a celebration, a thanksgiving, and a highlight of sorts for Nkosazana Dlamini Zuma’s presidential campaign.

She might have been in Gauteng, but she was at an event organised by friends, by the ANC Women’s League, and hosted by Sinazo Masina, the gorgeous wife of her biggest supporter in the province – Ekurhuleni mayor Mzwandila Masina (who vowed to resign should Deputy President Cyril Ramaphosa be elected).

The troupe of school girls who started the event, reciting Dlamini Zuma’s biography and lines about the importance of education and development in South Africa, were the kind of kids South Africa wants as its future – cute as well as brilliant.

Erieka Bennett, a Ghanaian and founder of the Diaspora African Forum and someone Dlamini Zuma would have worked closely with, was also there to give her endorsement.

She said Africans in the diaspora “are looking to you, our brothers and sisters in South Africa, to make her the next president of South Africa. Don’t just do it for you, do it for us,” she said.

Then, after some more performances and songs, it was Dlamini Zuma’s turn.

She spoke about functionally illiterate Grade 4s and low economic growth rates as things that should change, and then got down to talking about the responsibility of branches to establish unity, and about the ANC’s 54th national conference that is kicking off this weekend at the Nasrec Expo Centre.

Unity is paramount, and the ANC must be the winner, regardless of the outcome of the election, she said.

“People are talking about the buying of delegates. We don’t need to buy delegates,” she said, in what might or might not have been a jab at Ramaphosa. Both sides have claimed that the other was trying to offer delegates money in return for their votes – an investment could be without returns, seeing that there is no way to prove which way a delegate voted.

Dlamini Zuma truthfully said she had campaigned in “every corner of this country”, addressing cadre forums, convincing ANC members, “so that when they elect us, they elect us out of conviction”.

“The delegates must elect leaders that are going to use the ANC not for factional battles, but as an instrument for the oppressed to make sure they can get into the mainstream of the economy.” Leaders that can help them get access to land, finance, education, she said.

Ramaphosa has been talking about clamping down on corruption and State Capture – and we all know his camp is referring to another camp when they talk about that, so perhaps this was another jab at him. No mention was made about the rather significant State Capture judgment earlier that day. In fact, President Jacob Zuma’s name wasn’t mentioned at all during the gathering.

Dlamini Zuma also spoke about land and the economy, saying according to the Freedom Charter South Africa belonged to all who lived in it. The land and the economy should belong to all, too. “We have got political freedom, we must now get economic freedom,” she said.

Dlamini Zuma isn’t generally known for laughing a lot, but there was a rare moment of humour when she told those at the dinner that the songs they had been singing in her praise, should not be sung at the conference – at least until after the election, she said, smiling. Diners laughed knowingly. The implication is that she will be winning the party election and that delegates could then sing her praises.

She said there shouldn’t be fights and disruptive behaviour should not be tolerated at the conference. It should be a “people’s movement”, she said. “We have a responsibility to defend, protect and propagate the values of that movement, but it is not ours, it belongs to the people,” she said. Members had no right to destroy the organisation, but they should defend the organisation inherited from their forebears.

Dlamini Zuma went on to thank the women’s league for choosing her.

After her speech, Dlamini Zuma left the hall for an interview, apparently with ANN7 as Mzwanele Manyi and that station’s political editor, Sifiso Mahlangu, were seen in the vicinity.

It was already nearing 10pm and gala diners were still waiting for food to be served, but not before Dlamini Zuma returned from the interview and ANC Women’s League president Bathabile Dlamini spoke.

She was all warm smiles, not her usual belligerent self at all. “We don’t want to leave Comrade Nkosazana on her own to laugh, because she can laugh,” Dlamini said, revealing some inside stories on how the campaign started, and on how Manyi came to them and said the campaign could not be run without a theme.

Dlamini Zuma also said the campaign should be “the work of the ANC”, and that campaigners “must not come up with anything that is not linked to the ANC”.

Dlamini Zuma was also initially concerned about how to get money for the campaign, Dlamini said, without revealing exactly how they eventually went about raising it. Dlamini Zuma, a principled one despite the VIP protection unit, also told them that, wherever they were going, “we must leave early so we don’t drive with speed”. Dlamini Zuma is known to be a stickler for time-keeping.

“When she is angry, she controls herself,” Dlamini said. Once, Dlamini Zuma was unhappy with the turn-out of a meeting in the Northern Cape (where it turned out, very few branches nominated her). The following day, however, she said she wanted to go back, because “even if there are only four people that support us there, they are enough”. This zeal is almost evangelical.

Last but not least, Dlamini thanked the campaigners, and also included Comrade Carl Niehaus, a self-confessed fraudster and spokesperson for the Umkhonto we Sizwe Military Veterans, who has seen the sins for which he was kicked out of the ANC eight years ago forgiven to play a key role in Dlamini Zuma’s campaign.

Dlamini said even though the media has attacked Niehaus (most recently there were revelations that he lied about his mother’s death to get out of debt), “we all make mistakes here, we are not perfect”. When someone owns up, “we don’t let them down”, Dlamini said.

Makes you wonder, if there’s such a disconnect about ethics in politics, whether leaders are truthful when they loftily express outrage about vote-buying. DM