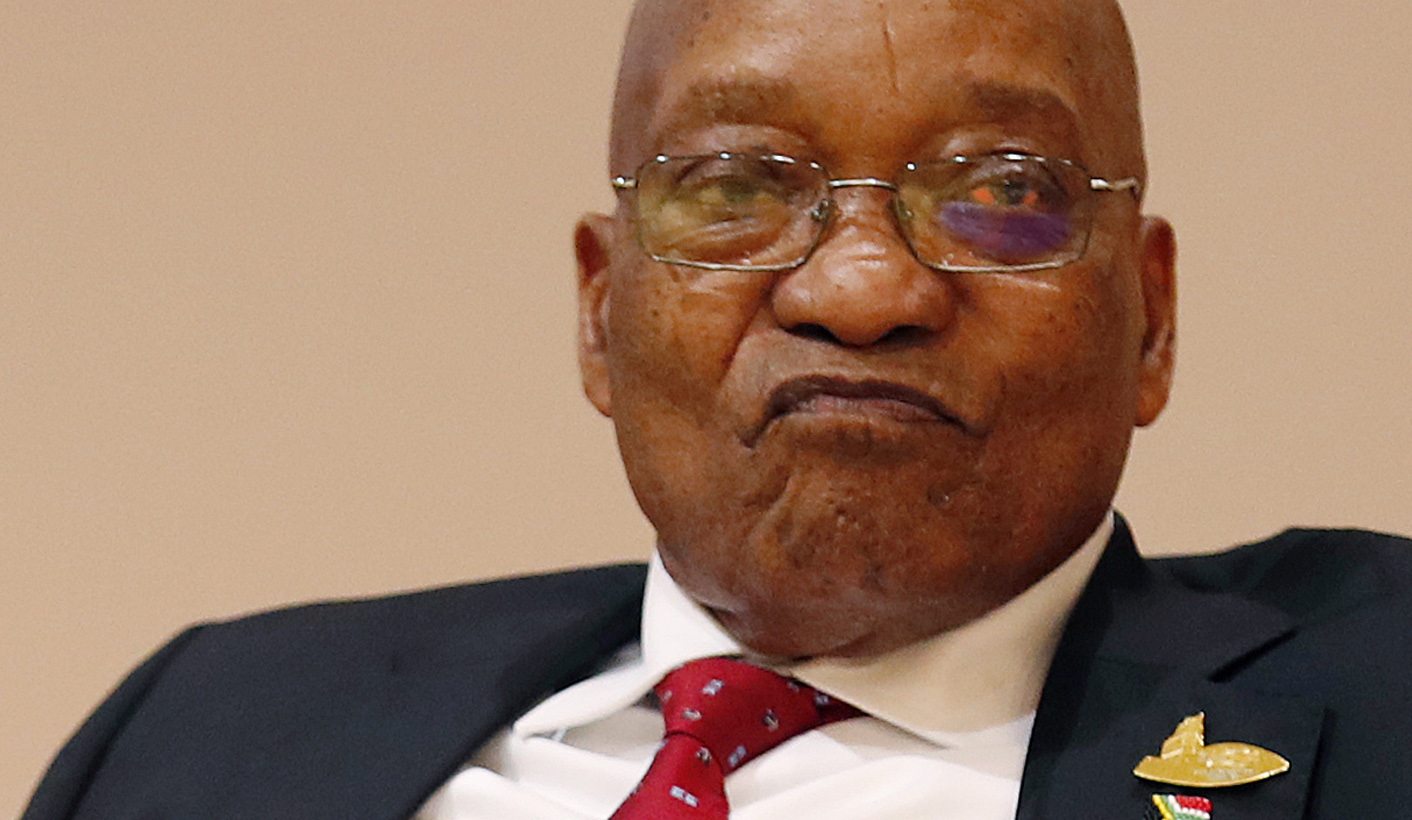 On Wednesday, Jacob Zuma became the first president of South Africa to be issued with a personal legal cost order. Twice over. This was delivered by the High Court in Pretoria, which has issued a stinging slapdown in three different court cases since Friday. In less than a week, Zuma was described as “reckless”, “unreasonable”, “grossly remiss” as a litigant with a “flagrant disregard” towards his obligations and, in two unrelated cases, too “conflicted” to fulfil his constitutional duties. By PAULI VAN WYK.

President Jacob Zuma’s power is not “an untrammelled” power that allows the president to act as he pleases, a full bench of judges in the High Court in Pretoria said on Wednesday. The 72-page judgment delivered by Judge President Dunstan Mlambo in Zuma’s attempt to review and set aside former Public Protector advocate Thuli Madonsela’s State of Capture report is a harsh reprimand. The court’s unanimous decision ratified the recommendations of Madonsela’s State of Capture report – recommendations that Zuma tried his utmost to challenge.

Zuma’s first attempt to interdict Madonsela releasing the report in October 2016 resulted in the first cost order against him, delivered just after 10:00 on Wednesday. Mlambo, also heading the panel of judges deciding over this case, said Zuma acted in “flagrant disregard” for his constitutional duties towards the Public Protector. It was therefore “an unwarranted instance for the taxpayer to carry that burden [to foot Zuma’s legal bill]. The conduct of the president, and the context of the litigation he initiated, requires a sterner rebuke…”

The second cost order against Zuma in his personal capacity was delivered around 12:00 in review proceedings attempting to set aside Madonsela’s recommendations. The judges instructed Zuma to institute a commission of inquiry to investigate State Capture within 30 days. This means that by Friday 12 January 2018 Zuma must establish a commission of inquiry.

Chief Justice Mogoeng Mogoeng – and not Zuma – will appoint the judge chairing the commission, and in turn the judge will choose his own assisting staff. The commission must further be well resourced, have all the evidence collection powers of the Public Protector and must provide their report with findings and recommendations to Zuma within 180 days. The report must be submitted to Parliament within 14 days. And Zuma shall bear the costs of the review application out of his own purse.

“The allegations of ‘State Capture’ detailed in the report are extremely serious,” the judgment reads.

“They amount to allegations that the president and members of the executive have exercised their powers, at least on occasion, not in the public interest as they are required to do under the Constitution, but rather at the behest of a private family and to further its financial interests. The Public Protector has made a number of damning allegations against the president.”

The court continued, finding that there is “compelling prima facie evidence [in Madonsela’s State of Capture report] that the relationship between the president and the Gupta family had evolved into ‘State Capture’ underpinned by the Gupta family having power to influence the appointment of Cabinet ministers and directors in boards of SoEs and leveraging these relationships to get preferential treatment in state contracts, access to state-provided business finance and the award of business licences”.

And then, reading from their judgment, Mlambo hammered the last nail in the coffin of Zuma’s attempt to wriggle free: “The president has a clear personal interest in the outcome of the commission [into State Capture]. The president is implicated in the State Capture report and is at the centre of allegations regarding the Gupta family’s involvement in the appointment of Cabinet ministers. Moreover, his son’s business interests are heavily implicated by the allegations regarding the award of contracts by SoEs to Gupta-owned businesses.”

The only way President Jacob Zuma’s week could be worse is if his Gupta-gotten gains were invested in Steinhoff shares. The court showed extreme disdain for the legal arguments offered by Zuma’s counsel, Advocate Ishmael Semenya SC and Advocate Anthea Platt SC. The judges dismissed every argument Zuma offered in an attempt to review and set aside Madonsela’s recommendations. The court ordered, for the second time in a week, that he was too conflicted in the hot mess created by himself and the Guptas to institute a proper commission of inquiry. His son Duduzane is in trouble, and so are his friends and alleged bankrollers the Guptas. They will be called before the commission of inquiry as witnesses. Their bank statements and cellphone histories will be scrutinised. Duduzane and the Guptas will have to act as witnesses and risk perjuring themselves if they tailor their evidence or fall back on their right to keep quiet. All of these options might point the finger right back to Zuma and his involvement in creating a parallel state that benefits only a hand-picked few.

The full bench of three judges further dismantled his now infamous Stalingrad strategy towards litigation and connected the dots between Zuma’s public conduct and his assertions before the court.

Zuma has long held in public and before Parliament that he will institute a commission of inquiry and that he looks forward to his day in court.

Mlambo noted Zuma’s press statement on 26 May 2017, saying it is “plainly evident that the president was not opposed to the implementation of the remedial action contained by the Public Protector’s State of Capture report…”

Zuma also told Parliament that “the president has taken a decision to establish the judicial commission of inquiry and is about to announce when it will start”.

Zuma’s public statements, however, are not compatible with his court actions, Mlambo said. In fact, his public statements “point to the reckless misconception underpinning the president’s application seeking to review and set aside the [Public Protector’s] remedial action. The review application was a clear non-starter and the president was seriously reckless in pursuing it as he has done. His conduct falls far short of the high standard expressed in Section 195 of the Constitution.”

This is but the middle of Zuma’s torrid week. On Saturday, the ANC leaders will congregate at the Nasrec Centre in Johannesburg to elect the party’s new leader. Zuma and his backers will enter the conference on the back foot.

Last Friday, another full bench of judges, again lead by by Mlambo in the High Court in Pretoria, also kicked prosecutions boss Advocate Shaun Abrahams out of his job, saying his appointment was irregular.

The court held that Abrahams’ predecessor, Mxolisi Nxasana, irregularly accepted Zuma’s proposition of a R17.8-million golden handshake (the court stopped short of labelling it a bribe) to leave his position as National Director of Public Prosecutions (NDPP). The court said Zuma was too conflicted to pick a new NDPP and ceded the job to the deputy president (Cyril Ramaphosa, at the moment).

Within three hours, Zuma released a hastily drafted statement saying he would appeal the judgment. Before day’s end on Friday, Abrahams also filed a formal appeal in a move widely regarded as an attempt to stop Ramaphosa from making an immediate appointment.

On Wednesday afternoon the DA vowed to lay criminal charges of perjury against the “grossly remiss” Zuma for a “sinister attempt to mislead the courts, abuse judicial process and ultimately undermine the law and the Constitution of the republic”.

DA leader Mmusi Maimane labelled the review judgment an “important victory for the rule of law, and the people of South Africa”.

The ANC’s statement was curt and did not deal with the merits of any of the three cases. It rather chose to throw its weight behind the institution of a commission of inquiry and seems to not be in favour of another appeal.

“We therefore trust President Jacob Zuma will implement this judgment without delay in the interest of our country,” the statement says.

Cosatu’s statement was more to the point, saying “hopefully [Zuma] now better understands the limits of his own powers and the principle of separation of powers in general”.

Cosatu also welcomed the cost order against Zuma: “The president has become a vexatious litigant with a penchant of using taxpayers’ money without care on these many cases. Cosatu calls for the State Capture inquiry to be set up soon so that the thieves and the swindlers who have stolen from the poor can be sent to jail where they belong. We also urge ANC delegates to the 54thNational Conference to elect Cde Cyril Rampahosa, leader with a clear commitment to fight both State Capture and corruption.” DM

Cricket SA Board all out, but what next?