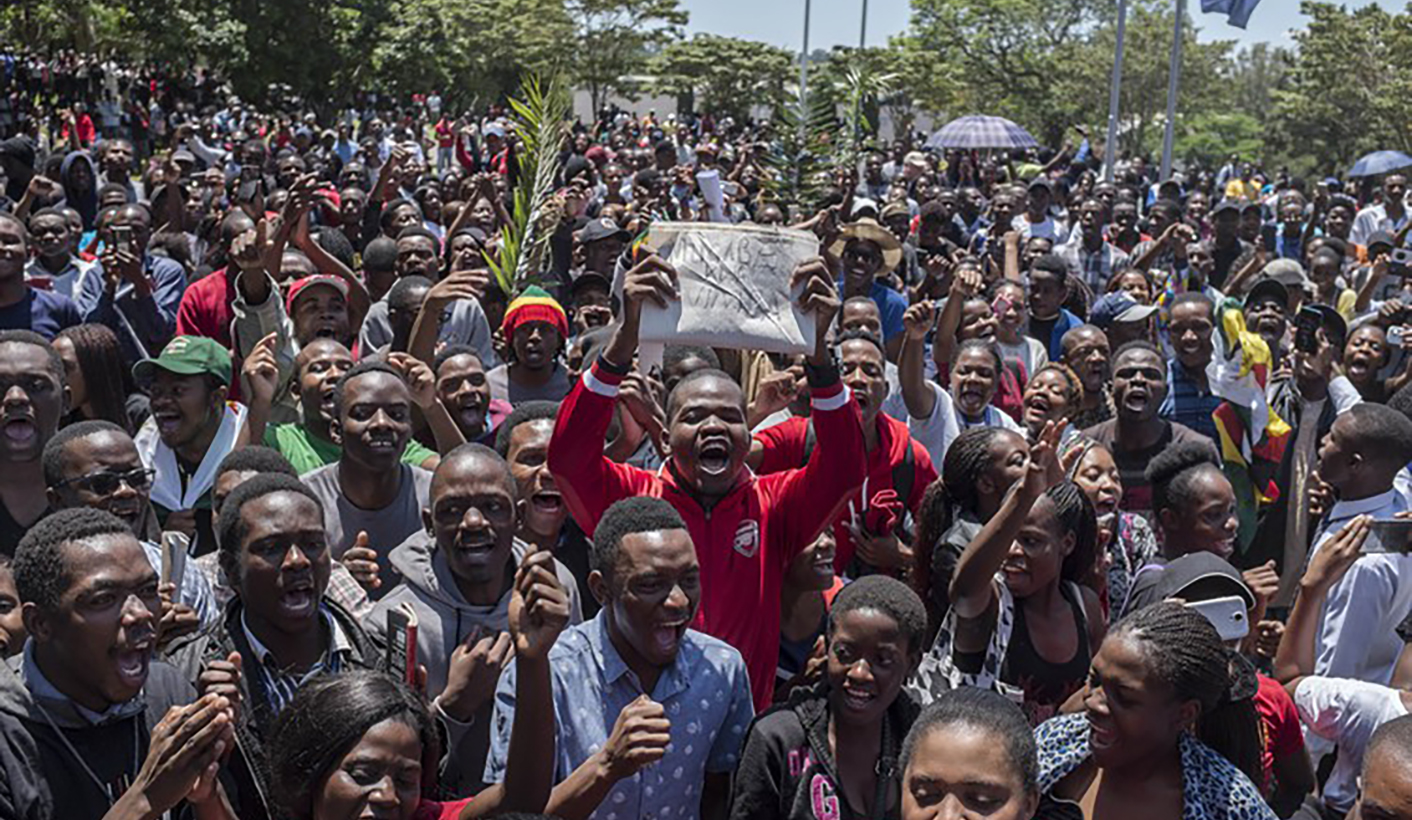 Students call for President Robert Mugabe and Vice-Chancellor Levi Nyagura to step down. By GROUNDUP reporter.

Students at the University of Zimbabwe shut down their institution on Monday, demanding the removal of President Robert Mugabe.

From early morning students gathered at a vacant parking lot where members of the current SRC were joined by previous student leaders. They began mobilising students. By 10am the crowd had swelled and students began blocking venues while others refused to sit for their end-of-year exams in protest against Mugabe’s refusal to resign from power.

Former SRC President Ostallos Siziba, who now works as an activist with the Tajamuka social movement, climbed on top of a high wall and addressed thousands of students. The university had previously given Grace Mugabe a PhD even though students claim she did not study for one and was undeserving of receiving the degree.

“When I was the SRC President, Vice-Chancellor (Levi) Nyagura decided to give Grace Mugabe a PhD. I told him then that we would come back for you. Today is that day. Comrades, I declare this university ungovernable,” said Siziba as students cheered his remarks.

The large group of students, some waving anti-Mugabe posters, marched towards the main university library and demanded that all inside join them in voicing their demands that Robert Mugabe step down and that the PhD awarded to Grace Mugabe be annulled.

Outside the library the group sang the national anthem and continued singing songs demanding that Mugabe and the vice-chancellor step down.

Treasure Basopo, an economics student, said he would like to see a Zimbabwe where there was economic and social justice. “We are concurring with the military and war veterans and saying that Mugabe must go,” said Basopo. He also said that students were echoing the demands of students in South Africa and calling for free education. He accused the vice chancellor of oppressing students and of being a Mugabe stooge who used the university to fight factional political battles in favour of Mugabe and his wife Grace.

Students made their way to the vice-chancellor’s office where they began moving closer and closer to the main entrance. They did a countdown and wanted to charge into the office but the student leadership stepped in and calmed the crowd. A student leader appealed for restraint and reminded students that the protests must remain peaceful at all times and that no university property must be damaged. Other students began forming a human chain around the entrance to the vice chancellor’s office to prevent any sort of violence. The university security stood back and watched and no police were visible as the police commissioner, who is a Mugabe ally, has not been seen in public since last week’s coup.

Student Nicholas Mpofu said that Mugabe should go as he has failed to implement proper policies causing widespread economic hardship. “This is a tuck-shop economy. Graduates are failing to secure jobs. We call on him to step down with immediate effect,” said Mpofu. “When Mugabe went to war they were young like us. We are also fighting now, but we are not fighting with guns because we are in the 21st century where we have to fight with our intellectual capacity.”

Photo: Students at the University of Zimbabwe protest outside the offices of Vice-Chancellor Levi Nyagura, as they shut down the institution.