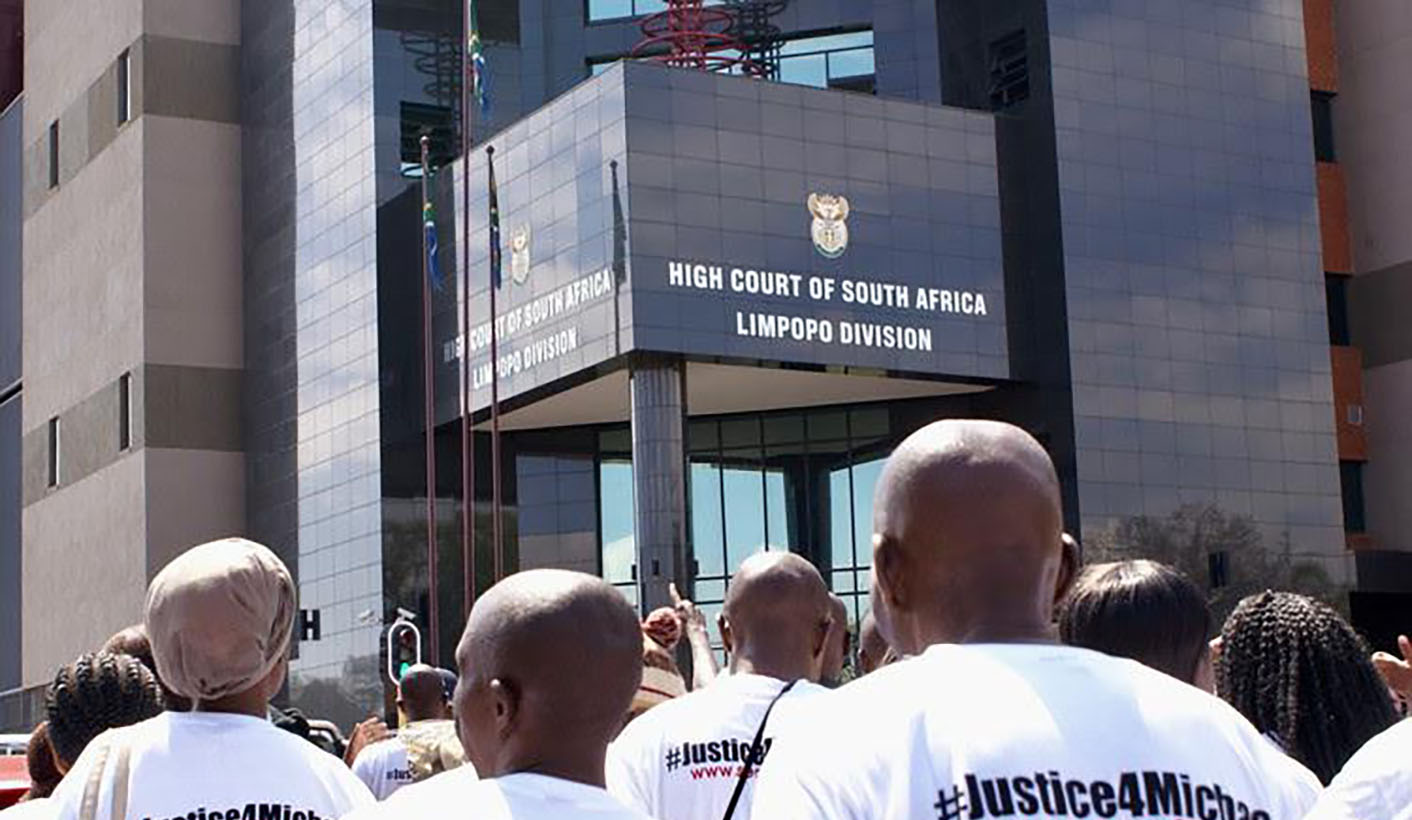 Michael Komape’s sister broke down in court on Wednesday. By Ciaran Ryan for GROUNDUP.

The forensic pathologist who examined the body of Michael Komape described in graphic detail how he found evidence of faeces in the boy’s lungs. Five-year-old Michael drowned in a pit toilet at his school near Polokwane on 20 January 2014.

Dr Kwena Matlala was giving evidence on day three of the case in the Polokwane High Court. The Komape family is suing the state.

Matlala said he found the body dressed in wet and dirty clothes, consistent with someone who had been retrieved from an open pit toilet. He also found maggots on the body, which was to be expected from someone exposed to the contents of a toilet.

The forensic report, which was completed two days after Michael drowned, noted that the body was not yet decomposed, and that there was “frothy blood” around the mouth. Asked by Advocate Nikki Stein, representing the family, to explain what this meant, Dr Matlala said the presence of blood around the mouth signified hypoxia – or oxygen deprivation – while the froth was produced by water in the lungs.

Michael’s stomach was distended, and a greenish-blue and foul-smelling substance was found in the stomach and oesophagus (throat area) that “was consistent with the contents of a toilet”.

Dr Matlala was unable to determine the exact time of death. This was because the body had been placed in a fridge after being removed from the Mahlodumela School in Chebeng Village, outside Polokwane. Decomposition normally sets in within eight hours of a body dying.

Abrasions and “nibbles” were found on parts of the skin, suggesting infection by insects after death. There was also a lesion around the liver, though this was the result of parasites and was not related to the death.

Michael’s death was marked as “unnatural” and the cause was given as drowning.

Before Matlala’s testimony, Charles Malebana, who took smartphone pictures of the school pit toilets before they were demolished, took the stand. He explained how he arrived at the school with the boy’s father, James Komape, and started to take photos of the toilets. He was apprehended by a police officer in the company of school officials and told to delete the photos. The police officer told him he would get into trouble for entering government property and taking photos without permission. A school official deleted the photos. On hearing this, an angry James Komape asked Malebana to take more photos, and this time to hand the phone over to him so they could not be deleted.

These photos were presented in evidence at court. The state advocate attempted to argue that a death is normally considered part of a crime scene, but the judge cut him short, saying he was not aware of any clause in the Criminal Procedures Act preventing anyone from taking photos. Counsel for the family, Advocate Vincent Maleka, added that police frequently rely on photos taken by the public to help solve crimes.

“I’m not insinuating that [Malebana] interfered with a crime scene or the integrity of a crime scene,” replied Advocate Simon Phaswane for the state.

The final witness of the day was Lydia Komape, the eldest daughter. She broke down in tears on several occasions as she was asked to recount the events of 20 January 2014. At one point the judge allowed a brief adjournment so she could compose herself. She explained that she was extremely close to Michael and spent most of her time with him, sharing the same room and bathing him before he went to school.

In the afternoon of 20 January 2014, while attempting to gain entrance to a training college in Polokwane, she said, she had received a call from her mother that Michael had fallen into a toilet. She rushed home by taxi, refusing to believe that he was dead. When she arrived at the school, she found his body stretched out and covered. She removed the cover to make sure there was no mistake. She broke down as she recounted this part of the story.

There has been a dispute for the past three days over whether the national or provincial education departments provided any support for the family after Michael’s death. Phaswane asked Lydia whether she knew that the local MEC for Education had attended the funeral, and that the department had contributed to the funeral expenses.

In response, Advocate Stein pointed out that it was not until October 2017 — more than three years after Michael’s death and shortly before the court case was due to start — that the department made an offer to settle.

The family rejected the R450,000 offer. They are seeking nearly R3-million in various claims against the state.

The trial continues on Thursday. DM

Photo: People protest outside the High Court in Polokwane in support of the Komape family. Photo: Ciaran Ryan