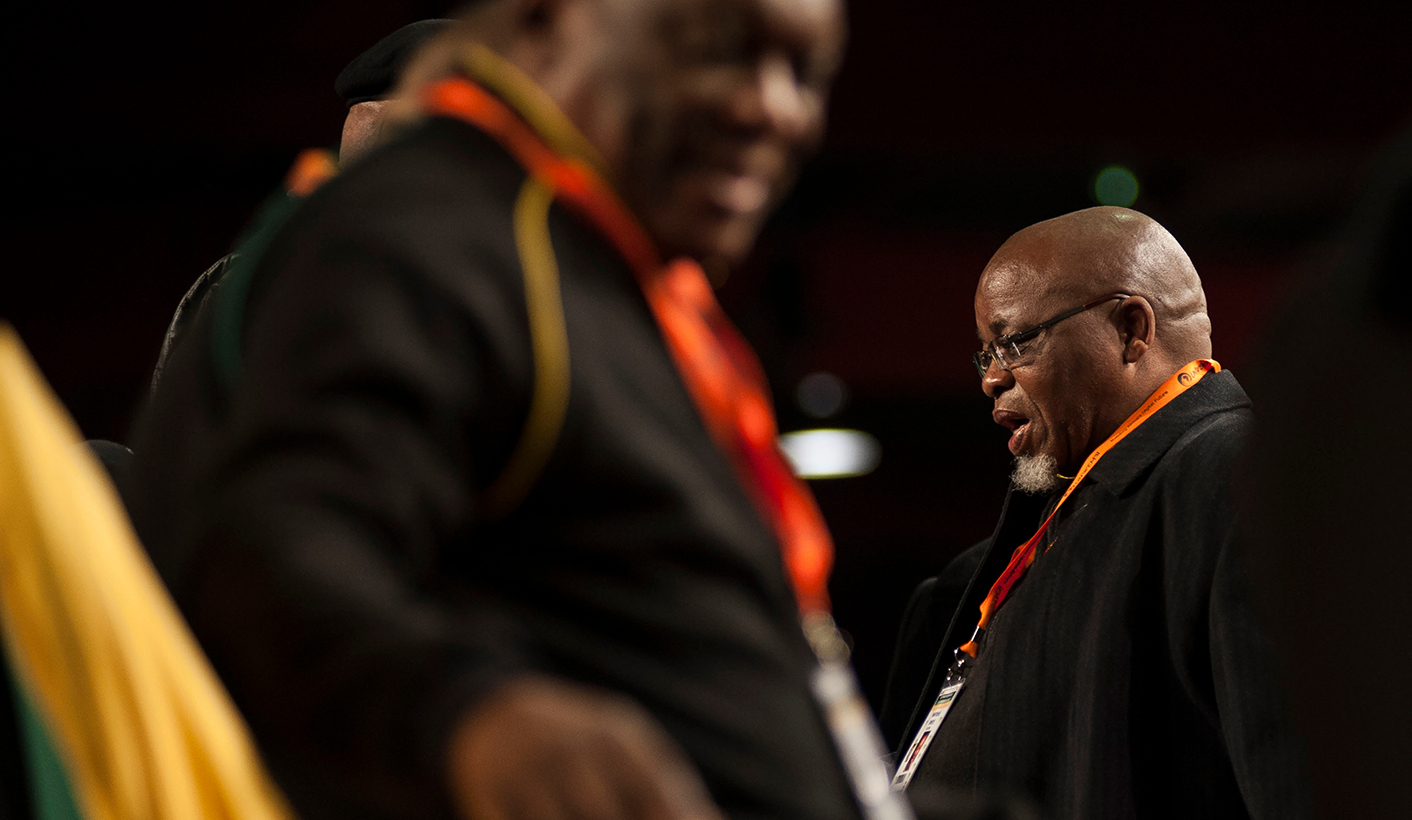 Fierce debates raged in the ANC’s national working committee meeting over the weekend as the camps supporting ANC MP Nkosazana Dlamini Zuma and Deputy President Cyril Ramaphosa vied for control ahead of the party’s national elective conference in just over a month’s time. Meanwhile, on the ground in the “Premier League” provinces, an interesting story unfolds. By CARIEN DU PLESSIS.

Late on Sunday morning, the ANC’s national leaders took a break from their rather difficult meeting. On the agenda was progress in preparing for the party’s national conference to be held at the Nasrec Expo Centre, Johannesburg, as well as complaints about the Eastern Cape’s provincial conference at the beginning of October. Described by Deputy President Cyril Ramaphosa as a “festival of chairs”, the violence-marred East London conference saw the camp sympathetic to him winning. The camp that wants ANC MP Nkosazana Dlamini Zuma as president pushed back over the weekend. It is reported that they were planning to go on the attack about other issues too, such as Ramaphosa’s public announcement of his running mates, which is not a convention in the ANC.

@Power987News tweeted on Sunday that ANC Secretary-General Gwede Mantashe was attacked in the meeting for his actions at the Eastern Cape conference, as well as his pronouncements on the KwaZulu-Natal appeal. Some NWC members argued these show he was biased and should be suspended.

Mantashe initially said a September court ruling that the current KwaZulu-Natal leadership (they are in favour of Dlamini Zuma) were elected at an illegal and void 2015 conference should not be appealed, but he was later overruled by the province and the NEC.

The Sunday Times remarked that former ANC secretary-general Kgalema Motlanthe similarly came under attack from supporters of former president Thabo Mbeki in one of the final NEC meetings before the 2007 conference.

Early on Monday rumours started doing the rounds about what was happening in the special NEC meeting. On a message of uncertain origin, signed by #Ramaphosa4President and apparently circulating in Ramaphosa Whatsapp groups, it said: “There was havoc in today’s NEC as there were some people calling for the removal of Cde Gwede Mantashe. It was fueled by Fikile Mbalula. This is  a tactic to ensure that there is rigging in the December Conference.”

The message said there were calls to replace Mantashe with his deputy, Jessie Duarte.

“This will open a door for NDZ to emerge victorious through rigging meaning Guptas & [President Jacob] Zuma will be let scott (sic) free. Clearly we can now see that Mantashe is being attacked because he has reiterated that Ramaphosa must be President.”

The message said the NEC would take a decision about it on Monday.

ANC spokesperson Zizi Kodwa, in a move that’s unusual but shouldn’t be in the age of social media, released a statement saying there were “false, malicious, and mischievous reports being peddled about the proceedings” of the special NEC meeting.

He said the ANC “unequivocally dismisses” these claims that Mantashe was to be removed.

“These rumors are peddled to sow confusion and division within the movement and are indicative of the media’s laziness and total disregard for proper journalistic ethics in favor of populism and sensationalism.”

The special NEC resumed on Monday, he said, after the NWC’s meeting over the weekend during which it “refined” the report presented to the NEC about the Eastern Cape’s disputed conference as well as Mantashe’s organisational report to be presented to the December conference.

In what could possibly be a waste of his breath with about a month to go to the highly-contested ANC conference, Kodwa added:

“The ANC calls upon its members, supporters and South Africans at large to resist and reject the frenzy of fake news peddled by so-called insiders and analysts and rather await formal communication from the NEC on the outcomes of this Special NEC.”

Mantashe, who appears on Ramaphosa’s slate and who is central to the administration of the party processes in the lead-up to the conference, has obviously been a thorn in the flesh for some.

On the ground, the battle in the branches, too, continued over the weekend. On Saturday, before the start of the meeting, Mantashe said that about half of the branches had had their meetings already.

Considering that it’s about three weeks into the meetings and there were only five days left, this isn’t a great figure. It’s believed that, for the conference to happen, 70% of branches must hold meetings to nominate candidates for the leadership and choose delegates for the conference. It’s not clear what would happen if the threshold was not reached.

If this is true, however, it could spell trouble for Dlamini Zuma’s camp. Here’s why:

In provinces where strong support is expected for Dlamini Zuma, like the Free State and North West, and maybe even Mpumalanga, meetings have been slow to happen. Figures also show these provinces have larger branches than the other provinces, and might experience difficulty in forming a 50% plus one quorum.

In the past, processes were a little more open to manipulation, but Ramaphosa campaigner and former North West deputy chairperson China Dodovu in a recent Facebook post said branches in North West were bigger than ever, but, “given the tight guidelines such branches are failing to quorate … there is little scope for rigging and manipulation”. Previously, it is said, branch leaders would go from house to house to get members to sign the attendance register to pretend they were at the meeting.

Mantashe, as process administrator, would have played a part in tightening up the processes.

Dodovu also says more than half the branches in North West have more than 1,000 members, but this assessment seems exaggerated. In North West, 352 branches have passed the audit, and they are entitled to send 538 delegates, about 1.52 delegates per branch. If Dodovu’s claim were true, half of the branches would be entitled to more delegates than the total allocation for North West, assuming that a branch of 1,000 can send at least four delegates (one for the first 100, and then one for each 250 additional delegates).

Dodovu speculates that there might be a deliberate strategy behind the delay in the branch meetings of the “Premier League” provinces. “It will be very interesting to see how the (branch meetings) will be ‘fast-tracked’ in the North West and Free State especially,” he wrote.

Analyst and former ANC MP Melanie Verwoerd also wrote about this in her recent column, speculating that the Dlamini Zuma camp could probably be delaying their branch meetings to see which way the wind was blowing for the Ramaphosa branches – which is pretty favourable so far.

If enough branches – say more than 30% – don’t hold their required meetings before Wednesday, they could hold the conference to ransom, and this could give the Dlamini Zuma camp leverage to either delay the conference, or negotiate certain processes or outcomes in their favour.

Mantashe, however, at the start of the weekend meeting, said the December conference would go ahead as planned. It is considered to be better for stability in the country and the economy, as well as the ANC, if it does.

The disagreements that brought the weekend meeting to a standstill were therefore likely to have been informed by the interests of these two camps. It also points to the possibility of a December conference that will be highly contested on every possible technical point. DM