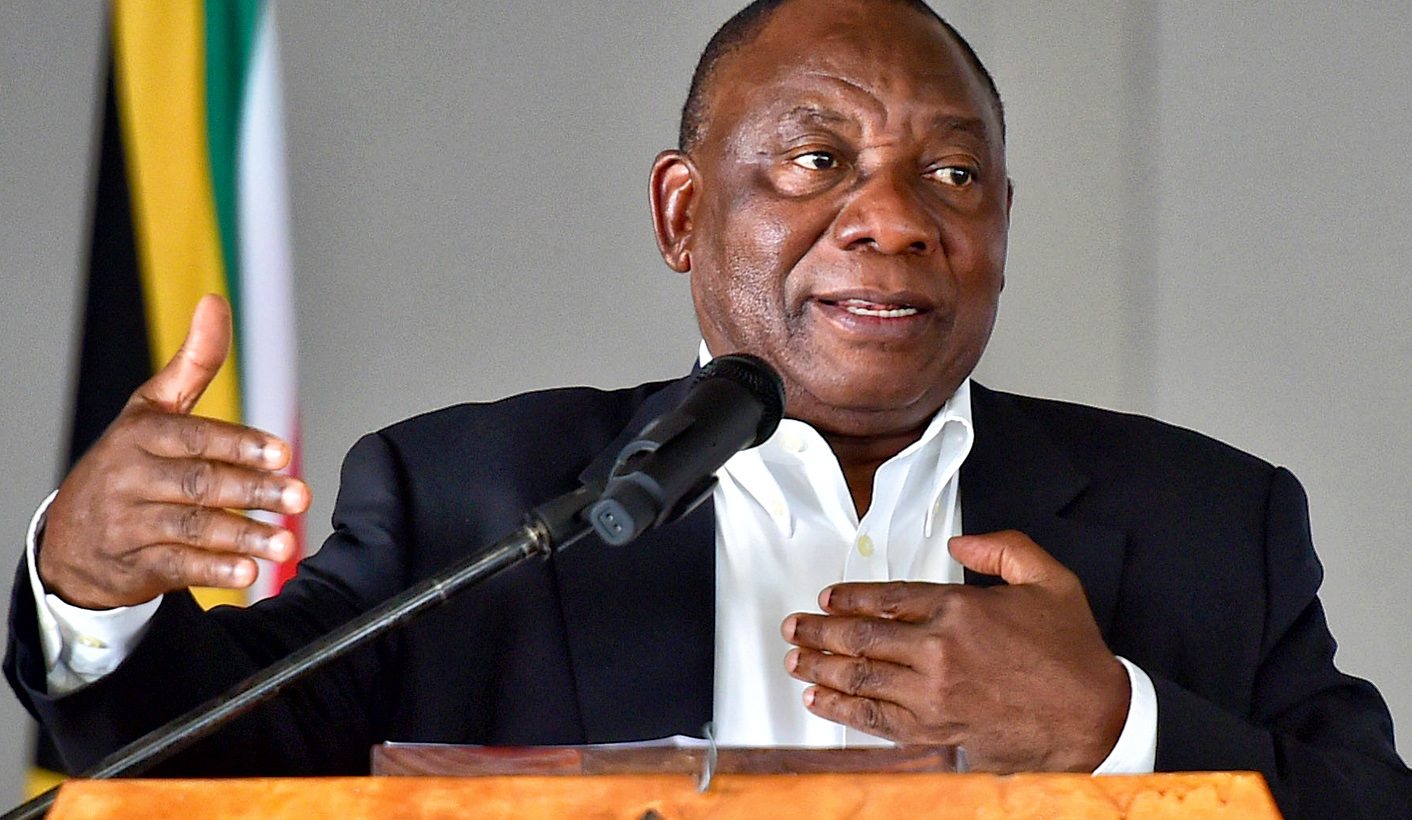 Deputy President Cyril Ramaphosa at the weekend continued his recent streak of venturing into party-political no-go provinces by addressing meetings at North West University in Potchefstroom and a cadres’ forum in Mahikeng. Luthuli House sent out an official press release about his activities, but the party leadership in the province was fuming. What exactly is going on here? By CARIEN DU PLESSIS.

Last week Deputy President Cyril Ramaphosa’s campaigners blew out of the water an impending smear of him allegedly having been a Central Intelligence Agency or MI5 spy – and added he would go the way of former higher education minister Blade Nzimande, axed in a Cabinet reshuffle. On Thursday Ramaphosa told the National Assembly he served at Zuma’s pleasure, and by Friday the jitters were so real that the currency dropped.

On Saturday, however, it was back to normal campaign mode for Ramaphosa at North West University in Potchefstroom, meeting first with businessmen and farmers, and then addressing the main event, an OR Tambo lecture organised by the South African Students’ Congress, who invited him to the province and who received #Siyavuma campaign T-shirts for their trouble.

Wesvaal Chamber of Business members heard from him about (radical) economic transformation – making the economy inclusive and getting land redistribution right – and rooting out corruption at State-owned Entities.

He even threw some scraps to journalists by saying South African “criminal investigation agencies, the Hawks and the NPA [National Prosecuting Authority] must now get down to work and start investigating [the #Guptaleaks as the FBI has said it is doing] because we don’t want to be put to shame by what others will do when the problem originated here”.

He also let slip that he spoke to Nzimande before coming to the university, presumably to get the lowdown on higher education issues. “We were commiserating about his situation,” Ramaphosa laughed after he failed to prefix Nzimande’s title with “former”.

A day before Ramaphosa’s visit, ANC provincial secretary Dakota Legoete distanced the ANC in Bokone Bophirima (what the party calls North West) from this visit and said they would not take part in it.

“As a self-respecting movement we don’t want to set a wrong precedence (sic) for our Presidential hopefuls of undermining the ANC’s constitutional structures,” it continued, adding that Ramaphosa, as a citizen, “can of course visit any area of the country he chooses to.”

“ANC Bokone Bophirima is just not part of the plans or the programme as a host or in any supportive role.”

In May Ramaphosa experienced the wrath of a provincial leadership when he was invited by an ANC branch to a cadres’ forum. The province told him he was ill-disciplined.

Ramaphosa wisened up and just over a week ago it was the Young Communist League – like Sasco, a structure that doesn’t answer to the ANC’s provincial leaders – that invited him to speak there.

Ramaphosa’s North West meetings were neither attended nor disrupted by the provincial leadership, not even in Mahikeng, the seat of the provincial government. In their books, the events that hosted the ANC deputy president simply didn’t exist.

The province’s snubbing of Ramaphosa plays into the narrative created by the alleged pending intelligence report that he’s a CIA spy for western capitalists. It depicts him as alien to the organisation and an outsider. In ANC circles this is a sin possibly bigger than corruption. In the next few weeks the mud-slinging against him could get a lot messier.

Already, on Saturday, a text message purporting to come from Ramaphosa (but which clearly does not) was doing the rounds, describing the supposed charges against him. The first, it says, is that Ramaphosa wants to cut links with Russia if he became president, supposedly plotting with a white businessman who has a beef with President Vladimir Putin. The second, it says, is Ramaphosa got money from “western interests” to fund “the MacDonald transaction”.

Already supporters of fellow presidential contender, ANC MP Nkosazana Dlamini Zuma, are saying that those who are even raising the possibility that the ANC could lose the 2019 elections were siding with the opposition. (Many Ramaphosa supporters are saying they do not believe the party could win an election with Dlamini Zuma at the helm.)

Ramaphosa’s success in the trade union movement and subsequently in business is also viewed with suspicion in the party.

ANC leaders in the Northern Cape, Eastern Cape, and on Saturday also Gauteng, have declared their support for Ramaphosa. Even though the branches will do the voting at the conference, the power broking ahead of the party’s December elective conference is done in a big way by the provinces. The alliance partners are a spent force.

Saturday’s Sasco crowd contradicted the province’s official stance. When asked why they didn’t follow the provincial line in supporting Dlamini Zuma, the line of most who attended was: “She is the choice of the [provincial] leadership, but we don’t all agree.”

Two 50-something ANC Women’s League members from nearby Jouberton said: “We don’t want NDZ here. We are tired of Zuma and the Guptas.” They reckon Dlamini Zuma’s association with her ex-husband and father of her four daughters was still too strong.

A group of matric pupils from Klerksdorp, encouraged to attend by their English teacher, who organised a bus for them, said they weren’t party members and weren’t even sure if they would vote in 2019 at all. But they were curious to hear Ramaphosa. “I don’t trust politicians,” one of the girls said.

They confessed they couldn’t hear much of the speech, because the buzz in the audience got too much. Ramaphosa is an engaging but not a rousing speaker, and some audience members looked and smelled inebriated.

Provincial Ramaphosa supporters were buoyed, however. They have made a list which puts Ramaphosa’s support in North West at just under 50%, but nationally in the provinces at 62%. Truth is, however, with branch meetings still continuing, it’s nigh impossible to put a figure on it as yet. DM