Parliament’s Eskom Inquiry: Molefe pension – instructions from above accepted without question, rules or no rules 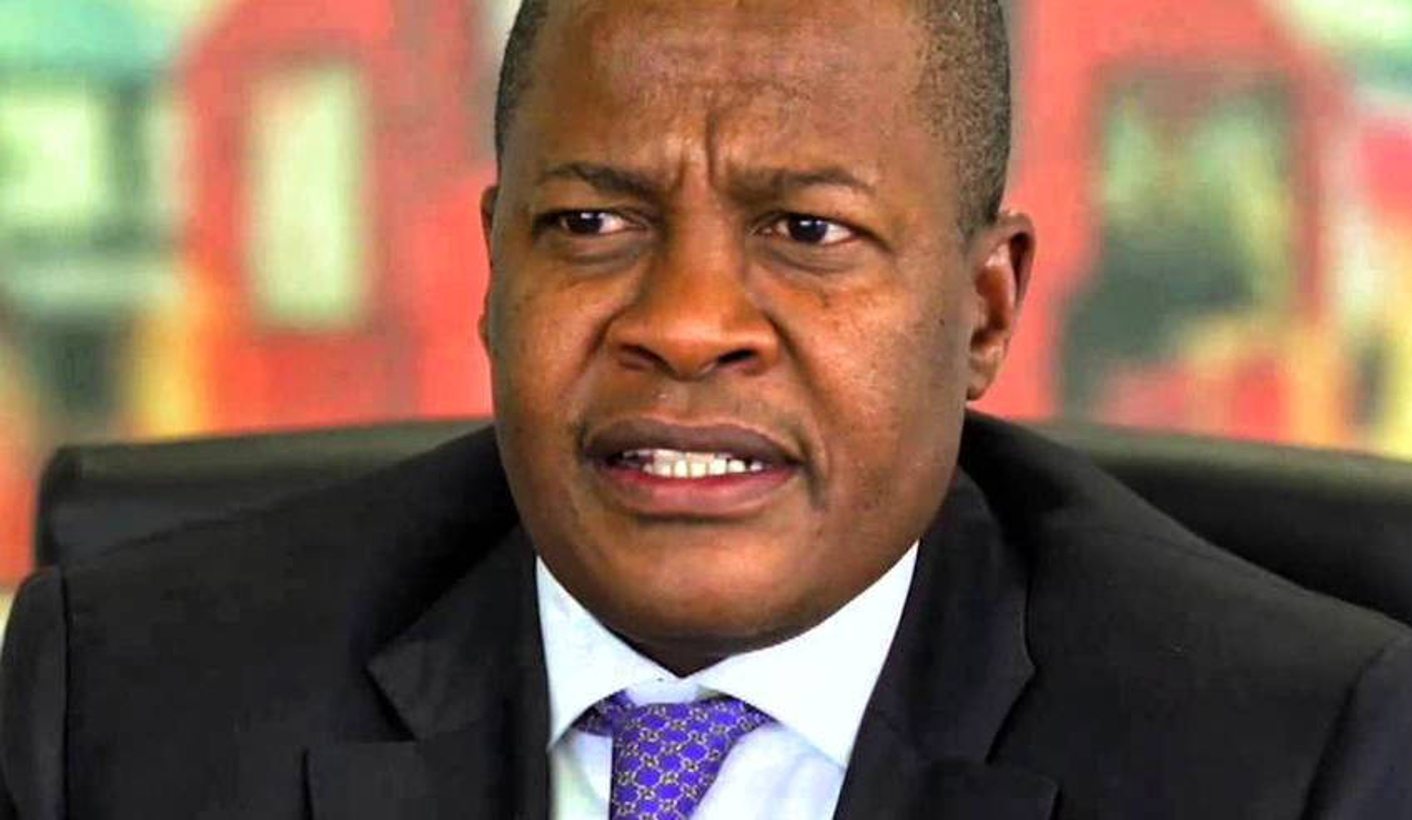 Former Eskom Chief Executive Brian Molefe “retired” with a pension of around R95,000 a month, and approximately R7.9-million cash, on the back of a letter by then board chairperson Ben Ngubane. That’s because Eskom bought its chief executive another 13 years of theoretical service – Molefe had worked at Eskom for 16 months – and paid the penalties normally applicable. What emerged before Parliament’s Eskom inquiry on Friday highlighted the manipulation of rules of the power utility’s pension fund whose managers simply crunched the numbers following Ngubane’s instruction. But questions emerged as to whether Molefe ever was entitled to an Eskom pension in the first place. By MARIANNE MERTEN.

Brian Molefe, former Eskom chief executive and ex-ANC MP, has been at the centre of controversy for several reasons – from reported links to the Gupta family to his short-lived return to the power utility amid a furore over a multimillion pension benefit that was cut short after the intervention of a Cabinet inter-ministerial committee.

On 11 November 2016 Molefe said in a public statement that “in the interests of good corporate governance, (he) decided to leave my employ at Eskom from 1 January 2017”. The announcement came shortly after the Public Protector’s State of Capture report linking him to the Gupta family through more than 40 telephone calls to various family members, or their business associates, at the time the power utility was negotiating a coal supply deal with Tegeta, a Gupta-linked company.

The date 1 January is important as it turned out in Parliament on February that it was when he turned 50.

In late February Molefe was sworn in as ANC MP, but left after about three months to return to Eskom. On 12 May 2017 Public Enterprises Minister Lynne Brown, who just months ago publicly accepted Molefe’s “resignation”, announced Eskom’s board had “rescinded” what was now called his “early retirement” because his return to the power utility, despite its controversy, was “a significantly better value proposition for the South African fiscus” than paying him R30-million in pension money.

But amid the public outcry over Molefe’s return to Eskom, a Cabinet inter-ministerial committee was established which on 1 June 2017 announced the rescinding of what was rescinded. With regards to the financial payout, the Eskom board used the wrong provision, which was meant for retrenchment, the committee said at a media briefing.

“Mistakes were made in good faith,” said inter-ministerial committee convenor Justice Minister Michael Masutha. “It will be in best interests in government, Eskom and the country that the Minister of Public Enterprises directs the board to rescind the re-appointment of Mr Molefe.”

In no way was this a reflection on Molefe’s capabilities, according to Masutha and Finance Minister Malusi Gigaba, who added: “If mistakes are committed by the board of a state-owned entity, the stakeholder (government) must intervene and self-correct… We are taking this decision in the best interest of our country and public”.

And so Molefe, once rumoured to have been brought to Parliament to be in line as the next finance minister, was out of a job, and out of money. He went to court. But the scrutiny of Eskom and its actions amid State Capture continued.

On Friday Parliament’s public enterprises committee considered the pension saga. And what emerged highlighted how instructions by higher-ups are followed unquestioningly, how rules can be manipulated and how those following the rules ultimately hid they were only following the rules.

When, after a few months in an acting capacity, Molefe was appointed to head the power utility in late 2015, Eskom informed its pension fund he was a “PPX”, the code for a permanent employee.

Like 1 January, Molefe’s birthday, this code is also vital. Only permanent employees, not anyone on fixed-term contracts, is entitled to join the R143-billion Eskom pension and provident fund. But actually Molefe had joined Eskom on a five-year fixed-term contract.

When Molefe in November 2016 announced he was departing from Eskom, he was 49. Hence the departure effective only from 1 January 2017, when he turned 50. First pension fund rule ticked.

This is where Eskom board chairperson Ben Ngubane’s letter comes into play. It was central to processing Molefe’s pension benefits, according to the power utility pension fund Chief Executive Sbusiso Luthuli. The letter on Molefe’s approved early retirement for the purchase of 13 additional years of additional “theoretical” service were “very clear”, he told MPs: “The employer (Eskom) was very clear, the penalties must be waived. They will pick up the cost,” said Luthuli, adding later: “The letter came from Dr Ngubane. It was signed by Dr Ngubane.”

And so the pension fund proceeded to crunch the numbers, arriving at R30.1-million that Eskom would have to pay it to cover Molefe’s pension benefits as if he had worked at the power utility until the age of 63.

Including the benefits from his R4.2-million pension accrued at his previous four years at the helm of Transnet, which was transferred to the Eskom pension fund, Molefe’s pension benefits amounted to a monthly R111,000 and R9.7-million in a cash payout.

“The fund correctly retired Mr Molefe,” said Luthuli – repeatedly emphasising the fund had followed all its rules. However, it later emerged that when the executives finally briefed the Eskom pension and provident fund board amid the public controversy, legal opinions obtained held Molefe’s pension should have been presented to the board, and that because he was not a permanent but a fixed-term contract employee, there were questions as to whether he qualified for benefits in the first place.

Amid the controversy over these pension benefits, the fund stopped paying the monthly pension, but the cash had already been paid out. The pension fund is now awaiting the conclusion of a current court case on this matter.

As the Eskom pension fund admitted to that MPs it only became aware of possible discrepancies following media reports, Luthuli said the pension fund had relied on Eskom for its information: “Eskom indicated he’s a permanent employee, the fund did not question this.”

Luthuli’s testimony under oath on Friday may, however, land Ngubane – he has since resigned from Eskom board – in hot water. At the public enterprises committee meeting on 23 May 2017, Ngubane had told MPs there had been nothing untoward with Molefe’s pension, as Eskom had bought him 10 years’ service. “We had a signed agreement. We bought him 10 years,” Ngubane said then, arguing this was done in recognition of Molefe having been moved from the Public Investment Corporation (PIC), to Transnet and then Eskom.

But that is something for the parliamentary Eskom inquiry to consider, if it chooses so. More imminently is the change of chairperson of the public enterprises committee. As the inquiry this week inched its way forward, in a case of most curious timing, the ANC announced it was swapping its chairperson: Zukiswa Rantho will be replaced by Lungi Mnganga-Gcabashe, previously the human settlements committee chairperson. The changes were brought about as former public enterprises chairperson Dipuo Letsatsi-Duba was made Public Service and Administration Deputy Minister in the March reshuffle by President Jacob Zuma.

While the jury is still out on Mnganga-Gcabashe’s stance to this State Capture probe, it comes in the wake of Thursday’s ANC parliamentary caucus which defeated attempts to squash this parliamentary inquiry. Daily Maverick has reliably learnt the discussions on Thursday were heated, but in the end went in favour of the Eskom parliamentary State Capture inquiry, and others the national legislature may hold, in what is regarded as a win for those wanting to deal with the damaging claims, and clean up.

Eskom’s pension and provident fund chairperson Mantuka Maisela on Friday described the Molefe pension saga as “unique”. The board was now revisiting its rules.

Whether that’s good enough in these days of State Capture, not only at Eskom, remains to be seen. DM