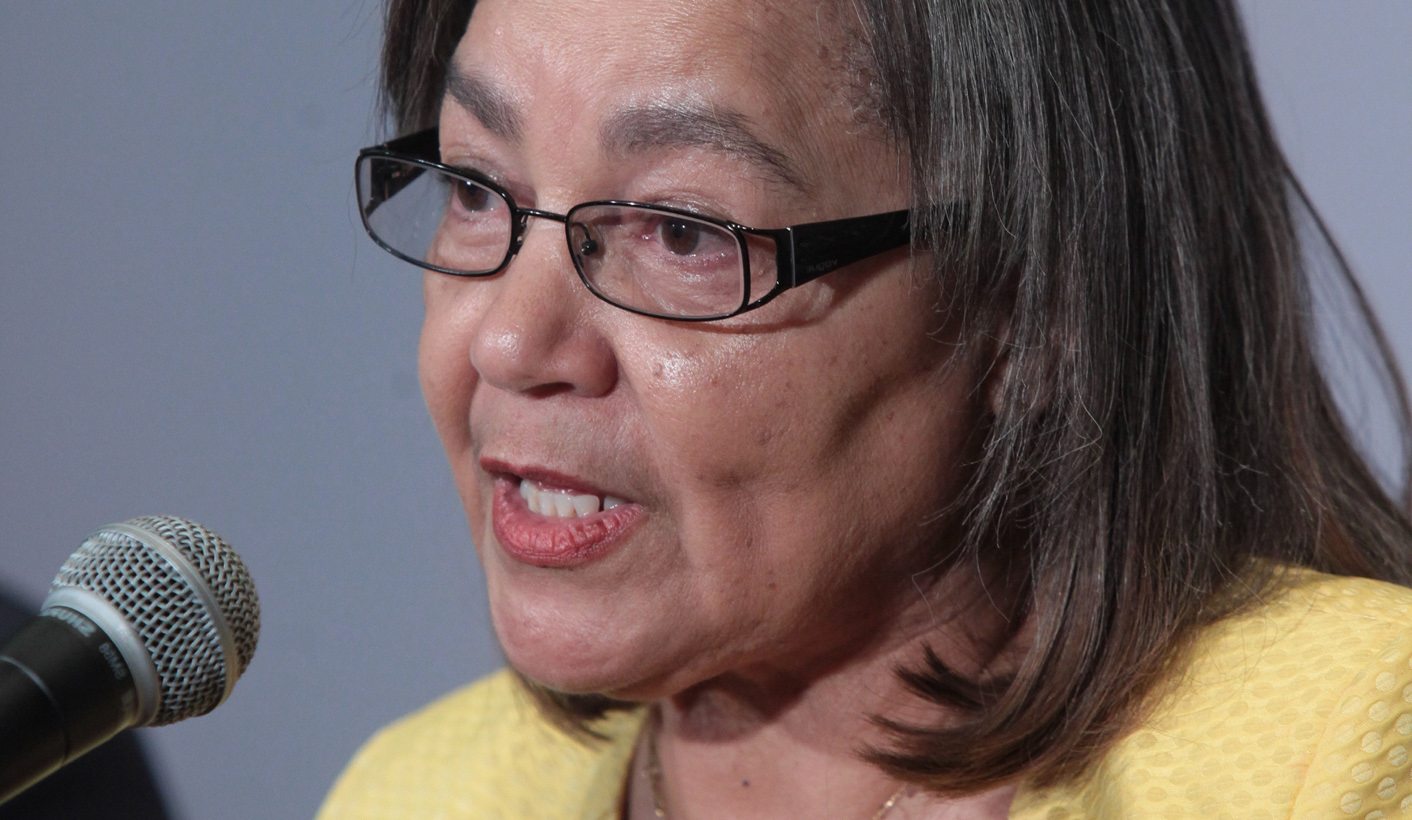 It’s not a good look for both the Cape Town mayor and one of the city’s most prominent councillors to be placed on “special leave”. But this was the unusual move announced by the Democratic Alliance on Tuesday following an acrimonious dispute between Mayor Patricia de Lille and councillor JP Smith. Allegations and counterallegations have been hurled regarding upgrades to De Lille’s private home and the disbanding of a special police investigative unit. The wider picture, however, is with regards to the DA’s provincial leadership election taking place this weekend, and the fractures within the Western Cape’s ruling party. By REBECCA DAVIS.

There’s something about the idea of “publicly funded security upgrades to a politician’s private residence” that tends to raise hackles in South Africa. Call it muscle memory.

Reports that something of this nature may have occurred at Cape Town Mayor Patricia de Lille’s home brought Daily Maverick to the residence in question on Tuesday. De Lille’s suburban home is no Nkandla; there is little to distinguish it from adjacent properties. The bungalow did show some evidence of recent construction work: a small pile of sand and bricks was stacked alongside the driveway. Security features seemed to constitute a number of outward-facing cameras along the perimeter wall, an electric fence, at least one dog – and De Lille’s son Alistair.

“What the fuck are you doing here?” Alistair de Lille shouted at the sight of Daily Maverick journalists. “This is a private home! We’ve got you on camera! We’ll report you to the police!”

De Lille’s private home has been in the spotlight for the last few days after a document alleging irregularity in security upgrades to the residence was leaked to the media.

The document, authored by mayoral councilor JP Smith, reported that members of a special Metro police unit had alleged that “they had witnessed irregularities in relation to the mayor, e.g. that building work outside of the security policy of the city had been undertaken at her home at the expense of council”.

Both De Lille and the City of Cape Town have strongly denied the suggestion. “Regarding renovations at my house, these were paid for by myself and I am prepared to make the proof of these payments made by myself known as part of the proper legal processes,” De Lille said in a statement on Monday. This followed a statement by City of Cape Town Speaker Dirk Smit which says that security upgrades to the mayor’s home were undertaken after a police assessment, with “proper supply chain management processes” followed.

De Lille has indicated that she is considering taking legal action against Smith as a result of his “malicious and defamatory remarks”.

But speaking to Daily Maverick on Tuesday, JP Smith was at pains to stress that he did not personally accuse De Lille of having misused public funds on her private home.

Smith said that in the course of trying to establish why the mayor had ordered the disbanding of the city’s special investigations unit (SIU), he had been told that there was chatter to this effect among the unit.

“I relayed it purely as a speculation,” Smith said. “If I had proof of it I would not be speculating – I would lay formal charges.” He said that he was retrospectively “very sorry” that he had included the rumours in his report “because it is now a distraction”.

Smith says his major concern is about the effective shutting down of the SIU in August following an instruction from De Lille.

Established four years ago, Cape Town’s SIU was approved by the city council and police commissioner in an attempt to bolster the city’s policing capacity.

“It was not a hare-brained idea,” says Smith. “It was about building capacity where we saw policing efforts failing – where we saw inadequate investigative capacity and intelligence-driven policing, and an average of 3% convictions for gang-related crimes.”

The SIU’s focus was on gang violence, illegal firearm possession, drug crimes, reckless driving, illegal protest action and the murders of police on duty. Smith says it racked up some significant successes: a 100% conviction rate for police murders, the busting of several firearm licence fraud rings, good rates of firearm collections and the pursuit of cases which otherwise collapse due to procedural error.

He says it is testament to the SIU’s effectiveness that the Hawks have on several occasions asked the body for assistance with difficult cases.

As of August, however, the SIU no longer has the mandate to pursue such matters. It will now be limited to pursuing internal investigations, under the new name “Safety and Security Internal Investigations Unit”.

It is still not entirely clear why the SIU’s mandate was reduced in this matter. De Lille’s spokesperson did not respond to a request for comment from Daily Maverick on Tuesday. In her Monday statement, however, the mayor suggested that the unit was overstepping its remit under direction from Smith.

“We all know that crime fighting is the responsibility of the SAPS under national government. JP Smith wants to play cowboys and crooks by releasing all kinds of statements that the Metro police is responsible for fighting crime,” De Lille said. “The task of the Metro police department in terms of legislation is enforcement of by-laws and regulations, traffic laws and crime prevention.”

Smith strongly denied to Daily Maverick that the unit had in some way gone rogue, however.

“That unit at no point overstepped its mandate,” he said; instead, the unit fulfilled the mandate set out for it in the city’s annual police plan. Smith also said that he had absolutely no “operational control” over the unit.

This is in contrast to allegations made by the ANC Western Cape that Smith was using the unit as his personal fiefdom to gather information for political gain. ANC Western Cape secretary-general Faiez Jacobs used strikingly similar language to De Lille in characterising the situation to News24: “Cowboy JP Smith’s wings have been cut because he was running his own unconstitutional information gathering service.”

While the situation involving the SIU is still murky, several aspects of the fracas are revealing. One is a breakdown of relations between De Lille and Smith. (Asked by Daily Maverick if he had a strained relationship with the mayor, Smith replied: “That is not relevant.”) This probably reflects wider tensions between De Lille and the old guard of the DA-run city, with fractures rumoured for some time.

De Lille has previously been accused of favouring allies from her former political party the Independent Democrats for top spots within the city caucus. Her resignation from the DA’s provincial leadership in January this year was also said to be linked to tension with Western Cape Premier Helen Zille over De Lille’s appointment of controversial former ANC councillor (and “poo-chucker”) Loyiso Nkohla to a plum job within city administration.

The public spat between De Lille and Smith takes place just days before the DA’s provincial congress this weekend. Smith is running for a position on the provincial executive there. It is not clear whether De Lille and Smith will now be able to play an active role in the congress following DA leader Mmusi Maimane’s decision to place both politicians on special leave on Tuesday.

At the provincial congress a successor to De Lille as provincial leader will be elected. De Lille ally Anda Ntsodo is one of three contenders, standing against MEC for Human Settlements Bonginkosi Madikizela and former provincial police commissioner Lennit Max. The leadership race has already seen public mud-slinging between Max and Madikizela. The winner will face the unenviable task of dealing with the fractures within the Western Cape’s governing party amid the political tensions accompanying the province’s worst drought in over a century. DM