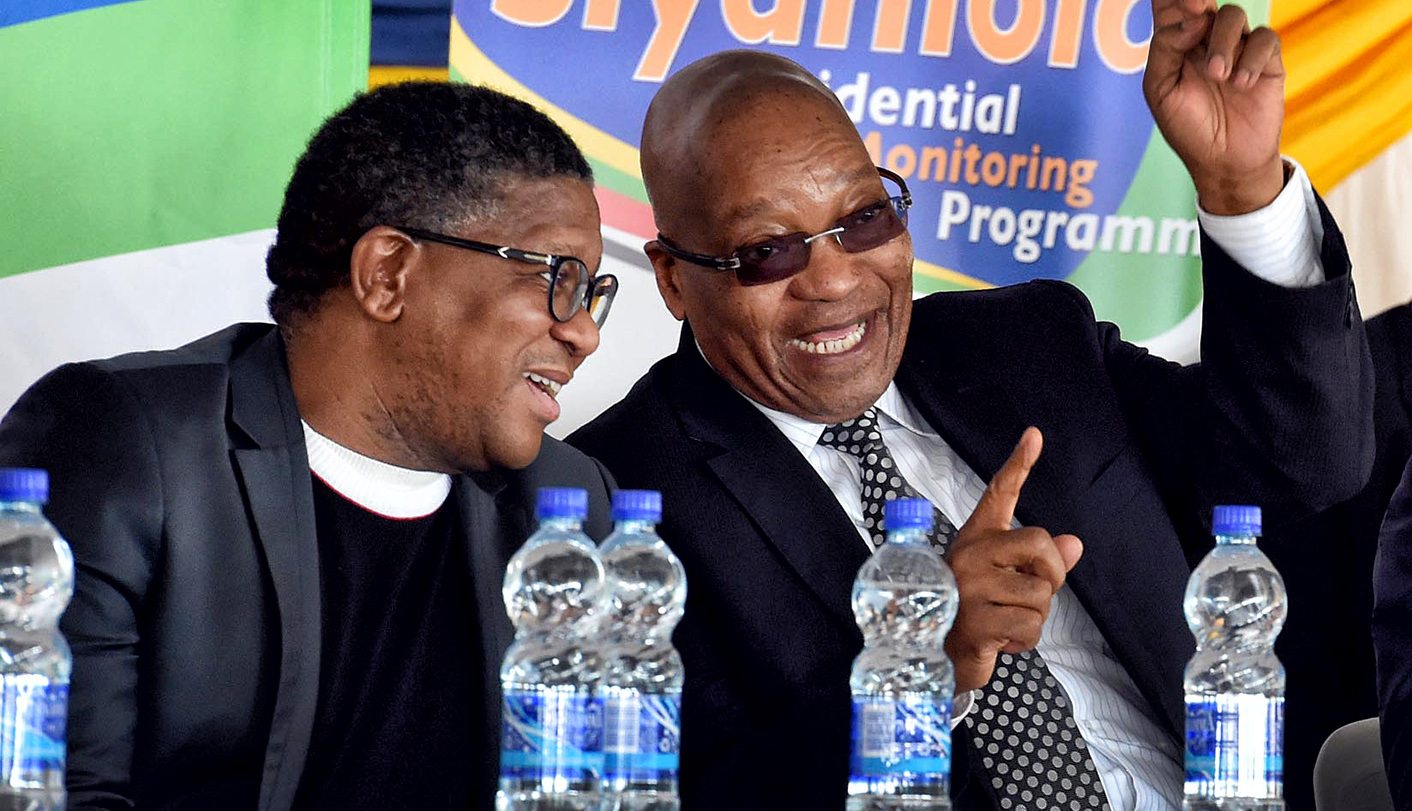 Because police vehicles don’t fit between shacks and informal settlements are dark at night, police have ditched their constitutional mandate of protecting South Africans. It seems getting out on foot with a flashlight for regular patrols to gain the confidence and trust of communities, and keeping an ear to the ground to prevent crime, is just simply a step too far. And so the SAPS falls back on kragdadigheid – putting on a show of force like a special event to saturate an area in a time of crisis before retreating again into the relative safety, and inaction, of their offices. By MARIANNE MERTEN.

In Marikana informal settlement on the Cape Flats, 18 people were murdered and four wounded in 17 days in September. Police from the local station, Philippi East, appeared to sit on their hands until the killing of 11 people last Friday hit the headlines. Now the area is flooded with additional police deployed there until April 2018, as Police Minister Fikile Mbalula on Tuesday made a turn there talking “flashlights” and announcing that there would be a new station commissioner.

But this display of action is just that: a show. It’s a Band-Aid that cannot hide the deep-seated dereliction of duty by police in their constitutional responsibility to “prevent, combat and investigate crime, maintain public order, to protect and secure the inhabitants of the Republic and to uphold and enforce the law”.

While today the focus falls on Cape Town’s Marikana, by admission of acting national police commissioner Lieutenant-General Lesetja Mothiba, the situation there is the same as elsewhere in the country – be it Alexandra township in Johannesburg or the deadly Glebelands hostel in Umlazi, KwaZulu-Natal, where over 90 people have been killed in less than two years, effectively one person almost every week.

“If a person goes to any township, the situation is the same,” Mothiba told MPs on Tuesday. “I commanded a police station in Alexandra and it’s almost the same as Marikana.”

And in such circumstances, said Western Cape police commissioner Lieutenant-General Khombinkosi Jula, “normal” policing can’t happen. “It’s an area that cannot be policed through normal policing. It can only be policed through operations that don’t put (SAPS) members’ lives at risk”.

Yet on the SAPS’s own account its predilection for the kragdadigheid display of force in special operations also doesn’t work – okay, it may look impressive on paper presented to politicians – as it merely temporarily displaces criminal activity elsewhere.

Between May and September 2017, the SAPS held 11 special operations in Marikana, leading to 294 arrests. Amid long-standing community complaints about lack of action by police to their complaints, Jula chose to highlight as a “breakthrough” the arrests made for business robberies and the confiscation of 18 illegal firearms. Little was said about the SAPS’s failure to close down the 153 identified illegal liquor outlets in the area – and seven drug dens – beyond a shrug-of-the-shoulders response by Mothiba: “It’s a way of life. It’s a way of survival.”

Questions must be asked what happens elsewhere where resources are scarcer. But still SAPS blame-shifting comes fast and furious. The urban design is not conducive to policing in the absence of lighting and residents setting up their own hotchpotch ablution facilities that hinder access. The area is so dark when police arrive they have to organise guards for their vehicles, said Jula: “If we could at least get the lightning… it would make our jobs easier.”

This police no-can-do attitude – regardless of Mbalula’s political promises in Marikana to take back the streets, corner by corner – condemns millions of South Africans in informal settlements and the apartheid hostels, who unlike the chattering middle classes cannot afford private security, to fend for themselves.

And that’s exactly what residents of Marikana had done, by all accounts. Residents got together to patrol the streets the SAPS were too scared or disinterested to safeguard. There have been long-standing grievances about the police’s failure to respond to complaints – the SAPS top brass acknowledged to MPs this week that only about 60% of station commissioners were up to the task – amid a complex set of dynamics of vigilantism, gangsterism and criminality, central to which are “amawele” (isiXhosa for twins), one of whom was in jail. This was eventually sort of confirmed by police on Tuesday – “We are becoming aware who the (criminal) leaders are,” said Mothiba – after it was first raised in a Marikana community leader’s account of what was happening on Monday’s SAfm the forum @ Eight debate.

But these dynamics seemed beyond the SAPS on Tuesday amid an admission by crime intelligence that it was caught with its pants down due to lack of impimpis. When MPs asked what sparked the killings in Cape Town’s Marikana, the police kept on coming back to vigilantism. “It is clearly a vigilante (incident) where the community set alight three people. We arrested members of the community,” said Jula.

Well, that happened on 12 September. On 25 September one person was forcibly taken form a house and found stabbed to death, while a day later two people died in another incident that also left a third person critically injured in hospital. On 27 September two people were found dead, with another found with multiple stab wounds. On 29 September 11 people were killed, as police put it, in five crime scenes: four people at a shebeen, four people drinking in a shack, “one man wearing a security guard uniform was attacked (and killed) walking between shacks” as was another man, while “men attacked a man, who was picked up in a taxi, but later died in the Mitchell’s Plain Hospital. Three other people were shot in “the thighs, mouth and arms”, according to Jula.

This dry bureaucratic police jargon obscures the horror of a community under the whip of criminals and gangsters in Cape Town’s Marikana. Similar accounts emerged at the Moerane commission of inquiry that heard of “room lords” running the notorious Glebelands hostel. And it echoes across South Africa.

None of this will change unless the SAPS stops shifting blame and using its blue uniform as a tool of power to diminish the contributions community leaders, community policing forums (CPFs) and residents might be able to make – if they were heard.

The SAPS’s unwillingness to do their job in public service of communities, regardless of challenges, has left a vacuum that criminals are only too ready to fill. Unless there is fundamental change in policing, the constitutional guarantees of safety and security for all who live in South Africa are not worth the paper they are written on. DM

Photo: President Zuma flanked by Minister of Police Fikile Mbalula during the Presidential Siyahlola Monitoring Visit, the focus is on building a safer communities and the improvement of service delivery in the area. June 24, 2017 (GCIS: Photo)