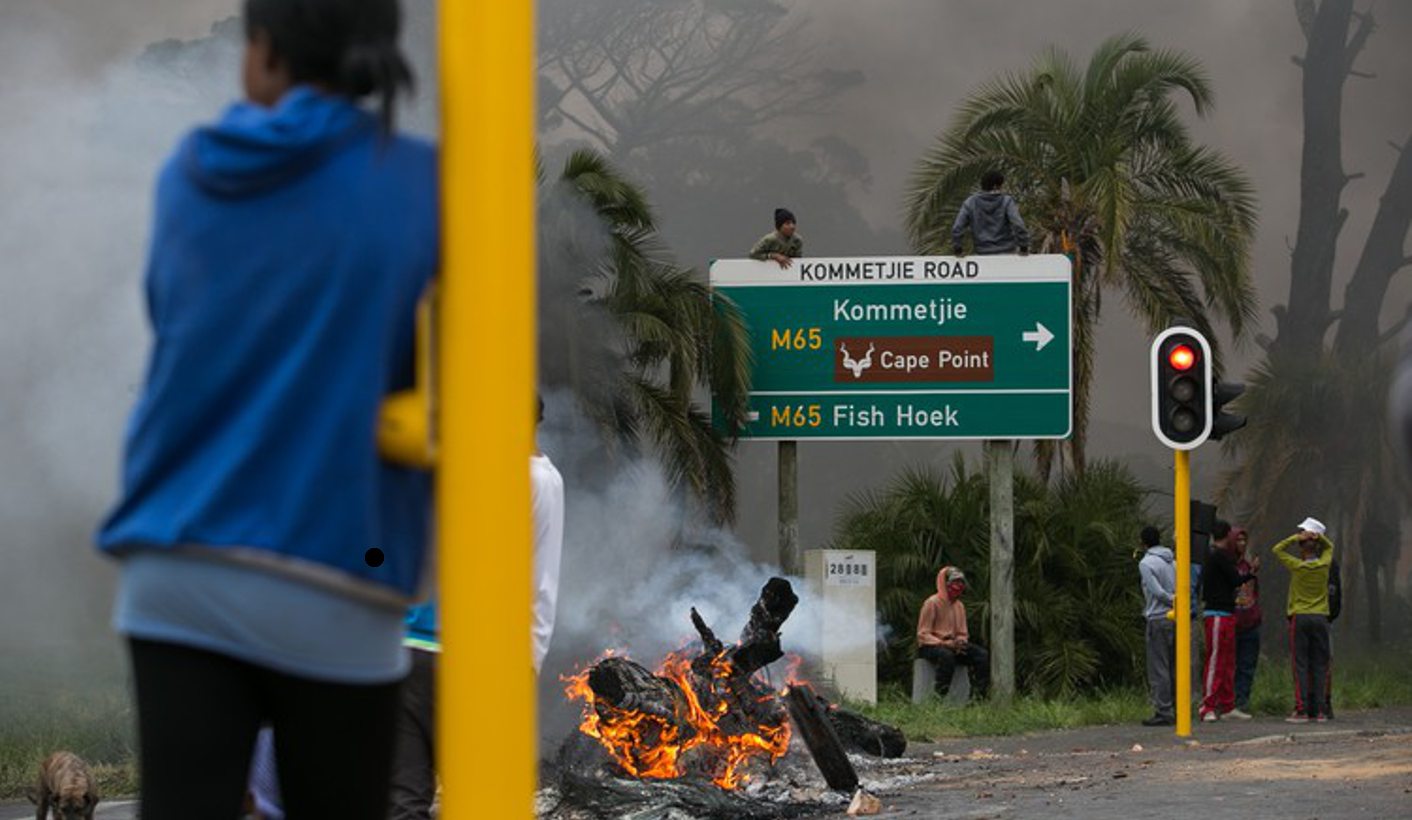 “The people are suffering because crime has taken over. We’re crying for help,” say residents. By Nomfundo Xolo and Ashraf Hendricks for GROUNDUP.

Police and about 150 residents of Ocean View in Cape Town’s south peninsula clashed on Thursday. This was the second consecutive day of protests. Youths blocked Kommetjie Road with stones, burning wood and tyres, while police used rubber bullets and tear gas to disperse them. The protests continued throughout the day.

The purpose of the protest, which started peacefully on Thursday morning,was to demand that police take action to reduce the high level of crime in the township. Throughout the day discussions took place between public order police, the local neighbourhood watch, pastors and community representatives. But there appeared to be no resolution as barricades continued to burn.

Protesters complained about the lack of arrests following fatal shootings and other crimes in the community related to gang activity. A fatal shooting on Tuesday night that apparently left at least one person dead appears to have set off the demonstrations. (GroundUp had not been able to confirm this at the time of publication.)

“I was robbed last year in July by young boys who pointed a gun to my face and took my things. My two boys have also been robbed at gunpoint. When I reported it to the police they asked me what I was doing on the streets. We want the murderers and gunmen out of our community,” said Lee Adams.

Angelique Williams shouted: “We are here to take our streets back. The police must recognise us and take this matter seriously. The gangsters shoot even young kids, with deaths every week. When we report to the police they don’t come. Currently the gate to our local police station is locked. They’re supposed to protect us.”

Paul Franke, a member of the neighbourhood watch, said that after numerous discussions with local committees, councillors and the police about crime in Ocean View, the community had seen no results. “This is clearly the only way they will hear us. We’re not fighting with them but we’re fighting for our community to be safe once again. Twelve of my relatives have been killed through gang violence,” he said.

Addressing the protesters, Andre Stewart said that the police also needed to protect those who report cases: “If you talk, you’re dead tomorrow. The people are suffering because crime has taken over. We’re crying for help.”

After discussions between various parties, a few police trucks, vans and metro police entered the township. But after a short while, a police truck was seen exiting, which angered the protesters. Nevertheless, the crowd was soon calmed by one of the community leaders.

However, a few boys who had been watching the protest from across the road began throwing stones at the truck that was moving away. This saw police retaliating, shooting tear gas into the crowd. Shortly after, a water cannon dispersed the crowd and extinguished the burning tyres.

Chaos then erupted as stones were thrown by protesters, and police released tear gas.

About 150 people joined the protest

A dog sits nonchalantly in the middle of the drama

Police and residents hold a meeting. During the mediation, police told residents that they would enter Ocean View and remove  firearms

Residents cheer as more tyres are brought to the protest

A water cannon was used to put out the flames. A small group of residents  threw rocks and shot a flare at police causing  matters to escalate

Protesters, a large number of whom were children, blocked the road. Police fired stun grenades to disperse them.

The  water cannon put out the flames and dispersed  protesters

Photo: Onlookers watch as residents from Ocean View block Kommetjie Road during a protest on Thursday. All photos: Ashraf Hendricks