What the Papers Say: Springboks took one hell of a beating 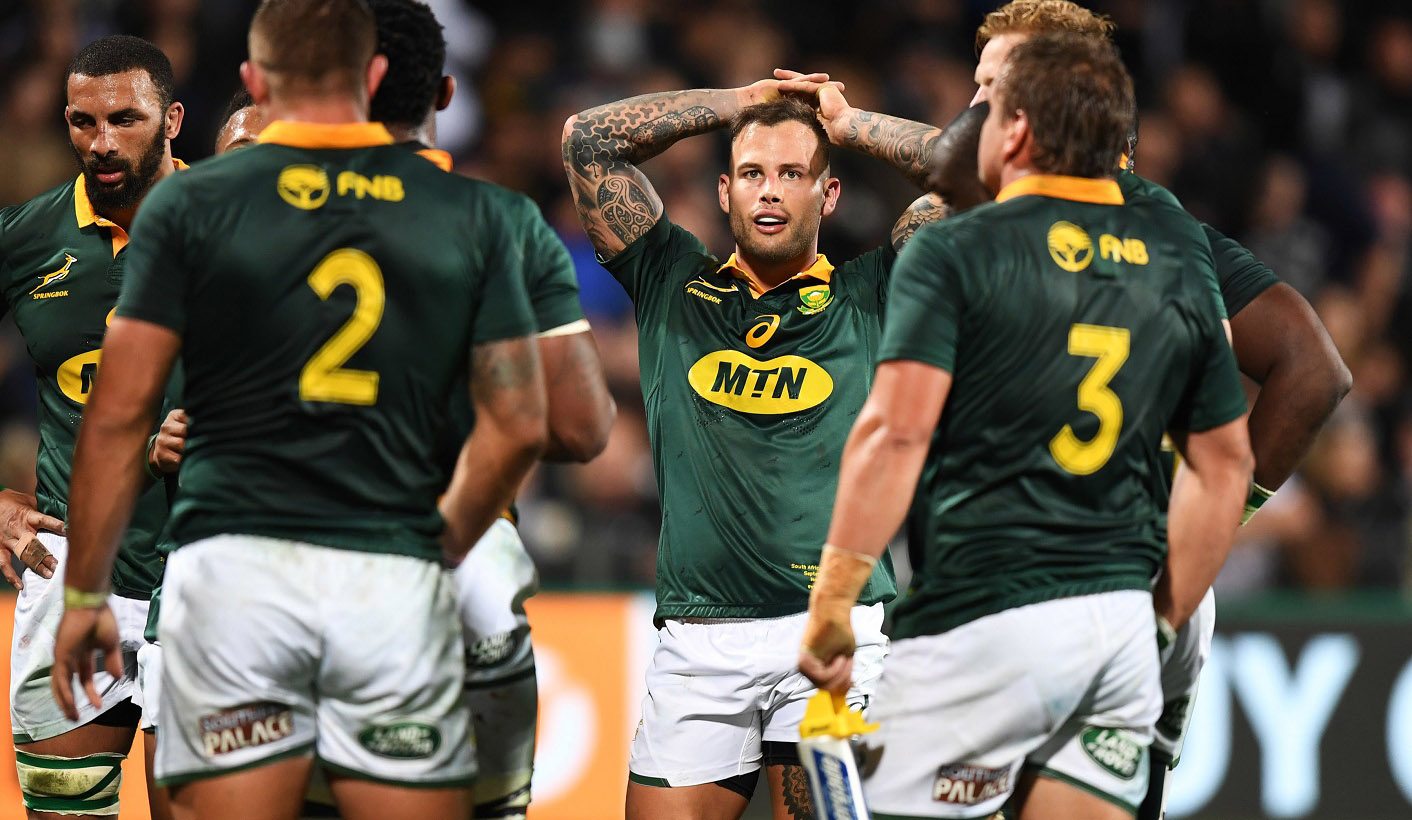 Headline writers and pundits weren’t kind to South Africa following their embarrassing, record 57-0 defeat against the All Blacks over the weekend. ANTOINETTE MULLER gathers some of the harshest words from around the web.

The Springboks must be captured. Their humiliating 57-0 defeat to the All Blacks over the weekend must have been the latest in diversion tactics in the wake of state capture. Despite showing signs of promise in the first 10 minutes against New Zealand, it all went to hell in a handbasket after the home side opened the scoring.

Over a of points from the All Blacks and not a single one from South Africa. On stuff.co.za Marc Hinton pondered whether “international rugby’s greatest rivalry” was under threat.

“You can now make a case that the All Blacks-Boks is no longer a rivalry as such. More like an ownership,” Hinton wrote.

New Zealand won 14 of their last 16 Tests against South Africa – the last win coming in 2014. It makes for pretty grim reading and to rub it in, Hinton adds: “The All Blacks have won their last three Tests against the South Africans 57-0, 57-15 and 41-13. I say again, does that sound like a rivalry to you?”

Fair point, Hinton. Well made. No, it doesn’t.

Of course, the result highlights just how big the gap is between New Zealand and the rest of the world. It also begs the question whether much has actually changed for the Boks.

Cynics will say it proves that the wins over France and Argentina came against weakened XVs. Those who are still finding some inkling of positivity will say that the Boks’ body language has vastly improved compared to this time last year. Except for this outing, of course.

Right from the onset, there was this a looming feeling that should New Zealand score first, things would go badly wrong. The Boks had the opportunity to draw first blood, but Elton Jantjies missed a penalty and it didn’t take long for a collective shoulder drop to follow.

And that failure to capitalise early on was something coach Allister Coetzee acknowledged.

“We actually did well in terms of the territorial and possession stakes and it’s just that the pass didn’t go to hand at crucial stages. If we had scored a try or a few points in the first half, it may have been a different thing, but they were just too good for us,” he said.

But possession doesn’t actually matter if you anything with it and the thread of just how decisively the All Blacks won continued with much of the writing. In the UK’s Telegraph, Charlie Morgan wrote: “The 96-year history of this fixture has produced hard-fought, heavyweight contests that have been close and compelling. This was not one of them.”

The Pundit Arena had a grand old time with their headlines, quipping: All Blacks unleash the mother and father of all hammerings.

Also on stuff.co.nz, Mark Reason lambasted the error-strewn performance that saw the Boks punished time and time again. He wrote:

“South Africa had no idea how to cope with New Zealand’s line speed in defence. When they coughed up possession, the Boks then lacked the nous and the speed to scramble back. Every time South Africa made a mistake, and they made plenty, they were burned. The one thing that every team in the world finds hard to defend against is pace and this is one of the fastest All Blacks sides in history.”

Meanwhile, on home soil, former Springboks coach Nick Mallett said on SuperSport that criticising the side would be akin to “clubbing a baby seal”. He took issue with the leadership and pretty much everything else, adding: “The scrums were a shambles in the second half, the lineouts didn’t go well in the first half. The replacements didn’t make an impact. The defence was nowhere. The first-up defence got worse and worse as the game progressed.

“There isn’t enough leadership in this team at the moment and certainly not enough skills. Not one Springbok would make the All Blacks side.”

And former captain Jean de Villiers wasn’t too pleased either.

“We all thought last year losing to New Zealand by 42 points was a low point and we didn’t think it could get worse. It did today. It is very difficult to find something positive to say about this game,” De Villiers told SuperSport.

But, if the Boks are honest with themselves, they haven’t really been able to consider themselves a rival to anyone in the last three years or so.

The problems that have led to this low point are systemic. It has not happened overnight. They certainly aren’t going to go away after being plunged into a 57-0 nightmare. DM

Photo: Francois Hougaard shows his disappointment during the All Blacks v Springboks rugby test at the QBE Stadium in Auckland, New Zealand at the weekend. Photo: Andrew Cornaga/www.Photosport.nz