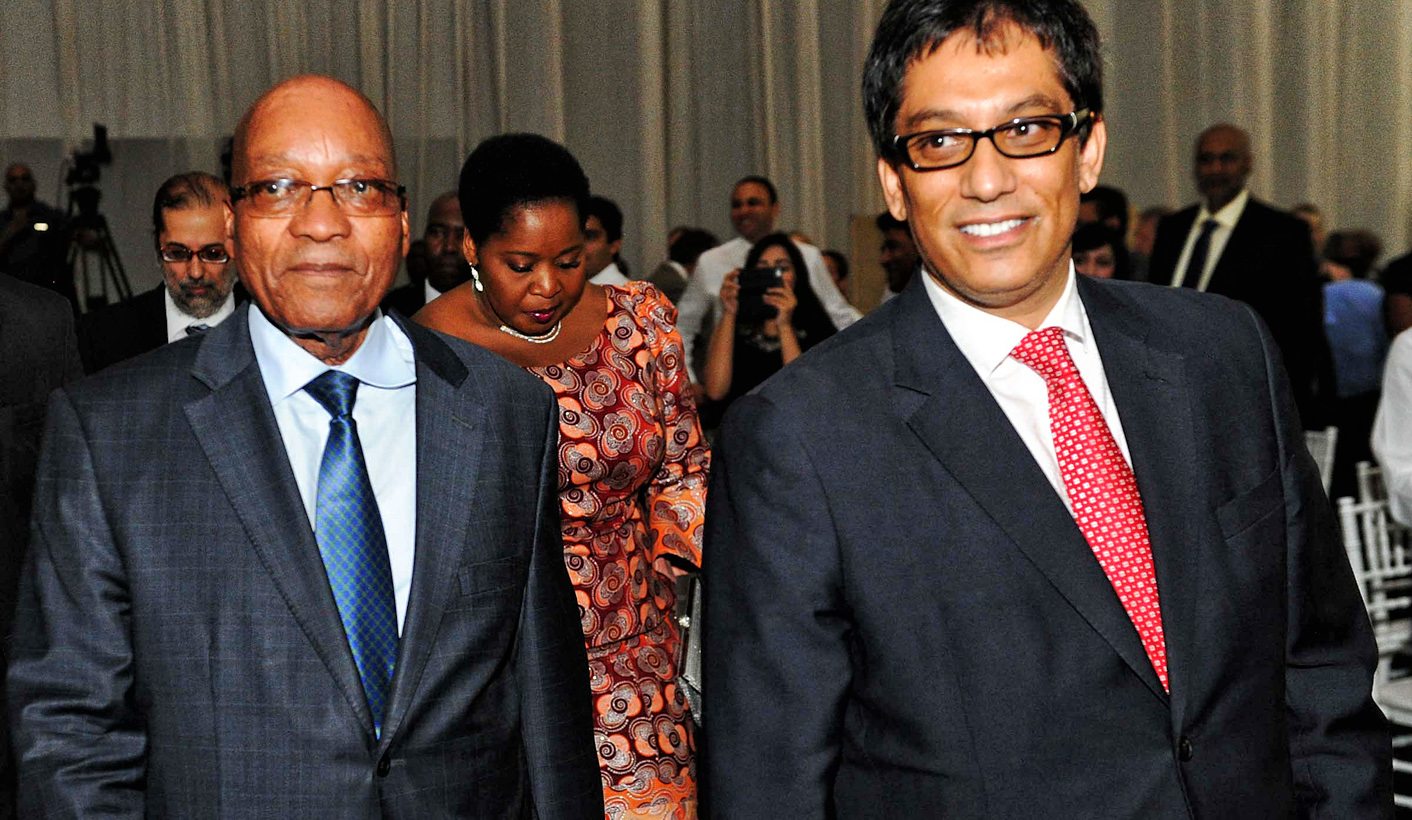 From the time the Sekunjalo Group purchased Independent Media SA (INMSA) from its Irish owners four years ago, INMSA publications have undergone a radical repositioning – particularly the Cape Times and its coverage of the University of Cape Town (UCT), Rhodes Must Fall (RMF) and Fees Must Fall (FMF). This transformation occurred almost simultaneously with INMSA executive chairman Iqbal Survé’s resignation from his university posts. UCT Vice-Chancellor Dr Max Price claims Survé jumped before he was pushed. Were personal reasons behind an apparent Survé vendetta against UCT and its management? By RICKY STOCH.

“The one minute he (Survé) espoused the virtues of the university, the next minute he totally hated the institution,” explains Rhoda Kadalie, well known South African academic and UCT council member. To date, the official line has been that Survé’s resignation as UCT Graduate School of Business (GSB) advisory board chairman and as a member of the UCT Foundation Governing Board was because of the untransformed nature of the institution. Surve claimed in the Mail & Guardian (M&G) in January 2015, that he was unable to “respect an institution that continues to pay lip service to… transformation”.

However, Kadalie and others have long speculated that a lack of transformation was not the real reason. Kadalie, for example, argued in a “letter to the editor” published in the M&G: “no university of UCT’s calibre can stand idly by when someone who chairs the advisory body of Graduate School of Business (GSB) is embroiled in a widespread media scandal”. Kadalie was referring to Survé’s infamous firing of Alide Dasnois, former Cape Times editor in December 2013.

In the same letter to the M&G, Kadalie also referred to the scandal surrounding an R800-million tender, awarded to another of Survé’s companies, Sekunjalo Marine Service Consortium (SMSC), by the Department of Agriculture, Forestry and Fisheries (DAFF). Surve opened a case suing Kadalie for R1-million claiming her assumptions about him being “pushed” were defamatory.

To date, Kadalie’s letter has remained speculative, as no “hard evidence” has been published confirming, or denying, these assumptions. “Rhoda guessed at it and she wrote an article in the M&G for which Iqbal then tried to sue her… that letter is very accurate,” Price now says. When asked about the lack of hard evidence regarding Survé’s resignation Price said: “I have evidence but it is in confidential emails.”

Price explains that UCT alumni felt it was inappropriate to have someone with a history of “allegedly unethical business practices” associated with, or representing, the GSB. Additionally, GSB staff were concerned that Survé claimed to be instrumental in the selection of the new director of the GSB. This was not only false, Price noted, but the claim compromised the academic freedom, independence and autonomy of the school.

Ultimately, the widespread scandal involving improper tendering by SMSC as well as the controversy surrounding the dismissal of Dasnois from the Cape Times rendered Survé’s relationship with the university problematic. As a result, there was a general feeling from both alumni and the University Executive that Survé should be asked to resign from his various positions.

According to Price, Survé was “very angry”. Survé argued that the university did not appreciate the struggles of black students and alumni but that in spite of this he had remained loyal to the institution.

After much discussion, Survé agreed to step down from the positions he held at UCT. Price attempted to soften the blow explaining that an instant resignation was not required. He also suggested that at the next meeting of the GSB advisory board and the Foundation Governing Board, Survé should announce his resignation because of a need to devote more time to the newly purchased INMSA.

In November 2014 it was assumed that the meeting in which Survé would resign would go ahead as planned. However, three weeks after the meeting took place Price was informed that Survé had not resigned and that he remained in his positions at the university.

Before Price was able to confront Survé, he was required to preside over the graduation proceedings for that year. At the Humanities Faculty graduation on 16 December 2014, Dasnois, who Survé had fired almost exactly one year prior, was invited to give the keynote address to students and staff.

Unbeknown to Price or the graduation committee, Survé’s daughter, Saarah, was graduating at that ceremony. Survé saw the invitation to Dasnois as an intentional act by Price and the university to humiliate him and his family.

Survé resigned soon after citing the university’s lack of transformation as his reason.

Surve did not respond to two email requests for comment regarding the reasons for his resignation and the subsequent Cape Times coverage of events at UCT.

Though the relationship between UCT and the Cape Times had previously been, “excellent,” explains ex-Opinions Editor of the Cape Times Tony Weaver, in early 2015 it became “antagonistic to the point that it has become an anti-UCT campaign”.

According to Price, even positive news stories were presented under a negative headline “based on an extract of a quote from a single critic that had been sought out. In some cases trivial anti-UCT stories were given precedence on the front page while important global or local news was not covered, or was relegated to inside pages of the paper”.

Many noticed that coverage of the university had become notably one-sided. Carlo Peterson, Cape Times reporter known for his coverage of South African tertiary education, agreed to be interviewed twice but did not show up for the first interview, and cancelled the second five minutes after it was scheduled. Ultimately, Peterson agreed to an email interview in which he said, “I’ve tried to interview Dr Price, but he refused to comment”.

Neither Price nor Patricia Lucas, UCT media manager, has any recollection of Peterson ever requesting an interview with Price.

“Quite often, in fact very often,” Lucas says, “the bulk of the information that we supplied to the Cape Times was not referred to, or was treated as if it didn’t mean anything and dismissed by Carlo and not used in their articles.”

According to Peterson: “The Cape Times gave the students a platform to get their voices heard, and to spur discussion related to the campaigns they were involved in.”

Yet, from Peterson’s coverage, with specific reference to his coverage of the RMF and FMF movements, it is evident that the narrative of students was one-sided. The views of those who did not support the removal of the Rhodes statue from the university or the call for free tertiary education were mainly excluded from Cape Times’ coverage.

Ultimately, Price and the university were portrayed in the Cape Times as anti-transformation, anti-student activism and anti-change.

Here’s an edited video clip of Survé speaking at a meeting of the UCT Association of Black Alumni (UCTABA) on 7 April 2015. (source: UCT YouTube video) :

Additionally, many observers have speculated that the relationship between Survé and RMF leadership was “too close for comfort”. If such allegations are correct, Survé may well be in contravention of the South African Press Code.

Ramabina Mahapa, then SRC president and a founding member of RMF, confirms that there “was a close relationship between the movement and the Independent Group”.

Mahapa explains: “I would say that there was an element of wanting stories that would humiliate the University, one of the movements tactics was to create as much negative publicity for the university so that they would act… it certainly might have been the case that Iqbal was issuing directives to people in the Cape Times… because there was a widely known scandal around him and UCT at the time.”

Are the claims Price makes about Survé and the Cape Times correct or defamatory and are they in the public interest?  Respected South African media lawyer Emma Sadleir explains that defamation is “the unlawful and intentional infringement of someone’s reputation through the publication of content that both refers to that person and causes his or her reputation to be impaired”. In line with the constitutional right to freedom of speech, content is not considered defamation if it “is true and published for the public benefit,” she adds.

The questions remain:  Has the agenda of one man, Survé, influenced the narrative Cape Times readers receive? Is the independence of INMSA in the public interest? And ultimately, how independent is Independent Media really? DM

Ricky Stoch graduated with an honours degree in Transitional Justice from UCT in December 2016. The title of her research thesis was Framing Transformation: An Exploration into the Cape Times’ Coverage of the University of Cape Town During the Formation of Rhodes Must Fall.