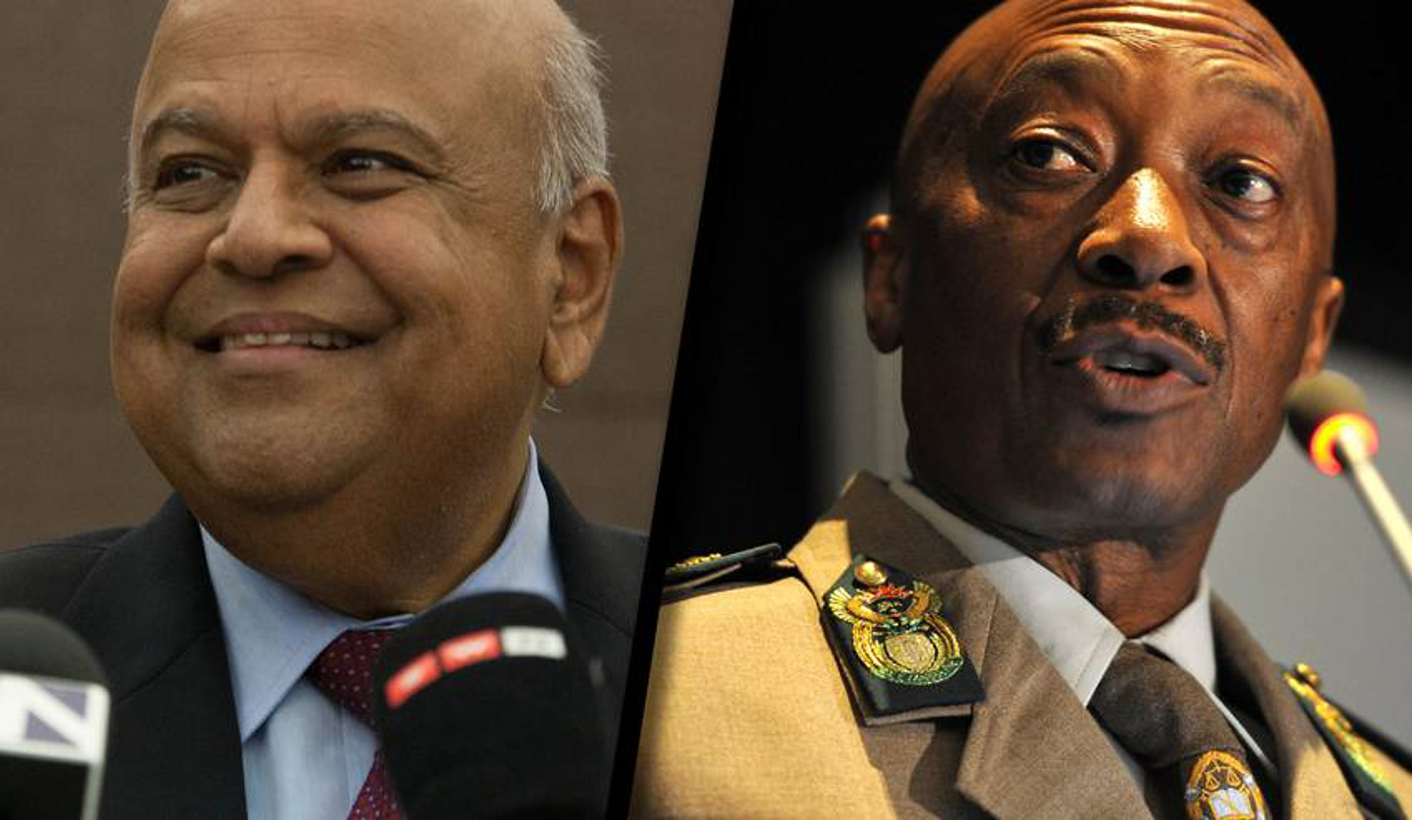 While SARS commissioner Tom Moyane has claimed that he did not lodge a charge against former Finance Minister Pravin Gordhan which served as a cover to wage an almost year-long witch hunt by the Hawks, led by the now disgraced and suspended Mthandazo Ntlemeza, evidence attached to court papers handed in to the Pretoria High court this week indicate otherwise. The tangled web at the embattled revenue service seems to be nudging Moyane into a corner. Or maybe not. By MARIANNE THAMM.

“Who you going to believe? Me or your eyes?”

Attached to a replying affidavit by SARS legal specialist Vlok Symington and deposed at the Pretoria High Court on Wednesday is a computer-generated SAPS record of a complaint lodged at 5pm on 16 May 2015 at the Brooklyn, Pretoria SAPS listing one Mr Thomas Swabihi Moyane as the complainant.

Covering all bases, an alternative charge was also lodged. This one under Act 94, 1992 Section 1 “prohibition on offer or acceptance of benefit for commission of an act in relation to certain powers or duties”.

The CAS number listed is 427/5/2015. The complaint was fed into the system, which is required before it can be investigated, at 7.15pm the same night. The scene of the crime is listed as Bronkhorst Street, Pretoria, SARS La Hae La SARS.

The CAS number was used by the Hawks as a sort of roving target, at first landing on Gordhan when he was sent the infamous 27 questions by Ntlemeza shortly before he was to deliver his budget speech in 2016 and later, when that failed, to pursue former SARS deputy Commissioner Ivan Pillay and Commissioner Oupa Magashula.

On 11 October that year NPA head Shaun Abrahams called a national press conference to announce that charges of fraud would be brought against Gordhan, Magashula and Pillay. These charges essentially initially related to allegations of a “rogue unit” that had been established within SARS.

It was only when the Helen Suzman Foundation and Freedom Under Law alerted the NPA to the fact that a memorandum that Symington, SARS legal specialist, had signed off in 2009 and which set out the legality of Pillay’s early retirement that the NPA was forced to withdraw charges against Pillay and Magashula.

The record of Moyane’s lodging of this complaint is contained in Vlok’s replying affidavit who has approached the court for an urgent interdict to stop disciplinary action against him after an internal investigation by a law firm into the “hostage drama” that occurred in the boardroom of the SARS head office in October 2016.

Vlok, in his original affidavit, sets out how he was instructed on 18 October by the NPA’s Dr Torie Pretorius to reply to a set of questions regarding his memorandum. Pretorius in turn instructed the Hawks head of the Crimes Against the State Unit, Brigadier Nymameka Xaba, to obtain an affidavit from Symington.

Symington was summonsed on 18 October to the office of  his immediate superior, Kosie Louw, SARS Chief Officer Legal Counsel Division. There he was handed a four-page bundle of documents with Pretorius’ questions. Later that morning Symington met with Xaba and three other men who introduced themselves as senior officers with the Hawks.

What Symington did not know was that in the bundle he had been handed was an opinion by SARS own legal firm, Mashiane, Moodley and Monama’s David Makhapela, who had acted for the revenue service during the “rogue unit” saga, and stating that he could not be involved in this episode of the drama for “ethical reasons”.

It was this communication that Xaba, the other Hawks officials as well as Moyane’s bodyguard, Thabo Titi, attempted to retrieve from Symington, after realising the mistake. They held Symington hostage in the boardroom, a crime he filmed with his cellphone.

Symington was later disciplined by SARS and charged with making public a “protected disclosure” after he had approached IPID to complain about Xaba. IPID has subsequently completed its investigation and has recommended to the NPA that Xaba be charged. The NPA has, unsurprisingly, not acted.

Symington approached the Pretoria High Court for an urgent interdict to halt disciplinary proceedings against him. The disciplinary proceedings were originally to be conducted SARS-appointed private law firm, Phatshoane Henney Attorneys, implicated in the Panama Papers with regard to illegal tax havens. When this was pointed out the firm was replaced by Mothle Jooma Sabdia.

In May this year the firm compiled a report that exonerated Symington but then a surprise addendum was later added in July that he be charged.

“This came as a complete surprise to me. Not only had the terms of the investigation clearly been expanded, but as is apparent from the introduction to the Addendum report, SARS had unilaterally approached Mothle (the investigating attorney) on 24 May 2017 with instructions on extending the mandate to investigate my conduct insofar as it evidences an apparent breach of employer/employee trust relationship.”

In his  c0nfirmatory affidavit responding to Symington’s Moyane denied that he had lodged charges against Gordhan.

“I did not lodge any criminal complaint against Mr Gordhan as alleged by the applicant,” said Moyane in his sworn statement.

SARS spokesperson Sandile Memela responded on Tuesday that “SARS has previously made it clear and wishes to reiterate that Commissioner Tom Moyane did not open a case against Mr Pravin Gordhan. Matters relating to criminal prosecution are best referred to the relevant law enforcement agencies”.

SARS is essentially passing the buck on to the Hawks and the NPA.

In his replying affidavit Symington refers to a press conference (attended by this journalist as well as Daily Maverick colleague Marianne Merten) in which then Minister of Police Nathi Nhleko confirmed that it was Moyane who lodged the original complaint against Gordhan.

During this conference and in reply to a question by Merten as to who it was that laid the charge Nhleko replied: “The issue of the… the issue of the complainant… who? You are asking who?…Okay, the Accounting Officer for SARS is the Commissioner for SARS, so specifically it’s him who went to the police and, and, and basically complained about the issue as having surfaced, for an example… and allegedly also on the basis of some confessions that were also made by other members of the… of the unit…”

Moyane’s denial that he is the complainant in the matter is disingenuous and while he did not specify any particular suspects in the commission of the crime he reported, the case was used to hound Gordhan, Pillay and Magashula.

What was also revealed in Symington’s replying affidavit to the court this week is the apparent disarray SARS finds itself in.

In an attachment Andrew McConnel, a partner in the law firm Brazington & McConnell acting for Symington writes that the responding affidavit by SARS “was extremely poor with the majority of the affidavit being illegible”.

After McConnell had contacted SARS attorneys to arrange for the original affidavit to be delivered to the court it became evident that the affidavit that was being brought “was not the same as the affidavit served on my offices on the 6th of September 2017, as it appeared that there were amendments both to the affidavit as well as the annexures”.

Meanwhile, Moyane failed to testify at the CCMA constructive dismissal hearing on Thursday of one of the casualties of the entire sordid “rogue unit’ saga, former spokesperson Adrian Lackay. SARS had submitted throughout the hearing that Moyane would be called to discount Lackay’s testimony but SARS closed its case on Tuesday without calling further witnesses.

Judge Hans Fabricius will be hearing closing arguments in the Symington matter at 2pm on Thursday. It will then be up to the court to decide whether Tom Moyane has perjured himself with regard to not being the key instigator in the hounding of Pravin Gordhan. DM