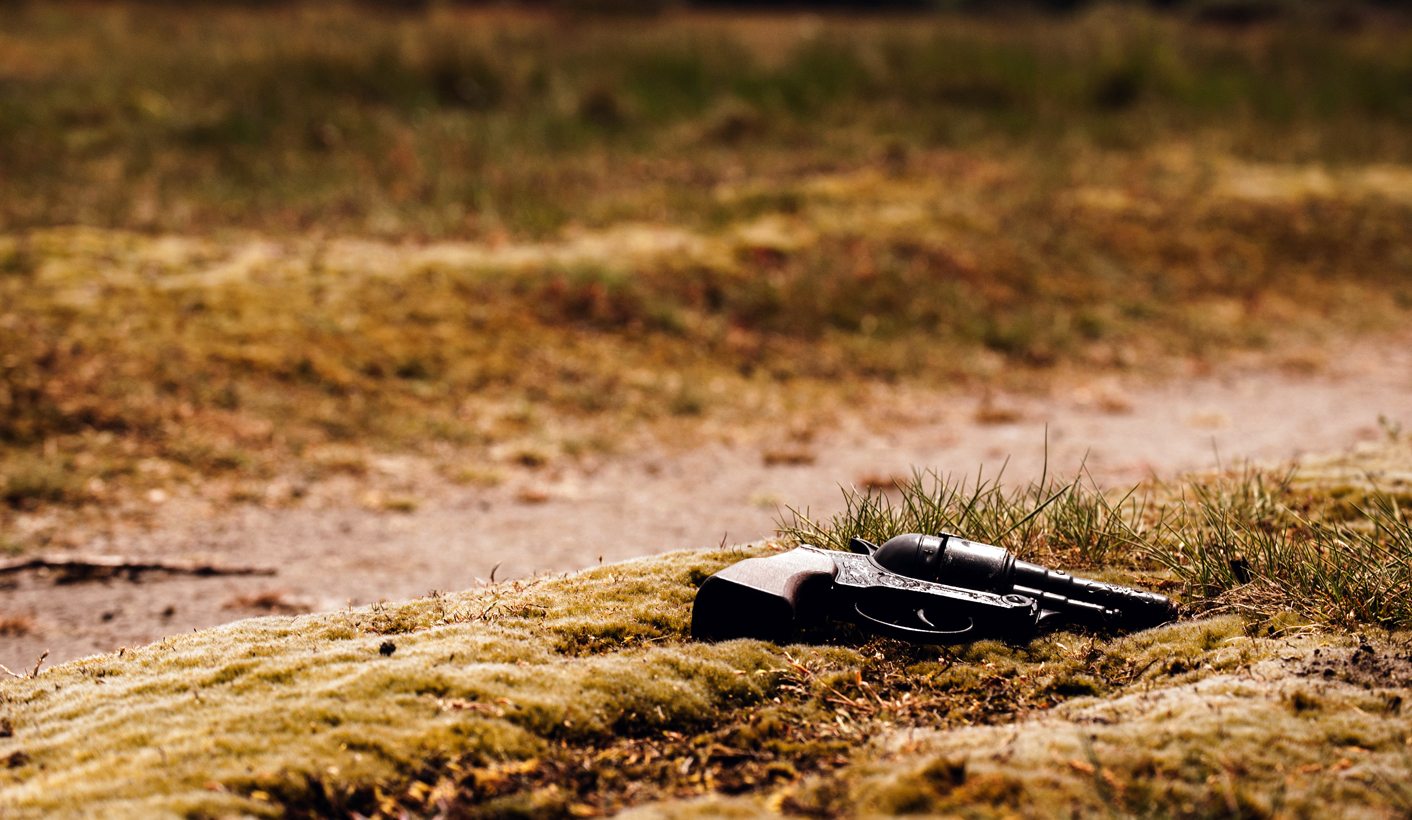 While Minister of Police Fikile Mbalula announced an investigation into the disappearance of around 30 police-issue firearms from the Mitchells Plain and Bellville charge offices, it is common knowledge that much of the gang violence in Cape Town has been fuelled by the sale of guns to criminals by members of the SAPS. In August, the Cape Labour Court ruled that two of the province’s most senior anti-gang specialists, Peter Jacobs and Jeremy Veary, be reinstated in their jobs after they had been unexpectedly shafted by former acting National Commissioner Khomotso Phahlane. However, SAPS national leadership is appealing the ruling. There is something deeply rotten in the state of the SAPS in the Western Cape. By MARIANNE THAMM.

One of the more controversial assertions Major-General Peter Jacobs, the shafted Provincial head of Crime Intelligence in the Western Cape, made in his submission to the Labour Court earlier this year is that the SAPS could be facing massive damages claims from the families of bystanders, many of them children, who have been maimed or killed while caught up in gang warfare that has raged unstoppably in the region for years. At least 261 children have been shot in the Western Cape between 2010 and 2016.

It was as a direct result of police negligence in overseeing the destruction of recovered stolen firearms between 2010 and 2014 that these firearms had flooded communities, Jacobs informed the court.

The former respected head of Crime Intelligence also said that investigations into criminal activity in the Western Cape had revealed that corrupt officials were supplying illegal firearms as well as illegally providing firearm licences to gang leaders such as Ralph Stansfield.

“The consequence of this illegal supply was the injury and death of a large number of people. Self-evidently this use of weapons should have necessitated the increased allocation of resources to recover them and prevent further killing in the public interest. The SAPS elected to do the opposite; 1,060 murders had been committed with these weapons between 2010 and 2014. This figure will grow exponentially unless the firearms are recovered. Scores of children under the age of 18 years were injured or killed,” Jacobs informed the court.

He added that former police Colonel Chris Prinsloo, former head of the Gauteng firearms registry who has been sentenced to 18 years for his role in the theft and sale of guns to gangsters, had not acted alone and that approximately 1,200 firearms had not yet been recovered and were likely to be used in more murders.

“Part of our investigation was to trace and recover the firearms, identify the people using them and to bring them to justice. We have been advised that the investigation will not end with the Prinsloo case,” said Jacobs.

On 3 August this year the labour court handed down a ruling setting aside the sudden demotion in June 2016 of Jacobs as Head of Crime Intelligence to cluster commander in Wynberg, as well as that of Major-General Jeremy Veary from Deputy Provincial Commissioner: Crime Detection to Cluster Commander Cape Town Central.

Both these new positions are regarded as “benign” and the transfer of Jacobs and Veary appears most certainly to be an attempt to neutralise them.

“Instead of curtailing such exposure (that SAPS could be held liable for the deaths due to the theft of state-issued weapons), the SAPS has elected to curtail our investigations by transferring us and decimating the team we supervised,” said Jacobs. Jacobs and Veary suggest in court papers that they were about to make more arrests when they were suddenly removed from the operation.

And while the court in August ruled that both seasoned policemen who spearheaded successful anti-gang campaigns in the region immediately return to work, National SAPS leadership is appealing the decision.

The highest command of the SAPS is in essence in contempt of court, having informed Jacobs that he may not return to his job in spite of the court ruling.

The question that must be asked then is why would SAPS leadership, with the apparent blessing of the minister, be so opposed to two experienced and fearless police officials returning to a job they appear to have been doing well?

There has been no real explanation from Minister Fikile Mbalula or a succession of national commissioners or acting commissioners who have played musical chairs in the top job while the country burns and bodies pile up in the Western Cape.

Some of the mystery is cleared up in the Labour Court judgment itself which refers to both Jacobs’ and Veary’s earlier affidavits in the case challenging their demotions.

“At a national level, third applicant (Veary) and I were tasked and instructed during April 2016 by the then Acting National Divisional Head of Crime Intelligence (Major General Makhele) to develop an approach to address and combat inter-provincial taxi conflict between Gauteng and KwaZulu-Natal provinces. A report and project were duly produced including implementation guidelines.”

Did Jacobs and Veary, using the Prevention of Organised Crime Act, follow the money trail which may lead to powerful political players?

What is clear is that Jacobs must have found something. After all, he produced a report as well as implementation guidelines.

In his book Hitmen For Hire, criminologist Mark Shaw reveals that 42% of hits in South Africa between 2000 and 2016 were related to taxi violence. It is one of the key areas where there is a lethal and toxic intersection between organised crime, business, the SAPS and regional politics.

Veary, in his affidavit to the court, set out that he is an expert on gangs, particularly in the arena of intelligence and detective investigation. Veary had been involved in Slasher, an anti-gang operation, as well as counterterrorism operations. Veary has been consulted as an expert in gangsterism yet, he says, his skills are not being used in the attempt to resolve or curb gang violence in the Western Cape.

Jacobs and Veary unexpectedly learned of their demotions in June 2016 when they received letters informing them of such. Later a notice issued by the Provincial Commissioner of Police, Khombinkosi Jula, calling on all Deputy Provincial Commissioners, Cluster Commanders, Provincial Heads and Station commanders to a meeting in Cape Town that had been scheduled for 13 June. The stated purpose of this meeting was ostensibly to discuss the placement of Cluster Commanders in the province in line with a new cluster concept.

However, according to court papers, Jacobs met General Ngwenya at the meeting who informed him that he [Jacobs] would in fact be transferred to Wynberg. This came as a shock, he says, as he had not been given any notice or been provided with any reason for the transfer.

Jacobs was informed that then acting commissioner Khomotoso Phahlane would explain this in a plenary session at the meeting.

Veary recounts that it was during this session later in the day that Phahlane had promoted five Brigadiers to the rank of Major-General. One of these Brigadiers was Major-General Mzwandile Tiyo, who then replaced Jacobs in the key post as Head of Crime Intelligence.

In 2014 Tiyo had instituted proceedings in the labour court asking to be appointed as provincial head of Crime Intelligence. In that matter Tiyo revealed that he had applied for the post but had been later advised that it was no longer open.

Tiyo had contended that the then National Commissioner Riah Phiyega and the then Provincial Commissioner Arno Lamoer had conspired to withdraw the post in order to frustrate his application and that they had decided instead to appoint Jacobs.

An angry Tiyo told the labour court that Jacobs had been “instructed” to find reasons to discipline and dismiss him. Jacobs in turn had revealed that he had been informed that Tiyo was not suitably qualified for the senior position, that he did not have matric, and most crucially, had not received the required security clearance.

The labour court ultimately ruled that the repondents in the matter, including the Minister of Police, the acting National Comissioner, and the Deputy Commissioner of Human Resource Management, had failed to provide any evidence of open and accountable decision-making “such as to conform to minimum standards of lawfulness and non-arbitrariness” and that the decision to transfer both Veary and Jacobs had to be set aside

The court also ruled that the decision be “reverted” to the various respondents and that Jacobs and Veary should be provided the opportunity to make representations to decision-makers.

And just to rub salt into the wounds of an SAPS eating its own, the court ordered the Minister of Police and SAPS to pay the legal costs of Jacobs and Veary.

It is utterly tragic that while the law-abiding residents of the Western Cape are held hostage and terrorised daily by gangs using guns sold to them by p0lice, the leadership of the SAPS should seek to remove two men who have dedicated their lives to fighting crime.

Make no mistake, Jacobs and Veary will not go quietly no matter how ugly the fightback. They know too much. DM