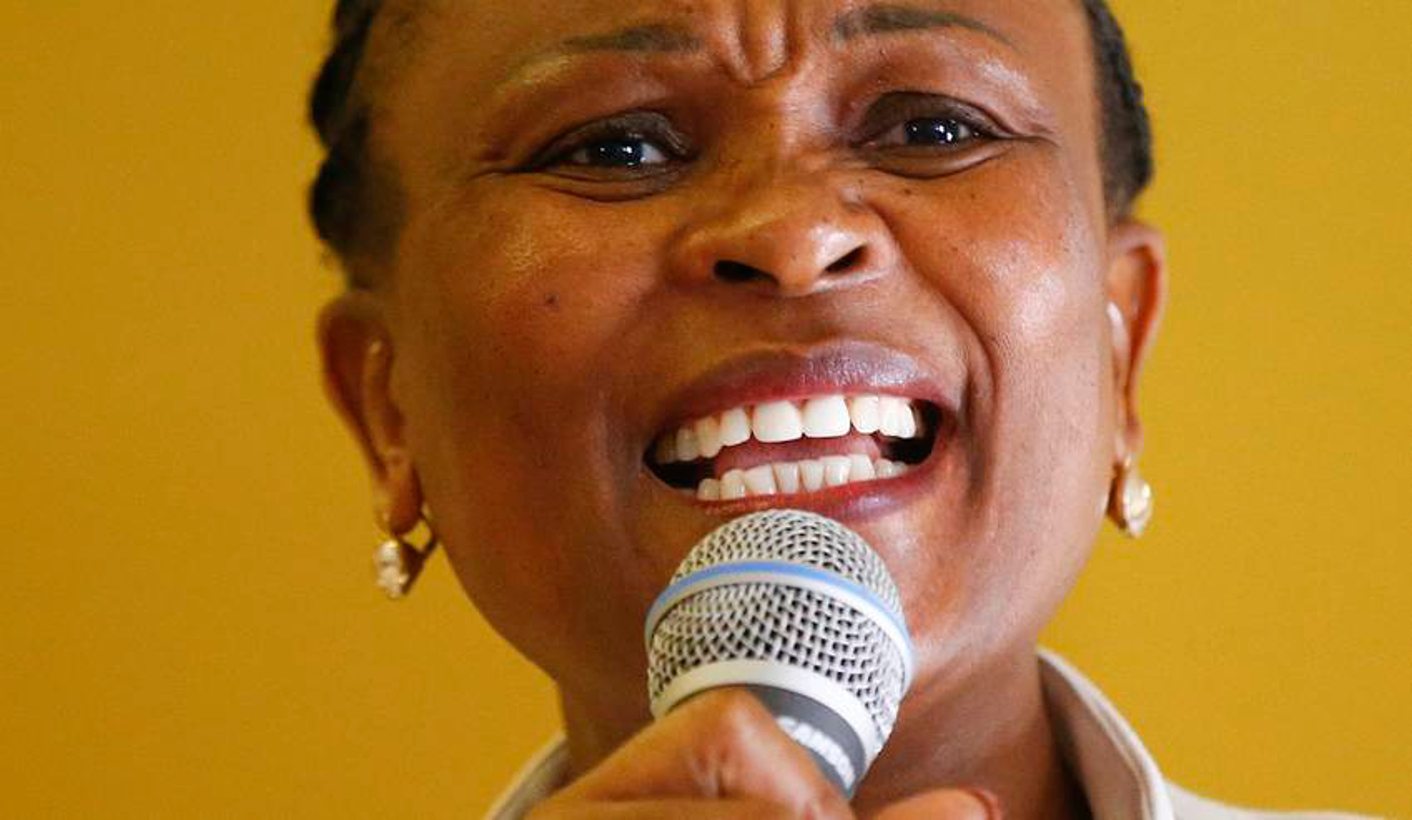 An explosive affidavit filed by the South African Reserve Bank in the Pretoria High Court on Tuesday has confirmed suspicions that Public Protector, Busisiwe Mkhwebane, colluded with President Jacob Zuma's legal advisers and the State Security Agency to use an investigation by her office into a 1985 SARB bailout of Bancorp to launch an attack on the independence of the South African Reserve Bank. The affidavit also suggests Mkhwebane lied about meeting “the Presidency”. The revelations most certainly offer grounds for reviewing Mkhwebane's appointment to the vital position and implicate the President in her unlawful behaviour. By MARIANNE THAMM.

In his supplementary founding affidavit, South African Reserve Bank lawyer Johannes De Jager does not hold back on what records extracted, apparently with difficulty, from the office of Public Protector Busisiwe Mkhwebane reveal about what transpired before the release of her CIEX report in June this year.

On June 7, 12 days before she released her report calling for an amendment of the Constitution to allow parliament to alter the powers of the SARB, Mkhwebane’s record reveals that she met with President Zuma’s legal advisers and that by this date she had vastly expanded the reach of her investigation into the “Absa bailout”.

Mkhwebane, says De Jager, also lied about this meeting – sorry, she “had not been frank” – about disclosing it until later. The SARB supplementary affidavit also reveals that the Public Protector, in notes of a meeting with the State Security Agency, had discussed the question “how are they vulnerable?” in relation to the SARB.

By the time she met with the Presidency, says De Jager, the Public Protector “was clearly considering remedial action aimed at expanding the reach of an SIU investigation into the CIEX report. It was also clear that by this stage, she was considering remedial action aimed at amending the Constitution to deprive the Reserve Bank of its constitutionally entrenched power to protect the value of the currency.”

De Jager’s affidavit claims “bias, ulterior purpose and procedural unfairness” as new grounds for a review. He laments that the SARB affidavit, which has been filed in compliance with a directive issued by the Judge President on 1 August, has been “severely prejudiced”  by the fact that “the record of proceedings provided by the Public Protector is woefully incomplete, confused and indecipherable in parts.”

The record did not contain transcripts of the interviews conducted by Mkwebhane with Holocaust denier, Stephen Goodson, and the State Security Agency, also lacked a detailed index, but did include correspondence both before and after the meetings were held, as well as handwritten notes of the meetings.

The notes of her meeting with President Zuma’s legal advisors comprised of eight pages but, says De Jager, appear not to have been written by Mkhwebane herself.

The last four pages of the notes record the PP’s interview with Goodson and refer to “remedial action to change the Constitution and the consequences of a state bank.”

“It is unclear whether all 8 pages are notes from the meeting with the Presidency’s legal advisors or whether the note of that meeting is confined to the first page. This would have been clarified, had a proper index been provided with the record. Unfortunately, none has been forthcoming,” said De Jager.

This meeting took place without any similar meetings being held with the other parties affected by the remedial action.

“The meeting was convened between the Presidency and an institution, the Public Protector, which is constitutionally required to be independent and to conduct its investigations impartially and without fear, favour or prejudice. If the subject-matter of the meeting covered all eight pages of annexure ‘SFA 2’, then it was highly irregular.”

The meeting, says De Jager, traversed the Public Protector’s proposed remedial action to amend the Constitution to deprive the Reserve Bank of its role in protecting the value of the currency.

If the subject-matter of the meeting covered only the matters reflected on the first page of annexure ‘SFA 2’ said De Jager “then the meeting was procedurally unfair and evidence of bias on the part of the Public Protector.”

After the Public Protector had decided substantially to change the remedial action of her preliminary report, she had been required to give affected parties an opportunity to comment on the new remedial action.

De Jager reveals that “there is a further document in the record which seriously calls into question the Public Protector’s impartiality in this investigation.”

This is a file note of a meeting with the State Security Agency on 3 May 2017 and which, under a section dealing with the Reserve Bank, reveals that the question “how are they vulnerable?” was posed.

The new record, says De Jager also disclosed even further grounds for review of the PP’s report and this was that “in its interactions with the Public Protector through-out this investigation, the Reserve Bank was at pains to explain the role that central banks play as the lender of last resort. The Constitution gives the Reserve Bank the power to act as a lender of last resort. Section 225 gives it all the powers and functions customarily exercised and performed by central banks. One of these functions is to act as the lender of last resort to prevent financial instability in the banking sector. The power is a discretionary one.”

The discretionary nature of the power given to the Reserve Bank means, says De Jager, that other organs of state, such as the Public Protector, “ought not lightly to interfere with its exercise. The Public Protector’s mandate is not to second-guess the expert determinations of the Reserve Bank. Her mandate is to pursue maladministration in the functioning of organs of state.” DM