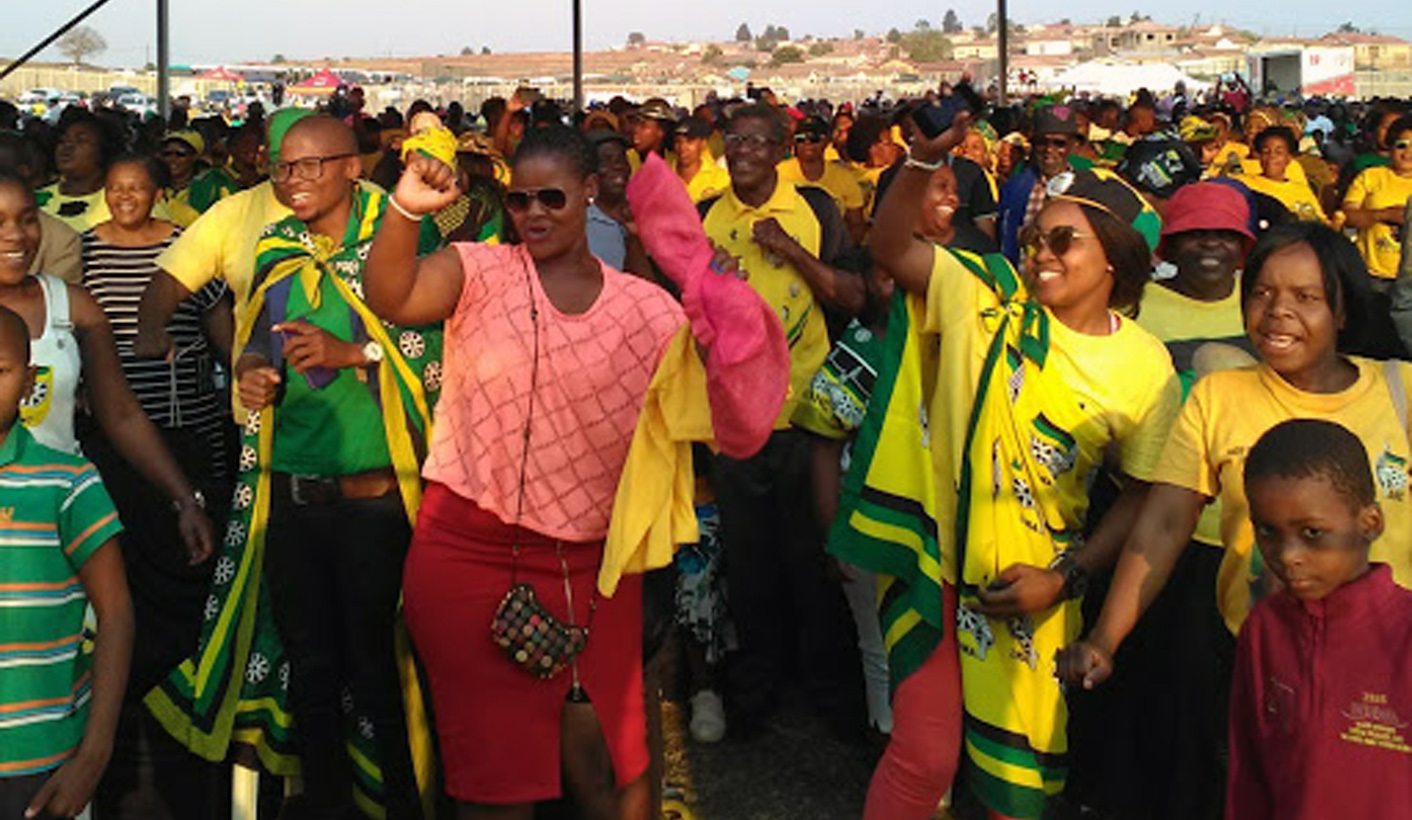 President Jacob Zuma appeared in good spirits as he prepared to move to consolidate his power, even as the ground is shifting in his home base of KwaZulu-Natal. Zuma cautioned the youth, without a hint of irony, against electing someone “who is just good at toyi-toying”, even as his detractors launched a counterstrike by airing rumours that Deputy President Cyril Ramaphosa is about to be axed. By CARIEN DU PLESSIS.

By the time President Jacob Zuma concluded his 70-minute speech and launched into Mshini Wami, the ANC Youth League Sunday crowd – consisting of young and old – was eating out of his hand. In the hilly and dry KwaZulu-Natal battlefields, the sun was preparing to set.

It wasn’t without reason that he, fresh from deliberations on the Libyan conflict in Brazzaville in the morning, came straight to Ezakheni near Ladysmith – to church first, then to the dusty sports field just down from the local mall to celebrate the ANC Youth League’s 73rd birthday

“The youth league was always influencing the mother body [the ANC] on the method of struggle,” he said in what was mostly a lecture on the league’s history.

Like a teacher, or a preacher, he asked the crowd what freedom meant to them. Some volunteered it meant no longer carrying a dompas; another spoke about economic freedom, and two women stood up and said there was no freedom without land.

Zuma picked up and explained that the ANC no longer had the power it had in 1994 when there was a possibility of changing the Constitution with its two-thirds majority in Parliament.

“Young people must work hard towards December to ensure that they point out what must change,” he said, referring to policy, but also leadership.

Young people should watch out for those who were quick to raise their hands.

“If you have two people, one saying they are ready for leadership, and the other that they are not, who do you elect? Some people must not be confused about the leaders they want to elect. If they are confused, they will elect someone who is good at toyi-toying,” he said. The master dancer certainly wasn’t referring to Dlamini-Zuma, whose appearances at times seem to lack energy.

“Before the party elects leaders they must first look at the programmes and who are fit to lead those,” he said.

With a nudge and a wink, Zuma said he himself would also be voting in December. Even though he didn’t mention names, speaker after speaker vouched for Dlamini-Zuma.

Could his reference to the unworthy ones have included his former ally and ANC treasurer-general Zweli Mkhize, who last week indicated he was a full-on contender for ANC president, and who promptly on Saturday stood by Zulu King Goodwill Zwelithini’s side as bare-breasted virgins filed past them in one of the biggest cultural gatherings in the Zulu kingdom? Up to now, Mkhize was thought to have been a possible deputy on Cyril Ramaphosa’s slate at most.

Mkhize’s stepping up has further clouded the succession scene in KwaZulu-Natal, where the anti-Dlamini-Zuma lobby claim the ANC’s vote in the party’s largest and most significant province is more divided than ever.

Indications on the ground are that Mkhize could eat into both Ramaphosa’s and Dlamini-Zuma’s support base here, throwing the best-laid plans of the two camps into disarray.

On top of this, everyone in the province is on tenterhooks awaiting a court judgment over the validity of the party’s provincial conference in 2015. Should the decision go against the current provincial leadership, it would deal a huge blow to Dlamini-Zuma’s campaign.

So, Zuma’s speech had none of the barbs that came out at the policy conference a few weeks back, where he laid into the veterans critical of him. Former Robben Island prisoner Alfred Duma, who lent his name to the local municipality last year, even hinted that Zuma was a worthy commander-in-chief who would step down after December should the ANC need him to.

Perhaps Zuma, who thrives on adversity, realised he might still need some of his detractors in the next few three months, or perhaps Gedleyihlekisa has already planned the next shake-up – and if there’s truth to the rumour, this could be a brutal one.

Cabinet and caucus reshuffles are on the cards as Dlamini-Zuma, after five unemployed months back from her job as chair of the African Union Commission, is set to take her place in Parliament this week after making the party’s election list back in 2014.

When news of this broke on Friday, it unleashed a flurry of weekend rumours of the possible axing of Zuma’s detractors – like Higher Education Minister Blade Nzimande and Basic Education Minister Angie Motshekga – and the re-arranging of some others to fill positions like that left vacant by Mduduzi Manana when he resigned as deputy minister of higher education after admitting to assaulting a woman.

While Dlamini-Zuma, who was in high spirits a few days ago, refused to comment and Nzimande at a pro-Ramaphosa meeting disguised as a KwaZulu-Natal shop stewards’ meeting laughed off these rumours, ANC national executive committee member and deputy minister of agriculture, forestry and fisheries Bheki Cele dropped a bombshell at that same meeting by saying there were plans to axe Ramaphosa himself and cause enough chaos to postpone the December conference.

This gossip had been making the rounds in KwaZulu-Natal since at least Saturday and, although even Zuma’s sympathisers said at this point they wouldn’t put a vindictive and humiliating move like this past him, this would be a spectacularly stupid move.

It would release Ramaphosa to campaign full-time, and make him into an underdog, which ANC members seem to love. Zuma must surely recall this from his own axing as deputy president in 2005.

One of Ramaphosa’s lobbyists even said they would welcome it with open arms. Could this rumour have been planted by Ramaphosa’s guys themselves?

Back at the ANC Youth League gathering in KwaZulu-Natal, the young lions spared nobody. Provincial chair Kwazi Mshengu dived right in:

“In the ANC we had a number of doctors, but Makhosi Khoza [whose disciplinary hearing for speaking out against Zuma’s leadership was postponed on Sunday] is nothing but a traditional healer,” he said. Referring to Bheki Cele and the way he was sacked as police chief following a commission of inquiry, he said: “The president took you from the dustbin and made you deputy minister. Now you are singing for your supper for your preferred candidate to make you minister [should he get elected].”

Limpopo youth league deputy chair Thandi Moraka, who spoke English and not Zulu like the other speakers did almost throughout, went one up the food chain by launching a direct attack on her homie Ramaphosa.

“We say no to blesser tendencies,” she proclaimed with apparent reference to recent revelations of his affair as a married man with a woman eight years ago, and a number of alleged other ones.

She added that old men took advantage of women’s “economic status” and vulnerabilities by sleeping with them without using condoms.

It wasn’t meant ironically. Behind her, Zuma wasn’t even blinking. DM