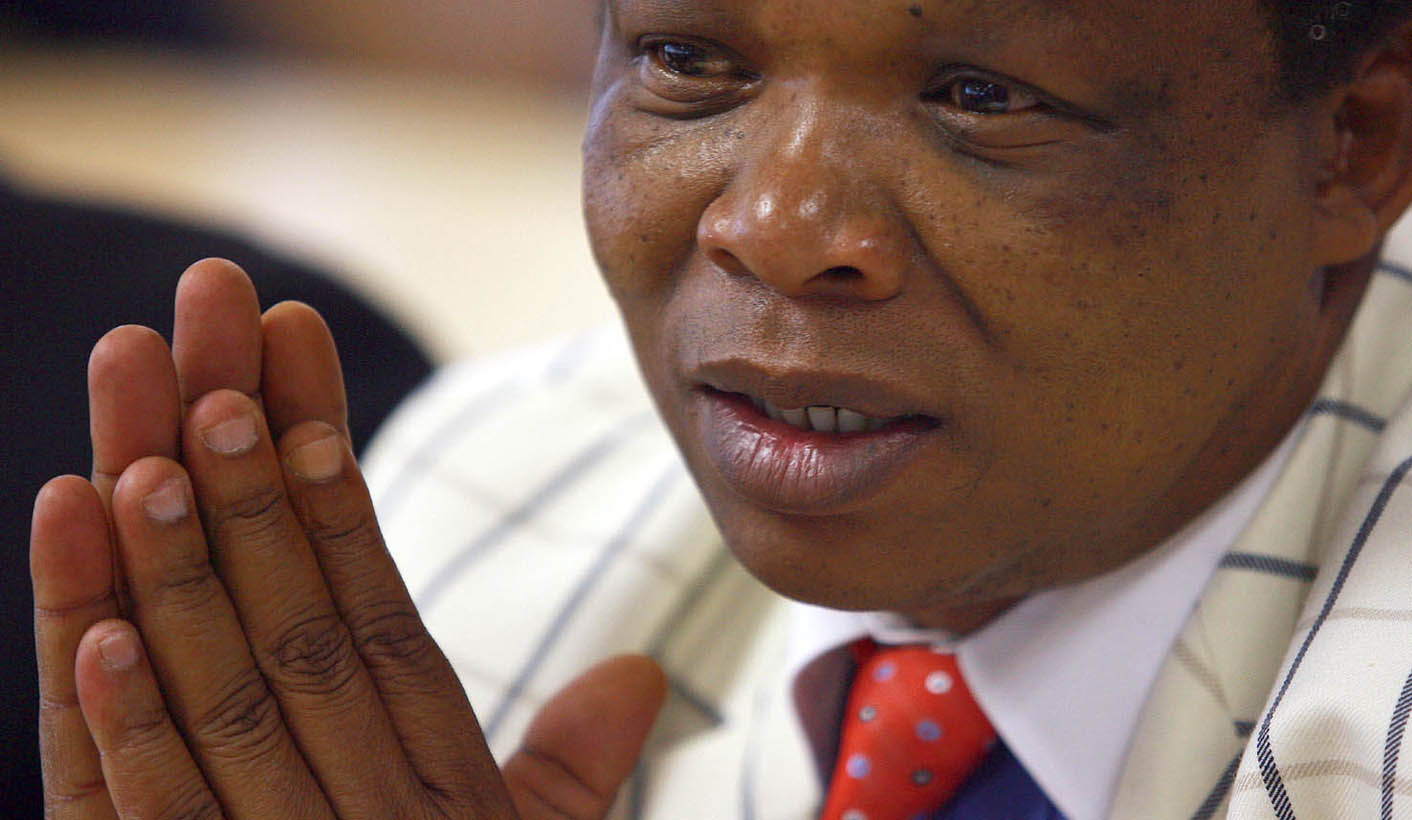 The likes of Jon Qwelane might try to claim their entitlement to bigotry based on the right to freedom of expression. However, seeking that protection – critical to an open society – is also subject to limitations. And in a court ruling last week, Jon Qwelane’s bigoted utterances against gays were declared to be hate speech. By MELANIE JUDGE.

Last Friday, the South Gauteng High Court delivered a long-awaited judgment in the hate speech case of journalist and political figure Jon Qwelane. In his judgment, Judge Dimpheletse Moshidi found that the article Call me names, but gay is NOT okay, written by Qwelane and published in the Sunday Sun in 2008, amounts to hate speech as contemplated in s10(1) of the Equality Act (the Act). Justice Moshidi stated that “the offending statements are hurtful and harmful and have the potential of inciting harm towards the LGBTI community, and plainly propagate hatred towards them”.

The court also found that Qwelane’s defence, which challenged the constitutionality of the Act, failed and was dismissed with costs. These outcomes hold significance beyond the specifics of the case, and should be read against local and global contexts where racist, sexist and homophobic hate speech is regaining political voice and traction. But let’s first turn to the context in which Qwelane’s article appeared.

At the time when Qwelane wrote his hate speech, significant research came out, such as a South African Human Rights Commission (SAHRC) report as well as representative studies about the discrimination and violence faced by LGBTI people. Also, against the backdrop of the achievement of marriage equality just two years prior, 2008 was a time of heightened public visibility of LGBTI lived realities, in particular that of black lesbians, in light of numerous high-profile homophobic murders. In this context, Qwelane’s article was met with a vociferous and vocal reaction, as seen in the unprecedented number of complaints to the SAHRC, as well as complaints to the Press Ombud, and protest action outside the offices of Nasionale Pers (owners of the Sunday Sun).

In sum, Qwelane’s article expressed support for Robert Mugabe’s notorious views on homosexuals (Mugabe is on record for referring to gay people as “pigs” and “dogs”); likened same-sex marriage to bestiality; justified homophobia by asserting that “wrong is wrong!”; claimed that being gay is unnatural, and argued that gay and lesbian equality rights should be removed from the Constitution.

In a tone antithetical to stimulating debate (a key argument in Qwelane’s defence), he also wrote, “Please tell the Human Rights Commission that I totally refuse to withdraw or apologise for my views”.

The provocation and offence of his words led the SAHRC to approach the Equality Court, seeking an apology and damages from Qwelane. The Psychological Society of South Africa (PsySSA) entered the fray as amicus curiae to present evidence on the psychological harm of Qwelane’s words to LGBTI people and to society at large. PsySSA argued for the importance of the hate speech provisions of the Act in stemming verbal and physical violence and maintained that these provisions meet constitutional muster. After various court processes and postponements, the equality case and the constitutional challenge were jointly aired in court this March.

Fast-forward to last week’s judgment. Nine years after the publication of the article, hate speech is increasingly being exposed and challenged. In declaring that Qwelane’s utterances constitute hate speech, the court ordered that he pay the full costs of the proceedings including the postponement and senior counsel. He is also to tender an unconditional apology to the LGBTI community, the content of which is to be agreed to by the parties. That apology is to be published in a national newspaper with the same or equal circulation as the Sunday Sun, and is to be furnished to the court. Significantly, Justice Moshidi also referred the proceedings to the National Police Commissioner to further investigate reports of hate crimes to the police that were revealed in the evidence of People Opposing Women Abuse and of an in-camera witness called “MN”.

Qwelane’s no-show during the trial suggests his contempt for the SAHRC, as expressed in his article at the outset, and for the equality proceedings. That Qwelane was promoted to the position of ambassador to Uganda shortly following the publication of his article might have something to do with his continued brazenness. It also illustrates how normalised homophobia is, in that he received state-sanctioned approval of his homophobic views with the promotion to ambassadorship in a country rife with homophobia. It is this normalisation of homophobic bigotry that equality proceedings might also begin to challenge.

With regards to the constitutional challenge, the court rejected Qwelane’s contention that the Act’s hate speech provisions are vague and too broad. Rather, it affirmed that the provisions be read in recognition of the harmful and hurtful effects of hate speech. In approaching hate speech in its proper context, the court placed a reasonable and justifiable limit on Qwelane’s right to freedom of expression. It also noted that when applying the Act, “the existence of systemic discrimination and inequalities, particularly in respect of race, gender and disability in all spheres of life as a result of past and present unfair discrimination brought about by colonialism, the apartheid system and patriarchy, should be considered”.

The Qwelanes of the world might try to claim their entitlement to bigotry based on the right to freedom of expression (entrenched in s16 of the Constitution). However, seeking that protection – critical to an open society – is also subject to limitations. These limits, in which historical conditions of systemic oppression are crucial, are also related to the wider pursuit of a democracy based on principles of human dignity and equality. They are also critical in a global context in which the rise of the right is accompanied by its active co-option of the language of rights, in particular freedom of speech.

Under the pretext of freedom of expression, anti-Semitic and racist speech abounds – think recent events in Charlottesville in the US and the rhetoric of white supremacy. Yet free speech premised on the denial of the freedoms of others (such as Qwelane’s call for the rights of gay people to be stripped, and for us not to be regarded as fully human) cannot be a legitimate legal claim. In a curious twist of legal fate, Qwelane’s only witness, former Production Editor of the Sunday Sun (the publisher was let of the hook in the SAHRC’s legal case) Ben Viljoen, testified in court that the article never should have been published. It was stated in the judgment, and as PsySSA senior counsel Kate Hofmeyr argued in trial, “It is plain that the offending statements were not produced in order to encourage debate on homosexuality, but rather to persuade readers of his own views, to position his homophobia and invite others to join him in it.”

Supremacies based on whiteness, maleness and/or straightness are frequently underwritten by discourses of dehumanisation. In considering the hurt and harm of the speech, Justice Moshidi contended, “It can never be acceptable, in the context and content of equality legislation and our democratic society, to equate human beings to bestiality or animals, and suggest to them that they are ‘other’ or ‘unnatural’”.

Whether against black people, women, queers, or a combination of these identities, the denigration of the equal worth of a stigmatised “other” lends legitimation to assertions of superiority. In seeking to dismantle the structures of inequality that produce and maintain hierarchies of power and privilege, words – and the contexts in which they are uttered – do matter. In times of Trump and Zuma, and the ethno-chauvinisms their regimes feed off, this matter(ing) of words is all the more pressing.

The Equality Act, put in place to prevent and prohibit unfair discrimination, is a means through which the prejudice of the powerful can be brought to book through civil proceedings that seek to further the course of justice and equality. The judgment reasserts this restorative pursuit, and also how ordinary people continue successfully to challenge the psychological and material effects of hurtful and harmful speech and the patterns of systemic prejudice that give that speech its power.

The message of this case is, right back at you, Jon Qwelane: “Don’t call us names, and gay is okay’.” DM

Judge is an adviser to PsySSA and an adjunct associate professor in the Law Faculty at the University of Cape Town. Her book, Blackwashing Homophobia: Violence and the Politics of Sexuality, Gender and Race, will be released in September.

Photo: Nine years after publication of his column, Jon Qwelane’s utterances were declared hate speech in court last week. He is seen here in a file photo in Johannesburg in April 2008. Werner Beukes/(SAPA)