Marikana Five Years Later: Thousands gather on the koppie to pay tribute to the 34 miners 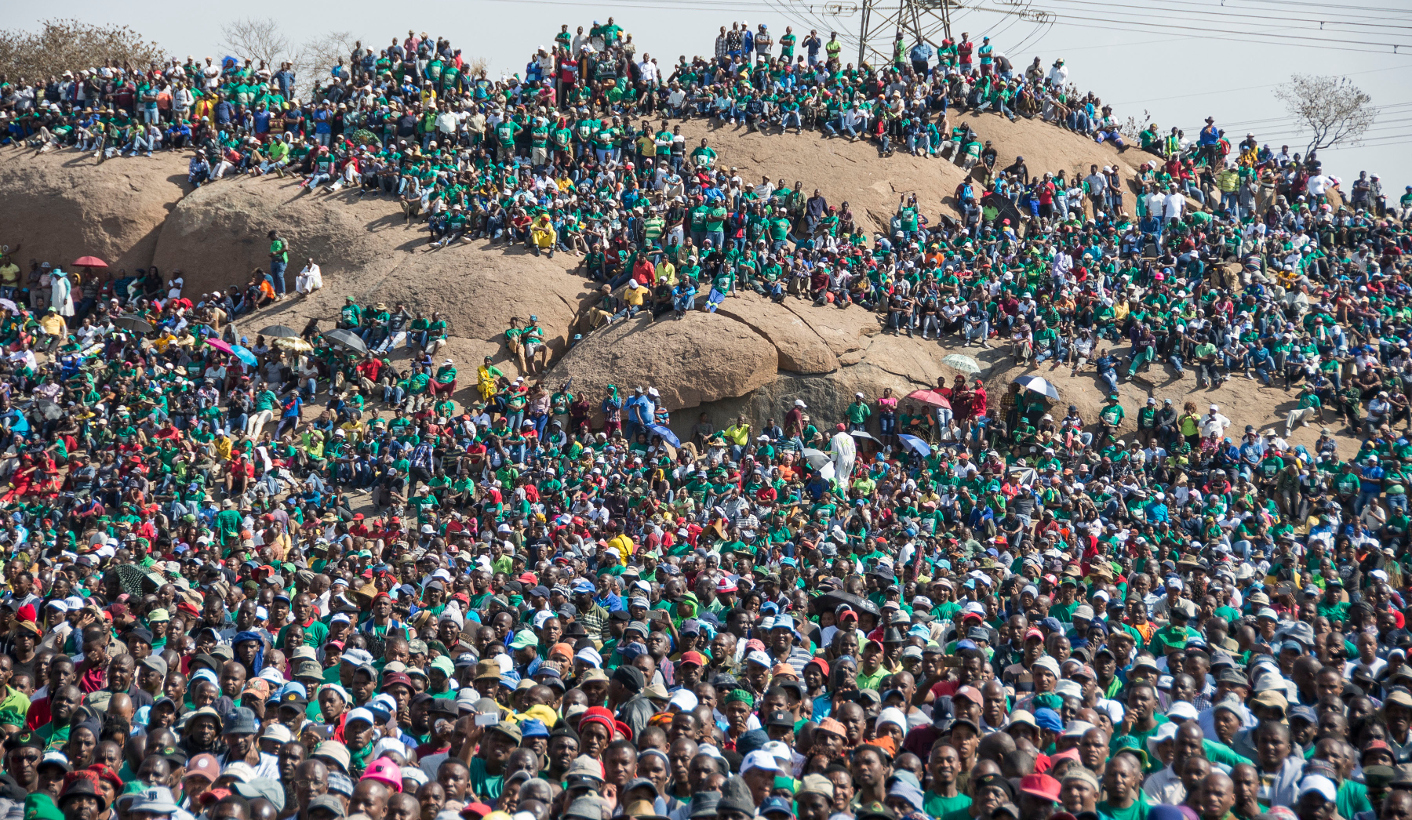 On the fifth anniversary of the Marikana massacre, thousands of mine workers made their way to the open field of the site where 34 striking miners were killed and hundreds injured within minutes by police. By IHSAAN HAFFEJEE.

Miners wearing AMCU outfits can be seen making their way to the scene of the fifth anniversary of the Marikana massacre passing the famous koppie. They were singing songs honouring those who were killed by police.

Miners waving their sticks make their way past the koppie. They were singing songs honouring those who were killed by police.

Wearing AMCU decorated clothing, miners made their way towards the commemoration. The union which led the strike five years ago is now been recognised as the dominant union at Lonmin.

A mine worker displays the skull and horns of a bull during the commemoration of the killed mine workers as workers sang songs honouring those who were killed by police.

Miners attending the fifth anniversary of the Marikana massacre make their way towards the main crowd. As yet no police officials  or politicians have been charged or held to account for what happened on that day five years ago.

A miner attending the fifth anniversary of the Marikana massacre covers his face with a green blanket which became a symbol of the protest five years ago as it was worn by protester Mgcineni Noki who was killed during the strike. As yet no police officials or politicians have been charged or held to account for what happened on that day five years ago.

Wearing a hat with horns, Edwin Kubake, a miner from Lesotho who works on the Platinum belt, said that as a member of AMCU he has found that things have got slightly better with regards to the amount of money that miners earn.

Widows and family members of some of the miners who were killed can be seen on the stage during the fifth anniversary of the Marikana massacre. They were given flower wreaths which they placed on the spots where their family members were killed.

AMCU President Joseph Mathunjwa, centre, is led through the sites where miners were killed by some of the survivors. He made his way towards what is known as the second smaller koppie where police hunted down fleeing miners and shot some of them dead.

From left, EFF leader Julius Malema, advocate Dali Mpofu and AMCU President Joseph Mathunjwa on stage during the fifth anniversary commemoration of the Marikana massacre. Addressing the crowd Malema said that there was no difference between the killings in Sharpeville and Soweto and those that happened in Marikana five years ago. “Working class people were killed by the government. We must continue to remember this day so that government does not repeat a similar mistake,” Malema said. DM

Photo: Thousands flocked to the open field near the scene of the Marikana massacre to listen to AMCU President Joseph Mathunjwa and other political leaders. Photo: Ihsaan Haffejee