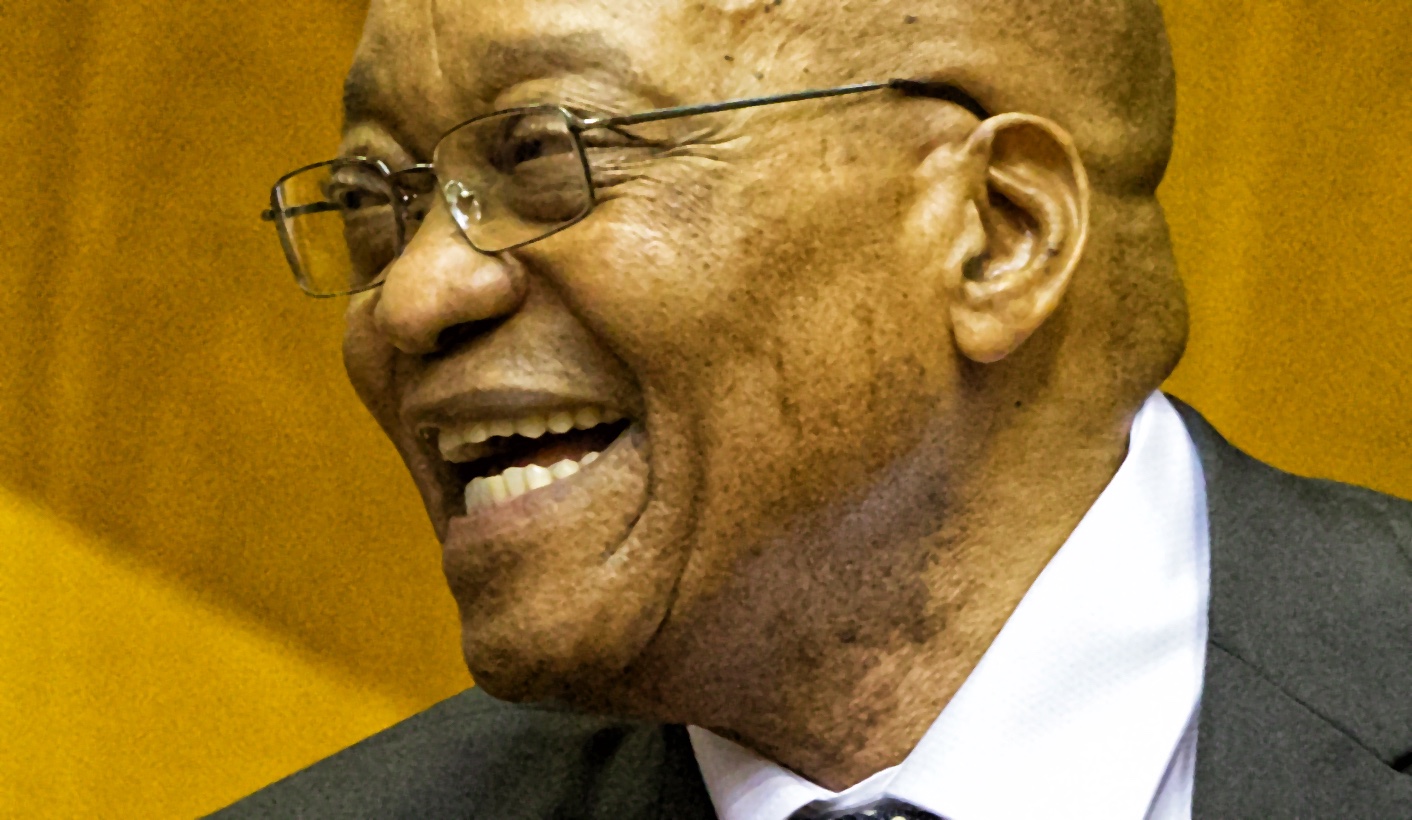 President Jacob Zuma has regularly told church leaders that they “must mind their own business” and rather “pray for their leaders to do better”. BJ Vorster and PW Botha did the same. Zuma’s latest comments were made after, among others, the South African Council of Churches urged ANC MPs to remove Zuma by voting him out in last week’s no-confidence vote. Zuma claimed that such sentiments were “un-Christian” and that “believers should pray for their leaders to do better”. He said this again last weekend when addressing St John’s Apostolic Faith Mission Church in Evaton, south of Johannesburg. Just like church leaders ignored Vorster and Botha, they will, no doubt, ignore Zuma. By RUSSELL POLLITT.

On 25 July 2017, the chair of the South African Council of Churches (SACC), Bishop Malusi Mpumlwana, dismissed President Jacob Zuma’s regular mantra to religious leaders that “churches must mind their own business”. Zuma may have missed this. He did this when making remarks to Parliament’s Portfolio Committee on Public Enterprises. Mpumlwana said: “We never dreamt in our wildest dreams that there would come a time in democratic South Africa when political leaders could take on the Vorster-Botha chorus: churches to the altars and pulpits, and leave politics to politicians!” In the 1970s and ‘80s, white conservative Christians often took this standpoint: no politics should be allowed in the church. It was not uncommon for some to walk out of churches in protest if a religious minister spoke out about what was happening in the country.

Bishop Mpumlwana did not mince his words: “The standard refrain has been that church leaders should restrict their focus on ‘spiritual matters’ and stay clear of political pronouncements. It seems appropriate that we should… make it clear once and for all that those who make such calls on churches are either genuinely ignorant of the nature of the Christian faith, or are simply being disingenuous. While we suspect that the latter might be the case, we consider it worthwhile providing for those who may be genuinely ignorant.”

He reminds the current government that the call for churches and the SACC to confine themselves to the sanctuary was a “chorus” favoured by apartheid leaders like John Vorster and PW Botha.

During apartheid it was often the religious community that assisted individuals, like Zuma, and the liberation movements. This ranged from calling on the apartheid state to end apartheid, unban the liberation movements, release political prisoners and accept the inevitability of a transition to a democratic, non-racial state, through providing resources within the churches that supported and trained activists in community organisations and trade unions, to in some cases clergy actively working within underground revolutionary structures. There was even an ecumenical ANC Religious Affairs Department, in effect a chaplaincy to the movement.

It was church-run schools that provided educational resources and opportunities for those the government of the day refused to educate, including the children in many cases of political prisoners, detainees and banned people. Church schools were at the forefront of defying the government and allowing children of all colours into their establishments. In 1977, the government ordered racially integrated Catholic schools to expel non-whites. The church refused. It was often churches that ran clinics and hospitals in far-flung rural places.

Religious buildings were used for meetings to mobilise people and, at times, as sanctuaries for people fleeing from the brutality of apartheid security forces or police. The Catholic Church of Regina Mundi in Soweto still bears the scars inflicted by apartheid police on its walls. The headquarters of the Southern African Catholic Bishops’ Conference, in Pretoria, was bombed by apartheid security forces in opposition to their criticism in 1988, as was Khotso House, the headquarters of the South African Council of Churches in Johannesburg.

It was the SACC with global bodies like the World Council of Churches, in particular the latter’s Programme to Combat Racism, which unapologetically supported the liberation movements. These movements were supported “materially and politically through the justification of the just cause of the liberation struggle”, Mpumlwana said. He went on to quote one of his most distinguished predecessors, Archbishop Desmond Tutu: “The whole of life is important; political, economic and social, and none of these aspects is untouched by religions as we understand it… Where there is injustice, exploitation and oppression, then the Bible and the God of the Bible are subversive of such a situation.”

Mpumlwana, in his remarks, bluntly reminded the country’s leadership of the churches’ position: “… the SACC never did in the past, cannot today and will not in the future refuse to address national issues in relation to public ethics, be it the unethical apartheid or unethical corruption, greed or the usurpation of State institutions for private benefit and against the public good”.

South Africa boasts several religious leaders, like Archbishop Denis Hurley who, even in the face of being taken to court and indicted for treason, could not be gagged by the then government. Archbishop Desmond Tutu is lauded all over the world and was a constant thorn in the flesh for the apartheid government. In 2011, Tutu warned the Zuma-led government that he would pray for their downfall. “Mr Zuma, you and your Government don’t represent me. You represent your own interest and I am warning you. I really am warning you out of love. I’m warning you like I warned the Nationalists. I am warning you. One day, we will start praying for the defeat of the ANC Government. You are disgraceful. I want to warn you. You are behaving in a way that is totally at variance with the things for which we stood,” Tutu said.

Beyers Naudé was another anti-apartheid cleric who spoke truth to power. From 1977 to 1984 he was “banned” by the government and numerous restrictions were put on him. He was not allowed to be in a room with more than one person, for example. Despite this Naudé managed to set up anti-apartheid resistance in and out of South Africa, even to the point of working with the internal ANC underground. After his unbanning in 1985 he succeeded Desmond Tutu as secretary general of the SACC. In 1987, the apartheid regime outlawed public pleas for the release of political detainees but Naudé pressed Christians to continue to pray for detainees despite government threats of imprisonment.

Church leaders have a long history of speaking truth to power and attempting to call them to accountability. The separation between religion and state does not mean that religion has nothing to say to the state. It is a good separation that empowers religious leaders, using the rich history of the Judea-Christian prophetic tradition, to hold people in civil authority accountable. A simple perusal of the Prophetic Books of the Hebrew Bible – let alone at the confrontational attitude of a certain Jesus of Nazareth to Roman authorities and the collaborationist religious establishment in first century Palestine – should convince even the most theologically illiterate.

It is rather ironic that the President tries to sanction religious leaders and restrict them to spiritual things when he has, several times, used churches as public platforms to address people. He seems ready at the drop of a hat to get publicly blessed by any willing pastor, particularly when it may serve his career. Although he claims to be a pastor, he has not used the pulpit for the spiritual things he believes religious leaders should be talking about. Zuma has himself taken to the pulpit to play politics. He has used the pulpit to manipulate those in the benches because he knows that the religious community has access to people on the ground. He knows that church communities are still very important in the lives of millions of South Africans.

The President also should remember that the people who fill churches on Sundays come from and are involved in civil society. Churches are part of civil society, they share the concerns of their members, many of whom are distraught at the current state of the country. It is, therefore, no surprise that religious leaders will get involved in the plight of the people they serve. Many religious leaders, despite the ANC’s protestations, will know the plight of people much better than those in government. Religious leaders live among and share marginalised people’s daily struggle. They do not make guest appearances in blue-light convoys pretending that they are in solidarity with them.

Bishop Mpumlwana also writes, “We should remind people that the preamble to our national Constitution ends by saying ‘May God protect our people’. This is indeed the constitutional imperative for the church to rise to protect the people of South Africa in the name of God…”

While the President may choose to flout the country’s Constitution, it is good that the religious leaders have chosen to uphold it. It is not a choice but, rather, an obligation to stand up and speak truth to power. It is the business of religious leaders to call those in power to account, like it or not, Mr President. DM