Vote of No Confidence: Pressure mounts as clock ticks down to Mbete’s decision 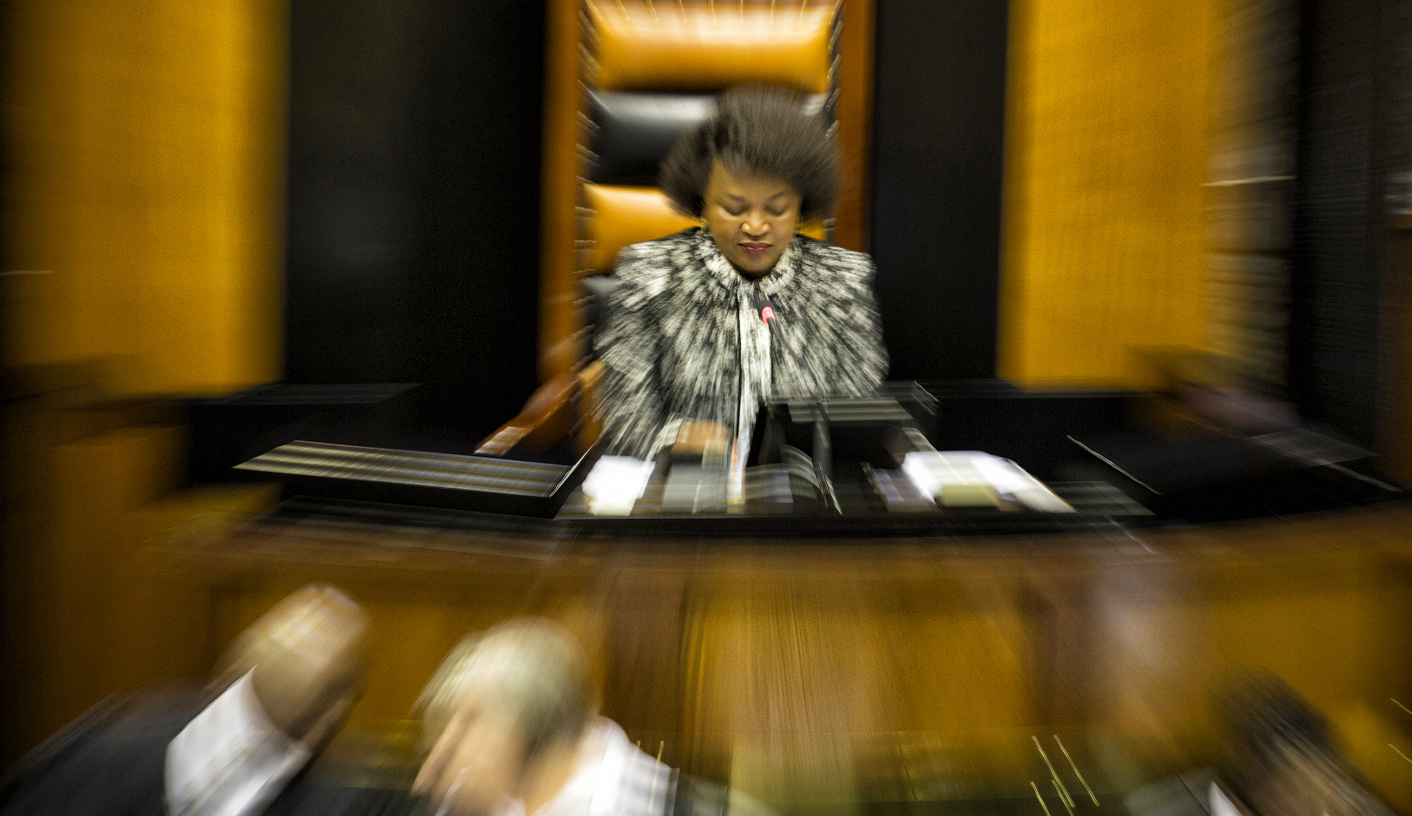 Outspoken ANC MP Makhosi Khoza on Sunday said “nothing has changed” regarding a vote of conscience in Tuesday’s no confidence motion in President Jacob Zuma, but party colleague Mondli Gungubele declined to comment. The pressure on those favouring conscience above the party line, including ANC MPs like Derek Hanekom, Pravin Gordhan and others, has skyrocketed as the governing party is cracking the whip amid rhetoric likening the motion to regime change. All this comes as National Assembly Speaker Baleka Mbete, who is also ANC national chairperson, is expected to make her decision on a secret or open ballot on Monday. By MARIANNE MERTEN.

How or even whether the motion of no confidence goes ahead on Tuesday afternoon as scheduled will depend on Speaker Baleka Mbete. If she decides on a secret ballot, it’s all set to unfold from 14:00; the ANC in its submission on this matter last month indicated it would abide by whatever decision the Speaker makes. If Mbete decides on an open ballot, her reasons will be scrutinised by opposition parties with a view to court action. If court action ensues, it could well mean a postponement of the no confidence motion pending the finalisation of the court action.

The EFF on Sunday said its formal court documents and lawyers are ready, while the DA indicated it has consulted its lawyers on the various possible scenarios. The United Democratic Movement (UDM), which initiated the secret ballot case in the Constitutional Court earlier this year, is holding its horses, for now, until the Speaker’s reasons are clear.

The Constitutional Court on 22 June ruled it was Mbete’s decision to make on whether the constitutional motion of no confidence in Zuma is decided on a secret or open ballot, but that the reasons for her decision must be rational. And that test of rationality is what may return the matter to the courts and, depending on the decisions there, lead to a postponement of the motion of no confidence debate and vote.

Mbete’s decision is expected on Monday – that’s the day the ANC top six officials, including Mbete, meet at Luthuli House in central Johannesburg – according to the Sunday Times, which quoted her as saying she was still applying her mind: “You don’t wish to be me. It’s a difficult place to be.”

On Sunday evening Parliament announced Mbete would brief on the voting procedure on Monday afternoon.

Last month Parliament issued a statement saying the Speaker was still applying her mind and pointed out that the Constitutional Court had not set a deadline by which she had to make the announcement.

There is much up in the air.

This has raised the stakes for the opposition parties in Parliament to maintain the buy-in of the 60 ANC MPs, they say, have pledged to support the motion, at least on a secret ballot. The combined opposition holds 151 seats against the ANC’s 249, but needs between 60 to 70 ANC MPs’ support for a comfortable margin. That’s because not all opposition MPs will support the motion: the Pan-Africanist Congress (PAC), which has one MP, publicly has said it would not, and questions hang over the three African Independent Congress (AIC), which is in coalition with the ANC at local government, and the African People’s Convention (APC) MP.

There could also be absences due to ill health, one of the few accepted excuses when political parties call a three-line whip – parliamentary jargon for party instructions on how to vote. This would also apply to the ANC, which is expected to pack its parliamentary benches, although it emerged on Friday that a couple of its MPs would be absent due to international travel commitments that could not be changed.

There is also much at stake for the ANC. Without a word on whether the vote would be secret or open, those ANC MPs in favour of a vote of conscience are finding it difficult to persuade others. While Khoza has continued to speak out publicly despite the disciplinary charges brought against her, Gungubele is choosing silence since a public statement by the ANC Chief Whip that his comments constituted the “worst form of ill-discipline” after Gungubele was quoted by News24: “Against the facts at my disposal, I say it again, I don’t have confidence in the president. If the 8th [of August] finds me in this position I will vote consistently with my attitude.”

A secret ballot would make it easier for ANC MPs to step out of the party line to follow their conscience and support the motion of no confidence in the president. An open ballot, in which MPs’ decisions are recorded under their names, would make it more difficult to stand up and out.

The just over 40 South African Communist Party (SACP) members, who are ANC MPs, face a conundrum: the SACP has called on Zuma to step down, but as MPs they are bound by ANC party discipline. The SACP is leaving it to the 11th hour to resolve how its members should vote.

The ANC leadership has in recent days upped the ante – it always has been a case of the ANC could never support the opposition, and those who did would have the book thrown at them – to effectively invoke regime change rhetoric by equating a vote of no confidence in Zuma to collapsing a democratically elected government in which the ANC holds 62% of the votes cast in the 2014 elections.

Or, as ANC Chief Whip Jackson Mthembu put it on Friday: “We must never allow our current irritations to blind us to act in a manner that destroys everything that we have built over the past 23 years as a young democracy. Voting in favour of this motion will be tantamount to throwing a nuclear bomb at our country. The removal of the president will have disastrous consequences that can only have a negative impact on the people of South Africa.”

This argument has been rejected by opposition parties.

IFP Chief Whip Narend Singh said in favour of a successful motion of no confidence in Zuma: “It’s a nuclear bomb that will cleanse.”

EFF Secretary-General Godrich Gardee on Sunday said arguing a vote of conscience was undemocratic was “hypocritical” by the ANC. “If the Constitution provides there can be a motion of no confidence, then it means whatever flows out of the Constitution is democratic,” he added.

DA national spokesperson Phumzile van Damme described the ANC’s argument as “just really cheap spin”. Acknowledging that the ANC had closed ranks around its president, she added: “They all know it will be great for South Africa and the ANC if Zuma goes. They have the potential for self-correction and putting SA first.”

UDM leader Bantu Holomisa said the no confidence motion was not a campaign by the opposition against the ANC, but a matter that reverberates around the country. “This one is transparent, is giving the ANC an opportunity to explain to the nation why it is insisting to retain this individual (Zuma)… this individual responsible for the looting of the state resources by a family he says he is friends with…”

In some ANC circles there is acknowledgment of the damage of the #GuptaLeaks revelations and the validity of concerns raised by various reports on the state of current troubles, be it the SACC’s Unburdening Panel, the academic research collective on state capacity’s Betrayal of the promise: How South Africa is being stolen or Outa’s No room to hide.

But the ANC response to all this is to close ranks behind Zuma now and play kick for touch to the December national elective conference. That’s in an effort to avoid a sympathy vote with the Zuma camp, according to the Sunday Times and City Press. “So, we are not ready. It is a crisis. That is why we have to defend the president up until we are ready because now we are not ready. We are divided… We will not agree on any candidate (for ANC president). So we are not going to allow our public representatives to vote according to their conscience,” one ANC National Executive Committee (NEC) member quoted in the Sunday Times says.

And perhaps in this lies the answer as to why for years in the midst of the Nkandla debacle and against the increasingly louder objections from civil society the governing party has appeared paralysed. But the road to the ANC December national elective conference is still long – and full of potential surprise turns. DM