The Guptas’ racism and their manipulation of race in South Africa 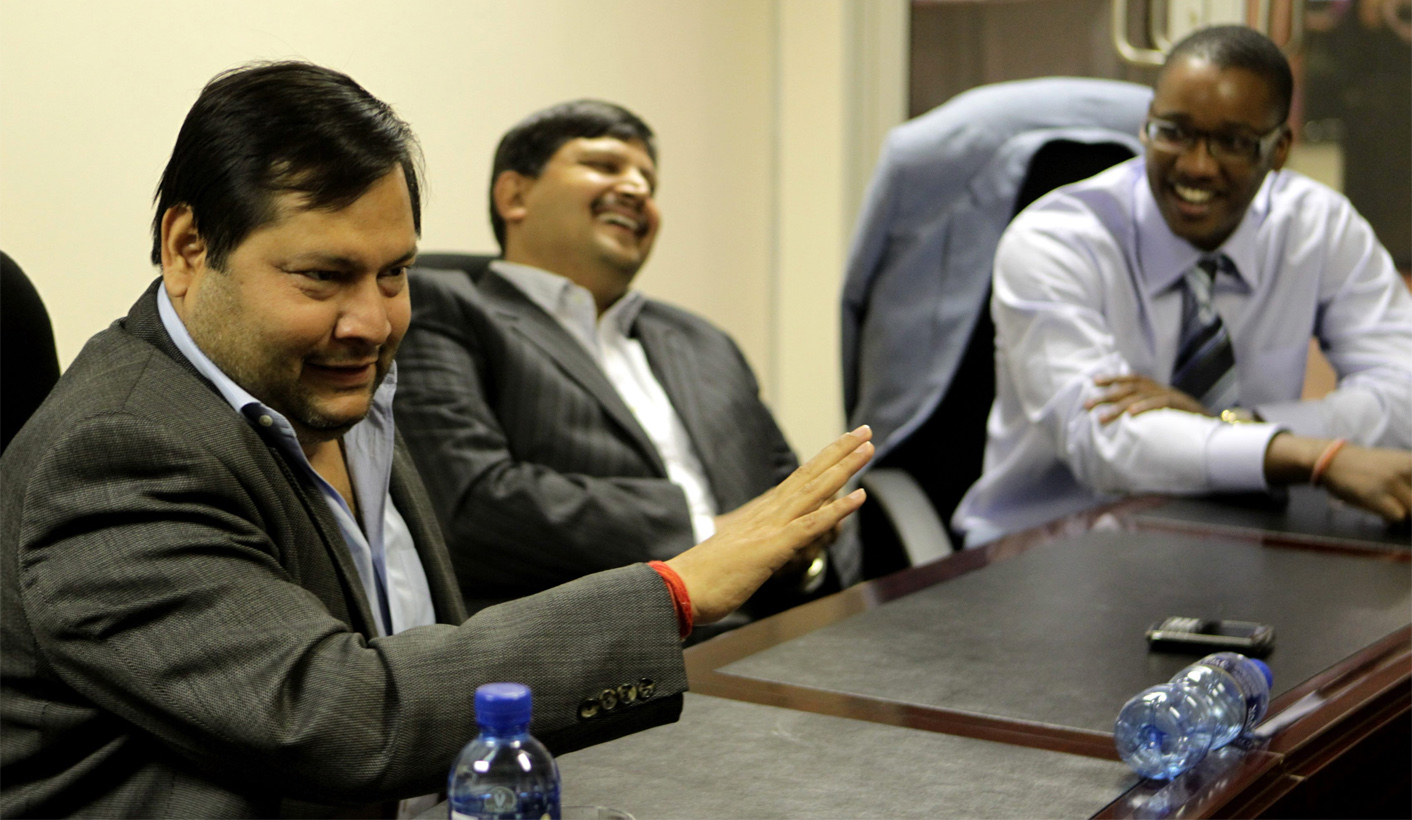 There are many things that are offensive about the conduct of the Gupta family. Their sense of entitlement to South Africa’s resources and disdain for the country’s people are perhaps most infuriating. The deluge of information being released into the public domain about their dodgy business practices and manipulation of political leaders and government officials might create a sense of powerlessness among ordinary citizens. But there should never be hopeless acceptance of the Guptas’ corrupt and immoral practices. Neither should South Africans turn a blind eye towards their racism and exploitation of race dynamics in the country. By RANJENI MUNUSAMY.

The Gupta wedding jamboree at Sun City in May 2013 was when South Africa first got to see the family’s opulence and audacity on full display. There was public outrage over the family’s use of the Waterkloof Air Base to land a jet carrying guests from India to attend the wedding of Vega Gupta and Aakash Jahajgarhia. It was also when we got to know that “Number One” was the Guptas’ “Open Sesame” to the South African state, its facilities and resources. Not only was the gaggle of guests ushered in through special immigration arrangements at the military airport but they were also transported to the Sun City resort in an illegal blue light convoy.

The one disturbing part of this wedding wingding that seems to have been forgotten over time is the alleged racism from the family. Workers at Sun City reported that Gupta security personnel ordered black waiters to wash themselves before they could serve the wedding guests.

“This blatantly means that black people smell and the Gupta guests would not be served by smelly black people,” a resort employee was quoted as saying by City Press. The paper said bodyguards and butlers hired for the wedding were white.

Cosatu’s Solly Phetoe also said at the time that only white drivers, white massage therapists and white staff were allowed to deal with the guests. “They wanted white people to clean their rooms and even only white people to drive their cars,” he said.

Beeld reported that white women who had not worked at spas in Sun City for over five years had been asked to return for a week. “It is very strange to me. They haven’t worked here for some time but now they’ve been asked to come back,” one woman was quoted.

The family denied all the allegations of racism. Because of who they are and who they own, the matter was never followed up. The conclusion, therefore, must be that all the black people who witnessed the racism were lying – just like everybody who has experienced their corruption is accused of being dishonest.

Among the thousands of Gupta emails that have come to light is correspondence indicating that one of the Gupta brothers, Rajesh “Tony” Gupta, had called security guards working at their Saxonwold compound “monkeys”. The email trail shows that an employee at Sahara, the Guptas’ computer company, wrote to the former general manager of the security company G4S, Lenord Zaal, to complain about one of the guards.

Then in a letter addressed to Atul Gupta, a senior G4S security official stationed at the Gupta compound said there was a serious problem with one of the guards who wanted to drive rather than guard the main gates.

“Monday evening I was not on duty, but I understand that G4S did not hear Mr Tony, when Mr Tony called them repeatedly, to inform them that a guest would be arriving, the incident aggravated Mr Tony so much that he called them monkeys [sic],” the letter reads.

Despite this incident being reported in Times Media publications on Friday, there has been no public outcry about Tony Gupta’s bigotry. Perhaps South Africans have become so accustomed to the Guptas’ contempt for ordinary people that we have become tolerant of all their bad behaviour.

It is not only through these incidents that their prejudice is evident. The Guptas’ entire modus operandi is based on their exploitation of people they feel are inferior and easy to manipulate by throwing money at them. Unfortunately people like President Jacob Zuma, his son Duduzane, some Cabinet ministers and a host of officials in government and state-owned enterprises see no problem with selling their souls and their country to the Guptas. They seem not to care that thousands of people made tremendous sacrifices for South Africa to become a democratic and sovereign nation.

Equally sickening is how the Guptas and Duduzane Zuma used their hired UK PR firm Bell Pottinger to structure a campaign to manipulate the national discourse around white monopoly capital and radical economic transformation. They did so to use the apartheid legacy, systemic racism and the slow pace of transformation as cover for their looting spree and to attack their opponents.

Daily Maverick reported this week on email exchanges between Duduzane and Victoria Geoghegan, Bell Pottinger’s financial and corporate partner, on a broad-based campaign to influence perceptions about South Africa’s economy.

Although Bell Pottinger was hired ostensibly to help the Guptas navigate the negative publicity against them, the contents of the leaked email tranche reveal that the assignment evolved into a massive campaign to distort and manipulate the national conversation in the country.

The correspondence between Geoghegan and Duduzane in January last year outlined a comprehensive PR strategy on the economy. This included assistance in setting up of a vehicle to be the public face of their narrative and packaging this narrative “into speeches, press releases, website content, videos/broadcast content, slogans and any other material”.

“It is critical that the narrative grabs the attention of the grassroots population who must identify with it, connect with it, and feel united by it,” Geoghegan told Duduzane. So the “grassroots”, meaning poor, black people, needed to be lured by the messaging and manipulated into supporting it.

Duduzane responded to her mail approvingly and asked for assistance on a spin-off campaign:

“It will include dispersing critical information, which I have researched and will share, in a short period of time. It will also require a visual campaign of sorts T-shirts/banners etc. Where I will require assistance whether it be in the designing and creating a hard hitting message along the lines of the #EconomicEmancipation or whatever it is.”

What ensued over the next year was a sophisticated campaign to drive mass media coverage and social media conversations around radical economic transformation and against the white monopoly capital bogeyman. The campaign also targeted those standing in the way of the Guptas such as former finance minister Pravin Gordhan and former deputy finance minister Mcebisi Jonas. A social media black ops operation saw hundreds of fake accounts being set up to troll and demonise opponents of the Guptas and journalists – all on the basis that they were supposedly paid by white monopoly capital to oppose economic transformation.

The evil genius in the strategy was paying prominent advocates for transformation and economic change to act as arch defenders of the Zuma-Gupta network. Mzwanele Manyi and his Decolonisation Foundation and Andile Mngxitama through his Black First Land First organisation have been useful finger puppets to distract attention from the plunder of the state. They are fortunate not to have any sense of self-respect and continue to be used to keep the campaign rolling long after the agenda was exposed. The irony of the Guptas using them on the basis of their race to accuse others of racism while covering up the family’s illicit activities seems not to have occurred to Manyi and Mngxitama.

The Guptas appear to think that all black South Africans have a price and can be manipulated as easily as the Zumas, Free State Premier Ace Magashule and his sons, the members of Cabinet they pay to do their bidding, the hapless Brian Molefe and the bumbling ANC Youth League president Collen Maine, who enthusiastically mouths off what they tell him to.

Those who resist or expose the Guptas’ advances are projected as liars or sell-outs to white monopoly capital. Black people can apparently only be on their payroll or someone else’s.

The entire campaign was structured on the basis that the people of this country, particularly black South Africans, would be too stupid to see through the spin exercise and would fall for the ruse. The ANC has watched their political agenda and conference resolutions being appropriated, distorted and abused without being able to fight back. The party is so confused by the Gupta-Bell Pottinger operation that it still cannot tell whether it supports or opposes it.

South Africans have tolerated the Guptas’ corruption and racism for far too long. Their contempt for this country’s people is obvious in the way they have ransacked the state and shifted their wealth offshore. This country is tormented by the legacy of colonialism and apartheid, both of which were perpetrated by those who saw themselves as superior to others and entitled to pillage the resources of this land.

The Guptas are not entitled to a third wave of racist exploitation. DM