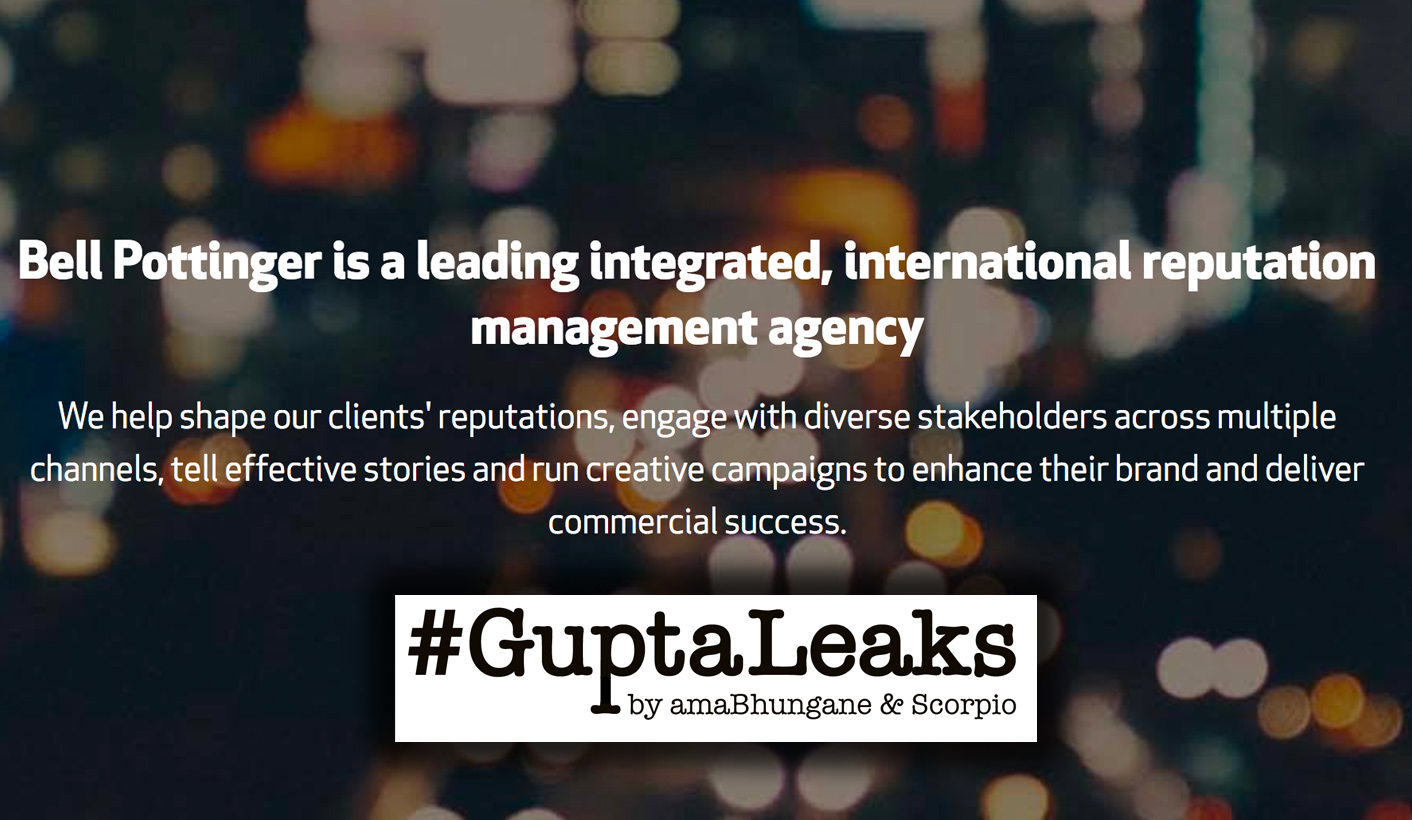 In January last year Victoria Geoghegan, British-based PR firm Bell Pottinger’s Financial and Corporate partner, met with President Jacob Zuma’s son Duduzane to strategise a campaign aimed at marketing a “narrative that grabs the attention of the grassroots population who must identify with it, connect with it and feel united by it”. In so doing, the firm directly undermined the ANC’s capacity to communicate its own policies and programmes to South Africans and hijacked the ruling party’s message, seemingly to benefit the image of the Gupta family. By SCORPIO and AMABHUNGANE.

Victoria Geoghegan later invoiced the Marketing Quotient, a Dubai-based company part-owned by Gupta family lieutenant, Salim Essa, a “project fee” of £100,000 (About R2.3-million according to exchange rates in January 2016) for a consultation with Duduzane Zuma.

The two met to discuss a brief for a five-month campaign which Duduzane later described in a reply to Geoghegan as “not primarily one to affect the outcome of the elections [2017] but to turn the tide of our country’s trajectory in the long term”.

Earlier Geoghegan wrote to Duduzane that Bell Pottinger was keen to build a long-term partnership with Zuma and that “we want to stand shoulder-to-shoulder in communicating such a vital message for South Africa. The future of the country in terms of fair economic growth, an inclusive society and political stability, depends on it.”

Attached to the mail to Duduzane is a document titled “Reflections on meeting and next steps” in which Geoghegan sets out how she has had time to “reflect on our conversations and now have a deeper appreciation of the focus of the project and the potential for a long-term partnership between us”.

“1994 was a seminal year in South Africa’s history. The peaceful handover of power raised the hopes of many, and the expectation of imminent political AND economic enfranchisement was justified. The reality is that whilst political freedom has been attained there is a feeling that expectations of economic empowerment have not been met, with the wealth of South Africa sitting within a small grouping.

“With unemployment levels in excess of 20%, with the ANC approaching the 2017 elections following unbroken rule since 1994, with the political opposition (DA & EFF) upbeat there is a feeling that the next big key issue facing South Africa is that of delivering genuine economic empowerment. This feeling is widespread and has been expressed to us in emotive language using phrases such as ‘economic apartheid’ and ‘economic emancipation’.

“Furthermore, given that a lot of current criticism (for almost all of South Africa’s ills) is directed at President Zuma, and indirectly at the ANC, there is a need to explain in clear, unambiguous language that it is vital ‘economic emancipation’ is addressed. The people of South Africa need to be told that their dissatisfaction is being heard and that concrete actions are being, or will be taken to address them.

“In addressing this issue, the language and psychology used will be crucial. If world markets become spooked by fears of a Mugabe-style programme of asset seizure, then it is all South Africans who will suffer. However, if the message is one of a process that generates wider economic inclusion, using contemporary business models, then ALL South Africans will benefit equally.

“Equally, the message we wish to disseminate is not one that can be sold overnight. For this campaign to be believed and to achieve credibility there will need to be discipline, continuity and consistency over a period, ideally running up to the 2017 elections and beyond. The key to any political messaging is repetition and we will need to use every media channel that we can, to let our message take seed and to grow.

“Below is a set of recommendations based upon an initial project, with the opportunity for further projects to evolve. These tactics are not exhaustive and would be developed into a full and comprehensive strategy.

“We will draw our team from across the Bell Pottinger Group. The day-to-day account management will be overseen by Victoria Geoghegan, Jonathan Lehrle, Nick Lambert, Darren Murphy (Tony Blair’s political adviser), and supported by a much wider team. Lord Bell will be available for strategic counsel as and when required. We will also have in reserve other divisions (digital, crisis communications) should we need a wider skillset.

“Bell Pottinger is keen to build a long-term partnership with you. Given our deeper understanding of the assets you have at your disposal, we envisage an initial five-month project (February 2016 to June 2016 inclusive), at a fee of £100,000 per month, excluding costs.

“Any costs would be communicated to the South African team in advance, and would not be incurred without your prior approval. Principal costs would chiefly involve travel and accommodation and we envisage a team from Bell Pottinger visiting South Africa each month.

“We hope that this demonstrates our commitment to stand shoulder-to-shoulder with the South African team in communicating such a vital message for South Africa. The future of the country in terms of fair economic growth, an inclusive society and political stability, depends on it.”

On January 20, 2016 Duduzane responded to Geoghegan thanking her for her time and for making the trip to South Africa “on such short notice which created an immediate impression of the degree of seriousness from your side and I appreciate that. You come highly recommended and you represent a powerful brand, I do not take that for granted.”

He writes that he has gone through Geoghegan’s document and, “I am quite happy and enthused by your understanding of what needs to be done and the time frames in which we need to do it in. I have to reiterate that, which you correctly put it, this ‘journey’ is not primarily one to affect the outcome of the elections but to turn the tide of our country’s trajectory in the long term.”

He ends with two requests, one that she forward the invoice to him and also asking for advice on another campaign he appears to be working on.

“It will include dispersing critical information, which I have researched and will share, in a short period of time. It will also require a visual campaign of sorts T-shirts/banners etc. Where I will require assistance whether it be in the designing and creating a hard hitting message along the lines of the #EconomicEmancipation or whatever it is.” DM