#GuptaLeaks: What does email trove mean for Zuma and South Africa? 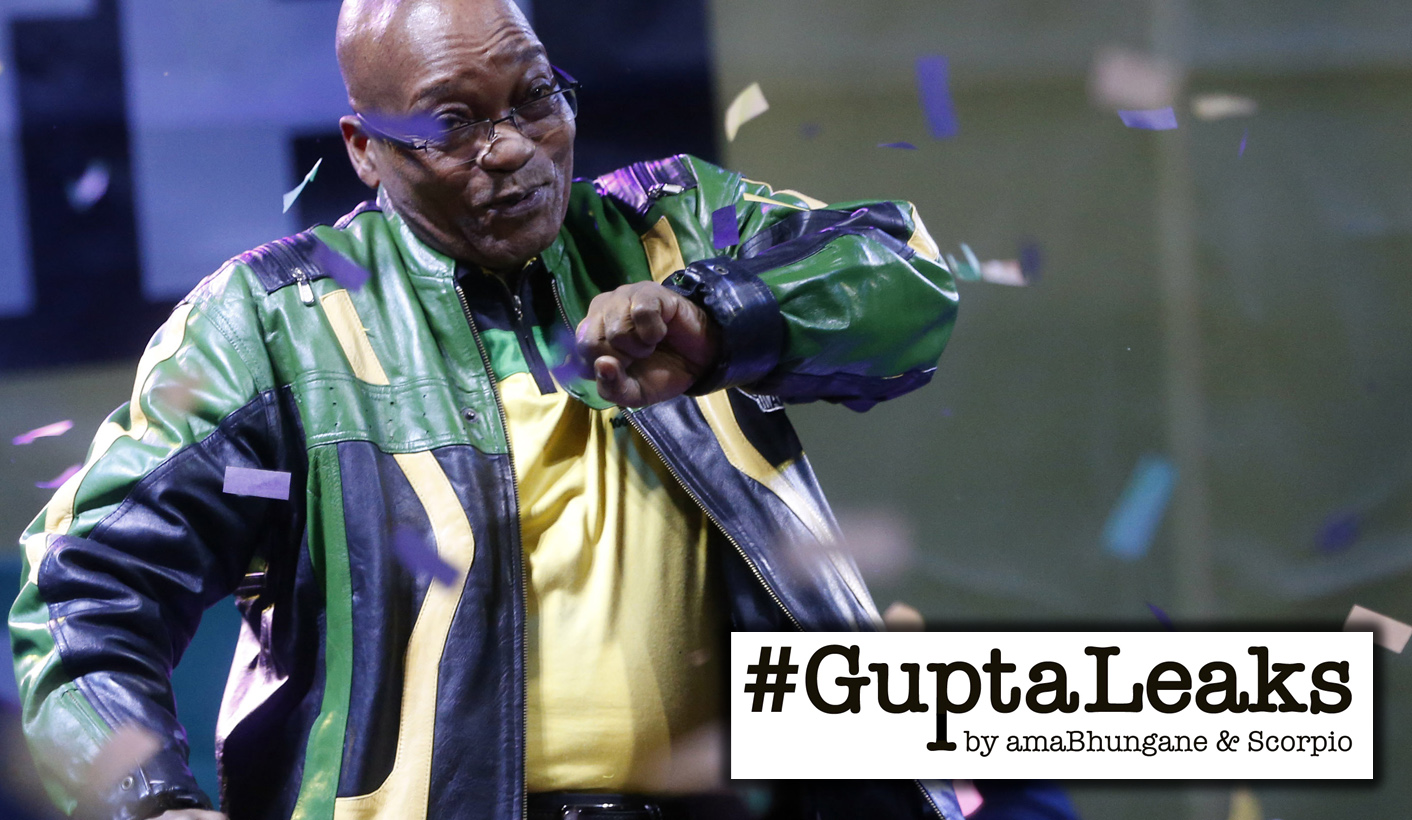 Photo: President Jacob Zuma dances at a victory rally of his ruling African National Congress (ANC) in Johannesburg May 10

Plausible deniability. President Jacob Zuma’s greatest self-defence strategy is the ability to manoeuvre to ensure that nothing can be directly pinned on him. From his corruption case to the Nkandla upgrades to the ANC’s losses at the polls to the activities of the Gupta family, the president’s excuse is either that these things happened without his knowledge or have nothing to do with him. That is the big problem with all the revelations so far from the massive tranche of leaked emails implicating the Gupta family in state capture. Is there a smoking gun that directly connects Zuma to the Guptas’ illicit activities? And what are we supposed to do with all this information? By RANJENI MUNUSAMY.

Ever since the private plane full of wedding guests landed at Waterkloof Air Force Base in April 2013, South Africans have known that the Guptas are a bunch of rotters who have free run of the state. Between then and now, there has been a constant stream of revelations about the extent of the Guptas’ infiltration of the government system, how they have bought political influence and taken over control from the ANC.

Before the leak of the Gupta emails, the evidence in the public domain was already damning and sufficient to pursue prosecutions. Mcebisi Jonas, then a deputy minister in government, confirmed publicly that he had been offered a R600 million incentive to take the job of finance minister. The circumstances around the purchase of the Optimum coal mine had corruption written all over it. The closure of the Guptas’ bank accounts after their transactions had been red flagged by the Financial Intelligence Centre necessitated an investigation into money laundering.

The Guptas have until now escaped investigation from the state agencies because they have purchased indemnity. You have to hand it to the Guptas; the way they went about capturing the state is quite impressive. Not only did they buy the president and his son, they targeted key people in government that could act as their minions. When people were resistant to their agenda, they scouted for bootlickers and had them appointed. They paid off people in the security agencies to make sure they would not be bothered with criminal investigations.

The Guptas also knew how to service and keep their gallery of dancing marionettes happy. Their compound in Saxonwold is like Vegas. Apart from Jonas, former government spokesman Themba Maseko and former ANC MP Vytjie Mentor, whatever happened in Saxonwold stayed in Saxonwold.

The parade of politicians and officials in government and state owned enterprises keep the secrets of whatever is discussed and plotted behind those high walls. In the case of minion without portfolio, Brian Molefe, he would rather conjure up a Saxonwold shebeen than disclose his comings and goings to the Gupta compound.

An essential part of the state capture process was the Guptas’ communications operation. Through The New Age and ANN7, the Guptas ran their own propaganda machinery. Through a partnership with the SABC, they not only set up a scheme to channel large payments from state owned enterprises, they were also able to show off their political connections including the president, Cabinet ministers and provincial premiers. Then through the Bell Pottinger spin operation, they paid a range of useful idiots to direct the national discourse, manipulate social media conversations and attempt to demonise journalists.

The Guptas were thorough and tactical. They invested a lot of money in setting up their patronage network of people who would do exactly what they wanted. For a long time, their investment paid massive dividends.

Ordinary people have an odd fascination with audacious crimes. This is why people are still in awe of the Great Train Robbery in 1963 when £2.6 million was stolen from a Royal Mail train. The remake of the comedy heist film Ocean’s Eleven raked in over $450 million at the box office because the storyline of the most sophisticated, elaborate casino heist in history continues to enthral people. In South Africa the brazen 1996 R31 million SBV robbery was talked about for years afterwards and also became a movie.

The Public Protector’s State of Capture report, the South African Council of Churches Unburdening Panel and the State Capacity Research Project by academics from four universities all show how the Guptas went about gaining access to the state and manipulating people and processes to amass wealth. Through their “silent coup”, they progressively sucked away power and influence from the ANC.

The information released from the email trove so far shows minute details of the Guptas behind-the-scenes operations. From their manipulation of contracts to the movement of money to a glimpse into their opulent lifestyles, the emails crank open their world a little wider so that the rest of the world can gawk.

It is almost like a real life Ocean’s Eleven with South Africa as the casino being robbed – the Gupta brothers are ugly versions of George Clooney, Brad Pitt and Matt Damon.

The emails reflect that central role of the president’s son, Duduzane, in knitting together the patronage network in exchange for the Guptas sponsoring his flamboyant lifestyle. Raunchy attachments to his emails also reveal that he is a philanderer with a taste for the highlife but that simply adds lewd unnecessary details to an already messy story.

What ought to be the focus are the people involved, how the Guptas’ representatives pulled people’s strings and greased their palms, how money was moved, how money was stolen from the state and who aided and abetted them.

Revelations in the emails of how Gupta employees coached and wrote scripts for ANC officials, including the ANC Youth League president shows that the political discourse in the country is fake and driven by an agenda. It is now clear the radical economic transformation narrative was fabricated to distract change the conversation away from the corrupt activities of the patronage network.

But the email leak has yet to produce the smoking gun that links Zuma directly to the Guptas activities. All that has been revealed has so far been circumstantial and there is no firm evidence that Zuma intends relocating to Dubai. While Duduzane’s fingerprints are all over the state capture crime scene, there is nothing to indicate that Zuma was aware or involved in his son’s activities.

In this case, the sins of the son cannot be visited upon the father. But that does not mean there is no case to answer. If Zuma were still accountable to the ANC, he would have had to answer how he came to appoint people in his Cabinet that the Guptas scouted. A proper criminal investigation would ask the same questions of Zuma.

Judge Hilary Squires pointed to a “mutually beneficial symbiosis” between Zuma and his former financial advisor Schabir Shaik who was convicted of corruption. While Zuma might have plausible deniability with regard to the emails, there is enough evidence in the public domain for him to answer some hard questions in a credible corruption investigation.

The avalanche of information released from the email tranche could cause a more severe case of scandal fatigue amongst the South African public. There is too much to process and the information simply confirms the extent to which the Guptas infested the state in order to drain resources through numerous channels.

A judicial commission of inquiry might be the only way to process and test all the information credibly. But because Zuma is charged with appointing it, a conflict of interest is bound to arise both regarding which judge he appoints to head it and the terms of reference. Zuma’s application for a review of the Public Protector’s report that recommended that the Chief Justice name the judge means that the matter will be dragged out for some time before the inquiry can be appointed.

The reliance on the judicial commission of inquiry however lets the police and the National Prosecuting Authority (NPA) off the hook in pursuing the matter. The fact that the Hawks and the NPA are not under public pressure to investigate and effect prosecutions means that people accept that these institutions are lost cause and under the thumb of Zuma and the Guptas.

The emails provide prima facie evidence of corruption, fraud, money laundering and racketeering. These cannot be investigated and prosecuted by a judicial commission. The full extent of the Guptas’ activities have yet to be revealed, and possibly might be as reports on the emails reel out. What is needed is an extensive criminal investigation against the Guptas, Duduzane Zuma and others in their network.

Smoking gun or not, whoever is implicated must be investigated. And if there is plausible deniability, let’s hear it. In a court of law. DM

Photo: President Jacob Zuma dances at a victory rally of his ruling African National Congress (ANC) in Johannesburg May 10, 2014. The ANC won the 2014 national election with 62.16 percent of the votes, according to a provisional tally of Thursday’s balloting. REUTERS/Mike Hutchings