Op-Ed: Lesotho elections – maturing democracy or a failure of institutions? 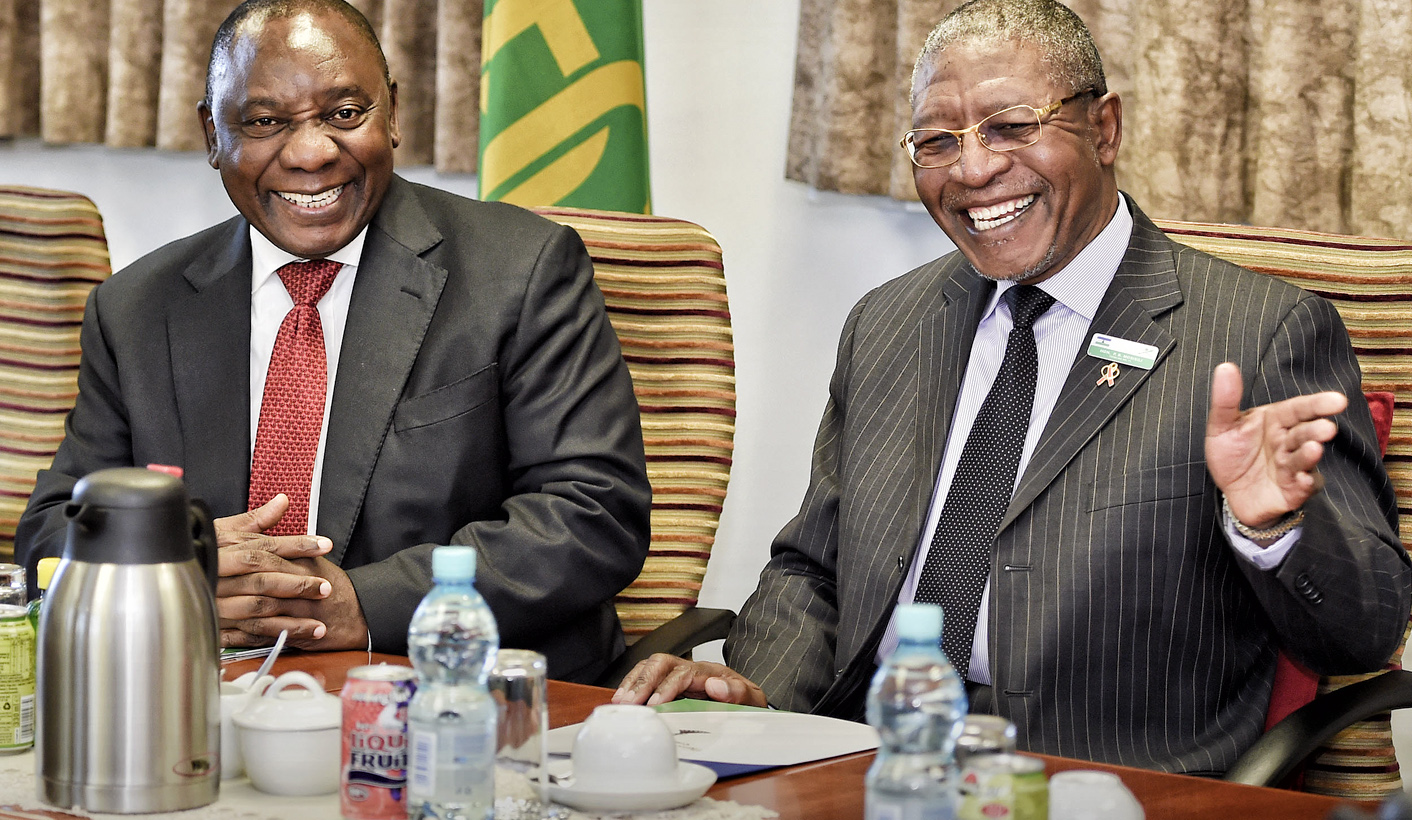 When Tom Thabane and the All Basotho Convention (ABC) took power after the 2012 elections, it marked the first peaceful transfer of power in Lesotho’s relatively brief history. It also marked the country’s first instance of coalition government. Many southern African political commentators, including this author, found reason for optimism in 2012 with the dawning of the coalition era in Lesotho’s politics, but was this optimism misplaced? By JOHN AERNI-FLESSNER.

June 3, 2017 will mark the third time in five years that Lesotho has held a general election. The election comes on the heels of Democratic Congress (DC) Prime Minister Pakalitha Mosisili losing a no-confidence motion in March in Parliament. His unwieldy seven-party coalition degenerated into infighting less than two years after taking office. This is the second coalition failure in three years. In 2014, All-Basotho Convention (ABC) Prime Minister Tom Thabane’s five-party coalition crumbled only two years after taking office.

The rapid disintegration of two successive coalition governments and continued political violence at the highest levels of politics and security have tarnished the hope seen at the time. With coalitions seeming unstable in Lesotho, is there any hope that the continuation of the “coalition era” after the 2017 elections will lead to good governance for ordinary Basotho? Or do we have to reasonably conclude that coalitions are another failed experiment in the 50-year search for stable, representative government in Lesotho?

History suggests that any new coalition will be inherently unstable, but that as of yet, all hope is not lost for governmental stability in Lesotho. Time is surely ticking, however, on how long the current system can survive if a third consecutive coalition fails to finish a five-year term.

The nature of the electoral system ensures that another coalition will come to power in June, but the number of parties and the ambitions of the top leaders will, as always, determine the shape the new government takes. PM Mosisili’s government fell after one of his top deputies – Minister Monyane Moleleki – split from the ruling DC, formed a new party, the Alliance of Democrats (AD), and allied with Thabane’s opposition ABC. These former rivals agreed to a novel prime minister-sharing agreement if this alliance comes out on top in the polls. The agreement would make Moleleki, the junior partner, the prime minister for the first 18 months, with Thabane taking over after that. The price for Thabane seems steep, but it is a price he is evidently willing to pay to return to power, especially at the expense of his chief rival, Mosisili.

The prime minister is not going away without a fight, however. Mosisili’s DC recently announced a “vote sharing” deal with his primary coalition partner Mothetjoa Metsing and the Lesotho Congress for Democracy (LCD). They will combine forces in the hope of gaining both more wins in first-past-the-post constituencies, as well as concentrating votes to garner proportional representation members. This strategy is also being employed by the opposition alliance.

All of these pre-election machinations raise the question of what it means to have separate parties if the level of co-ordination and co-operation is this close. Similarly, and more important, what benefit will ordinary Basotho see from all this political manoeuvring? The recent experiences of coalition governments suggest these are simply strategies for gaining and maintaining power, rather than tactics that will lead to better governance from a future government. All parties are accruing political debts to smaller partners that will probably need to be repaid with ministerial positions and other expansions of top governmental posts.

The less cynical read of pre-election manoeuvring is that at least these political innovations are coming from Basotho. There has been deep distrust from all sides of outside commissions and South African/SADC mediation over the years. The current opposition is opposed to the mediation of South African Deputy President Cyril Ramaphosa because they see him as being too close to former Deputy Prime Minister Metsing to act as a neutral broker. Similarly, the government alliance saw the SADC-sponsored Phumaphi Commission as being biased against them. The commission investigated the 2015 assassination of former LDF head Maaparankoe Mahao, and other assorted political violence that occurred in the wake of the August 2014 coup/not-a-coup in Maseru. Resistance to these efforts has seemingly poisoned the chance for outsiders to broker political deals leading to systemic change. Basotho-led initiatives probably have the best chance to succeed.

The more cynical read is that the long history of political contestation after elections, squabbling over positions within government, and lack of government stability are features of the political system that will not change with such paper-thin “reforms.” Under this scenario, the 2017 elections might just mark the last gasp of the Mixed-Member Proportional (MMP) system in Lesotho.

From the perspective of the Basotho public, national legislators are highly unpopular. While party rallies still attract large crowds at weekends ahead of the vote, most Basotho voters do not believe that politics at the national level will solve their everyday problems.

So where does Lesotho go from here? What can Basotho do?

First: Basotho can vote. Turnout for the 2015 elections slid below 50%, which gives Basotho politicians little incentive to broaden their appeal. Only the most partisan voters are coming out to the polls.

Second: Basotho involved in parties can insist that their leaders prepare for succession. None of the major political parties in Lesotho have ever voluntarily turned over leadership. Only illness/death and intra-party coups have managed to unseat party leadership in the independence era. Having no succession plan means that younger, ambitious leaders have more incentive to split and form their own party in the hope of gaining personal power. Ambition cannot wait in a system that rewards schism.

Third: Reform the MMP system so that parties have to gain a sizeable national standing in order to gain parliamentary representation. With the smallest party in the 2015-17 Parliament garnering fewer than 2,000 votes nationwide, there is little reason for a politician with any base of support not to form a new party. With the bar to get into Parliament so low, and given the stark political divides that mean even a few independent seats can make or break a coalition, the chance of ending up in a ministerial position is relatively high. Thus, a canny politician can turn a few thousand votes into a powerful position.

Fourth: Basotho need to continue demanding a revamping of the role the security forces play in public life, an issue that has long bedeviled the political stability of the Mountain Kingdom.

With the exception of the security reforms, a seemingly intractable problem at the moment, these are all steps that Basotho who are not parliamentarians can take. There are organisations within Lesotho, like the Transformation Resource Centre, the Lesotho Council of NGOs, and Development for Peace Education pushing for these goals. They need, however, a broad-based coalition of support, in particular from rural Basotho, to further an agenda of increased political transparency.

With public pride for Lesotho running deep, solutions to these problems will probably have to come from within. The 2017 elections can be a venue for Basotho weary of shortsighted political leadership to take the lead in demanding political reform. The alternative will probably be more of the same that they saw in the 2012-2017 period: short-term coalition governments worried more about internal political machinations than governance, and a constant supply of new political parties. DM

John Aerni-Flessner is an assistant professor of African History whose work focuses on 20th century Lesotho. He is based at the Residential College in the Arts and Humanities (RCAH) at Michigan State University (USA). His writing has appeared in academic journals including The Journal of African History as well as in newspapers and the collective blog Africasacountry.com. His book, tentatively entitled The Desire for Development: Foreign Assistance, Independence, and Dreams for the Nation in Lesotho, on the history of development and independence in Lesotho will be published in early 2018. He tweets on the Mountain Kingdom @LesothoJohn.