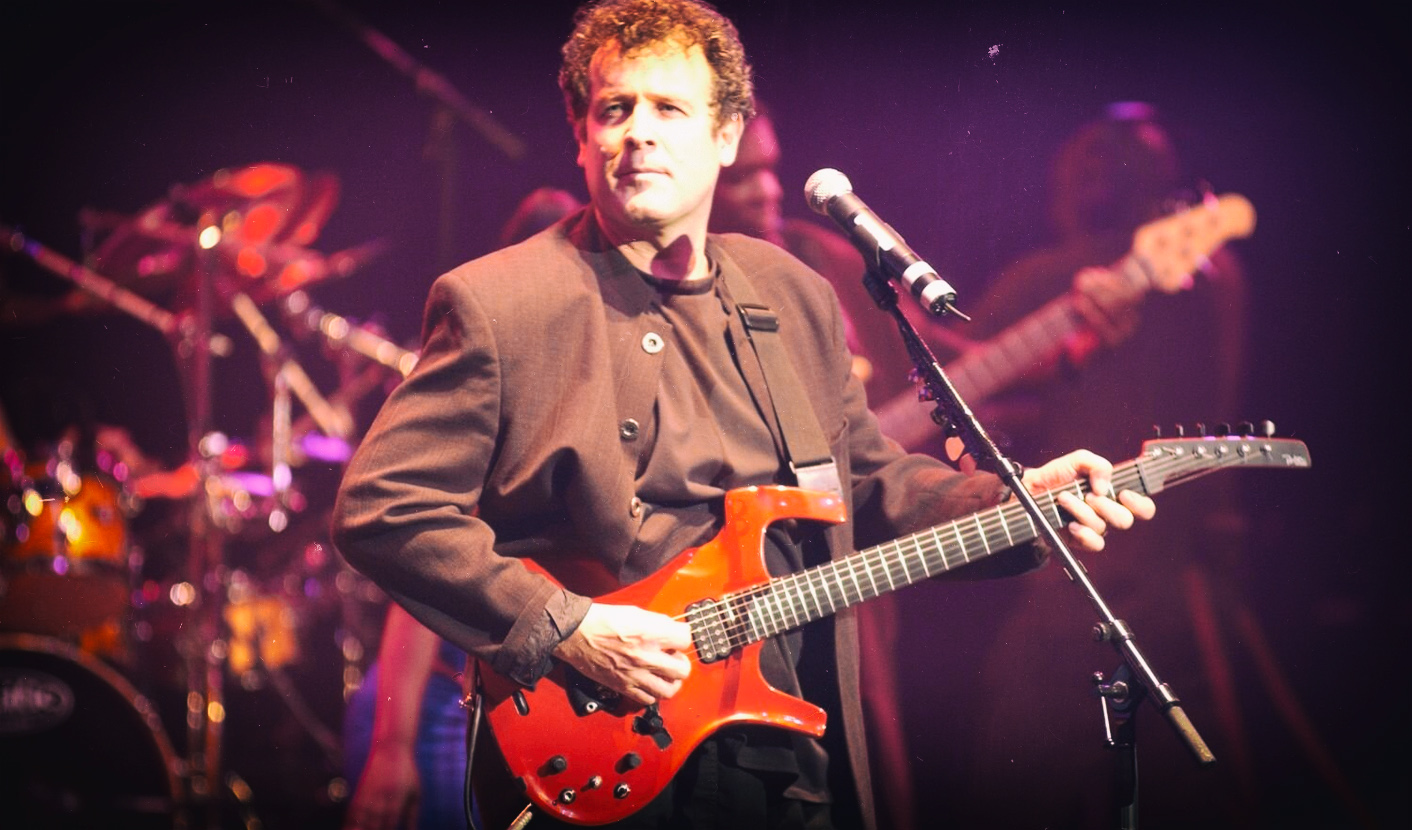 When a young white immigrant, Johnny Clegg, and a black migrant worker, Sipho Mchunu, first began collaborating musically in apartheid South Africa in the 1970s, the then government, desperate to keep black and white South Africans apart and culturally cauterised, regarded Clegg’s work as “an insult to the Zulu and their culture”. So powerful was the music and idea of Juluka (Clegg and Mchunu’s first band) that it was regarded as a threat to racial division. Clegg, who is now 63, was diagnosed with pancreatic cancer in 2015, and is embarking on a final farewell autobiographical world tour before he retires from public life. Clegg’s contribution to creating a new vision of South Africa – as a musician, songwriter, anthropologist and activist – will belong to the ages. By MARIANNE THAMM.

Forget, for an instant, the music and the dancing.

In 2010 Johnny Clegg embarked on a remarkable journey across and through South Africa, its deepest valleys and highest mountains, its remotest enclaves, to interview over 400 artists and to bring their stories into public view. The result was the brilliant 13-part SABC 2 documentary, titled A Country Imagined with Harriet Gavshon as its executive producer.

Clegg is the ideal host. Not only is he an anthropologist, historian, academic and activist, but it is his deep and complete immersion in the diverse physical, linguistic and cultural landscape that makes up this country that renders A Country Imagined a classic document of the threads that bind us – good and bad. It is Clegg’s deep respect for the vision of fellow artists, his ability to attempt to see the world through the eyes of others, which is his greatest gift – a gift he has shared for more than 40 years and with those of us who needed to learn to see and listen across political divides.

As such it is surprising that the SABC did so little to promote the series more widely. Even more surprising is that it has not been listed as an essential resource in school and public libraries, as it is a vital contribution to the excavation and restoration of South African cultural life and its resilience in the face of 300 years of brutal dispossession and oppression. Sadly, it appears as if A Country Imagined is now a rare collector’s item you have to hunt down on the Net.

As such, Clegg will be remembered as pioneer of “crossover” music and “multiculturalism”, an idea which now appears to belong to another era.

An interesting thread on the notion of cultural appropriation and multiculturalism recently played out in the Twittersphere and on Facebook walls sparked South Africa’s homegrown Rachel Dolezal, East Rand DJ Anita Ronge AKA Kasi Mlungu and her assertion in February this year that she is a “black person trapped in a white skin”. It is Ronge’s myopic appropriation and adornment and adoption of the outward accoutrements of Zulu culture that re-opened the dialogue.

One of the questions asked in the unfolding threads in this age where the naïve “rainbowism” of Mandela’s South Africa is being challenged, was whether someone like Clegg, in a contemporary world where identity politics serves as a prism for political debate, could be regarded as having performed an act of cultural appropriation in becoming the White Zulu or Le Zulu Blanc, as he is known in France, in his over 40-year career as a musician and songwriter.

But if we are to judge Johnny Clegg by essayist and poet Rustum Kozain’s notion of cultural appropriation, which he defines as capturing “the unequal dynamic where originators are ignored and neglected and the copycats get the fame and money”, then it is clear that Clegg’s body of work transcends any narrow definition.

Viewed within the historical context of their origins, Clegg and Mchunu with Juluka and later with Savuka, formed with Dudu Zulu, were acts of political and cultural defiance. It was a meeting – in the face of the threats, violence, banning and the bullying tactics of the apartheid state – of two people the state sought to separate by all means.

It was his status as an outsider – Clegg was born in Lancashire in the UK and moved with his mother to what was then known as Rhodesia and Zambia before settling in South Africa – that enabled him to transcend the racial and class politics of his new homeland.

In 1990 Clegg told the New York Times, “I felt like an immigrant. The only time I really felt at home was when I got involved in African music… The migrant workers were themselves immigrants, so we had a similar feeling of marginality in the city… That was emotionally something I could relate to.”

Clegg studied anthropology with Wits anti-apartheid activist, Dr David Webster, who was assassinated in 1989, which influenced the concept of blending or crossing over musical styles. When Mchunu retired in 1985, Clegg formed Savuka, which took the music up a notch into the realm of international stadium-style rock with Afro pop and traditional sound.

But back in the 1970s Juluka’s hybrid musical collaborations served as an example of the triumph of human possibility over brutal ideology and remorseless state control. It was also Clegg’s immersion in Zulu culture, music and the politics of the time that dominated every aspect of black life, which enabled many white South Africans to enter a forbidden world. Clegg opened the door and a window for many white South African to engage with, celebrate and respect lives they had been taught to view as “inferior” or simply not consider at all.

Clegg and Mchunu, who had worked as a gardener in Houghton, were prevented by the laws of the country from performing together in public but they defied this illogic, giving concerts in hostels that were home to Johannesburg’s migrant workers, church and university halls, small clubs and private homes, including that of Des and Dawn Lindberg.

Mchunu was born in Makabeleni in KwaZulu-Natal after his father, a herbalist, had been forcibly removed from Masinga and “resettled” there. Mchunu spent his childhood herding goats and never attended school. It was out in the fields that he fashioned a guitar out of a used oil can and learned to play the instrument. Mchunu was steeped in the popular Maskandi tradition of KwaZulu-Natal. After the death of his father Mchunu migrated to Johannesburg to look for work. Between his gardening job he became a street musician.

Clegg had first heard “Zulu” music at the age of 14 when he was sent out by his mother to the shop and came across Charlie Mzila who played traditional guitar outside a corner cafe in Yeoville. It was Mzila who taught Clegg to play the instrument Zulu style. The young guitarist, who ended up speaking fluent Zulu, first played in shebeens. Neither Mchunu nor Clegg had any formal musical training when they met and neither could read music.

The meeting of the two men in the early 1970s was to alter the South African musical landscape. Juluka’s pioneering blend of Zulu rhythms with a Western folk tradition soon saw the duo playing at large festivals. A feature, of course, was the Zulu dancing and mock stick fights, a tradition Clegg mastered to great delight.

Musicians who joined Clegg and Mchunu in Juluka between 1979 and 1985 included saxophonist and flautists Robbie Jansen as well as Scorpion Madondo, drummers Derek de Beer and Colin Pratley, bassist Gary van Zyl, keyboardists/pianists Mervyn Africa, Cyril Mnculwane, Glenda Millar and Lee Turner. In the six years that Juluka performed together the bank recorded two platinum and five gold albums. It was producer Hilton Rosenthal who helped catapult the band onto world stages where they came to represent the irrepressible spirit of South Africa.

Clegg’s catalogue with Juluka and Savuka is vast. There was a time when he was the biggest selling artist – selling around 5-million copies – in South Africa, filling stadiums and theatres across the country. The popularity and energy of the bands proved hugely popular in the US and Europe. In 1989 he received the Chevalier Ordre des Arts et des Lettres from the French government and in 2015 was awarded an OBE (Order of the British Empire).

Mchunu and Clegg not only created a new hybrid “crossover” sound, mashing up Maskandi with Mbaqanga and folk/rock, but also crafted songs which told stories – of migrant workers, migrant lives, of family life, death, historical battles and ultimately freedom. One of his most distinctive songs remains the plaintive Asimbonanga (We Have Not Seen Him), released in 1987, and which celebrated Mandela and other struggle icons including the murdered Victoria Mxenge, Steve Biko and Neil Aggett.

Clegg was diagnosed with pancreatic cancer in 2015 and received treatment and carried on performing. In March last year, after touring the US, Clegg learned that the cancer had returned. It was then that he decided to embark on the farewell tour before the illness saps him of his legendary energy.

The Final Journey, which Clegg has described as an autobiographical journey, kicks off in Cape Town at Grand West on July 1 before moving to Johannesburg’s Montecasino on July 7 and 8 and Durban’s ICC Arena towards the end of July before Clegg heads off for the Eventim Apollo in London on 19 August, before he leaves for Dubai, Europe, the US and Australia.

David B Coplan, writing in the his 1985 social history of over three centuries of black South Africa’s city music, dance and theatre In Township Tonight, describes Clegg thus; “With his vast store of knowledge and mastery of Zulu performance culture, Clegg is truly bicultural, a remarkable example of what can be done despite apartheid and of what might be possible without it.” DM