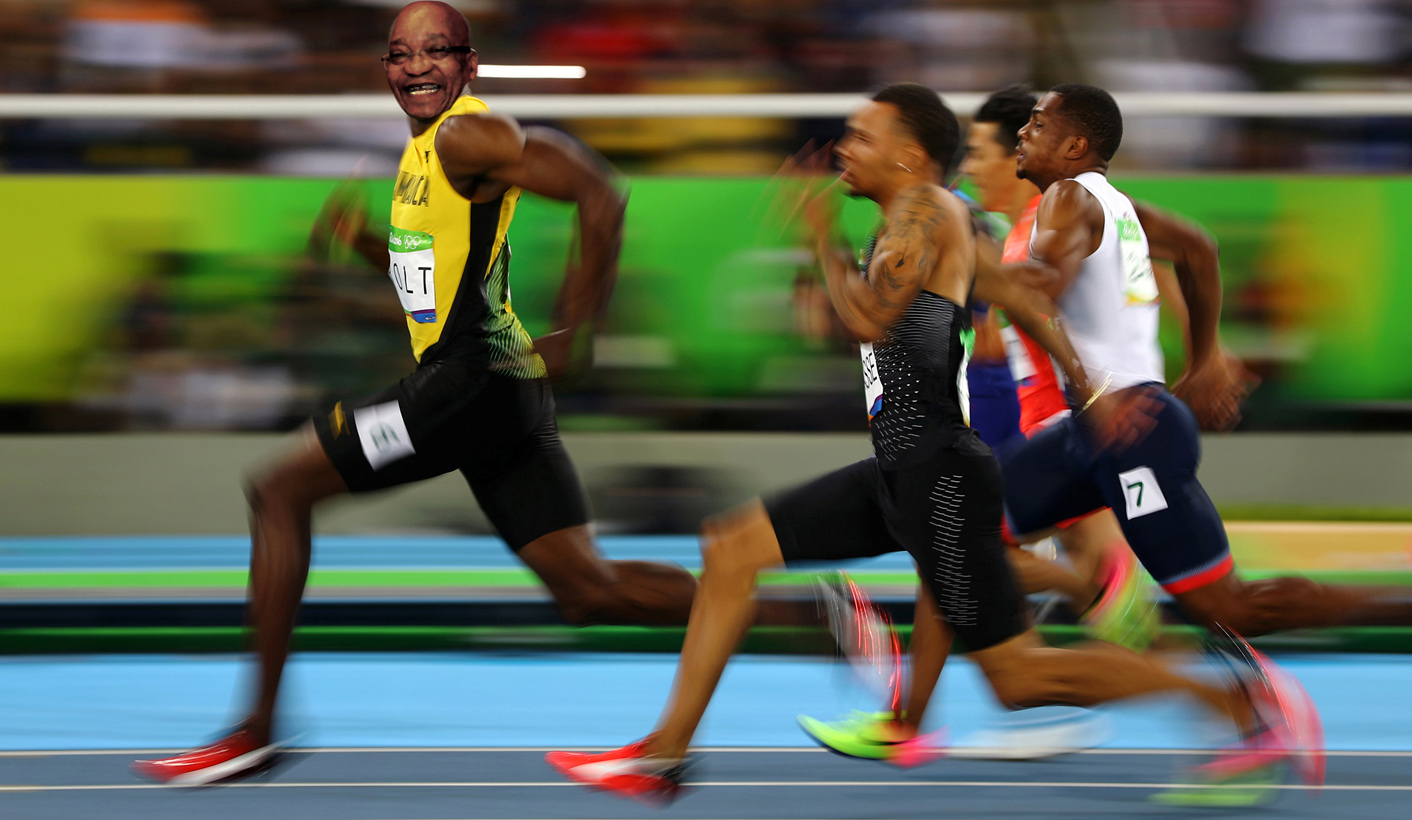 Twice in six days, President Jacob Zuma was unable to address public events and had to be whisked away from agitated crowds. On Sunday, Zuma withdrew from addressing a large community meeting in the volatile town of Vuwani. Last Monday, speeches were cancelled at the main May Day rally in Bloemfontein after Zuma was booed by union members. Zuma has transformed from the leader who enjoyed mass popularity and who could venture into hot spots at will into a president who has to be protected from the people he leads. From Parliament to stalwarts’ funerals to public rallies, the list of Zuma’s no-go zones is growing. By RANJENI MUNUSAMY.

Before the 2004 elections, then Deputy President Jacob Zuma went to hostels in Gauteng to conduct door-to-door campaigning for the ANC. At the Denver and Jeppe hostels, he was confronted by Inkatha Freedom Party (IFP) supporters who would not let him go in.

Television footage captured Zuma standing outside one of the hostels with some members of his security detail negotiating with the IFP supporters who were threatening violence. They reminded him of the Shell House massacre 10 years prior when ANC security personnel opened fire on IFP marchers, killing 19 of them. Although violence in KwaZulu-Natal had subsided by then, and the ANC and IFP had long been in a coalition government in the province, the massacre remained a source of tension.

Zuma had to cancel campaigning at the hostels but did not just flee. He listened to what the indunas had to say and explained to them why he had come. Although the IFP supporters were menacing, there appeared to be no fear on his part.

That was the Jacob Zuma who was able to lead peace talks with the IFP in the mid 1990s, even when tensions ran high during periods of extreme violence in KwaZulu-Natal. The talks broke down several times but he, together with the IFP’s Reverend Celani Mthethwa, kept reviving them. Zuma is largely credited with the eventual breakthrough that led to the normalisation of KwaZulu-Natal years after political violence ceased in other parts of South Africa.

It was that same Jacob Zuma who charmed Cosatu members into believing he was on their side and would act in their favour once he became president. After Zuma was fired as deputy president and during the period he faced rape and corruption charges, Cosatu members rallied around him. When Zuma’s corruption case was first struck off the roll in September 2006, he received a hero’s welcome at the Cosatu national congress in Midrand.

That Jacob Zuma ascended to the presidency as the “people’s president”. Fast forward towards the end of his first administration, and he was booed by ANC members in front of world leaders at Nelson Mandela’s memorial service. And now it has reached a stage where the president has to be shielded from and unable to address the same Cosatu members who carried him to power.

The speeches at Monday’s May Day rally in Bloemfontein were cancelled after Zuma was booed and heckled to step down by protesting Cosatu members. The Sunday Independent reported that Free State premier Ace Magashule has launched a witch-hunt to identify and purge public servants who participated in the protests. If this is true, it would be illegal for people to be targeted and their jobs threatened as a result of free political activity.

Speaking during the World Economic Forum in Durban last week, Zuma dismissed the booing as a normal part of democracy and said those who engaged in protests against the president “are not going to be arrested and they are not going to be harassed”.

“Protests‚ debates‚ booing is part of the culture of democracy. Unfortunately people misunderstand that and misread it,” Zuma said.

“I don’t know what is it that makes people excited. Perhaps it’s newsworthy stuff‚ fine‚ but that is the culture of democracy. I’m very happy that South Africa is very matured and you have a president that they can talk to‚ whatever is in their minds.”

On Sunday, however, Zuma did not show up at a mass meeting at Vuwani in Limpopo to hear what was on people’s mind.

Zuma was scheduled to address thousands of residents of the troubled town where violence has raged sporadically as a result of a demarcation dispute. Last year, residents protested for over three months against a government decision to incorporate Vuwani into “LIM345”‚ a municipality east of the township in Malamulele. More than 24 schools were torched during the protests.

Residents waited about six hours for Zuma while he met with Vha-Venda King Toni Mphephu Ramabulana, church leaders and community representatives. After the meeting, Zuma failed to turn up at the Nandoni sports ground, leading to anger and some incidents of violence.

The crowd chanted Zuma’s name, demanding he speak to them about the demarcation issue. They refused to listen to Zuma’s substitute, Cooperative Governance and Traditional Affairs Minister Des van Rooyen, booing and shouting him down. According to journalists at the scene, Van Rooyen and Police Minister Fikile Mbalula had to make a hasty exit.

Community leaders said Zuma did not come to the meeting because of concerns for his safety. But a statement from the Presidency claimed otherwise.

As negative sentiment grows against the president as a result of his scandals, his relationship with the Gupta family and, most recently, his Cabinet reshuffle, Zuma is increasingly on the run from his own people. He has to be barricaded from the people he serves and can only speak in areas where he still enjoys support. Most of the president’s public engagements are now in KwaZulu-Natal, where the possibility of him being booed is minimal.

At the State of the Nation Address in February, Zuma deployed the South African National Defence Force on the streets of Cape Town because of some unknown threat. It was as a result of his own paranoia that he felt he needed to be protected from ordinary people. In the National Assembly, his armed bodyguards surround him when there is a commotion, even though he has never been under physical threat in the House.

Speaking at a funeral in the Western Cape on Sunday, South African Communist Party second deputy general secretary Solly Mapaila called Zuma a “runaway president”. He said the Guptas had “stolen” the president.

“We no longer have a president; we have a runaway president,” Mapaila said.

Zuma is a democratically elected president who now has to be fortified against those he serves and those who were his biggest supporters. The leader who was able to negotiate peace from KwaZulu-Natal to Burundi and who could walk into danger zones without fear no longer exists.

It is a great irony that the person who once eschewed no-go zones now has to navigate no-go zones for himself across the country. It is what happens when a leader becomes afraid of those he betrayed and failed. DM

Original photo: Usain Bolt of Jamaica smiles as he looks back at his competition, whilst winning the 100-meter semi-final sprint, at the 2016 Olympics in Rio de Janeiro, Brazil. REUTERS/Kai Pfaffenbach