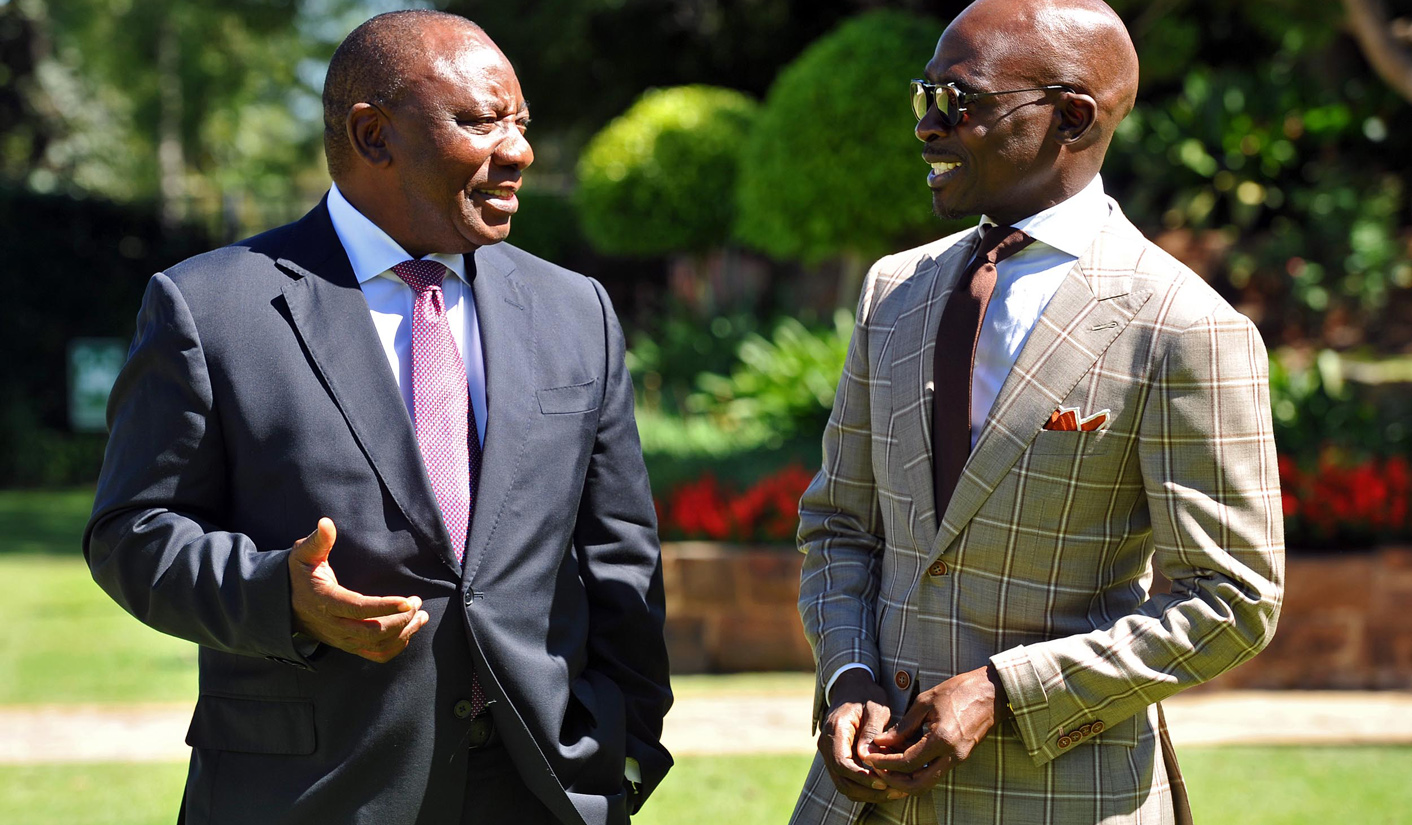 Fresh from the World Economic Forum (WEF) on Africa and an international investor road show, Malusi Gigaba is set for his maiden appearance as newly minted finance minister in the House. It’s mostly sweetheart questions at Wednesday’s economic cluster question time – what is government is doing to save the poultry industry and on radical economic transformation – but as always the real test will be in answering the unscripted follow-up questions, not only for Gigaba, but also Deputy President Cyril Ramaphosa whose turn comes on Thursday. By MARIANNE MERTEN.

Finance Minister Malusi Gigaba will be asked the IFP’s question of what reasons were given by those who declined his invitation on last month’s overseas investor schmoozing trip, his plans for the troubled national carrier SAA (DA) and, by the ANC, on the tax ombudsman’s inquiry over delayed tax refunds.

Question time in the National Assembly is a different milieu from the media briefings, television interviews and Twitter posts Gigaba has delivered since his appointment as the finance boss in President Jacob Zuma’s controversial midnight Cabinet reshuffle in late March. While questions are submitted in advance, and responses can be scripted, there’s not such luxury with the follow-ups. These frequently go to opposition parties, whose MPs have fingers hot on the button to make the list. Without a prepared text, these follow-ups can test a minister’s portfolio knowledge – and political suss.

But first Agriculture Minister Senzeni Zokwana answers ANC questions on saving jobs in the poultry industry – the industry woes triggered by cheap imports and sharp divisions between chicken farmers, and the distributors of cheap imports have been subject of the parliamentary trade and industry committee hearings, most recently on Tuesday.

Economic Development Minister Ebrahim Patel must respond to how his department has “taken forward the government’s commitment to radical economic transformation and what progress has been made in respect of economic and industrial reform to address the legacy of colonialism and apartheid, which is still manifested in the structure and ownership of the economy?”

Meanwhile, Lynne Brown, the Minister of Public Enterprises, Gigaba’s former portfolio before home affairs, again has to respond to the controversial Eskom coal deal with Tegeta, a Gupta-linked company.

Wednesday’s question time in the House comes amid a jam-packed committee programme to process departmental annual performance and spending plans ahead of next week’s budget vote debates. Exactly how much scrutiny is taking place remains elusive, and depends on each committee. Under time pressure, these committee budget briefings more often than not unfold along a rote formula: officials present PowerPoint summaries of spending and performance indicators, the minister or deputy minister talks up the programmes to MPs who may, or not, ask probing questions.

Question in the House time also follows a roster: the economic cluster, social cluster and governance cluster take turns. But Deputy President Cyril Ramaphosa is up every other week.

On Thursday he’ll answer ANC questions on “his assessment of the nation’s progress towards achieving a stable, equal and prosperous South Africa from the ruins of racial division, deprivation and underdevelopment”, and on “government’s candid assessment of the progress, successes and challenges of the back-to-basics programme in light of the 3rd Presidential Local Government Summit” opened by President Jacob Zuma last month.

Ramaphosa’s question times are an intriguing mix of political savvy and steadfast defence of government as the deputy president talks up good news, including in December 2016 the replacement of the “noisy” free condoms with the new improved, flavoured ones. But he sidesteps questions on troubled state-owned entities – Ramaphosa chairs the inter-ministerial committee on SOEs, alongside other government responsibilities such as skills, a national minimum wage and Lesotho – amid often-used phrases such as “much progress is being made”, or “the matter is being addressed”.

The August 2012 police killing of 34 Marikana miners, when Ramaphosa was a non-executive director at Lonmin, has cropped up repeatedly. Now, with a widely reported apology for the Marikana tragedy delivered at Sunday’s ANC cadres forum in Grahamstown – in 2015 Ramaphosa declined to answer questions in the House as he had been summonsed to the Marikana commission of inquiry – it remains to be seen if the issue arises again later this week.

As the deputy president is also ANC deputy president, his rejection on Sunday of calls to keep party tensions in-house could come back to bite him, politically speaking. “We cannot keep quiet and we cannot be silent, and we must refuse to be silent because this is our home,” News24 quotes Ramaphosa at Sunday’s Grahamstown ANC cadres forum. “You can see that the atmosphere is contaminated. What are we supposed to do? We have to talk about this thing so it can change.”

DA leader Mmusi Maimane may just open the door with his question on whether government eyes electoral reform to introduce a constituency-based system for “greater accountability of public representatives to the public first and foremost”. The report of the Frederik Van Zyl Slabbert Commission on Electoral Reform, which recommended a mix of constituency and proportional representation votes, has been gathering dust since 2003.

It’s up to MPs in the National Assembly to make the most of ministerial and deputy presidential question time. And while Zuma is scheduled to reply to the presidency budget debate on June 1, a date for him to face questions in the House this term in line with parliamentary rules has yet to be set. DM