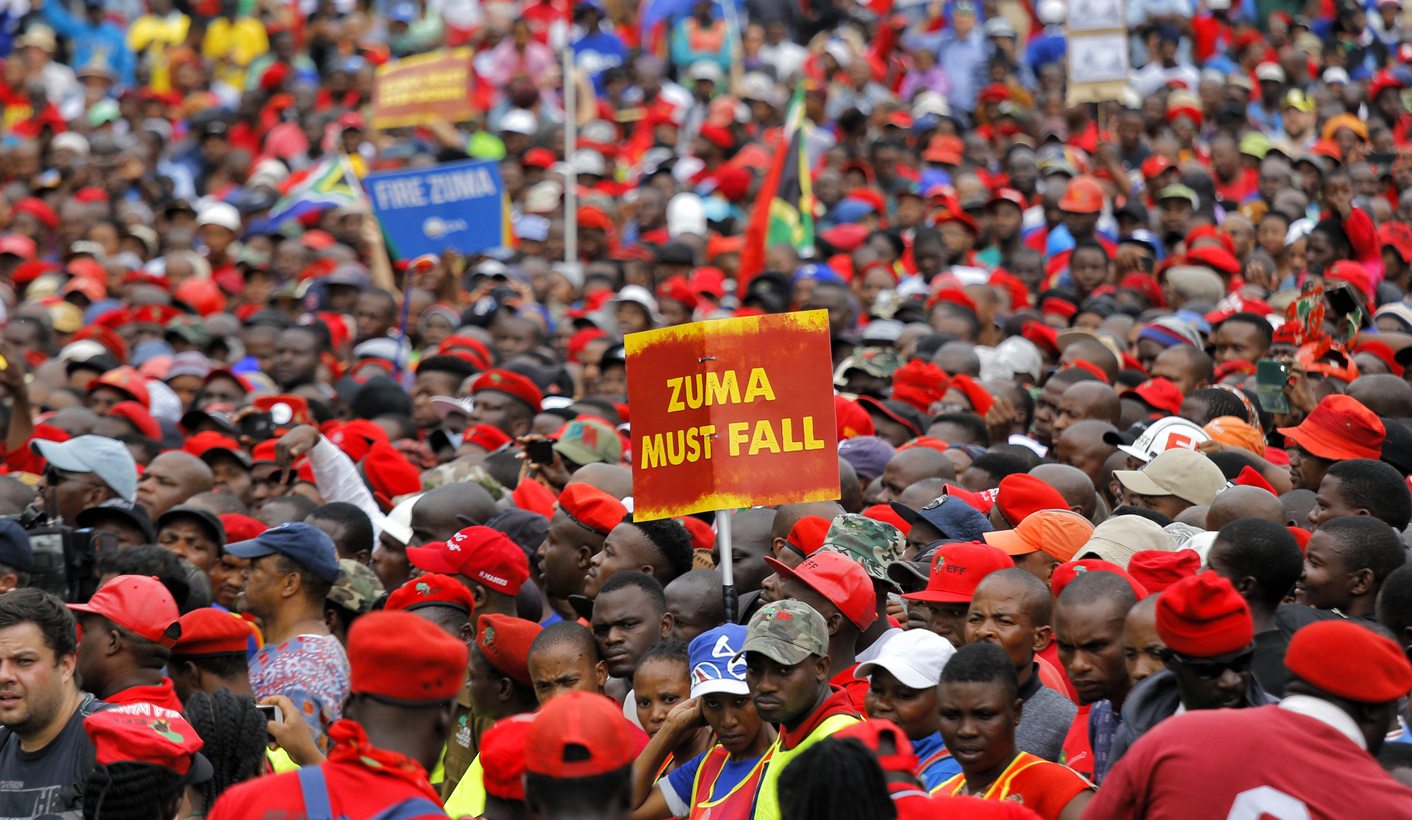 The Zuma presidency has come full circle. He was carried on a wave of mass popularity to the presidency and so it seems that mass power will bring him to his knees. On Wednesday, 10 of South Africa’s opposition parties led a crowd of over 80,000 people to the South Lawn of the Union Buildings, where they demanded that Zuma’s lumbering and destructive presidency be brought to an end. Because South African politics now parodies an epic thespian production, this all happened on the president’s birthday, which was marked at an elaborate celebration hosted by Zuma’s faction in the ANC. This is a time when history and politics are being redefined. By RANJENI MUNUSAMY.

On May 10, 1994 an estimated 100,000 people gathered at the magnificent Union Buildings to see power transferred from an illegitimate and racist regime to South Africa’s first democratic government. After more than three centuries of white rule, Nelson Mandela was inaugurated as South Africa’s first black and democratically elected president. It was a day of unparalleled celebration for a nation rising out of the ashes into a new era with one of the world’s greatest leaders at the helm.

Tens of thousands of people turned up at the Union Buildings, not to praise the president, but to seek to bury his disastrous and highly compromised presidency. This gathering on April 12, 2017 had a vastly different atmosphere. It was a display of a popular revolt; tens of thousands of people from across party lines marched from Church Square in the Pretoria city centre to the seat of power.

Their message was rather straightforward: South Africa’s president must step down or be removed from power.

And so another new era begins. This time the revolution is not led by the ANC, the party at the forefront of the fight against Apartheid and the governing party in the democratic era. The ANC has turned on itself and is convulsing from corruption eating at its soul, the toll of too many scandals involving its leaders, bitter factional battles, the capture of the state by a family that disrespects its political mandate, and a president who has done everything in his power to bring the organisation into disrepute.

The ANC’s decline has been years in the making but the tipping point was solely Zuma’s doing. In an act of irrationality to please those he is beholden to, Zuma reshuffled his Cabinet, dislodging a highly credible team from the National Treasury. Pravin Gordhan and Mcebisi Jonas were fired as minister and deputy minister of finance, for no logical reason, and the director-general Lungisa Fuzile has subsequently resigned. Zuma’s act of wilful sabotage of the economy – the second in 15 months – led to ratings downgrades to junk status by S&P and Fitch, plunging the country into a state of unprecedented political and economic crisis.

Zuma’s leadership has been a heavy burden for the ANC, forcing the party to defend a series of intolerable actions, including a violation of the Constitution. But he has been a boon for the opposition. The ANC lost control of three metros in last year’s local government elections to Democratic Alliance (DA)-led coalition governments.

While Zuma has torn his own party apart, his actions have pushed opposition parties into a united front against him.

UDM leader Bantu Holomisa proposed the holding a summit of political and civil society leaders “to hammer out a common vision, binding to all, of how we should address our country’s problems”.

“We can’t continue marching forever. We must find a way to converge in under one roof to discuss South Africa’s future,” Holomisa said.

The IFP’s Youth Brigade leader Mkhuleko Hlengwa said Zuma was in office to serve his own interests and that of his family.

“Zuma is a failed liberation fighter and must go… We are here with the red card to say Mr Zuma your time has come.”

EFF leader Julius Malema, who stepped into the lead role on the day, told masses of protesters that the national day of action was not a once-off event. He vowed that there would be rolling mass action until Zuma was removed. No memorandum was delivered to the Presidency, Malema said, because the person who occupies the office does not read.

Malema mocked the president’s labelling of the protests against him as racist, saying “If wanting Zuma out is racist, then we are all racists.” He also dismissed claims by Zuma’s allies in the ANC that the ratings downgrades to junk status would only affect the rich and white people.

“Junk status is not an issue of white people alone. It is going to affect the poorest of the poor and less paid workers… When we take power in 2019, bread will be R80 and you will blame us,” Malema said.

He accused ANC Members of Parliament of being cowards, saying they would not vote against Zuma openly in a motion of no confidence debate. Because of threats and intimidation of MPs, Malema called on the Constitutional Court to “protect life” by ruling in favour of a secret ballot in the UDM’s application to the court.

Parliament announced on Wednesday that the motion of no confidence debate had been postponed from April 18 on request from DA leader Mmusi Maimane, to allow the Constitutional Court to rule on the matter.

According to the Presidency, Zuma was in his office on Wednesday morning, meeting with his ministers, but left later in the day to celebrate his birthday at an ANC bash in Kliptown, Soweto. At the start of the event, Zuma appeared fatigued and downcast but warmed up as his deification unfolded. The party could compete with the praise singing sessions of the world’s best despots, with sycophants lining up to extend their well wishes and pledge their unfailing support for him.

Much effort was made to project Zuma as a universally loved leader who would remain in office until his term ended. But it became glaringly obvious that the event was only attended by people in the Zuma faction of the ANC, with the notable absence of four of the party’s top six leaders, Deputy President Cyril Ramaphosa, secretary general Gwede Mantashe, national chairperson Baleka Mbete and treasurer general Zweli Mkhize. Only deputy secretary general Jessie Duarte attended and made cutting remarks in her speech about people who had turned against the president.

In his address, Zuma said he was not bothered by the onslaught he was facing. He said he did not experience stress as it was an affliction of white people. He told his supporters not to worry about the protest action against him and the campaign by opposition parties to remove him from office. He claimed opposition parties were similarly opposed to Mandela and former president Thabo Mbeki.

Zuma ridiculed the protests and calls for him to step down, saying opposition leaders would demand his resignation even if he coughed or sneezed, or if they saw the presidential convoy.

Playing to the gallery, Zuma said he would step down if the ANC wanted him to.

“There are a few more months left before my task as president ends. In December, a new president will be elected,” Zuma said. “In 2019, I will take off my hat of being the state president. I want to tell you that even if you said tomorrow I should step down from these positions, I would do so with a clean heart.”

Zuma promised, however, that even if he were to step down, he would not disappear into obscurity.

No matter how disconnected from reality Zuma is, he must know by now that the ground has shifted. From the moment he recalled Gordhan from his overseas investor roadshow, the country switched into overdrive with a rapid succession of staggering developments. His Cabinet reshuffle triggered an explosion of public anger and accelerated the crisis in the ANC. More and more people are pulling away from Zuma.

Civil society organisations and opposition political parties have discovered the power of a united voice and are now charting a new path ahead to intensify pressure on Zuma and the ANC. While the parliamentary vote against Zuma in a motion of no confidence is a long shot, the focus is again shifting to the ANC with calls for a special national executive committee meeting to discuss the crisis. But the ANC’s state of paralysis is now so rooted that bold decision-making seems rather impossible.

As the mass protest march made its way to the Union Buildings on Wednesday, just ahead of the line-up of leaders, someone dragged the remnants of an ANC t-shirt bearing Zuma’s face along the road. People kicked it along and stomped on it. And as the rally on the lawns rounded up, a cardboard and wire coffin with Zuma’s name on it was set alight. It flamed and then disintegrated into embers as people congregated around it singing “Happy Birthday Zupta”.

As Zuma clutches on to power, he should be aware that the turning tide spells bad news for him and his clique. In the same way he rose to power, he seems destined to fall. If the treatment of his effigies is anything to go by, he could be heading for an inglorious end. DM

Photo: Protesters hold banners as they crowd the lawns of the Union Buildings during a mass protest by all opposition parties in the country calling for President Zuma to step down, Pretoria, South Africa, 12 April 2017. EPA/KIM LUDBROOK