Reporter’s Notebook: From the toy room to the politic...

Reporter’s Notebook: From the toy room to the political frontlines 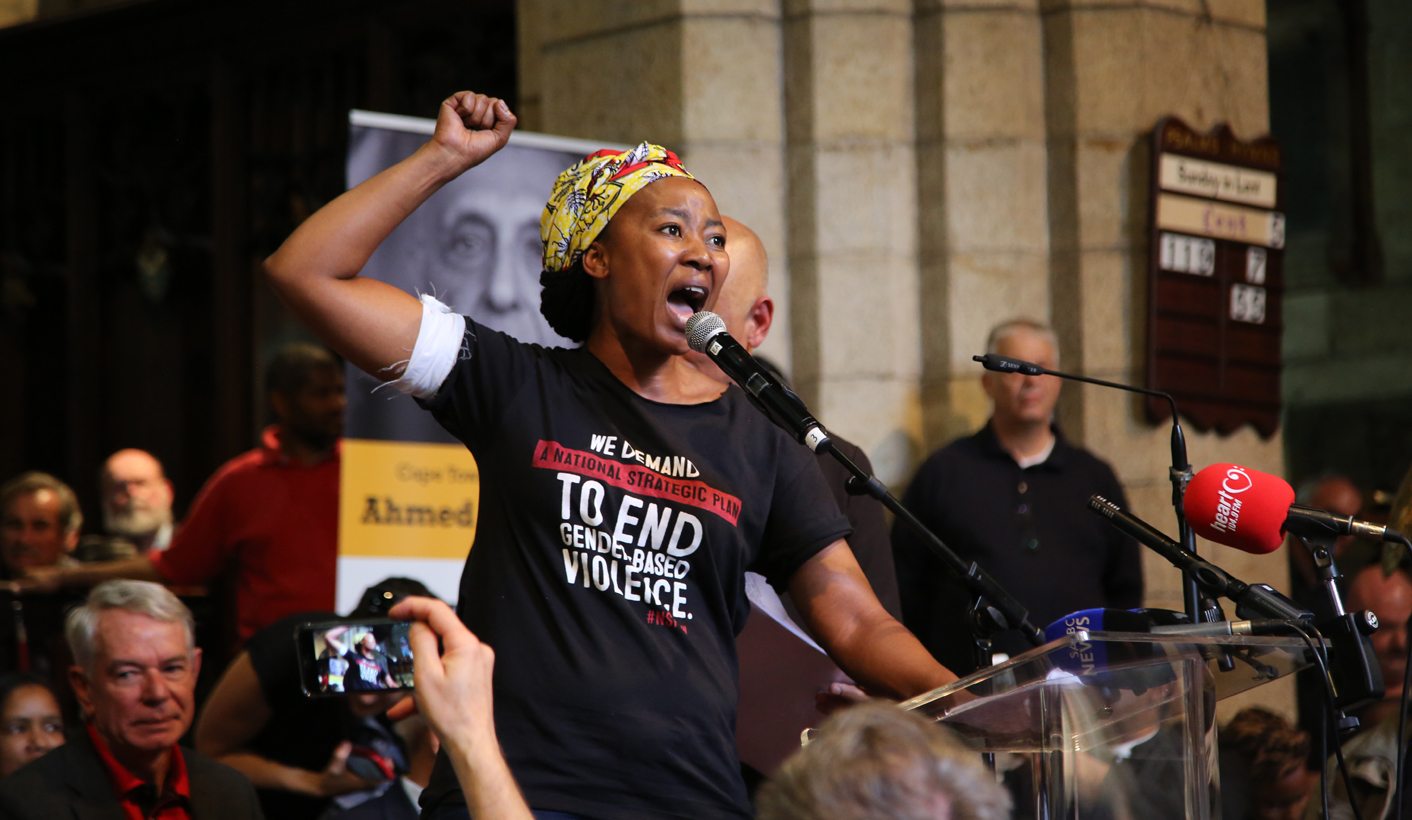 Covering sport is a largely insignificant pastime. There’s a reason these departments are known as the toy rooms. And while it’s easy to disconnect from sport after an intense match, it’s impossible to turn off the dial of South Africa’s current political groundswell. By ANTOINETTE MULLER.

The first thing we are taught in journalism is to remain neutral. The second thing you are taught is that it’s not about you. When covering sport, the disconnect between “us and them” is easy. You sit in a glass box towering over people who get paid to use their talents. Afterwards, you share generic platitudes, and once in a while, you might get an angry message from a coach for being “too negative”.

For the most part, covering sport is fun, inane and, let’s be serious: irrelevant, mostly. There’s a reason sports desks are referred to as the “toy room”. We’re not half as important as we think we are.

Of course there are some incredible human stories, there’s corruption and there’s politics, but most of the time, telling people about people kicking, throwing or hitting a ball around is completely irrelevant to the greater societal context. It’s easy to distance yourself and hover around as a neutral.

But when you throw yourself into the middle of a political groundswell that your country is in, everything you learned in journalism 101 goes out the window. Because here’s the thing about sport and politics. They might both be games, but one’s impact on our everyday lives is far more profound. And it becomes impossible to remain entirely neutral at all times. It becomes far more important to be truthful.

Since the day of the rogue Cabinet reshuffle, sport has felt like a foreign concept to me. Not because of how it impacts on my pension plan, but because of the extraordinary political events that followed it.

As reporters, a big part of our job is to observe. So that’s what I did. On the streets, on social media, from the deluge of press conferences and the flood of pieces written across the web, I’ve observed.

I’ve been enamoured with Barbara Hogan and the resolve she’s shown in a time of tremendous grief. I’ve watched with awe as ANC comrades who still believe in the liberation movement’s socialist values are fighting to bring it back from the brink. I’ve been inspired by the effervescent passion of Vuyiseka Dubula from Sonke Gender Justice’s and I’ve allowed myself to make fun of my melanin-challenged brethren without worrying that I might hurt somebody’s feelings, because we really don’t make it easy for ourselves.

Photo: A small group of people had gathered outside parliament prior to Ahmed Kathrada’s Cape Town memorial on Thursday. They attempted to form a “human chain” from outside the gates of Parliament to the church. While the attempt failed in this instance, the large crowd that turned up on Friday meant that this was quickly forgotten about. (Photo: Antoinette Muller / Daily Maverick)

Ahmed Kathrada’s Cape Town memorial had a profound impact on me. Daily Maverick had three reporters there (including me) and my brief was to file straight news on what Gordhan might say. His address was less firebrand than his previous ones and I flippantly suggested as a headline, “Gordhan walks, talks and quacks like a Finance Minister”.

It didn’t stick, but the service reminded me of the unity we are capable of in this country. “A priest, a rabbi and an imam walked into a church… it was a political rally” might very well become a catchphrase in our discourse. Everyone was welcomed and everyone embraced and mourned for the same thing.

Filing copy after sitting on the floor for two hours was a different challenge. I’m used to filing “on the whistle” for sport, but there was too much to digest and despite having taken diligent notes of the timestamps that I wanted to highlight, my recorder had failed. Fortunately SABC (yes, really) have been very good at getting video up quickly from these events.

Pravin Gordhan’s words were filled with hope. And I am sure that’s all people who came to that service wanted. Hope. Hope that a group of parasitic individuals do not embody the values of the liberation movement that brought freedom to the people of this country. There must be hope when listening to Gordhan, Mcebisi Jonas and others that the ANC is not beyond salvation.

Photo: A car with a sign that says: WTF OMG ZUMA drives past parliament on Thursday. The crowd was small and often silent, but vehicles that passed them hooted in solidarity. (Photo: Antoinette Muller / Daily Maverick)

But this was just an appetiser for Friday’s action. These marches had left me deeply conflicted. I wasn’t in the boat of crapping on people for exercising their democratic rights, but I could not ignore problematic pockets that took part in these marches. But, just like Zuma does not equal the entire ANC, it would be foolish to suggest that this action was exclusively driven by people worried about their pension plans. And if you’re a government official, or Zuma stooge, there was no way you could deny the message these marches sent.

I’d volunteered to run a live blog on the “day of action” with our reporters in Johannesburg, Pretoria and Cape Town feeding drips of info as it happened. Information kept coming at breakneck speed. At a more overwhelming pace than having to do text commentary and update a scorecard when two spinners were bowling in tandem. Remarkably, things largely went down without very serious incident, barring one instance of rubber bullets, a DA supporter getting lost (and beaten) and a bit of rah-rah outside the Gupta compound.

And then, just like that, it was over. Cape Town returned to being the ghost town it was that morning. It was like nothing had happened. Shops were closed by 16:00, the buses ran on time and the South-Easter pounded me into a lamp post.

But it’s far easier to switch off after an intense sporting event than after a whole week of overwhelming political intensity. Once the covers are on the pitch and your copy is filed, life goes on as normal. Most times, I couldn’t even tell you what happened in that game the next day. But this is not a game. And life should not go on as normal.

In an effort to try to digest all the thoughts that had been swirling around in my head, I spent the 20 minutes on my bus ride home scribbling some words into my phone and posting them to Facebook.

I thought little of it. This is what it said:

It looks like everyone had a nice protest. The numbers were impressive and barring a few isolated incidents, things went off without incident.

But I have some bad news, Brad and Becky. Zuma hasn’t fallen and he’s not going to any time soon.

So, what can you do? Well, since you were out there protesting for poor people, not your own capitalist interest, here are a few suggestions.

By Saturday, the post was the most shared, liked and commented on thing I had ever shared on social media. And while that’s not saying much since my updates are usually about how much I like cheese, I stand by every word. Removing a corrupt president through mass mobilisation is possible, but that mobilisation has to remain inclusive. But removing him is not going to be a magic wand to all of the country’s problems.

I hope the message made a few people think. Because at the centre of our jobs as reporters is the mandate to make people think. And right now, we need to think. DM

Main photo: Activist Vuyiseka Dubula chants “Amandla” to rally the crowd at the end of her address at the Ahmed Kathrada memorial. Dubula was one of a number of women who delivered strong speeches at the service. (Photo: Antoinette Muller / Daily Maverick)