Live blog: Anti-Zuma protesters take to the streets in day of action 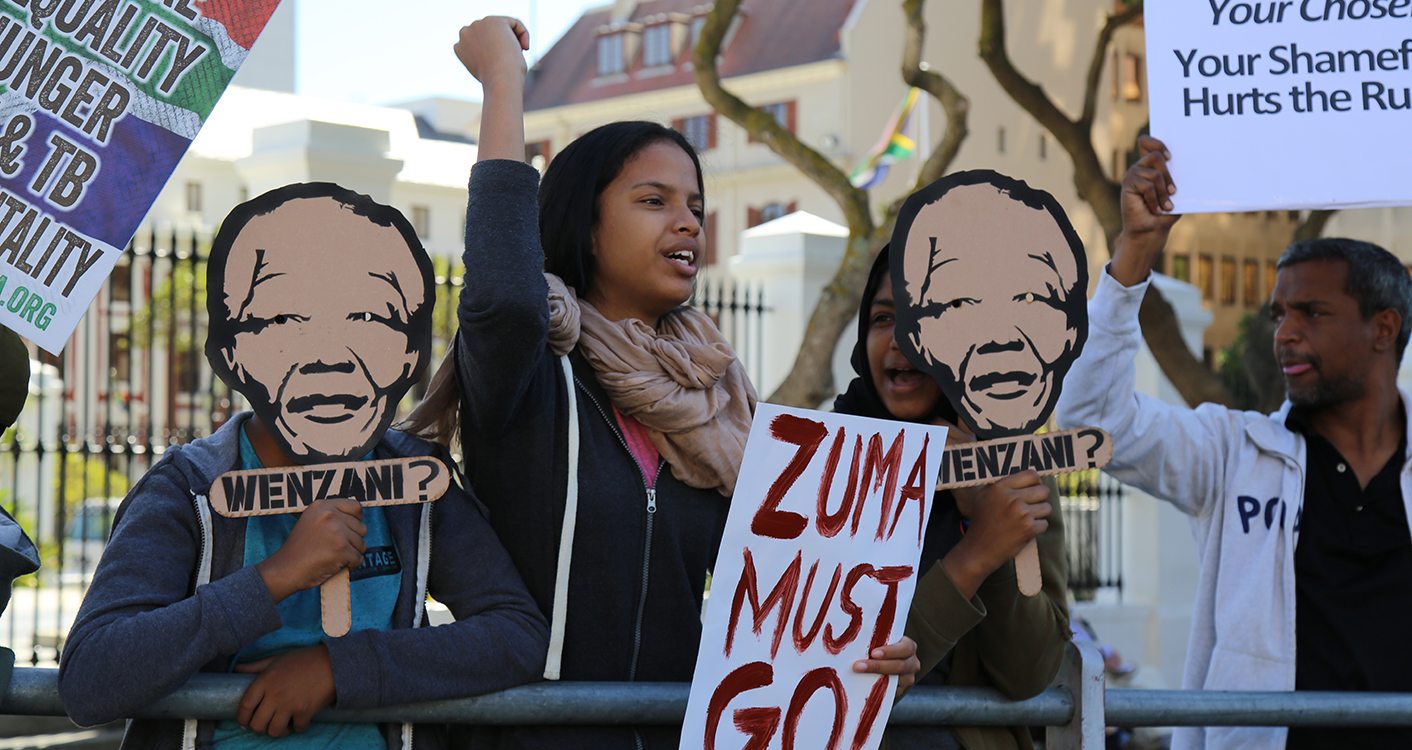 Despite some initial resistance from SAPS, South Africa is set for a day of mass protest against President Jacob Zuma. Refresh the page to see the latest updates from the live blog.

18:08 If you work night shift and you’ve been dossing all day, then you can catch up on everything by reading our recap: #Zumamustfall: Thousands march calling for Zuma to step down. And that’s where we’ll leave you for the day.

18:05 Remember when we said that everyone was going home? Well, not quite. Outside Saxonworld, there has been a bit of a scuffle. Things weren’t quite so kumbaya, we are marching in peace as they were elsewhere in the country earlier today. Anti-Zuma protesters clashed with members from BLF who were there to support President Zuma and… err… The Guptas.  There was stun grenades and teargas and then it all stopped.

15:28 Ayanda Charlie was out on the streets of Cape Town for us, getting some perspective from people.

I’m tired of all this nonsense. Bring Zuma, I can give him a klap over the head with this thing and all our problems will be sorted out. I’m a baker. Bring guys like that to me and I’ll sort him out. In the 1950s, the Italians took to the streets with rollers like this when they protested, the tradition still carries on today.

I am not protecting Luthuli house. I want to see that this rogue president fall because he is stealing from the poor and enriching himself. There are many MK veterans who are not being looked after while a few comrades eat the fat of this land.

15:25 It seems most rallies have dispersed. The Cape Town CBD is like a ghosttown at the moment. Our reporters estimates there were 50 000 to 80 000 people out there today. And that’s just in the CBD. The march to the union buildings had about 30 000. The  numbers were unprecedented across South Africa.

14:32 And another wrap from Popsie

Pretoria is wrapping up. Mmusi Maimane spoke about the threats against his life, which were apparently credible. Hence the bulletproof apparel in Johannesburg. The crowd is disbursing. SaveSA and the other organizers are likely overjoyed with the turn-out and the general vibe.

And here is a picture of that vest taken by Bheki earlier. 14:23 Bheki also reports that the DA are dispersing and heading for the buses. Earlier, Maimane spoke to the crowd, he said: “This is the beginning of a new struggle, a struggle to take back our country. Our country faces a deep crisis, many people feel a deep sense of despair. Today we we are beginning to take our country back. We are better off when we stand together. I have never been more grateful to the people of SA for standing up for our country”.

14:18 Updated from Simon: Luthuli quieting down. Calls on the loudspeakers for people to head to buses.

14:02 Speaking of junk status, here’s an update from Poplak at the Union Buildings:

Big cheers for Mmusi Maimane, even from some Fighters in red berets. ‘We are not a junk country, we have a junk president. We will remove the junk!’ Folks keep streaming into the Union Building grounds. It’s a weird vibe, but a good vibe, sort of like a 90s rave crossed with a church retreat, minus the drugs, plus politics.

13:48 While South Africans have taken to the streets in unprecedented numbers to protest against Jacob Zuma, the country’s economy has been dealt yet another blow. Fitch follows S&P in downgrading South Africa to junk status.

“South Africa’s Long-Term Foreign- and Local-Currency Issuer Default Ratings (IDRs) to ‘BB+’ from ‘BBB-‘. The Outlooks are Stable,” Fitch said in a release.

13:38 Things are extremely tense around the Luthuli House precinct. Violent pockets have been bubbling in the vicinity since this morning. First, three “silent protesters” holding a banner that said: “You must be joking” had to be escorted to safety by MK Vets. Later, police used rubber bullets to disperse other vets and ANC reporters. M&G reports that the supporters “retaliated by chasing the police officer who gave the order to fire bullets on President Street, where he was whisked away in a police van”

13:04 This just in: DA supporter attacked outside Luthuli House.  Rescued from a mob by police. More details soon from Simon Allison.

“Bricks thrown at police van as they bundled the injured DA supporter in, but they managed to get away. No confirmation,  but from here it looked like the DA supporter didn’t know his way around town and found himself in the wrong place. He was spotted about a block from Luthuli and chased at speed. The DA guy looked seriously beaten up. He collapsed when police helped him up and had to be carried into the police bakkie”

13:02 Here’s a quick recap of where we are at. Police fired rubber bullets at protesters in downtown Jozi. MK Vets say they will not stand for the “regime change”. Anti-Zuma protesters were attacked outside of Luthuli House and were chased away, but were escorted to safety by the MK Vets.

People  have mobilised in their thousands and taken to the streets in various pockets of protest.

13:00 Union Buildings are under heavy police guard as the crowd continues to stream into the lawns. Barbed wire protects the fence blocking protesters. So far, the march has been peaceful, reports Greg Nicolson.

12:48 News24 has an exclusive report…the picture shows Tutu shaking his walking stick around. Whic is probably what a lot of us feel like doing.

Archbishop Emeritus Desmond Tutu and his wife Leah on Friday joined protesters outside the retirement home they are staying at in Hermanus, to add their support to nationwide anti-Zuma marches.

Ekurhuleni mayor Mzwandile Masina lashes out at the media, to murmurs of approval from the crowd. “The media in South Africa hates the ANC. They conspire with white monopoly capital to force us out of power.”

Bell Pottinger, PR agency to the world’s worst scum, are not getting much ?? pic.twitter.com/NJsTBUuYzr

12:18 Simon says there is some hostility at the ANC rally.

Small elements of crowd at Luthuli turning hostile. One crowd member ran up to a journalist and knocked his helmet off, prompting intervention from police. Another in full ANC regalia threatened me when I refused to give him my camera, saying “You must run, I will break you”

12:14 EWN and eNCA have just reported that police have fired rubber bullets at ANC protesters in Johannesburg. This video seems to show that. But it’s not currently clear why.

The ANC rally has kicked off at Beyers Naude square outside Luthuli House. There are at least 2500 people here. ANCYL NEC member Sifiso Mtsweni leads the chants and singing, and the DA-bashing. “Helen Zille is a racist. Zille wants to bring apartheid back. Mmusi Maimane is nothing more than a garden boy. He’s a black token. He must continue polishing Zille’s shoes.

11:56 Bheki reports that around 5000 people have gathered in Newton where various speakers are addressing the crowd.

11:19 Greg has an update from where Vavi has just addressed the crowd at the People’s March.

He said it was a “fundamental error” to have backed Zuma. “The important task we must now do is correct the mistakes of 2007,” he said. “When you fight a tyrant you mobilise everyone in society because as long as Jacob Zuma remains in office, as long as Malusi Gigaba is minister we can not talk about the real issues.”

11:09 Bheki Simelane has just caught up with Deputy Minister Kebby Maphatsoe who is not convinced by all this protesting: “We are aware white companies have given their people a paid day off today to go and join the DA. It’s a rent a crowd, and its people who are making our people believe lies. We are not going to be deterred”.

And on South Africa as a country with a leadership deficit: “There is no country that does not trust it’s leader. The country loves it’s leader president Zuma, he was elected by the people of SA under the banner of the ANC. So if they don’t want Zuma they must wait for 2019. We fought for this freedom, we fought for the people to be free so we are defending that revolution.”

10:56 Meanwhile, in Durban, eNCA reports that the crowd at the Durban beach front is growing. Earlier the crowd was chanting: Run Zuma, run.

10:55 There seems to be a lot of action at Luthuli House. It was reported that three protesters were holding the a banner that said: “You must be joking” in a silent protest. As soon as the ANC members cottoned on… things got a bit rowdy.

This from Simon: “Three white people walked into the Luthuli House crowd carrying an anti-Zuma banner. Nearly caused a riot. MK vets did a good job of protecting them and hustling them into a police van.”

10:53 Simon Allison has given us another update from one of the MK Vets:

Raymond Khumalo, 48, is an MK vet from Johannesburg. He was trained in China, Tanzania and Angola. “It’s unfair what they are doing to  Zuma. The same freedoms we brought for them, they are starting to put back in our faces. We let them come to parliament and now they talk shit in parliament. They must watch, if they come here it will be like 1994, when Inkatha marched on Shell House.” 19 people were killed by ANC security guards in 1994 when the IFP marched on the ANC headquarters, in what is now known as the Shell House massacre. Khumalo added: “I love Zuma to bits. He is my commander in chief. He is MK. What corruption? If he was corrupt then he would be in jail.”

10:26 Meanwhile, Simon Allison has filed this report from Johannesburg.

“Some of the supposed military veterans outside Luthuli House look suspiciously young for the title. I asked one commander about the fresh faces in their ranks, and he said they were recruited as pallbearers for the funerals of MK vets that have passed away.”

10:25 Jokes aside, Cape Town’s “Human Chain” attempt is mushroom across suburbia. News24 reports that about 350 people have began their efforts on Rondebosch Main Road. On my way into town, I saw about 12 people bravely battling the South Easter on Keizergracht attempting the same.

10:18 Cape Town is eerily quiet this morning. Even the MyCiti was notably empty. A few small pockets have gathered and are standing strong in the wind, but the joke is that Cape Town has just taken the day off to garden.

08:57 Let’s start off with what’s what. Greg Nicolson has put together this handy little piece for you to digest. Read it here. DM

Stretching your investment beyond its monetary value