#Zumamustfall: Thousands march calling for Zuma to step down 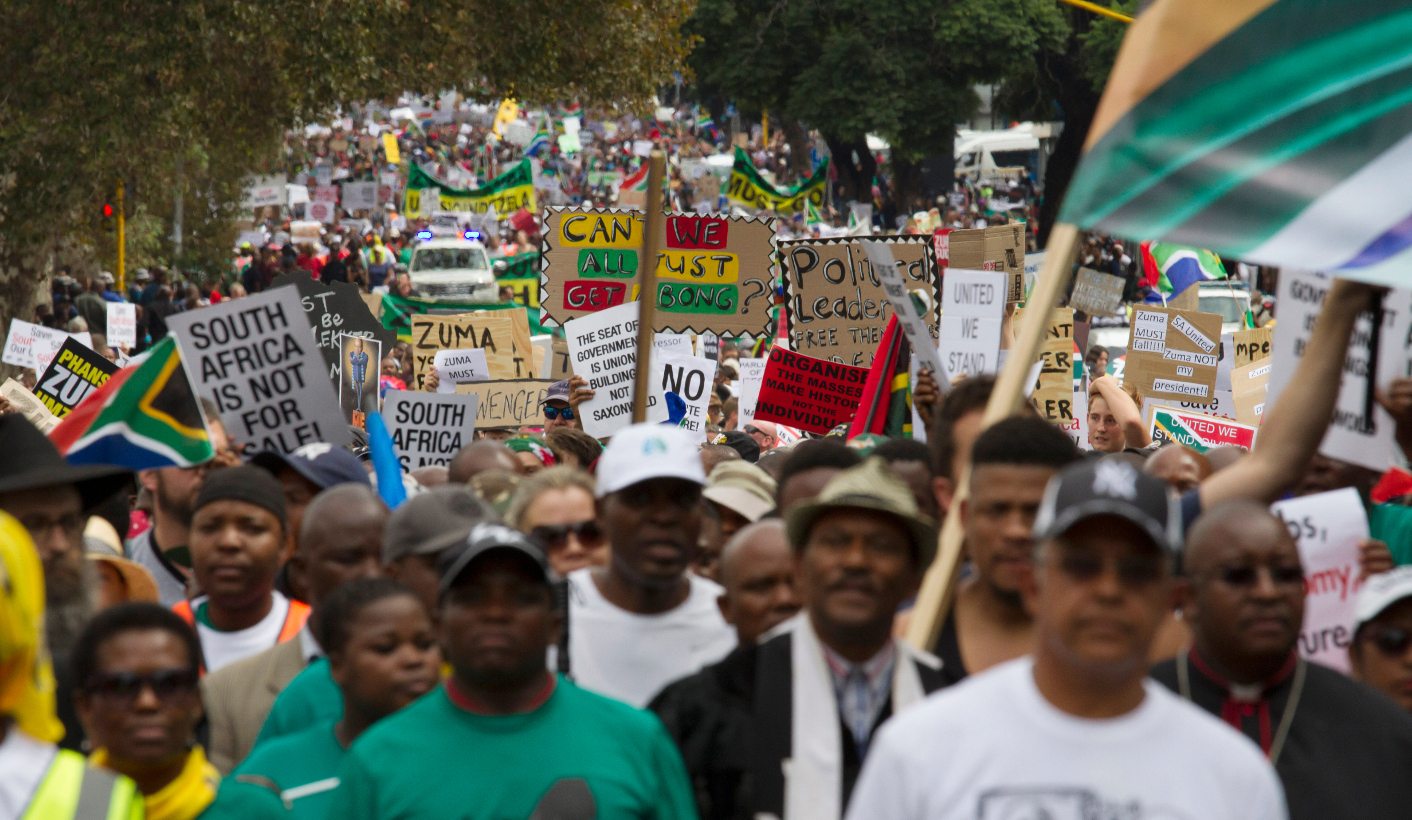 Were Friday's marches a white middle-class expression of dissatisfaction? It was not, or rather, not entirely. It looked like something Madiba would have cobbled together during a fever dream. By DAILY MAVERICK REPORTERS.

Around the country South Africans gathered – some in small pockets on suburban street corners, others in swarming masses in city centres – calling for President Jacob Zuma to go. ANC military veterans responded by surrounding Luthuli House to defend both Zuma and the organisation.

To all appearances, the Pretoria People’s March was both sizeable, diverse and trouble free. At least 25,000 people eventually converged on the Union Buildings lawns. Star turns were offered to Zwelinzima Vavi, Solly Mapaila, Mmusi Maimane and Sipho Pityana.

They were generally unenthusiastic about the latest developments in the country and lo! — in the middle of the speeches it was learned that Fitch followed S&P and downgraded South Africa to speculative status.

“We’re not a junk county. We have a junk president,” said Maimane, who has received credible threats and thus wore a bulletproof vest.

Vavi said it was a “fundamental error” to have backed Zuma. “The important task we must now do is correct the mistakes of 2007,” he said. “When you fight a tyrant you mobilise everyone in society because as long as Jacob Zuma remains in office, as long as Malusi Gigaba is minister, we cannot talk about the real issues.”

Tensions ran high around the Luthuli House precinct where between 2,000 and 3,000 pro-Zuma supporters gathered to defend Zuma and the ANC.

The mobilisation was led by the Umkhonto We Sizwe Military Veterans Association (MKMVA), whose members were out in force in military fatigues, and the ANC Youth League members. Buses had earlier brought supporters from all over the country, including Mpumalanga, North-West, Limpopo, Free State and KwaZulu-Natal.

Most participants at this pro-Zuma demonstration wore ANC regalia, much of it left over from last year’s underwhelming local election campaign. Many were carrying sticks, bricks and sjamboks, and promised to attack the DA if it attempted to march on Luthuli House.

“We came to protect Luthuli. The sjamboks are for the askaris. They’ll get what they deserve,” said Zakelo, a whip-wielding MK vet from KwaZulu-Natal.

Although the crowd was generally well disciplined – mostly thanks to clever crowd control from the MK vets – at least one DA supporter was attacked and injured by an angry mob after finding himself in the wrong place at the wrong time. He was rescued from an even more severe beating by police.

The ANC’s deputy secretary-general Jessie Duarte addressed the demonstration, as well as ANCYL President Collen Maine and Ekhuruleni Mayor Mzwandile Masina. “The DA has mobilised all the money of the rich people of South Africa. We have no money. But we have the people,” said Duarte.

Maine said that criticism of Zuma was misplaced, and that he was the only one fighting for South Africa’s poor. “Today we are told we are junk status. But comrades you have always been junk status. When you go to sleep without food, you are junk status,” he said.

Speaking to the Daily Maverick, Deputy Minister Kebby Maphatsoe said he was not convinced by all this protesting: “We are aware white companies have given their people a paid day off today to go and join the DA. It’s a rent-a-crowd, and it’s people who are making our people believe lies. We are not going to be deterred.”

At several points, protests in central Cape Town seemed like a march in need of a leader. From mid-morning, protesters began to gather on the road in front of Parliament, while others were amassing at Cape Town’s traditional march starting point of Keizersgracht. This split initially gave proceedings a slight sense of aimlessness.

Noteworthy was the almost total lack of police, in stark contrast to the highly visible security presence at other Cape Town marches. On this occasion, a festival spirit seemed to prevail under blue skies.

The jovial mood was sometimes at odds with the slogans borne by marchers. Protest signs expressed unhappiness with President Zuma often in personal ways; one placard carried by a young woman read “Does this ass make my sign look bigger?” with a picture of Zuma’s face.

The march of about 20,000 people to Parliament would have caused jealousy in the Western Cape’s labour federation Cosatu or the ANC, whose marches have attracted significantly less numbers. But Cosatu asked its members not to participate  – “We will never march with the agents on monopoly capital to remove a democratically elected government” – while #FeesMustFall Western Cape issued a statement rejecting the anti-Zuma marches as ones “that will see lazy, incompetent and time-wasting white citizens” protest against a Cabinet reshuffle.

The Cape Town protest was spearheaded by bikers on their roaring machines arriving amid revs, followed by marchers who gathered outside the main gates of Parliament for over an hour.

“We have to be here. We fought in the 80s,” said Thomas Tiny from the No Issues club of Blackheath, Cape Flats. With the motorcycles came pedal power. “I want a better South Africa,” said cyclist Sipho Mejini, raising a South African flag. For “JJ” Julies it was a case of “We want him (Zuma) gone”.

As shops in central Cape Town were closed on the day, or closed early, office workers stepped outside or watched through windows as marchers meandered through city streets. At Parliament a small contingent of police in body armour kept watch outside the main gate, locked like all others, with metal chains and padlocks. A handful of police stood guard inside the gates.

Back in Johannesburg, protesters converged at the Gupta’s Saxonwold residence. A handful of Black First Land First (BLF) members arrived to protest in defence of the Guptas and Zuma. DM

Photo: Thousands of people march towards the Union Buildings during the national mass protests held calling for President Zuma to step down, Pretoria, South Africa, 07 April 2017.  More protests are planned for next week. EPA/CORNELL TUKIRI