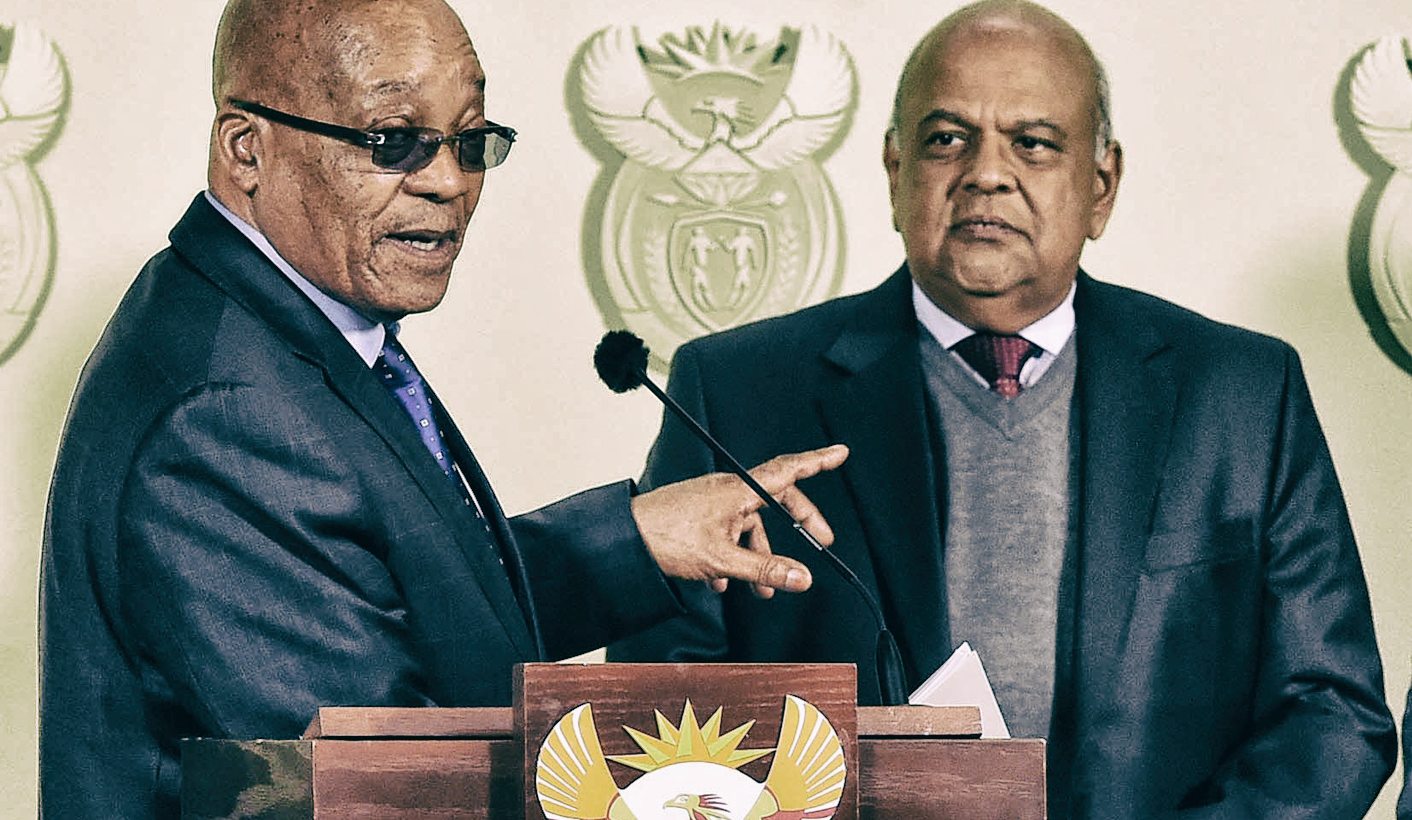 With it becoming clear that the ANC is unlikely to recall President Jacob Zuma of its own devices, opposition parties are throwing everything they can at the courts in the hope that something sticks. This week the DA launched its second court application in a week to try to undo the Finance shuffle undertaken last Thursday, while the EFF is still hoping that the Constitutional Court will force Parliament to take action against the president over Nkandla. By REBECCA DAVIS.

“Save South Africa” seems to be the rallying cry of the moment, and opposition political parties are appealing to the country’s judiciary to do what the ruling party seems unwilling to.

The Democratic Alliance made its first foray to the courts last week in an unsuccessful bid to halt the swearing in of new ministers until such time as Parliament had voted on a motion of no confidence in President Jacob Zuma. No dice, ruled Judge Owen Rogers, who said that the DA’s case was heavy on assumptions and low on facts.

Undeterred by this failure, the DA was back in court this week, with federal chair James Selfe applying to have President Zuma’s decision to dismiss Pravin Gordhan as Finance Minister, and Mcebisi Jonas as his deputy, set aside as irrational and unlawful.

In its court papers, the DA describes the dismissal decisions as “having calamitous consequences” – in particular, the downgrading of South Africa’s rating status – which were “entirely foreseeable”.

While the stated purpose of the DA’s court application is to have the President’s Finance shuffle set aside, it also aims to force the President to answer one burning question: Why fire a high-performing Finance Minister now?

The court paper states that the only explanations given to date have been supplied by other figures within the ANC and the South African Communist Party, and have rested on “a so-called intelligence report which suggested that Mr Gordhan and Mr Jonas were working against the interests of the country”.

If the President did indeed rely on the intelligence report, the DA says, his decisions were irrational. The report – which has been dismissed by, among others, Deputy President Cyril Ramaphosa and ANC secretary general Gwede Mantashe – “cannot provide a lawful or rational basis for a decision of such significance”, the DA contends.

If he didn’t rely on the intelligence report, then the DA describes his decisions as “simply inexplicable”, and therefore also irrational.

No official version of the intelligence report has been shared in public. A version that has circulated on social media is comprised of just four paragraphs without any substantiation. The DA wants the court to compel the President to disclose the report and its source. In its papers, the party says that if the president does not do so, the court should draw the inference that the report is indeed the four-paragraph text doing the rounds, and that it was not authored by State Security.

In the time since the DA submitted its court papers on Tuesday, however, the official reshuffle narrative appears to have veered away from reliance on the intelligence report. ANC Secretary-General Gwede Mantashe told a press conference on Wednesday that the intelligence report was wrongly credited with providing the sole basis for the president’s decision, when actually the most significant reason was simply that the relationship between President Zuma and Pravin Gordhan had irretrievably foundered. It should be noted that this line is in contrast to Gordhan’s own description of affairs, with Gordhan telling journalists last week that there was “no tension” between himself and President Zuma.

The DA’s Selfe told Daily Maverick on Wednesday that the party is not buying Mantashe’s Wednesday narrative.

“We still believe that the so-called intelligence report was the basis for the dismissal of both Gordhan and Jonas, as was stated publicly by a number of top-ranking ANC officials before they were talked into changing their tune,” Selfe said. “Certainly, Cyril Ramaphosa was quoted as saying initially that the intelligence report was the reason for Gordhan’s dismissal.”

The DA hopes to get to the bottom of things via its court application, which requires President Zuma to file in response both the reasons for his dismissal decisions and the record of those decisions – in other words, “all documents which were before him when he made his decisions”.

The President himself has said nothing publicly on the matter beyond the line that prefaced the statement announcing his Cabinet reshuffle: “I have decided to make changes to the National Executive in order to improve efficiency and effectiveness.” The DA says this cannot be taken as sufficient justification of the shuffle because he chose to retain Bathabile Dlamini as Social Development Minister despite her stinging rebuke from the Constitutional Court just days previously.

While the DA has its eggs in the basket of the Western Cape High Court at the moment, the EFF is looking straight at the top. Together with the Congress of the People and the United Democratic Movement, it is asking the Constitutional Court to compel Parliament to hold President Zuma accountable over Nkandla.

Parliament has the power to impeach a sitting president, but impeachment requirements are more onerous than recalling a president via a vote of no confidence. The latter requires a simple majority of the National Assembly to vote in favour; the former a two-thirds majority. (The same requirement holds for the impeachment of judges, incidentally.) With it already seeming highly doubtful that the necessary votes will be found to pass a vote of no confidence, the prospect of impeachment seems yet more unlikely.

Then there’s the fact that the courts have repeatedly expressed discomfort at being used as tools to settle political disputes. In a speech given by former Deputy Chief Justice Dikgang Moseneke in 2015, he reminded his audience: “Courts must defer to the appropriate branch of government when they cannot properly decide a matter without invading their terrain. They may not usurp the role of other arms of state and may not compromise their impartiality.”

If President Zuma is to fall, both the ruling party and Parliament have the necessary power to make this happen. Barring a full criminal case against President Jacob Zuma, a judge is not about to issue Number One his marching orders. DM

Photo: President Jacob Zuma, Finance Minister Pravin Gordhan during a media briefing after a meeting with business and labour leaders at the Union Buildings in Pretoria. South Africa. 09/05/2016. Siyabulela Duda