TRAINSPOTTER: Dead man talking—the Kathrada funeral, and a warning for Zuma from beyond the grave 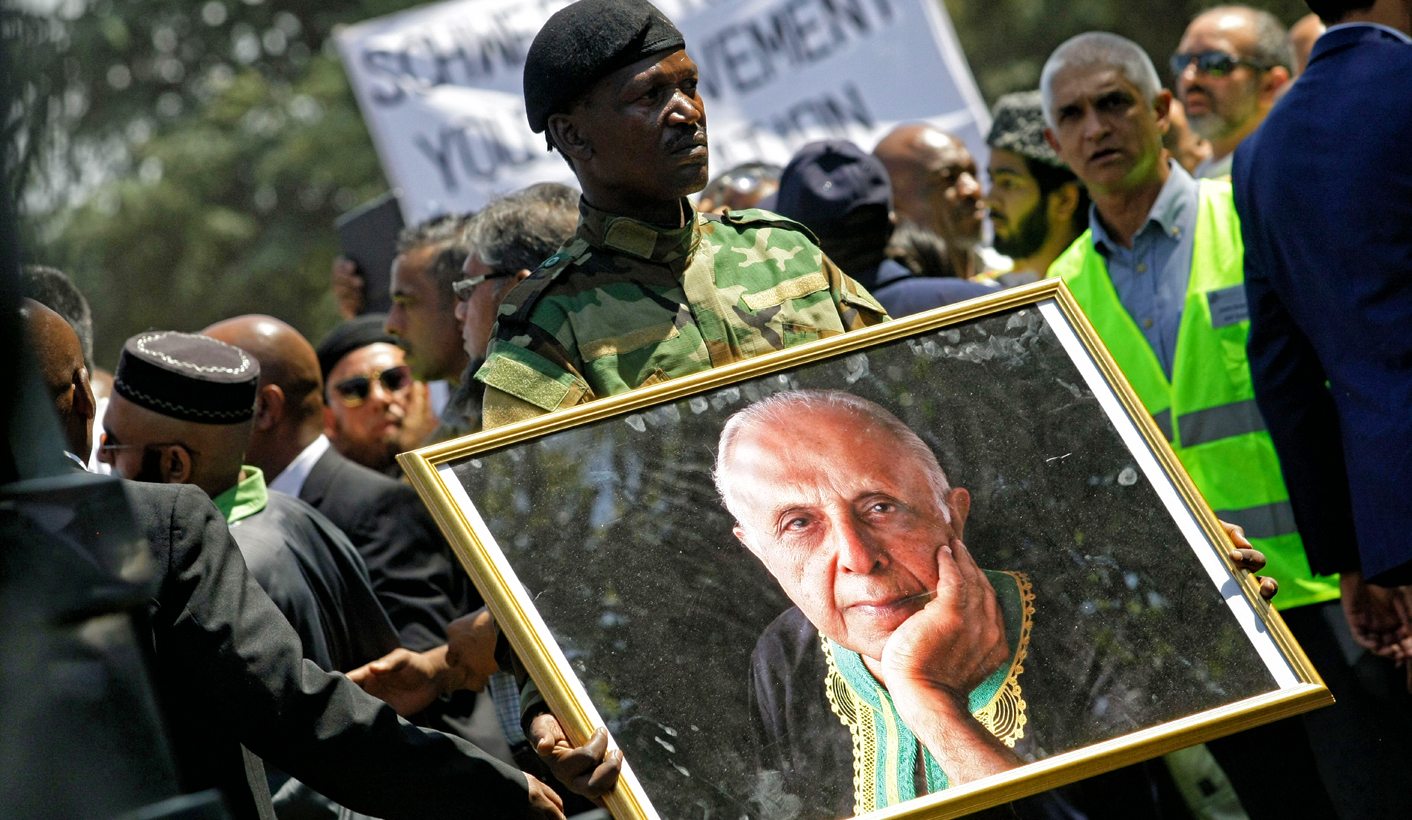 As we learned from Nelson Mandela’s memorial service, the dead do not go out quietly in South Africa. The remarkable life of Madiba’s great friend and struggle icon Ahmed Kathrada, ended in an equally unforgettable manner. He issued a warning to President Jacob Zuma from an ANC-flag draped coffin: death will not stop us from fighting for a movement we lived for. By RICHARD POPLAK.

In Johannesburg, burial rites double as a dark joke: we bury ourselves in mock mineshafts, versions of the Hellish pits that brought both terrific wealth and untold misery to the one-time city of gold, and the country that grew up around it.

It’s the kind of joke that Ahmed Kathrada would’ve appreciated. He had a fine-tuned appreciation for the absurd, earned perhaps in the limestone pits of Robben Island, where he mined whiteness for Whiteness—a Kafkaesque loop that continues to define this place.

And there we all were, in a ceremonial tent in a cemetery in a dead mining town, saying goodbye to one of the comrades who did as much as any one person to redesign our future. Whatever mistakes Uncle Kathy may have made were the mistakes of his generation: he, like so many of his posse, failed to understand that “change” would require a wholesale structural realignment far beyond their ken. They banked on an essential human impulse — goodness — that turned out not to be as essential as they’d hoped.

All of these tectonic historical forces collided under the tent, where the political entity that Kathrada had lived and loved for was pulling itself apart, and the infighting and outfighting was made garishly manifest. To the punter, this may seem undignified — funerals are no time for politics. But political funerals are in fact the pinnacle of politics, and Kathrada clearly understood this.

This one was basically screaming from his wooden box.

For one thing, the president of the republic was (sort of) not invited. The Presidency released a statement this morning expressing Zuma’s regret and sadness for not being able to attend; the Kathrada family had loudly articulated their antipathy towards his presence. A state announced special funeral without the State President: an insult beyond measure. And one that Zuma will have to sustain as he stumbles forward with his grand project of ruining the country.

But that was only the beginning of the subtext. Zuma’s old nemesis, Thabo Mbeki, led the funeral cortège, and sat a few chairs away from Zuma’s new nemesis, deputy President Cyril Ramaphosa, who sat alongside to Kathrada’s wife, Barbara Hogan, who last year told the citizens of this country “to rise up and say enough is enough.” Zuma’s prodigal son, Julius Malema, sat alongside Winnie Madikizela-Mandela, the country’s surrogate mother. Zuma’s ex wife, Nkosozana Dlamini-Zuma, sat next to one of the president’s hench-slaves, ANC deputy secretary general Jesse Duarte. The proceedings themselves were led by Derek Hanekom, who is likely to get whacked from his cabinet position at some point in the immediate future, as punishment for leading a revolt against Zuma in the National Executive Committee last year.

The whole thing was one meticulously curated performance art piece, topped off by the fact that Kathrada had ordered his coffin draped not in the South African flag, but in the ANC one.

This was a family affair.

It was being directed from the Great Beyond by a man with an old school faith in non-racialism, diversity, and multi-cultural rainbowism. There’s a political fetishism in this country, as ahistorical as it is unimaginative, that now mocks those hoary views. But these old guys believed in that shit. Adopting non-racialism demanded serious courage, both physical and intellectual, and they lived its reality, even if their enemies didn’t. Their beliefs got them through some long dark nights, allowing them to triumph over a regime filled with really, really bad guys. Its political untenability is something to be mourned, much like the passing of one of its most articulate proponents. But Kathrada was saying to an audience of millions that it wasn’t dead. The tent itself, with all its myriad stories, was living proof of that fact.

“Even as [Kathrada] lies here today,” mused Gauteng Premier David Makhura, with something approaching wonder, “he is not silent.”

And so the tragedy wasn’t the passing of an 87-year-old man who lived a great, inspiring life. The tragedy was the rest of it. The meltdown of what he lived for. The debasing of his principles by, for instance, a Western Cape Premier Helen Zille, who mistakes free speech for the right to instantly satiate herself — the nightmare of a leadership who rule from the belly for the ego. I wonder if Uncle Kathy found anything sadder than the slow curdling of the liberal project — a political outlook to which he was more than a little partial — into supremacist me-first individualism.

Which brings us to the shadow that was enveloping the tent: Jacob Zuma. The post-colony can cast no more perfectly an example of the colony’s shadow. Unless the president’s faction wins for long enough to write history — and they won’t — he will be remembered as democracy’s arch plunderer, a figure who supervened apartheid and colonialism with nothing more than their Fanonian doppelgangers.

And so, the dog whistling, in the end, became deafening, until the whistles were thrown out for loudhailers. “He was incorruptible,” said ANC Secretary General Gwede Mantashe of Kathrada, to knowing cheers. And then, the moment that will define this historical hinge-point: a standing ovation for former president Kgalema Motlanthe, who strode up to the stage and dropped what might as well have been a grenade into the crowd. He quoted, at length, a letter Kathrada had written to President Zuma last year, to which he had never received a reply:

“[I]n all these years it never occurred to me that the time would come when I would feel obliged to express my concerns to the Honourable President.

It is, therefore, painful for me to write this letter to you. I have been a loyal and disciplined member of the ANC and broader Congress movement since the 1940s.

I have always maintained a position of not speaking out publicly about any differences I may harbour against my leaders and my organisation, the ANC. I would only have done so when I thought that some important organisational matters compel me to raise my concern.”

“I know that if I were in the President’s shoes, I would step down with immediate effect.”

The crowd stood and roared. Politicians looked at their shoes. Moments later, embattled Finance Minister Pravin Gordhan was asked to stand, and wept when he learned that Kathrada was willing to walk alongside him into the latest of his many court battles.

Don’t count this place out yet. Because it was beautiful watching George Bizos helping up struggle hero Andrew Mlangeni, who helped up Bizos in turn. The struggle songs, the genuine love with which Malema addressed Ma Winnie, the sheer ballsy determination of the leadership to not allow the ANC to sink into ignominy, the kinship of it all. It’s a reminder that a movement is a family, and a country — if it is to become a nation of people — is a family, too.

And then, it was on to conclude the dark joke, to inter Kathrada in his fake mineshaft on Hero’s Acre, alongside the rest of the good and the great. But the man who was not at the funeral had just received a warning from the dead: they will not lie down on the job.

And nor, implored Kathrada, should we. DM

Photo: A member of the Umkhonto we Sizwe (MK), which was the armed wing of the African National Congress, carries a portrait of anti-apartheid activist Ahmed Kathrada as he is buried at West Park Cemetery in Johannesburg, South Africa, 29 March 2017. EPA/KEVIN SUTHERLAND