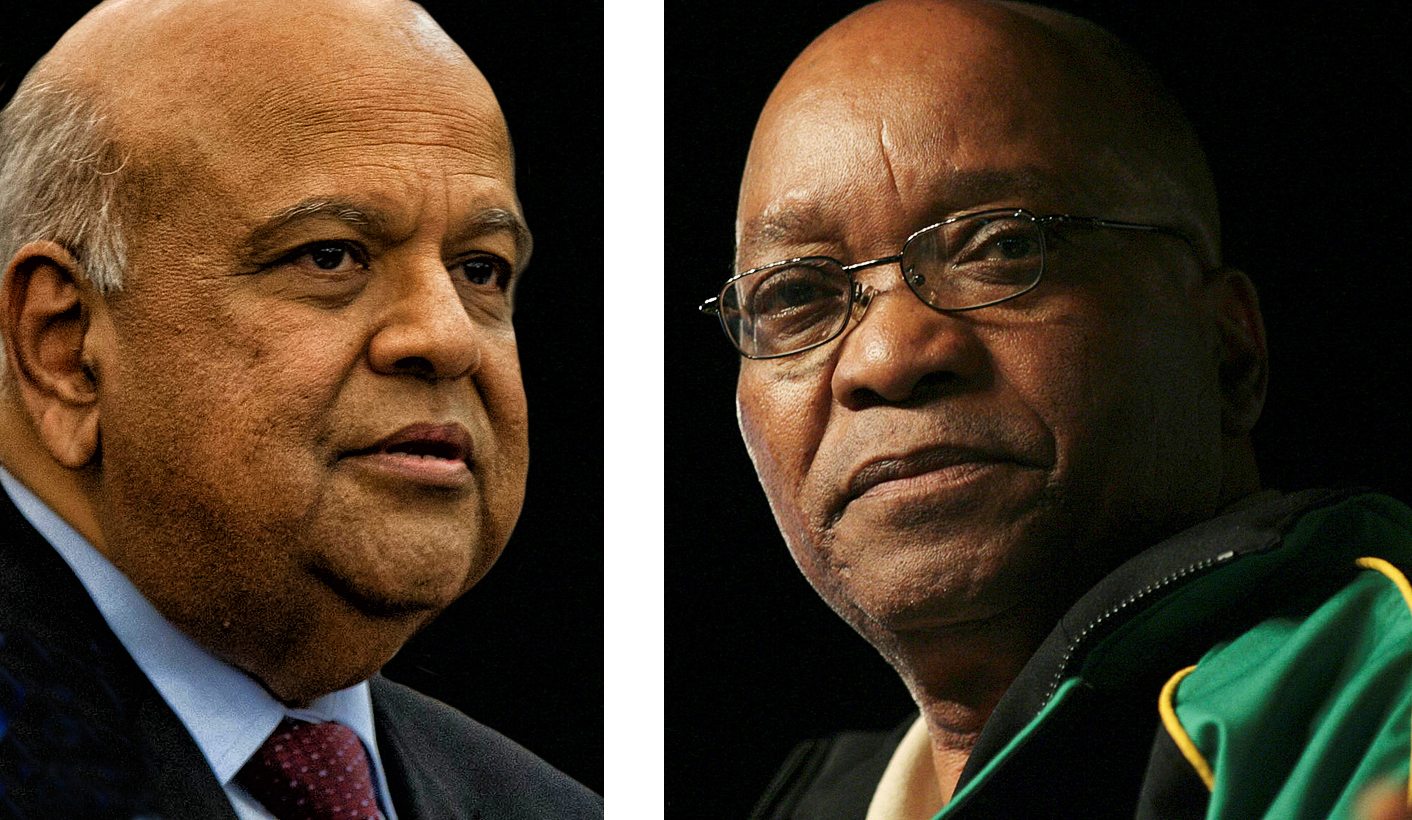 The story of this country is impossible to script. President Jacob Zuma keeps redefining his catastrophic legacy by dragging this nation from one disaster to another. Why would the president sabotage the gains made to steady the economy and the strengthening of the rand by suddenly instructing Minister Pravin Gordhan and his deputy Mcebisi Jonas to cancel an international investor roadshow? It is because Zuma is so beholden to his benefactors that he is willing to pummel the economy and impair the country’s interests by again dabbling with the finance ministry. But this is a complicated gamble for everyone, including Zuma. By RANJENI MUNUSAMY.

President Jacob Zuma had the opportunity on Monday morning to avert the financial explosion and currency tumble. Daily Maverick broke the news that Zuma ordered Pravin Gordhan to return from the United Kingdom and that Mcebisi Jonas would no longer be travelling to the United States as part of an international investor roadshow. After a flurry of media queries, the presidency issued a one-sentence statement confirming that Zuma had “instructed” Gordhan and Jonas to cancel the road show and return to South Africa.

This was the president’s opportunity to explain his motivation to the country and minimise the damage. Whatever his reasons for suddenly rescinding his authorisation of the trip, allowing speculation to run wild did not help the situation. As was the case when he suddenly fired Nhlanhla Nene as finance minister in December 2015, the political turbulence shook the markets.

While Zuma spent most of the day in meetings at the ANC headquarters, Albert Luthuli House, the rand took a pounding as speculation mounted about the reasons for the abrupt recall of the finance minister and his deputy to the country.

There are two possible explanations for the move – both of which serve the agenda of the Gupta family.

This first is a straight-up Cabinet reshuffle that would see Gordhan and/or Jonas removed from their positions. The timing means that Zuma was put under pressure over the weekend, certainly after he had authorised the treasury roadshow. Zuma was at the ANC national executive committee (NEC) meeting from Friday to Sunday and did not mention the issue to his comrades.

ANC secretary general Gwede Mantashe said neither the NEC nor the ANC officials had any knowledge about the president’s decision to recall Gordhan and Jonas to the country. He said the ANC top six officials were due to meet on Monday afternoon, after a bilateral with the South African Communist Party (SACP), and the matter could be discussed with them then. But this was purely up to Zuma.

So who then did Zuma discuss the matter with? It is common knowledge that the Guptas have been trying since Nene’s firing to get a stooge appointed in the finance ministry to do their bidding. Efforts to engineer Gordhan’s removal by pinning corruption charges against him last year backfired.

The stakes are now higher.

The Guptas’ accounts have been closed by South Africa’s big four banks, frustrating their business dealings. Their allies are trying to buy a bank, the Habib Overseas Bank, in a deal worth R450 million, but they require the finance minister’s sign off. And they are unable to grab any more big government contracts for as long as the National Treasury is under the current guard.

On Monday night, several sources claimed that ANC and SACP officials were informed by Zuma that he intended to replace Gordhan with former Eskom CEO and new ANC MP Brian Molefe. This could not be verified. The ANC bilateral meeting with the SACP ended late on Monday night due to intense arguments on the issue.

It is expected that if Zuma did reshuffle the Cabinet, his favoured successor Nkosazana Dlamini-Zuma would be appointed as a minister.

The second reason why Zuma could have recalled Gordhan to the country has to do with the finance minister’s application for a declaratory order from the high court, preventing him from having to intervene on behalf of the Guptas to get their bank accounts reopened. The banks filed papers supporting Gordhan’s application and made revelations about the Guptas’ dodgy dealings that prompted closure of their accounts.

On Monday afternoon it emerged that Zuma was intervening in the case at the 11th hour. According to papers submitted to the North Gauteng High Court by the State Attorney acting for Zuma, the president wants the application by Standard Bank struck off the roll.

“The President accordingly seeks a striking from the roll, with costs, of Standard Bank’s application for the relief set out in Annexure “SB1” which it styles as a notice of motion.”

The papers go on to explain that the president was not a party to the proceedings and “the procedure adopted by Standard Bank is irregular and prejudicial to the President”.

This means that Zuma does not want any ruling made by the high court to be binding on him.

Gupta-owned Oakbay, the main respondent in the case, is not contesting Gordhan’s argument that he has no powers to intervene on their behalf. They say it is therefore unnecessary for the court to issue a declaratory order in this regard.

On Monday the Gupta-owned Sahara Computers filed new papers in court contesting that the state attorney could represent Gordhan, and asked that the minister be made to pay costs in his personal capacity. Gordhan was not scheduled to appear in court and had therefore proceeded on the first leg of the investor roadshow to London. But Sahara argued that the minister should be in court himself.

Sahara also claims that Gordhan is using the court in a political battle against Zuma. They argue that Gordhan wants to impede a proposed commission of inquiry into the banking sector as he wants to protect the banks from scrutiny and accountability. Sahara therefore wants the court to stay out of this alleged power play.

It is interesting that the Gupta company states that an inquiry into the banks is on the cards after the presidency distanced itself from the lie told by Mineral Resources Minister Mosebenzi Zwane that Cabinet had recommended that the president appoint such an inquiry. It means that this is still under consideration and Zwane, a Gupta appointee in Cabinet, simply tripped up on the process by falsely claiming that Cabinet had taken a decision on the matter.

The fight back by the Guptas is clearly not confined to their legal strategy. Zuma is their biggest political asset and they are pulling his strings to assist their case. Zuma’s recall of Gordhan could be to ensure that the minister is in court, as the Guptas’ papers demand, or that he withdraws the application, as they would prefer. And should Zuma’s application to be excluded from the matter succeed, it would free him to appoint the inquiry to put pressure on the banks.

Zuma’s summoning of Gordhan back to South Africa elicited statements of concern from the business and trade union community, which had partnered government to woo investors. Ironically, Zuma had claimed credit for the success of the joint initiative when the ratings agencies granted South Africa a stay of execution at the end of last year.

The Banking Association of South Africa said the president’s actions rolled back the progress made by business, government and labour in building confidence in the economy.

Business Leadership South Africa (BLSA) said the damage caused to investor sentiment should not be underestimated.

“At a time when investors need stability, certainty, and evidence of progress, this action sends exactly the opposite message… The consequences of uncertainty and a (ratings) downgrade include diminishing the ability of our country to remain economically stable, finance its debt, and support the government spending on which so many South Africans depend,” BLSA said.

But Zuma seems not to care about the interests of the country or the political fallout that might result. The pushback he received from ANC and SACP officials on Monday will snowball to other ANC and alliance structures should he act against Gordhan. He is likely to face another rebellion from the ANC NEC, such as the manoeuvre in November to get him to step down from office. Zuma will also face a public backlash as his presidency is increasingly against the public good.

Zuma is such a hostage to the will of the Guptas that he could set himself on fire for them. His presidency going up in flames is of course not the worst thing for South Africa. The worst thing could be what he does in the next 48 hours.

The Guptas have shown repeatedly that they are they are the de facto rulers of South Africa. And Zuma has proven time and time again where his loyalty lies. DM