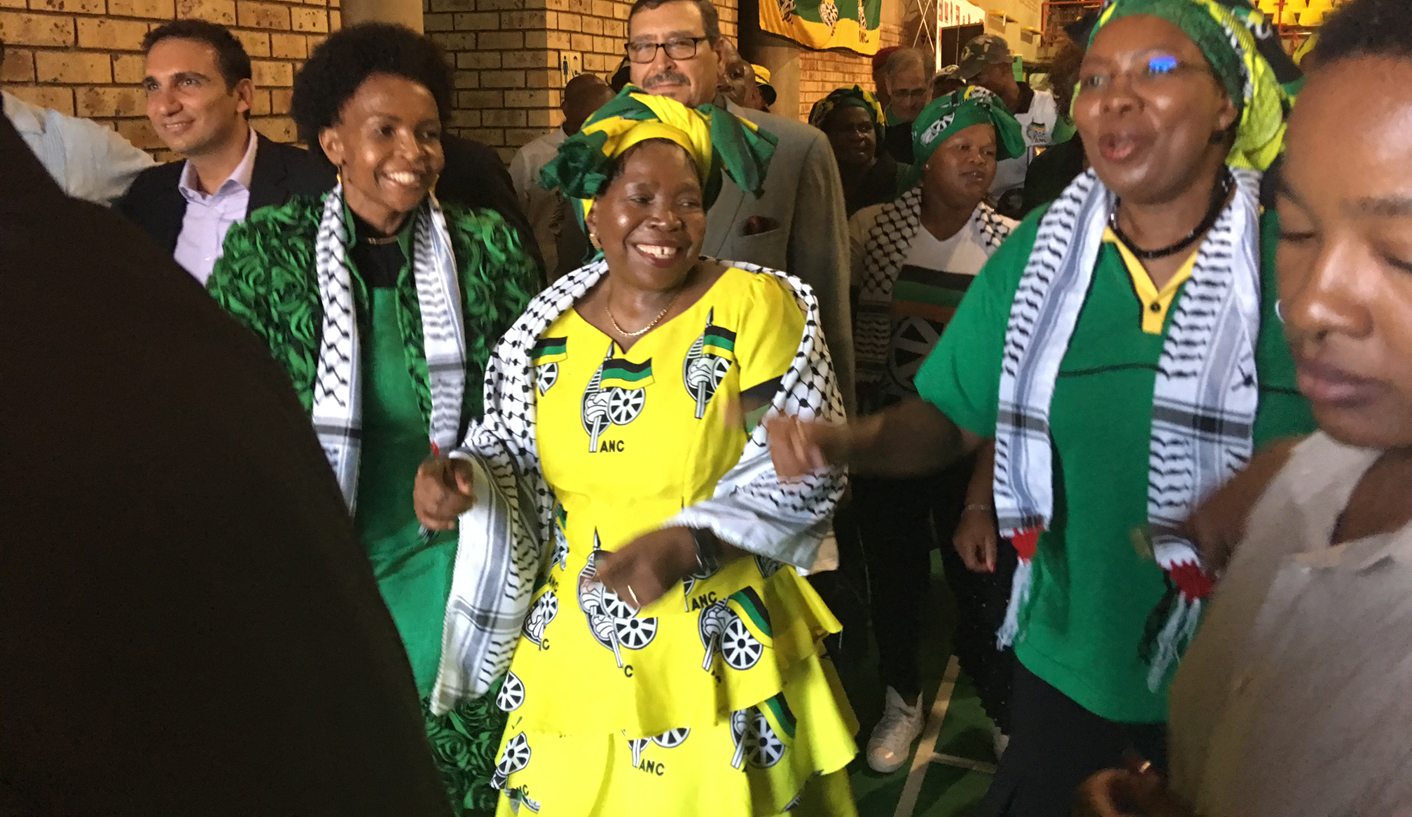 On an insane Monday in Mzansi, only hours after news broke in these pages regarding Finance Minister Pravin Gordhan and his crew being recalled from various road shows, and minutes after an ordinary meeting of the ANC National Executive Committee welcomed back former African Union chairperson Nkosazana Dlamini-Zuma, the erstwhile soon-to-be cabinet minister found herself droning out the keynote “Palestine Lecture” at Ben Marais Hall in Rustenburg. Given that Jacob Zuma’s government has performed woefully on the Palestinian issue, and considering Israel’s influence in Africa increased massively under Dr Dlamini-Zuma’s African Union tenure, perhaps it was only the dog whistling that counted. If so, how’s this: the good doctor was whisked out with a security detail fit for President of the Universe, amid chants of “We are ready for 2019.” Indeed, her Israeli Apartheid Week lecture was light on substance and heavy on subtext. It was nothing short of a campaign event. By RICHARD POPLAK.

It turns out that university campuses worldwide require an entire week to condemn all things Israel. The basic premise is that the Jewish state maintains a system analogous to South Africa’s old apartheid regime—and having spent far too much time in Israel, Palestine, and all points in between, frankly speaking, I’d argue that it’s impossible not to draw comparisons between the assholes that conceived of apartheid and the assholes who run Israel like the world’s most state-subsidized software firm. That said, Israeli Apartheid Week seems like the usual grab-bag of keffiyeh-swathed lefty loud-hailing matches—all of which, the literature insists, occurs under the umbrella of the Boycott, Divestment and Sanctions (BDS) movement.

The local BDS crew seems like a jaunty bunch—after all, they’re hanging out with the local ruling party rather than getting tasered by uniformed Israeli teenagers. These are the same folks who placed a pig’s head in a Woolworths kosher section, and there’s almost nothing they won’t do for the cause. (Regarding the challenges they face, it was noted gravely during today’s festivities that one of their number was “almost expelled from a gym”. Yes, this was an actual thing that was said.) Meanwhile, outside of the occasional sustained academic boycott, the BDS movement has done little to stem the flow of Israeli military tech into your cellphones, vehicles and wireless fridges. Even Wonder Woman is an Israeli.

And don’t let this big group hug with the ANC fool you: the Zuma-era South Africa has been famously—how shall we say?—inchoate with regard to Israel. In 2012, to the sound of numerous press releases, the party adopted BDS as the key tenet of its official Israel policy. This proved to be little more than a gesture, considering that the South African government maintains an embassy in Tel Aviv. Those water cannons that doused protestors and journalists alike during student uprisings? Premium Israeli tech. More egregiously, as many as 150 South African nationals are said to have served in the Israel Defense Force, and have faced no sanction for it.

None of which smacks of a principled stance.

Weirder still, over the course of the last several years, and under Dlamini-Zuma’s chairpersonship of the African Union, the Israeli government has seriously flirted with the locals. Kenya, Rwanda, Uganda, Nigeria and Ethiopia have eagerly accepted those overtures, largely because it comes with the promise of military “co-operation”.

As Kenyan president Uhuru Kenyatta recently noted, “It is critical for us to re-evaluate our relations with the state of Israel given the challenges we on the African continent are faced with today. Those that live in history are never able to move forward. I believe it’s time for Africa to be able to move forward and this is something we intend to champion.”

And so while Israel was not granted official observer status at the AU during Nkosozana Dlamini-Zuma’s reign, not a single word of condemnation was uttered by the prodigal soon-to-be president regarding all of this lovey-dovey stuff. Yes, she apparently “snubbed” Netanyahu when he tried to pay her a visit. But this wasn’t saying much, considering it could take up to a month for African ambassadors to meet with her, and much longer for representatives of the non-African nations which fund an embarrassing 72 percent of the AU’s budget.

After all, there was so much not to do.

Which is a shame, because the ANC was once home to massively principled comrades, for whom the Israeli/Palestinian issue was a real thing. Denis Goldberg, Ronny Kasrils, O.R. Tambo, Ahmed Kathrada, Winnie Madikizela-Mandela—serious people who took an unpopular stance before this stuff was handed over to people who get kicked out of Virgin Active for their sartorial derring-do. But the postmodern ANC is not capable of seriousness. So here we were, in the Ben Marais Hall in Rustenburg, in the midst of 1500 or so bussed-in cadres, many of whom wore Women’s League green, about to listen to Dlamini-Zuma to give what probably counts as a major foreign policy address in a country that doesn’t do foreign policy. (Minister of International Relations and Cooperation, Maite Nkoana-Mashabane, was in attendance. It’s still unclear whether or not she knows what an Israel is).

The hall was hot, and there was much dozing on stage. People spoke, and said what you’d expect them to say. Dlamini-Zuma, wore an ANC doek and ANC colours, and used her keffiyeh as a fan. As she nears the pinnacle of the gerontocracy, she appears small and old and exhausted. And yet she has a way of looking simultaneously sharp and disinterested, like a viciously proficient a fish eagle mid-way through an easy hunt.

But wait a second, was this a campaign event? Because, otherwise, what was the point of this business? When she finally got up to speak, she gave a potted history of the establishment of the State of Israel, AKA the Nakba—conveniently failing to mention the context of the Shoah, of course—and then dove into recent history. She made the usual case for brotherhood with the Palestinians on Pan-African terms; she acknowledged Jewish involvement in both the apartheid struggle and anti-Zionist campaigns. She quoted O.R. Tambo, who uttered these words at United Nations headquarters in front of Yasser Arafat: “Anything that is injurious to any section of humanity is harmful to all humanity.”

“The ANC will remain a committed ally of the Palestinian struggle,” she droned.

The whole speech could have been written by an app. But it was not delivered by an app. Despite a voice that is becoming reedy with age, Dlamini-Zuma may share progeny, assets and outlook with her former husband, but thank whatever vengeful deity lurks in the dank and ancient catacombs of Jerusalem, she is a far superior speaker.

Ag but the whole affair was nausea-inducing and disturbing, largely because the genuine suffering of the Palestinian people was being used to stage a Dlamini-Zuma mini-campaign event. She said less than bupkes, but the shindig was a clear signal to her friends and her rivals—it’s go time.

And boy, does she ever have the means. Outside, a security detail fit for a president awaited her. Despite almost no press and no drunken gogos to threaten her person, the security hacks were extra pushy and super vigilant: they were protecting a high value asset. And yet, this is a woman without a job. As the cadres ate their free lunch and awaited their busses, Dlamini-Zuma was whisked, well, to where exactly?—to discuss what, and under whose auspices?

It may be another shitty day in Gaza, but life is good for those in the Zuma camp. This Israeli Apartheid Week event served as another clear indication that Dlamini-Zuma is being groomed for the top. As chaos swirled in the country, as Ahmed Kathrada—a true defender of Palestinian dignity—lay dying in his bed, and as a coordinated attack on the Treasury was underway, the co-opting of causes for capers was happening in a miserable Rustenburg hall.

The Palestinians could use better friends. So, for that matter, could South Africans. DM