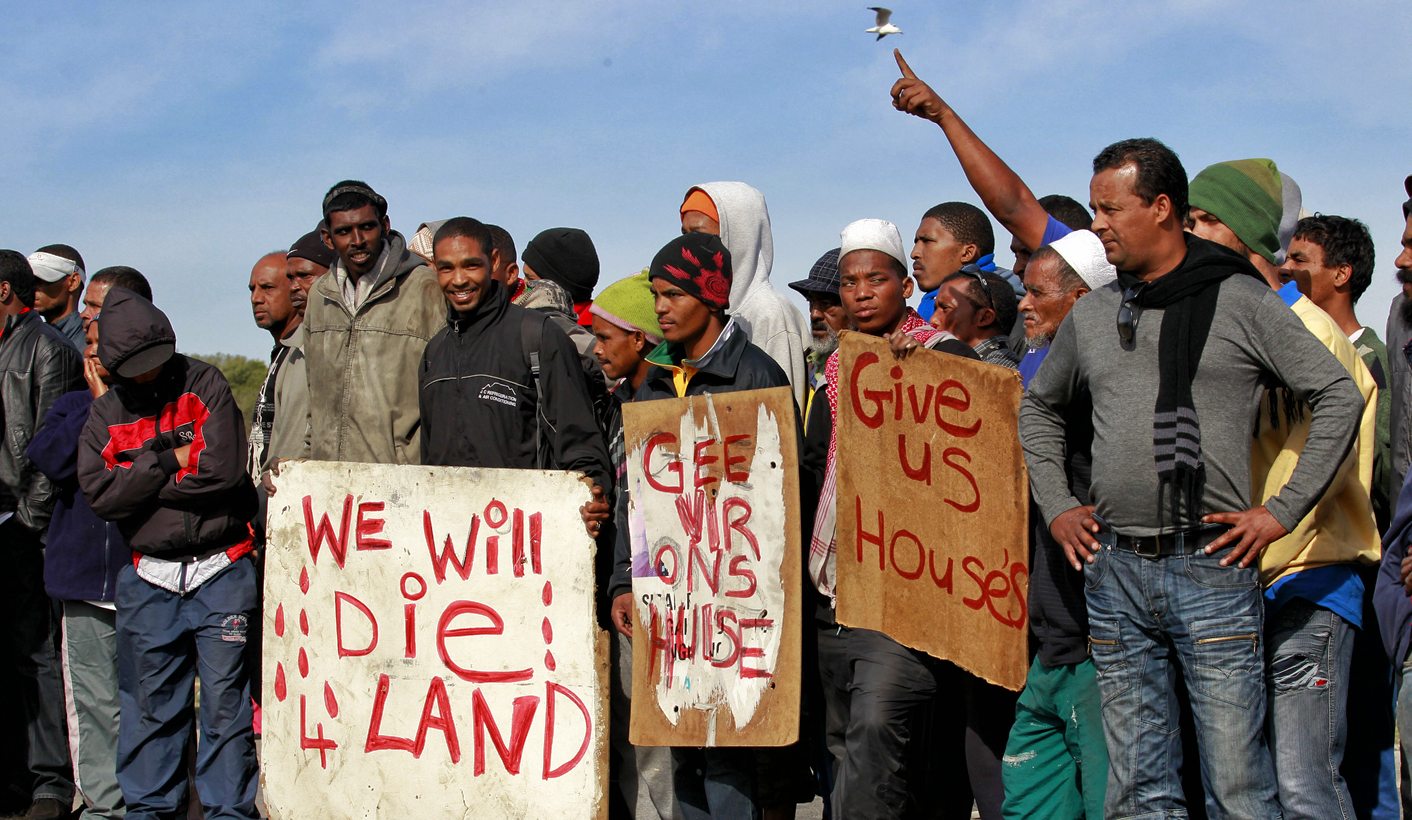 In a country with a history as difficult as South Africa’s, and its tough current reality, it is undeniable that the issue of land and its ownership is always going to be highly contested and emotional. The fact that it so strongly limits the options of so many of our young people looking for upward mobility makes it an ultimate "hot-button" political issue. For various reasons, some entirely legitimate and others more to do with short-term political aims, the voices pushing for some sort of land redistribution or restitution are growing louder. Still, the forces against any kind of radical shift should not be underplayed either. By STEPHEN GROOTES.

What may well be lacking from the land reform debate at the moment is clarity over what the ultimate aims may be. In other words, we should ask yourselves, what do we really want to achieve?

Even before 1994 it was obvious that land reform was going to be one of the biggest problems the new nation that we have tried to create since that day would face. This was one of the more contentious clauses in the Constitution, and why the “Property Clause”, or Section 25, was so difficult to agree to. At the time, there were already loud voices wanting land taken from white people whose families had taken it from black people. While some of those voices may have been in the ANC, the parties that campaigned for a more radical solution to this problem, such as the Pan African Congress, did not gain much support in South Africa’s first free elections.

Over time, there has been a suggestion that Section 25 was the result of a compromise by Nelson Mandela’s negotiators, including the now Deputy President Cyril Ramaphosa, and that he “sold out” on the issue. But this is also to miss the political realities of the time; the National Party government, as it then was, still had much of the power in reality. And people like Valli Moosa, who were part of that negotiating team for the ANC, have said people have actually completely misunderstood what was really happening. He has suggested that the clause was inserted at the insistence of the ANC, because they wanted to ensure black people were never arbitrarily deprived of their property again.

When discussing land, and the future of land policy in South Africa, it may be important to distinguish between two separate and possible goals.

The first is to examine the symbolism that land carries for many South Africans: it was the ultimate aim of colonialism and apartheid for white people to take their land. Different people may view this differently, but it is surely undeniable that the symbolism of land is very powerful.

Just for that reason alone, something must be done.

Then there is the practical purpose which can be served by changing our current situation. What is the ultimate practical aim? Is it to create a new class of black farmers, who own their land, live on their land, and sell their produce commercially, and thus create black-owned wealth and grow food for the country? Is the aim solely to increase the amount of food we produce to reduce any dependence we may have on other countries (and in so doing, reduce the impact of a fluctuating currency)? Or is the aim to improve the situation of people living on farms they don’t own, but work on? There are other possible aims too – should people living in informal settlements who may have a claim to land be encouraged to move to that land to work on it through some other kind of negotiated settlement, perhaps?

What is surely missing from the current debates around land is clarity on these questions. If the aim is to make some kind of symbolic gesture, then we would need to examine what form that could take. And symbolism alone would surely not be enough, you would need practical change on the ground.

At the same time, it is easy to overstate the importance of this issue. While some people may talk about an emotional attachment to land, and legitimately suggest that apartheid will always be present until “the land is returned”, there is evidence to suggest that is not an overwhelming majority. In his State of the Nation Address this year, President Jacob Zuma said that around 90% of the people who lodge a successful land claim end up opting for financial restitution, rather than taking actual ownership of the land. One should not forget here that in many of these cases, communities will have changed dramatically since they were forced off the land. And it may be much easier to split money rather than land, if there is a large number of descendants of the original people who owned the land.

That said, it is unlikely that many people who live in urban areas now would want to move to a rural life, unless the asset they were given control over in the process was worth it. Even if everyone was given a square kilometre of land in the Northern Cape, we probably would not see many people moving back there from Gauteng.

And of course, there are parties who campaign on this issue. And their combined support does not go beyond the 10% mark.

It is hard to find evidence that there is much of a search for clarity in our current public land debate. Julius Malema may say in public that he wants “expropriation without compensation”, but he does not say what that actually means. He appears to be finding a surprise ally in President Jacob Zuma, who is now suggesting that the “black parties in Parliament should join together” on the land issue. But Zuma himself is a latecomer to the land issue. It appears he is suddenly jumping upon it, as if to burnish his “radical” credentials. Considering that he has been in political power since 2009, it is hard for his supporters to explain his eight years of silence on this issue.

Instead, it appears that his new comments are, more than anything else, a result of political expedience and control of the ANC’s leadership battle. In some ways, politics can be about creating conflict, making something an issue, and then forcing your opponent on to the wrong side of it. Zuma would be trying to do this to his opponents, both inside and outside of the ANC, believing that the majority of this country’s people would support him.

But that faith may not be entirely well-placed, if just because many South Africans are not voting for the parties that make this the plank of their manifestos. In reality, there are strong opponents of radical action. And not just the DA (and the Freedom Front Plus). There is evidence of growing resistance to the voices that claim to be radical. People such as ANC Secretary-General Gwede Mantashe and Finance Minister Pravin Gordhan and his deputy Mcebisi Jonas are warning on a consistent basis against measures they’ve labelled as “populist”. This is possibly part of a plan to deliberately label these measures in such fashion, so as to demonstrate how dangerous they could be.

This group of people will explain how food security should come first, how the history of land reform measures has many examples, here and elsewhere, of farms that stop producing food. They will explain how political parties in power generally do very badly in democracies if food prices rise too quickly. They will also be very wary of unlocking the door to changes to the Constitution.

Unfortunately, this situation taken as a whole suggests that there is not likely to be real land reform for the foreseeable future. If those calling for radical change do win in December, they may not necessarily implement what they say they will. The fact there is no real detail about what they actually want to do certainly suggests there is no plan ready to go. And those who oppose them would possibly continue to fight back, whether they were inside or outside the ANC. DM

Photo: South African community members stand off against police on the disputed Swartklip land scene of land grabs and evictions over the last few days as millions of South Africans head to the polls for local government elections in Cape Town, South Africa 18 May 2011. (EPA/NIC BOTHMA)