Prasa: Feud continues, with no end in sight 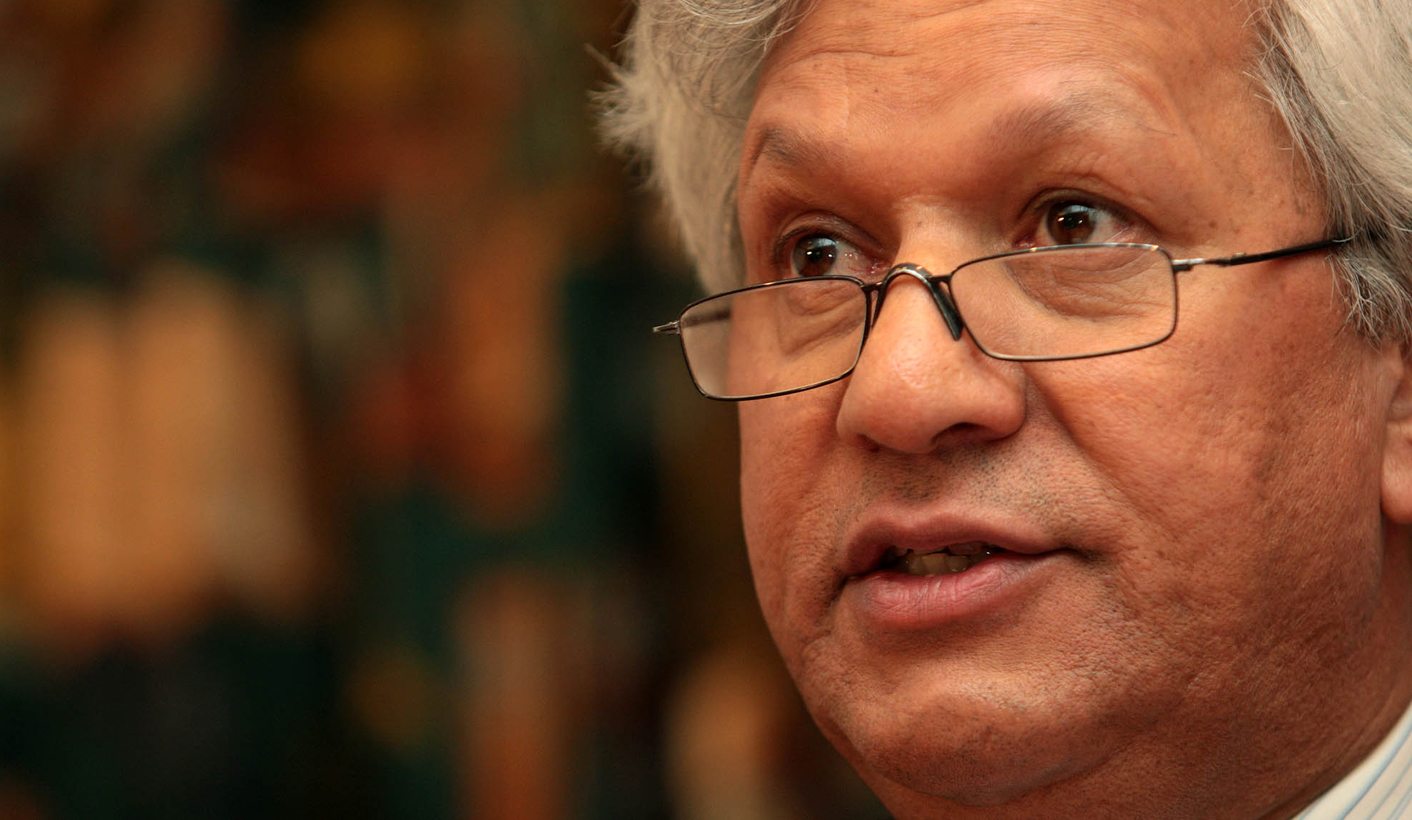 As the Prasa saga heads to court, Transport Minister Dipuo Peters on Monday announced members of an interim board. As Chairperson, she appointed Nazir Ali, former Sanral CEO responsible for the e-tolls debacle in Gauteng. By GREG NICOLSON.

An hour before Transport Minister Dipuo Peters was due to explain on Monday why she fired all eight members of the Passenger Rail Agency of South Africa (Prasa) board, lawyers for the dismissed officials sent an e-mail to the minister and department of transport officials. They warned that any announcement of an interim board would be unlawful and would pre-empt matters before the court.

Peters went ahead anyway. She announced an interim board to replace former chairman Popo Molefe’s team and hit back at allegations that have arisen while Prasa’s leadership is once again in turmoil. The former board will this week take Peters to court in an attempt to be reinstated. Both sides claim they’re fighting mismanagement and corruption.

Peters on Monday claimed that Prasa had underperformed in the current board’s term and that public spats – most recently between the fired acting CEO and the board – meant an entire new leadership was needed. “It is unfortunate that despite my laudable and persistent plea to both the board and the acting [group CEO] not to further exacerbate the instability at Prasa, compromising good governance and further bringing the organisation into disrepute, the public spats continued unabated and it seemed to have fallen on deaf ears,” she said.

The board, said the minister, “was found wanting relating to amongst others the declining performance, lack of good governance, lack of financial prudence and ever deteriorating public confidence due to spates of in-fighting”.

The former Prasa chairperson, however, said there was an ulterior motive. Popo Molefe, in an affidavit to the High Court seeking an order declaring the dissolution of the board unlawful and asking for the reinstatement of him and six of his colleagues, made blunt allegations against the minister. He suggested the board was dissolved in retaliation for its decision to sack action group CEO Collins Letsoalo, who was seconded to Prasa last July from his position in the department as chief financial officer.

“Do we live in a society where government officials may use their power recklessly and/or with a clear ulterior motive, with absolute disregard for the law or the effect of their conduct on the republic?” asked Molefe. “There can be no clearer case of an abuse of public power; irrational exercise of statutory power and ulterior purpose.”

His claims hinge on two points. After reports from the Auditor-General and public protector, uncovering billions in fruitless, irregular and wasteful expenditure at Prasa, the board contracted Werksmans Attorneys to work with the Hawks, Treasury and auditors to investigate the parastatal’s contracts. Molefe said between R13- and R24-billion in fruitless, irregular and wasteful expenditure was uncovered and civil proceedings had been launched to review and set aside contracts worth R7-billion.

Peters has criticised the Werksmans investigation and Molefe said dissolving the board would jeopardise corruption investigations and remove those who had the institutional memory to take them forward. He repeatedly suggests that removing the board might be an attempt to limit Prasa’s attempt to recover funds from dodgy contracts.

Molefe also draws a link between the board’s dissolution and the firing of acting CEO Letsoalo. He was sacked after it was reported he insisted on being paid an acting allowance of R380,000 a month after demanding his salary match the annual remuneration of R5.9-million paid to former CEO Lucky Montana. Molefe said Letsoalo went on a “personal campaign to restructure Prasa and enrich himself”; he said he didn’t attend meetings and flouted correct procedures to appoint senior officials.

“The dissolution of the board has got nothing to protect Letsoalo or stop the investigation. I want to say to all of you, if it was a matter of protecting Letsoalo I would have said Letsoalo must remain and the board must go,” said Peters on Monday. Letsoalo has returned to his position as chief financial officer in the transport department, which is waiting for a report from Prasa and will decide whether to discipline him.

The Department of Transport’s acting director-general Mathabatha Mokonyama on Monday dismissed the warning from Molefe’s lawyers against naming an interim board. He said everyone has the right to go to court, but the minister could not adhere to every request and felt restoring governance at Prasa required an interim board to be appointed without delay.

“The absence of the board in itself would have ended up being an audit query so it is important that as a shareholder we comply with the laws of this country and make sure that there is stability, and we have done that,” said Peters.

Molefe claimed that the board should be reinstated because it needed to continue battling maladministration and corruption, but Peters noted the issues as a reason to appoint new leadership. She has also taken issue with Werksmans Attorneys being retained to investigate the issues.

“You cannot allow for situations where the investigation runs on its own,” she said, saying the investigation needed terms of reference and an end date. She said the contract wasn’t budgeted for, meaning it in itself could result in irregular expenditure, and the cost of the investigation has blown out to R127-million. According to Molefe’s affidavit, Peters last year called for an end to the investigation, which he said was “startling”, but she later clarified that it must have a conclusion date, which was set for July 2017.

The SA Transport and Allied Workers Union (Satawu) welcomed the appointment of an interim board, while also hitting out at the dissolved Prasa board:

“We think this board will prove that good corporate governance is not about vengeance or revenge but about setting up structures to ensure the organisation is well-managed and accountable to the various stakeholders,” said the union’s Zanele Sabela.

DA shadow minister for transport Mannie de Freitas said that after the appointment of the interim board it was crucial for ongoing investigations to continue. “It is vital that the current investigations under way into the gross mismanagement of Prasa continue so that any findings can be implemented to ensure the efficient running of the entity.”

De Freitas claimed that speculation is rife that Peters dissolved the board to avoid taking accountability for Prasa’s mismanagement. He questioned a number of the new board members. As Chairperson, Peters appointed Nazir Ali, former Sanral CEO responsible for the e-tolls debacle in Gauteng, while, De Freitas claimed, Xolile George, CEO of the SA Local Government Association, and Frans Baleni, former general secretary if the National Union of Mineworkers, were supporters of President Jacob Zuma. The appointment of Tiyani Rikhotso, Peters’ former spokesperson, was “equally questionable”, he claimed.

Peters said the interim board members were chosen for their specific experience in their various fields. The minister said Prasa’s management remains the same and operations won’t be affected by the recent changes. Investigations into corruption and maladministration will continue, she said. In addition to Ali, George, Baleni and Rikhotso, Ronny Mkhwanazi, Natalie Skeepers, Contance Maleho, and a representative from Treasury will also be appointed to the interim board.

Parliament’s committee on transport last week announced it would launch an inquiry into leadership problems at the parastatal. Committee chair Dikeledi Magadzi said last week, “As things are now, there is no sense that the board is in control of anything. It does not seem that there are controls at the entity to ensure good governance in line with legislation. That said, the committee is of the view that the entity could still be saved.”

Behind the disputes between Prasa’s board, its CEOs, and the minister, is a list of corruption allegations. They often involve contracts worth billions and, between the allegedly corrupt and those pursuing the corruption, it’s hard to tell who, if anyone, is on the right side of the law.

Take the example of Prasa’s attempts to challenge the R3.5-billion contract involving Swifambo Rail Leasing, related to its procurement of the Afro 4,000 locomotives. The matter is part of Molefe’s claim to be tackling corruption and court papers include allegations that the deal involved a kickback to a lawyer claiming to be fundraising for the ANC. The party has strenuously denied it had links to the deal and former Prasa CEO Lucky Montana has accused the now-dissolved board of pursuing a vendetta against him. Further, he accuses Molefe of profiting off the investigation from Werksmans.

Each player in the saga claims it’s representing the interests of Prasa and the country in the fight against corruption and maladministration, which all seem to agree exists. But with almost endless personal feuds and the parties at odds as to how to tackle corruption, the battles will continue to play out.

The courts, and MPs in the parliamentary inquiry, could once again become the deciders of truth, but Prasa’s ongoing crises show it will take years to sort out the mess at one of the country’s most important state-owned entities. DM