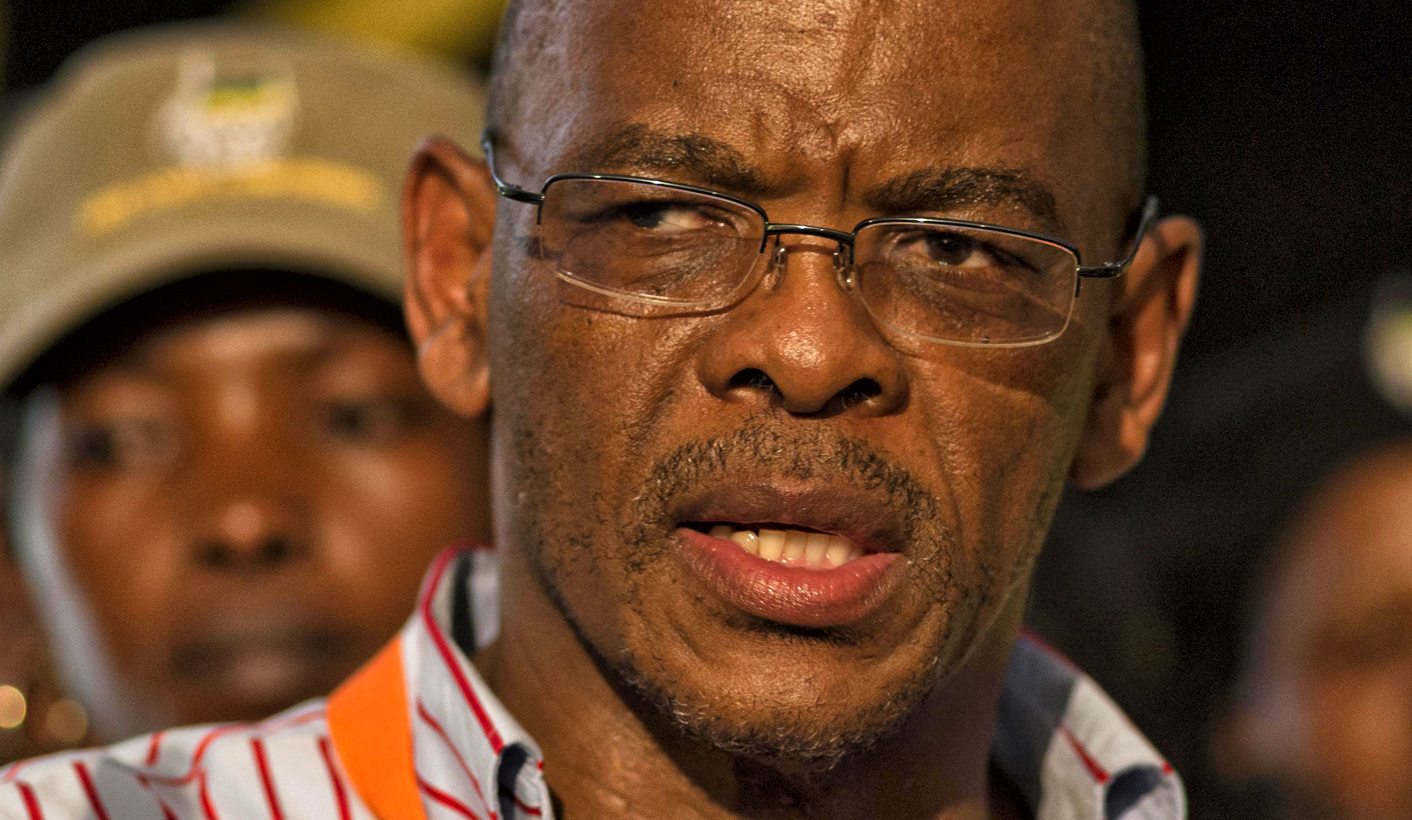 A Free State provincial department has irregularly awarded a sweeping, open-ended tender to a company owned by one of premier Ace Magashule’s close associates, amaBhungane can reveal. By Tabelo Timse, Sally Evans and Sam Sole for AMABHUNGANE.

The provincial department of police, roads and transport is in hot water after it bypassed the State Information Technology Agency (Sita), an entity that is by law responsible for managing large information and communication technology (ICT) tenders for government.

Instead the Free State issued and awarded what it calls the “One Stop ICT Fusion Centre” tender without Sita approval.

The three-year contract was awarded in June 2016 to TAD Consultancy and Services, a company headed by Deena Pillay, who was Magashule’s secretary while he was provincial sports minister in the mid-90’s.

Pillay did not respond to amaBhungane’s emailed questions.

Sita spokesperson Bontle Tsikwe confirmed the tender was of a type that should have gone through her agency as required by government procurement legislation.

“Sita was not consulted concerning the tender. The agency was only approached on (3) May 2016 to verify if certain service providers were accredited with Sita and a response was provided accordingly,” said Tsikwe.

For mandatory services government departments have to procure from or through the agency unless an exemption is received.

The provincial department has refused to say what the tender is worth or what milestones have been reached since it was awarded.

According to an official from the department of police, roads and transport it seemed as if the tender was “engineered” to go to TAD, which has profited from multiple Free State contracts with Magashule’s administration.

The official, who asked not to be named, told amaBhungane his suspicions were raised after the department sidestepped Sita.

Alarm bells also went off when the tender specifications were published and, said the official, “were vague and basically covered anything under one umbrella”.

Bidders were asked to provide a province-wide system for security camera surveillance and traffic management – all centralised in one control room; a voice-over-internet telephone service for more than 5,000 civil servants; an employee time and attendance system, as well as a patient management system.

One of the losing bidders told amaBhungane the specifications were too broad. “We didn’t know whether they wanted us to provide the equipment as well or what. In our presentation we did mention that the specs would need to be narrowed down.”

Although the tender asked for a quote on the “total bid offer”, the notice of award to TAD noted the contract value merely as “as and when needed” – underscoring the perception that the tender was open-ended and impossible to price accurately.

In responses to questions, the department denied the tender was irregular or tailor made for TAD and pointed out that there were five bidders, though only two were “responsive”.

The department said TAD had been appointed on “an ad hoc basis … subject to market related quotation as per services” – but did not respond to questions about the amount paid out so far under the contract.

Another source, a former employee who asked not to be identified, claimed: “TAD has no skilled staff in their employ and almost everything is outsourced to other companies.”

In this case, after winning the tender, TAD outsourced work to two other companies: BBTech and Tech Mahindra.

This emerges from the minutes of a “project inception meeting” dated August 18, 2016 and chaired by Sandile Msibi, who heads the department of police, roads and transport. Msibi is said to be Magashule’s ally.

The minutes record Msibi as saying that BBTech was the small enterprise partner to TAD and would receive 30% of the work, while TAD’s Pillay introduced Tech Mahindra as the “solutions partner”.

Pillay is recorded as saying: “Tech Mahindra and BBTech will be entering cessions with TAD Consultancy to allow the department to pay their services directly to their respective accounts.”

The same minutes document notes that during the meeting Msibi introduced three project managers the provincial government chose as its “representatives”.

Their job, Msibi said, was to be “present in the planning of the project roll-out plan”.

Matsobane Tlhapolosa, the acting director for ICT operations in the Free State’s department of police, roads and transport, was one of the three project managers.

But amaBhungane subsequently discovered that before Tlhapolosa joined the provincial government, he worked for the winning bidder for almost three-years.

Tlhapolosa’s LinkedIn profile says he was a network administrator for the company from April 2011 to January 2014. He moved to the department of police, roads and transport in February 2014.

Operation Hlasela is a state-funded programme established by Magashule in 2009 ostensibly to drive service delivery.

The DA and Cope accused the ANC of using Operation Hlasela as part of its campaign before the 2011 municipal elections. In 2012 the parties lodged a complaint with the Public Protector’s office.

Former Public Protector Thuli Madonsela released her findings in May 2016.

She found no conclusive evidence that the ANC misused Operation Hlasela. But she sustained a complaint about the conflation of party and state.

And while there is no evidence Tlhapolosa interfered in the ICT tender process, amaBhungane has been unable to confirm if he ever declared his previous relationship with Deena Pillay.

Msibi’s office did not return amaBhungane’s messages or emails in relation to this issue.

In response to previous questions put to him by amaBhungane, Msibi defended the ICT contract and said the correct procedures were followed.

Tech Mahindra did not reply to amaBhungane emailed questions, but its involvement seems to be a re-run of an earlier engagement with the Free State and Pillay.

In 2009 Pillay, apparently acting as an agent, introduced the Free State department of economic development to Mahindra Satyam.

In late November 2009 a delegation, including economic development MEC Mxolisi Dukwana, visited India where an agreement was reached paving the way for 40 students from the Free State to be dispatched to Mahindra Satyam in India for training.

However, it became apparent – in the words of one delegate — “that the company had a lot of expectations that they would get projects from the Free State government” in return.

The concerns were such that Dukwana decided the engagement could not continue.

Now Tech Mahindra seems to be repeating history: It hosted a junket for a Free State political delegation to India in 2015, accepted a batch of 50 students for training in July 2015 — and now appears to be riding on the coat-tails of TAD’s Free State contract.

Coincidentally, Tlhapolosa was part of the 2015 delegation.

Magashule’s spokesperson Tiisetso Makhele did not address allegations that there was a perception that Pillay received contracts because of his association with the premier. DM

Sidebar: A playground for cronies

Critics suggest the “Fusion Centre” contract is emblematic of an informal but seemingly entrenched network of businessmen and government officials who are aligned to Ace Magashule and seem to survive controversy and indeed prosper under his administration.

That impression casts a shadow over Magashule’s ambitions for the national stage, come the ANC’s elective conference later this year. He has been widely touted as a candidate for one of the “top six” positions.

Two key figures in the Fusion Centre contract saga are players in this network, though it extends well beyond them.

Msibi heads the department of police, roads and transport.

He is a former Mangaung municipal manager who was abruptly removed by Magashule in 2011 after the South African Municipal Workers Union accused of him of corruption, incompetence and ignoring labour agreements.

Magashule then immediately appointed him to the head-of-department post.

Objections to his appointment were raised with the Public Service Commission, but Magashule said these had been found to be minor and technical.

Msibi was re-appointed for a further term last month despite an allegation of using departmental lawyers for personal matters.

He is also being investigated by the Public Protector for allegedly using the department’s letterhead to solicit money for an ANC fundraising dinner where President Jacob Zuma was a guest speaker ahead of last year’s local elections.

Msibi has denied both allegations.

Pillay and his family have managed to secure dozens of state contracts in the Free State since Magashule became premier in 2009.

Contracts, some multiple, have been concluded with the Mangaung Metropolitan Municipality and the Maluti-a-Phofung municipality; Centlec, the electricity supply authority; the departments of agriculture, health, education and police, roads and transport; as well as the premier’s office and the Free State Training and Development Institute, a project run by Magashule’s office.

There have been previous allegations that TAD has benefited from its perceived association with Magashule.

For example, in 2011 the Free State Times and Volksblad reported that TAD was given a 10-year, R25.7-million lease contract without a tender to accommodate the Free State Training and Development Institute.

Industry experts told the newspaper at the time that the project should not have cost more than R3-million. The department defended bypassing normal tender procedures saying the project was “an emergency”.

Pillay sat on the foundation’s board and served as its treasurer.

The listed chief executive of the foundation, Kenny Dichabe, is also the chief operating officer of the Free State Gambling & Liquor Authority.

The chair of the Gambling & Liquor authority is Pillay’s brother, who is also chief executive of the Free State Tourism Authority. DM