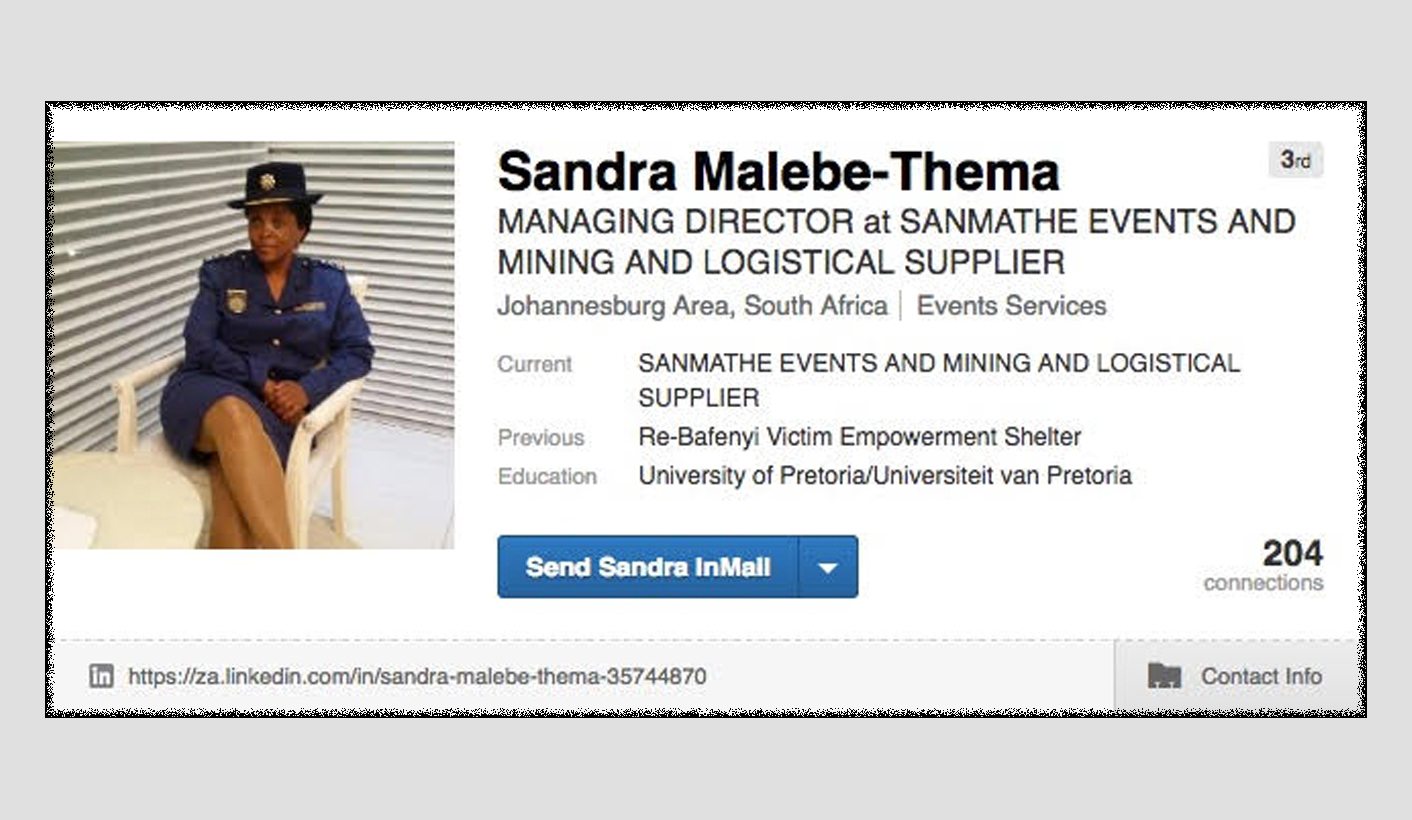 Major-General Sandra Malebe-Thema, current head of SAPS Basic Police Development has been implicated in the Life Esidimeni scandal that led to the horror deaths of 100 vulnerable and dependent patients. By MARIANNE THAMM.

Major-General Malebe-Thema is listed as founder and executive chairman of the Re-Bafenyi Victim Empowerment Centre which received a reported R270,000 for around 100 patients transferred there. Malebe-Thema, who was a brigadier and resigned from SAPS in 2013, allegedly to avoid charges of misconduct, was re-employed in March 2016 after Phahlane’s appointment in 2015. She boasts several business interests on her LinkedIn profile, including mining, catering, and “events and logistical” supplies, some of which are listed on government’s central supplier database.

Malebe-Thema is not one to shy away from hyperbole when it comes to her online biography. On the home page for the Re-Bafenyi Victim Empowerment Programme – which reportedly received around 100 patients moved from Life Esidimeni – executive chair and founder Malebe-Thema claims her “illustrious professional and business career has taken her into many and diverse business and social platforms. She enjoys a unique and influential personality within the South African Citizenry [sic] in socio-economic grounds she has more than twenty-seven years working experience both in the public and private sector”.

A blot however on this illustrious career, which began in 1984, is that Malebe-Thema currently faces a probe by the Western Cape Human Rights Commission for allegedly racially abusing police recruits during a 2016 training exercise at the Police Academy in Outshoorn.

Malebe-Thema resigned from SAPS in 2013 allegedly to avoid facing charges of misconduct; however, her LinkedIn profile states that she “retired at Brigadier level to establish a centre for victim empowerment”.

She was re-employed as a Major-General in March 2016 after acting commissioner Khomotso Phahlane had been appointed to his position in 2015. Daily Maverick has reliably learned that Phahlane is close to Malebe-Thema.

The Re-Bafenyi Victim Empowerment Centre website lists some of its “key partnerships” as “main government departments” which include “the Departments of Police (SAPS), Social Development, Local Government, Health, Justice, Ministry for Women Children and People with Disabilities in the Office of the President and Correctional Services, as well as the Atteridgville (sic) Police Station”.

According to Democratic Party Gauteng Health spokesperson, Jack Bloom – one of the key figures who exposed the transfer of psychiatric patients from Life Esidimeni health centres to unregistered NGOs which subsequently resulted in 100 deaths – Malebe-Thema’s Re-Bafenyi Victim Empowerment Centre based in Atteridgeville in Tshwane received 100 patients, some of whom were later transferred to a Re-Bafenyi centre in Hennops River and another in Phelindaba.

For this Malebe-Theme’s centre reportedly earned R270,000. One of these patients, the 56-year-old Christopher Mogwarane, died while at the Re-Bafenyi Hennops River facility.

On her LinkedIn profile Malebe-Thema has a profile picture of herself dressed in her SAPS uniform and describes herself as “Managing Director at Sanmathe Events and Mining and Logistical Supplier”.

“I started my career in the South African Police Service in 1984 being one of the first police women in Atteridgeville and First black female detective in the whole of South Africa I went through ranks of the Police and done lot investigations on ground but the Investigation that was next to my heart was investigation of Violent crimes against women and children that is where I identified gaps on holistic approach using multi disciplinary approach in investigating such cases thus results in secondary victimisation hence retired on Brigadier level to establish centre for victim empowerment.”

She also lays claim to supplying “commodities amongst others, fuel the whole country for SANDF, ESKOM both inland and coastal”.

Malebe-Thema and her husband Shadrack Thema are listed as directors of various companies listed on the government’s Central Supplier Database and which do business with the state.

Sections Eight and Nine of the act state that “‘employee’ includes persons contemplated in section 12A of the Public Service Act and a person performing similar functions in a municipality. (2) An employee may not— (a) conduct business with the State; or (b) be a director of a public or private company conducting business with the State”.

Daily Maverick requested Major-General Malebe-Thema to respond to the allegations but had received no reply at the time of writing.

“The questions you ask relate to an employer/employee relationship and will be dealt with internally according to prescripts.” DM