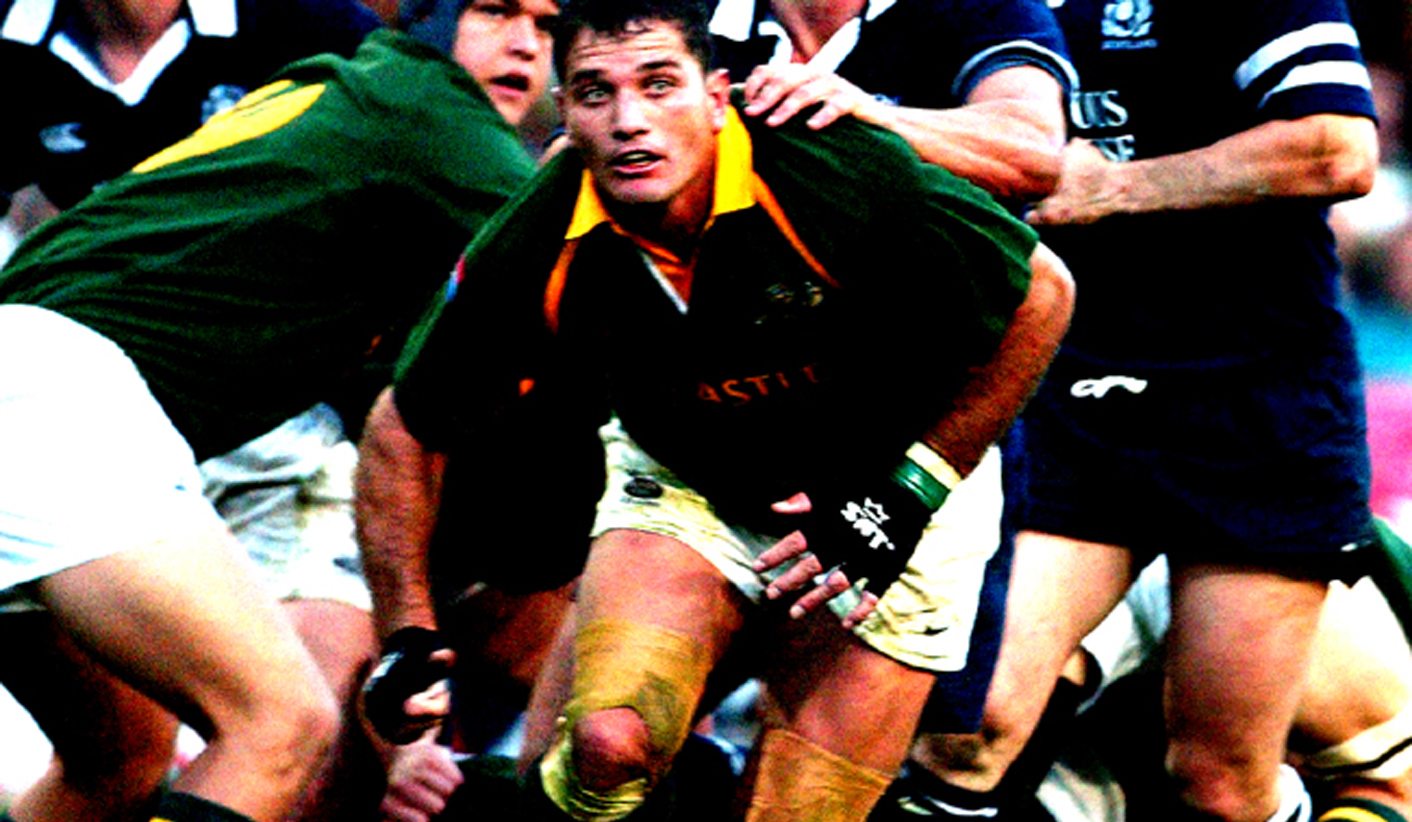 Known for his tenacity and fight on the field, Joost van der Westhuizen continued that battle off it in his retirement. A team man to the end, the legendary scrumhalf fought for those battling against motor neuron disease until his own final whistle blew. By ANTOINETTE MULLER.

Van der Westhuizen made his international debut in 1993, a year after South Africa’s return to the sport following the apartheid ban. At the World Cup two years later, he set the competition alight, combining brilliantly with winger Chester Williams to lead attacks from the blindside of the scrum. Van der Westhuizen let the world know that he had arrived.

But it was his try-saving tackle of Jonah Lomu during the 15-12 win over New Zealand in the final that would be the most memorable moment of his career. There were highs and lowlights after that – including a captaincy stint which saw the Boks exit the 1999 World Cup in the semi-finals – but that tackle embodies what Van der Westhuizen was all about, both as a player and later, when he fell ill.

He is widely regarded as one of the best scrumhalves to ever play the sport and, despite being considered unusually large for the position, he used his size to his advantage. Tenacious and annoying if you played against him, with a fearlessness that would change many a game, Van der Westhuizen earned every accolade that came his way.

Although his rugby career would fizzle out somewhat – he played an unremarkable part in the 2003 World Cup and retired through injury – he had redefined the position and continues to be a reference point for aspiring scrumhalves. To be able to hold that stature, even in a rapidly evolving era of the sport, underscores his influence on the game.

But being a global rugby icon – and one of the most recognisable players on the planet – did not come without its challenges off the field. Married to pop star Amore Vittone, the pair were the closest thing South Africa would ever have to “Posh and Becks”, but their relationship was far more troubled.

In 2009, Afrikaans newspaper Rapport and celebrity gossip magazine Heat published images of a man resembling Van der Westhuizen canoodling with a scantily clad woman while snorting a substance. Van der Westhuizen denied the allegations at the time, but at the release of his biography in the same year, the rugby star apologised to the South African public. There were further allegations of affairs and the pair later split.

Such shenanigans were something new for the South African public and something which has not really happened to anyone else since. In a sad way, it perhaps serves to further underline Van der Westhuizen’s “celebrity” status. For the press, it became easy fodder in the days before clickbait headlines. This unfortunate sideshow, though, did not blight his reputation as a player.

And while there is no doubt just how highly he is regarded in rugby circles, it is his subsequent battle with motor neuron disease – the illness that would claim his life – that many will remember him by.

To see the once muscly scrumhalf deteriorate over the last few years would have been a shock for many. But Van der Westhuizen remained as tenacious in his fight against the illness as he was against some of the most feared on-field opponents.

When he was first diagnosed in 2011, he was told he might not live to see his 42nd birthday. He did and Van der Westhuizen spent every single moment he could to use what time he had left for good use.

He became a champion for research through his J9 foundation and while nobody would have blamed him if he had retreated into his shell, he became actively involved in raising awareness around the disease and assisting with research in the years that followed.

Some might say that this was some form of repentance, but perhaps this was driven by his insatiable desire to compete. A team man to the end, Van der Westhuizen’s last hurrah was being on the team fighting against a disease that nobody has been able to conquer.

Part of this fight was captured in the documentary Glory Game which follows Van der Westhuizen on a candid journey in which he pursues research and tries to combat some of the misconceptions of the disease. In the documentary, he meets Lucky Manganje, a young man suffering from the same disease, who lives in Ga-Rankuwa and whose community thought that he was either bewitched or ill. While the documentary doesn’t go into all the details, Manganje not only continued to defy the odds against his illness, but began educating his community about the disease. The J9 foundation also helped grant Manganje (a Sharks fan) his wish of meeting Tendai “Beast” Mtawarira.

Cynics, especially in the current South African discourse, might point to this as some sort of “white saviour” moment, but it is far simpler than that. Using a position of influence to break stereotypes around the disease is a critical part of assisting patients in need.

But Van der Westhuizen’s fight against motor neuron disease wasn’t all meeting and greeting. In January, a motor neuron disease clinic at Chris Hani Baragwanath Hospital was opened to give specialised care to patients, a first of its kind in Gauteng. Similar clinics have also opened at Groote Schuur and Tygerberg hospitals in the Western Cape. He championed the fight for medical aid schemes to add motor neuron disease to their lists as a dread disease. The foundation continued work on its own research and supported 50 beneficiaries at the time of his death.

Just like on the pitch, Van der Westhuizen continued to fight for his team until the final whistle. DM