Theatre Review: ‘When Swallows Cry’ will make you cry 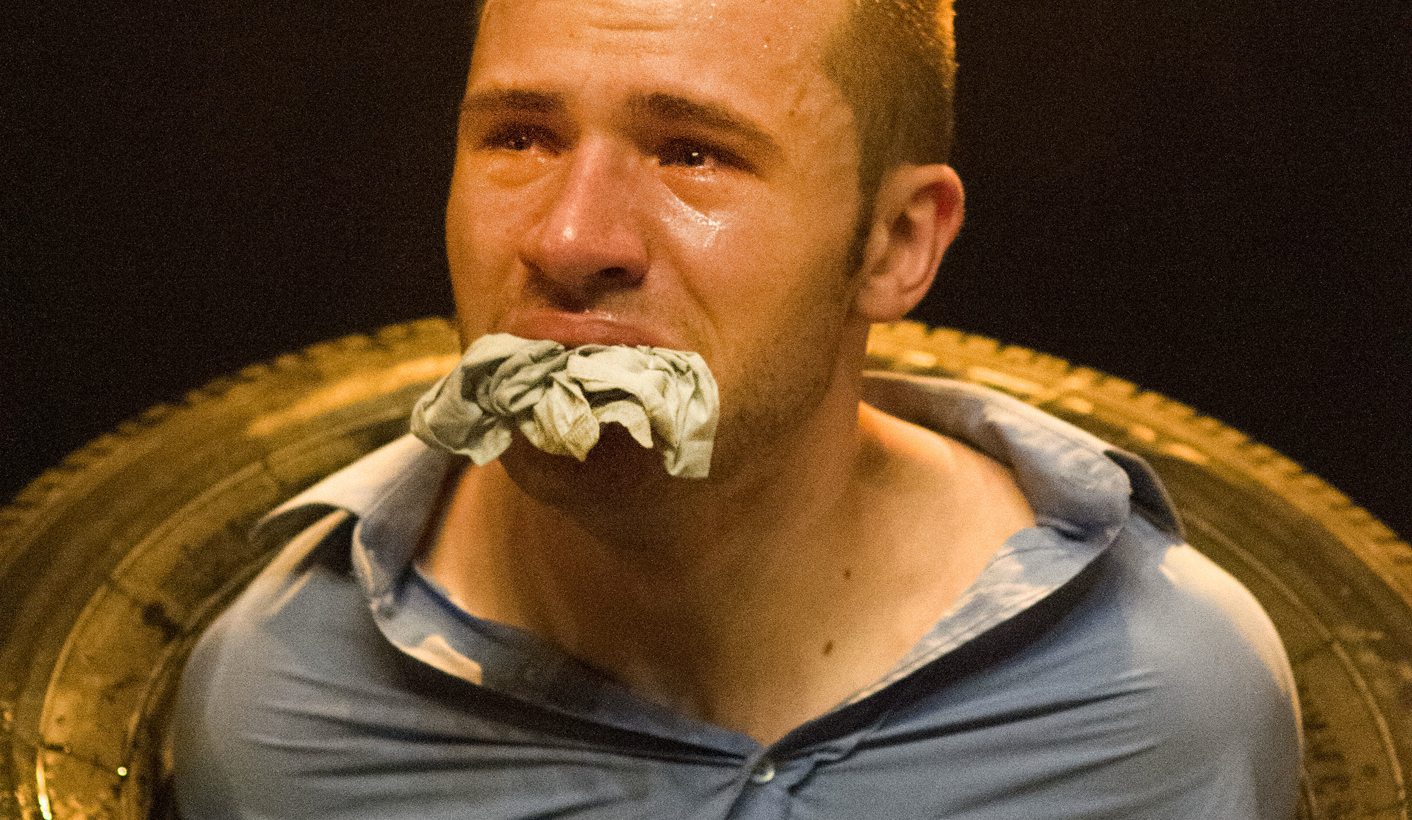 Now more than ever it is time to start deconstructing what it means to identify someone as an immigrant. What makes some immigrants and what makes others expats? NOMATTER NDEBELE reviews Mike van Graan’s new play When Swallows Cry.

Disclosure: Daily Maverick is a media partner to this production. The writer was not in any way influenced in writing her review.

When Swallows Cry is a trilogy of immigration stories. Set in three different countries, the play gives a moving and honest depiction of the lives of immigrants, and explores the spaces that immigrants occupy and the spaces that they are denied access to. The narratives present many uncomfortable truths, which are particularly glaring for someone like myself who is the child of an immigrant and knows first-hand what it is like to be shunted from queue to queue, and made to feel so small. In one moment, you’re watching three actors, and the next you are watching an uncle, a brother, a cousin. For some of us, the narratives are unfortunately very familiar.

Despite the seriousness of the issue, Mike van Graan still adds (in a way only he knows how to) humour. Perhaps a necessary coping mechanism, as we try to navigate the prejudice that we either experience or perpetuate. It is incredibly uncomfortable to listen to a migration officer refer to a black man as a monkey, but this is the brutal violent reality that many immigrants face in a quest for a new start.

Now more than ever it is time to start problematising and deconstructing what it means to identify someone as an immigrant. What makes some immigrants and what makes others expats? But most important, we need to start thinking about what it means to be at the mercy of policies that are designed specifically to control immigrants, rather than to support them.

The harsh reality that most immigrants face is that in recent weeks the world has reeled in shock and horror, in light of President Donald Trump’s statements about building a wall to keep Mexican immigrants out of America. At the mention of a physical manifestation of xenophobia, a form of division that people who aren’t immigrants will also have to endure, the world was up in arms.

In the past few days, safe spaces have become infinitely smaller as the American government has actively started to deny Muslims access to the country, under the Muslim ban. In a matter of minutes, people who have contributed to economies and built nations have had their dignity stripped from them. They have become alien in spaces of comfort that they built for the very people who are now fuelled by fear, and view them as the “other”.

The unfortunate reality, however, is that this rhetoric of “othering” is nothing new. In almost every country, immigrants face hurdles at every turn while they attempt a start a new life, or escape the horrors of war and genocide. Although most people are sympathetic to the struggles of refugees and asylum seekers, it seems proximity changes everything. We are forced to believe in this invisible power that immigrants have to disrupt our lives, to change what we perceive as ordinary, but in reality, refugees and asylum seekers are vulnerable, often helpless, and have very little power to be able to effect immediate and large changes.

Christiaan Schoombie, Mpho Osei Tutu and Warren Masemola give sterling performances, switching easily into their different roles and the energy they give to their performances shows how talented the seasoned actors are. They are each sensitive to the roles they portray and for the most part show an understanding of the broader issues. Immigrants are not just statistics, they are living, breathing human beings that cannot and should not be whittled down to a visa in a passport.

Masemola gives a larger than life performance as the commandant in Kenya, he is domineering, an unlikely intellectual. The commandant is fearless in his discussions around the horrors of slavery, oppression, as well as the relationship between developing countries and the First World – which always leaves the developing countries wanting. At least three times the commandant tells the audience about the logic of the “white man” who bought us poverty, and then another white man comes to tell us he will save us from poverty.

It is through the commandant’s scathing analysis of the social and political issues in developing countries that he forces the audience to think about the deeper issues, behind questions of belonging, occupying spaces as well as choice. For most immigrants, choice is a luxury. And despite what options are available to potentially start a better life, there is only one constant choice: are you going back or not?

Masemola then goes on to portray a desperate immigrant from Somalia who has been denied access to America, despite having been given a visa. For a moment, Masemola gives a face to the struggles that immigrants all over the world face. He gives a heartfelt and harrowing account of the desperation that shapes the decisions that immigrants are faced with.

Where there is a chance that immigrants can find themselves on the right side of policies, even that is not a guarantee of a new start. It is through the character of Amir that we come to understand this more clearly in Van Graan’s play. We see Amir, an immigrant from Somalia, detained and held for questioning at an airport in America. Amir is made to answer questions about whether or not he plans on carrying out terrorist attacks in America; he is asked if he knows a warlord with whom he shares a name, and again and again, Amir says, “I have a visa, I already answered these questions when I applied”.

While Van Graan’s play is set in Kenya, America and Australia, it is not difficult for South African audiences to locate themselves in the wider narrative of xenophobic violence and dysfunctional policies. Although there is little mention of South Africa, the two references to the country are rooted in violence and murder. Violence against the other has become so normalised and so entrenched in our society that the shock value of xenophobic deaths only lasts a few weeks before things settle down and we all carry on with our lives.

While Van Graan allows the audience to laugh, the humour is such that it forces one to confront the ugly truth of how we treat immigrants in the spaces that we occupy. While we laugh, we are forced to think about the social implications of movement, space and at the very core of it all, humanity and what that means. What does it mean for a man from Somalia to be seen as a threat because he has the same name as a warlord? What does it mean for someone who is afraid and desperate for safety to hear that they are someone to be feared, that they are a threat to someone else’s safety? What does it mean to be an immigrant?

Perhaps this is the time to reimagine the immigrant. Perhaps this is the time to do away with our fears of the other. In a time when we are all suffering, maybe it is time to band together and to find a way out of it together. We cannot and must not wait for walls to be built, before we rally to bring them down. We must not let unfounded fears dictate how we will live the rest of our lives – at the core of it all, we must choose humanity and love.

When Swallows Cry is an incredible show, it is exceptionally well written, every detail is well thought out, from the supporting multimedia to the stage lighting. It is a worthwhile show to see, you will cry, you will hurt, but more than anything else, you will learn and hopefully understand that immigration is more than just the evacuation and occupation of spaces, it is a story of sacrifices made in the hope of a better life. It is the story of broken families, endless longing, constant goodbyes and not enough welcoming arms.

We see you’ve tried to apply to exist in this country,

but somewhere in between crossing crocodile infested waters

And losing all you had

What did you think?

That you could come to a country that upholds human rights and just start anew?

See, here, you are just another refugee.

What more could you be?

Yes, we have laws and regulations

Our policies are made for people,

but you don’t fit that category

and here, that is all you will ever be.

Perhaps you should never have left

There is nothing for you here.

We work with numbers Sir,

and you are just one too many.

Thank you for your time

You’re in the wrong line. DM