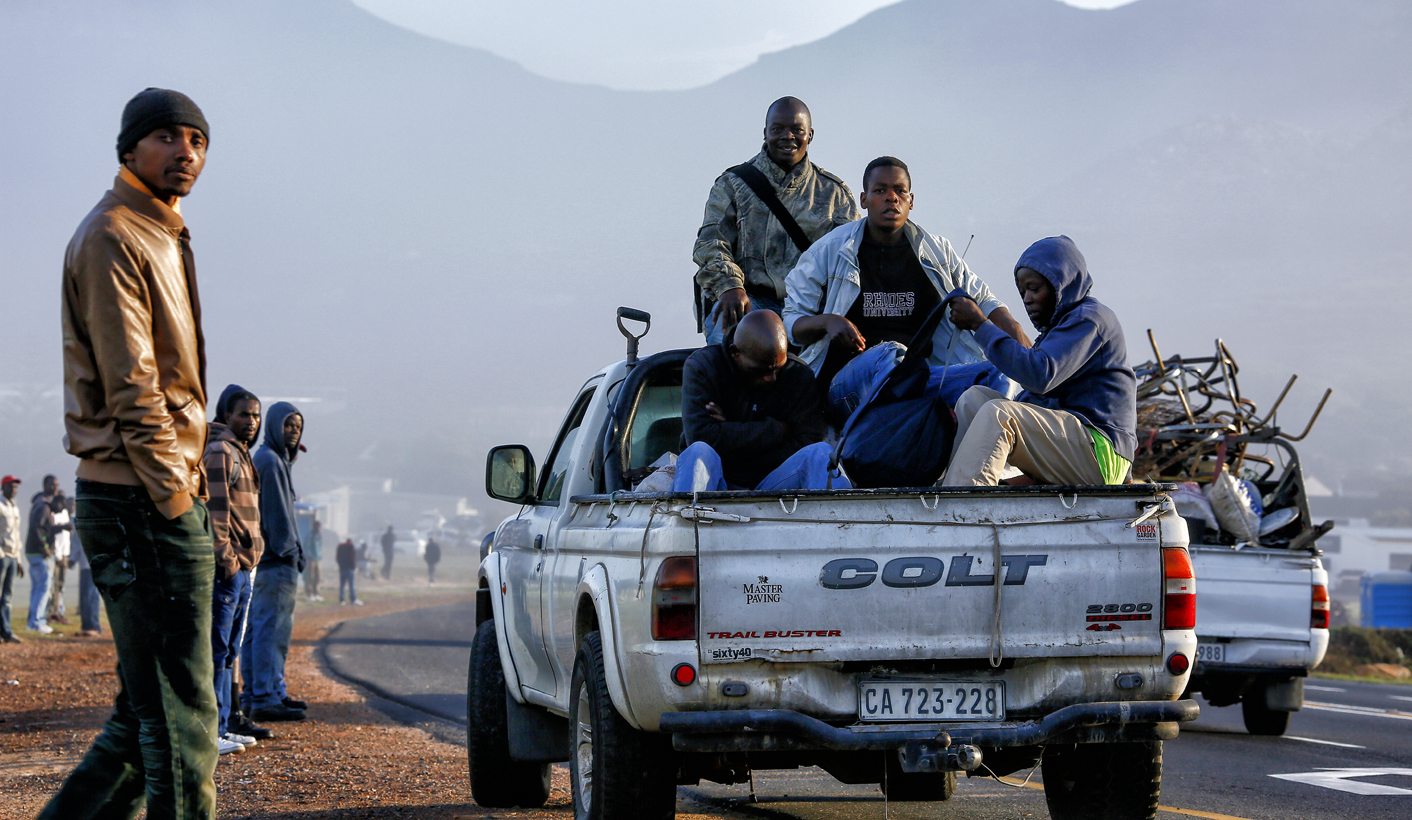 Prof Kaplan’s critique of the National Minimum Wage Report suffers from two fatal flaws. First, by not understanding our terms of reference, he sets up a straw man, which he then conveniently sets out to destroy. Second his approach cavalierly assumes that there are no existing labour market policies, regulations, and wage minima currently in place. By IMRAAN VALODIA.

On the one hand, a national minimum wage will have a positive impact on the earnings of workers who currently earn very low wages. On the other hand, however, the major concern with a national minimum wage is the potential disemployment impacts. Kaplan argues that “the main reason to convene a panel of experts is to make this trade-off explicit – to give it some real numbers”. This, he says, we failed to do, and that instead we produced a “fudge”.

One would have thought that before wading into the debate and making a determination about whether the panel has done its job, Kaplan would, at the very least, have taken the trouble to read the terms of reference of the panel, which sets out what we were expected to do. Unfortunately for Kaplan, it is not for him to decide what we should and should not do. Our terms of reference defined that.

Our terms of reference also required us carefully to consider the existing labour market institutions and to make proposals that integrate with, and do not undermine, current collective bargaining systems. It was of course also good common sense for the panel to make proposals that give explicit attention to the fact that the national minimum wage will be implemented into the existing institutional labour market that actually prevails in the country. Furthermore, we were asked to undertake the task and complete the report within a period of two months.

Prof Kaplan’s critique suffers from two fatal flaws. First, by not understanding our terms of reference, he sets up a straw man, which he then conveniently sets out to destroy. Second, his approach cavalierly assumes that there are no existing labour market policies, regulations, and wage minima currently in place. For the panel to take the Kaplan route would have both been a dereliction of our terms of reference and resulted in a report that would have been of no use to anyone, especially not the social partners in Nedlac.

His argument that we did not consider the trade-offs displays a remarkable lack of knowledge about the process to date.

The national minimum wage debate has been taking place for at least two years and it has generated an impressive set of research papers and findings. The panel’s job was not to do any more research but instead to weigh up the findings of the research already done and to come to a well-reasoned, evidence-based proposal. We had an enormous amount of research to consider, including research using economic models which explicitly dealt with the trade-off issue.

In its deliberations, the panel noted at least two preliminary points about modelling exercises of this sort. First, a model of this sort is an attempt to predict the future trajectory of the economy based on data from the past. By its nature, an exercise of this sort generates results that should be treated with caution. Second, the results of the models are driven very much by the theoretical assumptions made about how the economy will adjust to an increase in wages.

The panel was presented with the results of three modeling exercises which sought to estimate the possible impact of a national minimum wage in South Africa.

On the other hand, the so-called ADRS model suggested that the national minimum wage in the region of R4,500 would lead to only a marginal fall in employment, which would be significantly outweighed by a boost in consumption-led growth among low earners.

As argued above, all of these models’ results are driven very much by their structure and assumptions. The DPRU model, for example, is based on theory which says that an increase in the price of labour results only in a fall in the demand for labour, hence the negative impact. The ADRS model, on the other hand, sees a possible channel for productivity gains as a result of the national minimum wage. This model allows for the theoretical argument that workers who are better paid will work more productively (the so-called efficiency wage hypothesis). This model also generates an increase in the growth rate as a result of higher incomes among low-income households (a result of the national minimum wage), who spend disproportionately on domestically produced manufactured goods and services.

The panel debated whether we should work on a fourth model that would combine some of the theoretical arguments of the existing models with other possible consequences of an increase in wages. For example, might some employers respond by moving out of low-productivity sectors into higher productivity sectors, so improving productivity and economic growth? Might yet others respond by adjusting working hours, as appears to be the case in the domestic work sector?

These are all complex arguments and, in the end, the panel felt that, in the time at our disposal, adding another contested number, based on debatable theoretical assumptions, would not help the process at all. Instead, what was required was some clear thinking about what the overall evidence says to us.

Part of the work that we undertook was to overlay the distribution of wages in the labour market nationally and by sector with the set of sectoral minimum wages that currently prevails. We gave serious attention to both the minima set in the bargaining councils as well as the minima determined by the sectoral determinations. For example, our recommendations on agriculture and domestic work harmonise with recent sectoral determinations in these sectors.

In a sense, all of these minima are binding constraints in our considerations. When we say that 47% of wage earners currently fall below the minimum wage, that is the de facto reality. However, the percentage that would be bound by the proposed national minimum wage rather than by another higher sectoral minimum is notably less.

One of the reasons that we chose to use the formal models as useful inputs into our thinking rather than as definitive generators of “the number” is that they cannot give adequate account to this institutional complexity. In this regard it is worth noting that none of the social partners used their models in this naïve way either. For each partner, arguments were made using a model alongside detailed profiling of the labour market drawn from South Africa’s labour market survey data. There was considerable common ground across the partners in this micro-evidence and our report tries to accurately reflect this shared evidence base.

Kaplan also accuses us of not sufficiently taking account of the concerns of small business. He argues that our proposal that small business be granted an additional year for phasing in is a “concession” that is “derisory”.

This is simply untrue and he again misunderstands our terms of reference. The panel had to deal with the fact that small business is already bound by sectoral determinations that set sectoral minimum wages. The panel paid careful consideration to the concerns of small business and we had a number of consultations with representatives of small business. We remained unconvinced, based on evidence, that low-wage work is disproportionately a problem for small business. In fact, the data suggests otherwise.

The panel did receive submissions on start-ups and the need for special concessions for young firms. However, like small business, start-ups are a heterogeneous group. Moreover, we have no evidence that start-ups would, as a group, be placed under undue pressure with a wage level of R20 per hour. There are also significant problems associated with creating too many exceptions in the system, and creating incentives for firms to continuously reinvent themselves.

Kaplan completely ignores the panel’s important proposal that the introduction of a national minimum wage must be accompanied by an efficient exemption process that will, on economic grounds, make the necessary concessions for all firms who may make a case for placing the short-term goal of a national minimum wage in abeyance in the interests of longer-term employment and economic growth. So, rather than deal with each specific group – start-ups, small business, black business – the panel took the position that an efficient and general exemption process was a more effective policy instrument.

The panel is in full agreement with Kaplan’s concern about the substantial incentives to capital investment, which may be having the effect of reducing the demand for labour. This is a complex issue that needs careful research and consideration but, as a general principle, the panel does believe that incentives to boost labour demand may be an appropriate policy measure.

While we welcome Kaplan’s critique, it is quite clear that his is a cheap shot at the panel’s report. He has misrepresented our brief, misunderstands our proposals and appears to be arguing for some sectional interests. He has dialed the wrong number. DM

Imraan Valodia is Dean of the Faculty of Commerce, Law and Management, University of Witwatersrand, and Chair of the National Minimum Wage Advisory Panel.

Photo: A pickup truck moves off after loading unemployed builders and painters from a roadside for work in Cape Town, South Africa, 20 May 2015. EPA/NIC BOTHMA