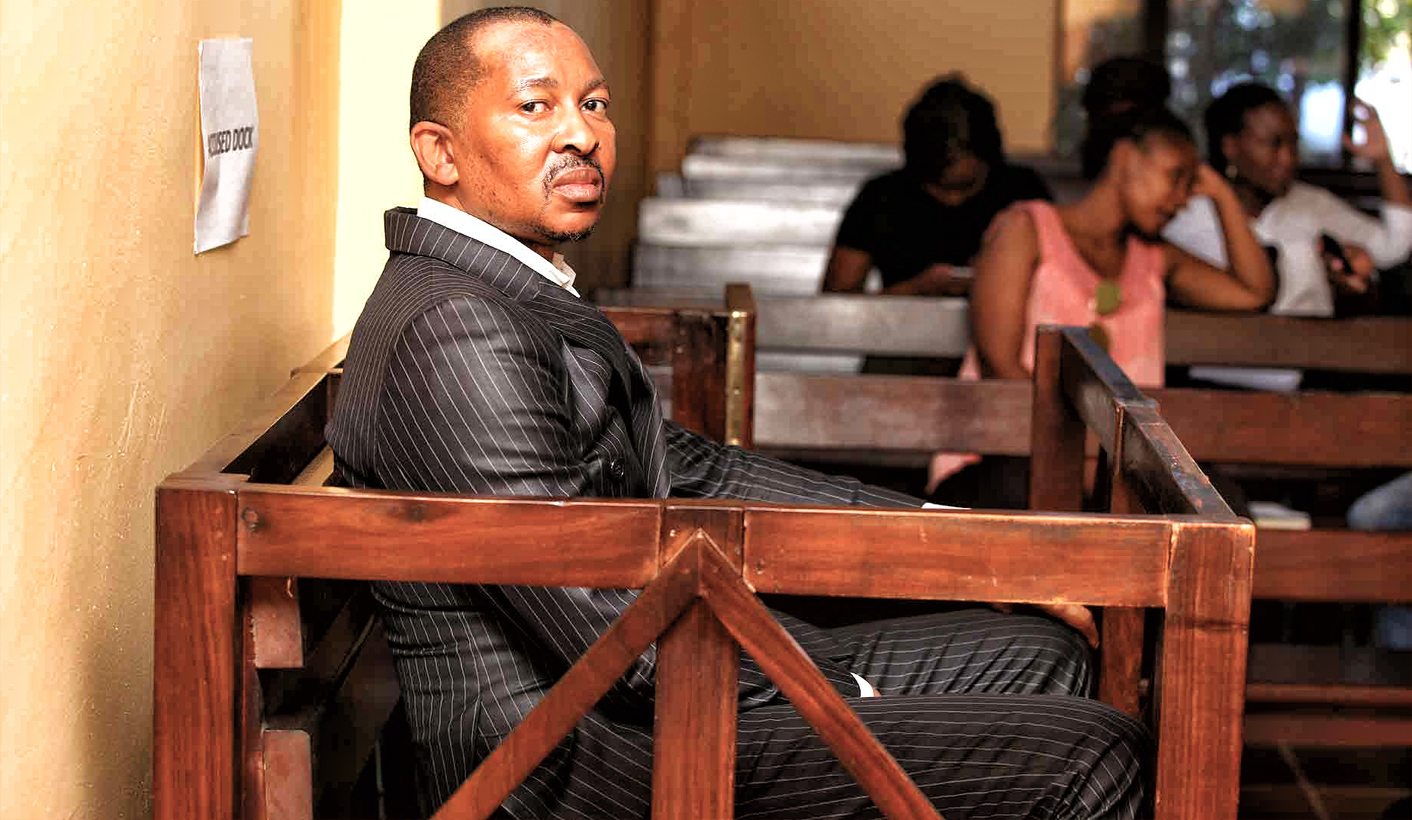 While the recently released biopic A United Kingdom dramatising the love affair between Botswana’s first president Seretse Khama and his wife-to-be, Ruth Williams, has blipped the country back onto international media radar, Outsa Mokone, editor and publisher of the Sunday Standard, one of Botswana’s few independent newspapers, faces a two year jail sentence for “sedition” while senior reporter, Edgar Tsimane, has been forced into exile in South Africa. Their crime? Reporting on a late-night car accident involving current president Ian Khama. But is that the real reason? Mokone spoke to MARIANNE THAMM.

It is a very biblical accusation. Belongs up there with a few other archaic transgressions including fornication, lasciviousness, uncleanliness and idolatry. Sedition or seditious libel has its origin in English Law, way back when in a still feudal country the monarchy was viewed as having a divine right and subjects (not citizens) were forbidden from questioning or criticising the “powers-that-be”.

Seditious libel, in the few places on earth where it still exists in the law books, including Botswana, is generally viewed as having no place in a modern democracy. In 2009 the British Parliament voted to repeal the act (originally promulgated in 1661) after a long campaign by free-speech lobbyists in that country highlighting that the offence is “obsolete” and in contravention of global human rights legislation.

Claire Ward, Parliamentary Under Secretary of State at the Ministry of Justice in the UK, declared at the time that, “Sedition and seditious and defamatory libel are arcane offences – from a bygone era when freedom of expression wasn’t seen as the right it is today… The existence of these obsolete offences in this country had been used by other countries as justification for the retention of similar laws which have been actively used to suppress political dissent and restrict press freedom… Abolishing these offences will allow the UK to take a lead in challenging similar laws in other countries, where they are used to suppress free speech.”

Which is what happened in the kingdom of Swaziland in September last year when the Swazi High Court ruled the Suppression of Terrorism Act and the Sedition and Subversive Activities Act unconstitutional. It was a ruling welcomed by Swazi pro-democracy groups but one that might be challenged or simply annulled by royal proclamation.

That’s how the monarchy rolls.

Botswana’s Sunday Standard editor and publisher, Outsa Mokone, wearing his trademark purple Kangol trilby, spent the holiday season with his family in Cape Town. He doesn’t look like a man too troubled by the prospect that he might spend two years behind bars on charges of sedition or that he has succeeded in making history, becoming the first person in Botswana’s history to ever be charged with sedition.

“I am not in exile. I will not run away,” Mokone told Daily Maverick.

Botswana, regarded until recently as a bastion of democracy on the continent, has been making headlines for all the wrong reasons as the government of President Ian Khama’s Botswana Democratic Party faces criticism for its increasingly authoritarian tendencies as well as a growing concern with regard to the abuse of state resources.

In this climate a free and independent media is vital, which is a problem in Botswana where the overwhelming bulk of media – print, radio and television – is government-owned. Private newspapers, such as Mokone’s Sunday Standard, are rare.

Mokone was arrested in September 2014 after what appears to be a relatively minor news event. One of his senior reporters, Edgar Tsimane, had filed a story that President Khama’s Jeep had rear-ended the vehicle of a visiting Zambian, Mabitha Kaunda, in the country’s capital, Gabarone, on the evening of August 23. The accident was not reported to police. Tsimane, said Mokone, had interviewed several witnesses to the accident including Kaunda who has since gone to ground.

Mokone was in Cape Town with his family when he received a call that police were looking for Tsimane. When he returned to Botswana he was instructed to report to police and account for Tsimane’s whereabouts. When he could not, Mokone was detained and held for 24 hours without access to his lawyers. Tsimane had, in the meantime, fled to South Africa after a tip-off that he was being sought by the country’s intelligence agency.

Mokone told Daily Maverick that he suspected he had been arrested and his computer impounded after the Sunday Standard had run a series of investigative pieces about corruption in the Directorate of Intelligence and Security Services and which allegedly implicated President Ian Khama.

“A lot of money had been siphoned off through the Intelligence Services. They simply do not have to account for it. They were giving tenders to themselves and friends and family. We ran a number of stories. Around the same time the Directorate on Corruption and Economic Crime (DCEC) was investigating the head of the Intelligence and we were able to get hold of the docket and started running the investigation. The DCEC went to court to stop us. They were given an interdict and I suspect they wanted access to my computer to see where the leaks were coming from,” said Mokone.

Mokone then became the first person in the history of Botswana arrested under the country’s sedition laws. In August 2016, an attempt by his legal team to challenge the constitutionality of sections 50 and 51 of the Penal Code that relate to sedition was overturned by an acting High Court Judge, Jennifer Dube.

Mokone is appealing the High Court ruling while also facing a parallel case in the magistrate’s court on the actual charges of sedition. If the appeal fails, Mokone faces the possibility of a jail sentence.

Ian Khama’s Botswana Democratic Party secured its 11th victory during the country’s national general election which took place in October 2014, a month after Mokone’s arrest. The political climate in the country was tense in the run-up to the elections when popular opposition party leader Gomolemo Motswaledi was killed in a car crash in July.

In September, Oarabile Motlaleng, of the opposition Botswana Congress Party, claimed he had been kidnapped, tortured and left for dead by members of the Botswana Directorate of Intelligence and Security Services, who are close to Khama.

Mokone is concerned about the direction Botswana seems to be heading.

“You need only check the World Rule of Law Index which will give the best picture of Botswana and how it has been regressing over the years. The first report was in 2011. Around that time the index showed that Botswana was the best country in Africa. In all the indices we came first. We were the best. But then over the years, starting with 2012/13, we started dropping and a lot of countries began overtaking us. This year 2016 there are instances where we have slid over 48 spaces,” said Mokone.

While press freedom is not guaranteed in Botswana’s constitution, freedom of expression is.

“The constitution grants us freedom of speech but what is the use of it if you can’t criticise the president because the sedition law says you can’t do so?” asks Mokone.

Mokone is also concerned with the number of acting judge appointments in Botswana and how this has impacted on the independence of the judiciary. Four High Court judges, who were among 12 who had signed a petition calling for the impeachment of Chief Justice Maruping Dibotelo, were suspended in August 2015 “for bringing the judiciary into disrepute”.

“A lot of judges in Botswana are believed to be executive minded. About a quarter or a fifth of our lawyers are acting judges. The independence of the judiciary rests on the security of tenure,” said Mokone, adding that Judge Jennifer Dube who had ruled on the application to have the sedition section of the Penal code ruled unconstitutional “is young, has no track record and has not practised as a lawyer”.

Mokone is of the opinion that the judiciary, the intelligence service as well as the media in Botswana have all been “captured”. As an aside, he mentions that SABC COO, Hlaudi Motsoeneng, had advised Botswana’s national broadcaster.

“The problem is Botswana has always had good presidents. Our constitution gives the president a lot of power. In Botswana you cannot take a sitting president to court. He is above the law. Over the years we have tried to raise this. We have said you can’t have a law like this. What if some time in the future we have an autocratic president? In Botswana power is centralised in the president. Also, our institutions are weak, not like in South Africa.”

The 2014 election, said Mokone, highlighted the ruling party’s paranoia when Reginald Richardson, the host of a popular morning show on the privately-owned radio station, Gabzfm, had conducted a series of pre-election interviews with opposition party members. The ruling party had been invited to participate but had declined.

“Immediately after the elections government published a list of publications and radio stations it would no longer use to place government advertising. Gabzfm was among them. Then they pressured the owners to suspend Richardson, which they did.”

There was also no recourse in the labour courts as in November, said Mokone, a Botswana High Court ruling entrenched the right of employers to fire employees.

Mokone says he is “very concerned” about developments in his country.

At present Mokone is unable to leave Botswana without notifying the Directorate of Public Prosecutions (DPP), a condition of his bail. He will appear again on January 27 for a “status hearing”. Meanwhile Mokone has vowed to continue exposing corruption and to uphold the principles of freedom of the press.

“I am prepared to go to jail,” he said “but my wife and my family aren’t too happy about that,” he added with a smile. DM

Ninety One • 4 hours ago