Marikana: More than four years after the massacre that shocked the world, charges against police finally laid 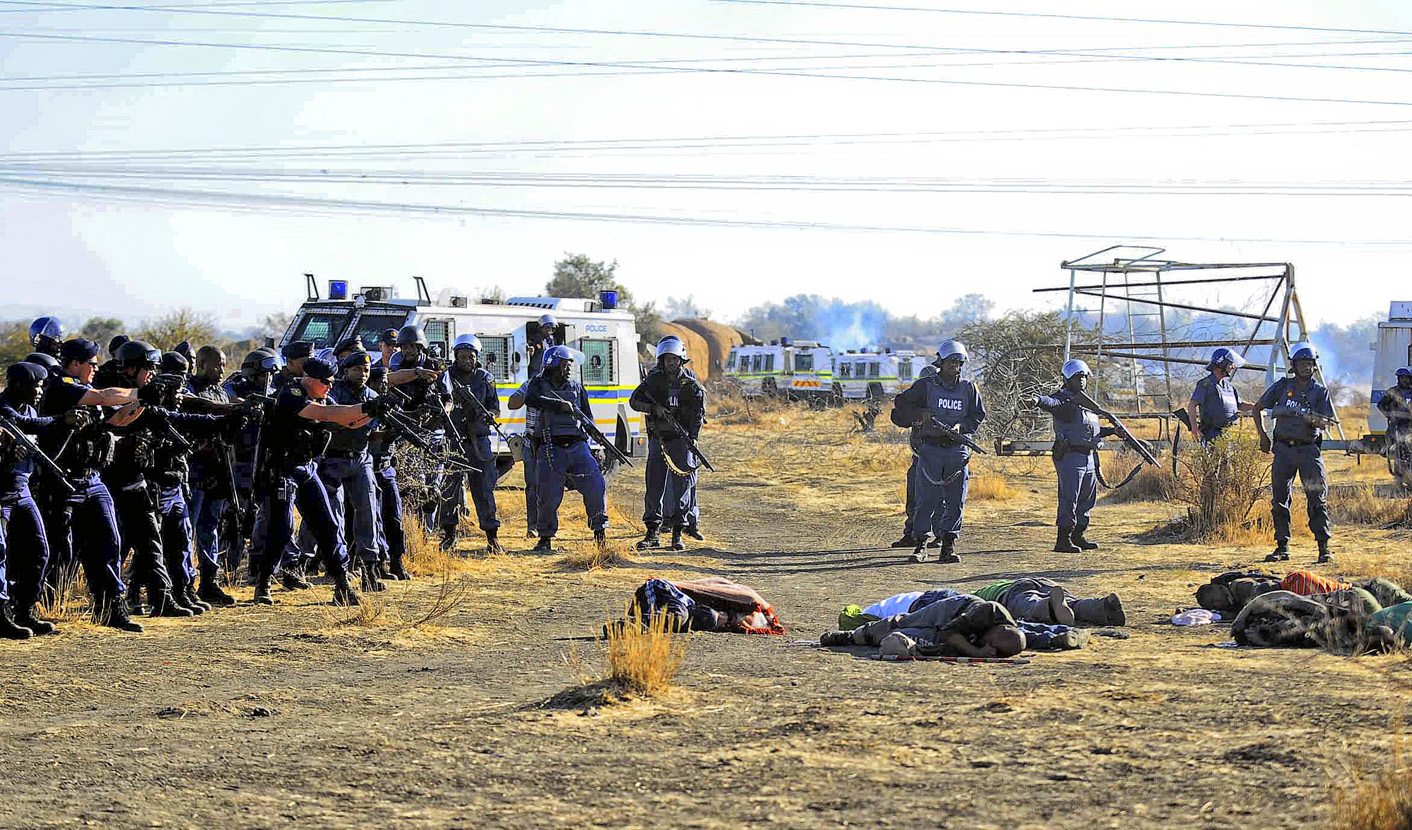 Over four years after the Marikana Massacre, the Presidency’s announcement on Sunday that some police officers would be charged and compensation is ready to be paid was welcomed, albeit cautiously, by victims’ representatives, whose fight for justice has repeatedly been delayed. By GREG NICOLSON.

There’s evidence showing that at almost every stage of the Marikana operation, the SAPS either broke the law or ignored its own policies. There was the confusion, possible murders, on 13 August. The bungled attempts at crime intelligence. The arbitrary decision to “go tactical” and forcefully end the Lonmin strike, linked to documented company and political concerns about talking to workers. An ill-timed and disastrously implemented plan at scene one on 16 August, leading to 17 deaths. A chaotic and murderous pursuit of miners at scene two, causing another 17 deaths. And a cover-up defined by lies and distortions.

Justice, in the form of criminal charges against responsible SAPS officers, and compensation for workers who survived and the relatives of those who were killed, has been elusive after the report from the two-year commission of inquiry was finally released in June 2015 by President Jacob Zuma. The Presidency on Sunday offered some hope, although after repeated delays the commitments have been met with scepticism.

The Marikana Commission of Inquiry recommended that the Directorate of Public Prosecutions should investigate a wide range of claims against police. The National Prosecuting Authority (NPA) has been working with the Independent Police Investigative Directorate (IPID) to investigate potential charges. In an update on the implementation of the commission’s recommendations, the Presidency on Sunday announced that multiple charges have been laid against SAPS officers. The Presidency’s statement was opaque, but it appears most of the charges laid relate to the five deaths – three strikers and two police officers – on 13 August, while the killings on 16 August are still being investigated.

Investigations found an officer in command was “remiss in his conduct when dealing with the incident of 13 August 2012, which led to the deaths of two police officers, namely, Warrant Officer Lepaaku and Warrant Officer Monene, as well as three strikers, Mr Mati, Mr Sokhanyile and Mr Jokanisi”, the Presidency said. The officer facing charges, which is clearly Major-General William Mpembe, has been charged with four murders – two strikers and two police officers – and six counts of attempted murder for those injured on the day. He will also face charges of defeating the ends of justice for how he presented his role in Marikana.

“A colonel, warrant officer and a constable have all been charged for the murder of Mr Sokhanyile,” the Presidency continued. Sokhanyile was killed on 13 August, but the commission did not make conclusive findings on who the killer might be.

A criminal case has been opened against a major-general, which evidence suggests is Ganasen Naidoo, for defeating the ends of justice. He was in command at scene two on 16 August and the commission said he failed to exert command and control at what has been termed the “killing koppie” and failed to give his firearm to the SAPS ballistics team on time. A case has also been opened against a brigadier who failed to secure the recordings of the SAPS management meeting where the decision to “go tactical”, which led to the events of 16 August, was taken. The recording was with Brigadier Ledile Malahlela when it was suddenly erased and crucial information on the SAPS management’s decisions on the operation at Marikana was lost.

“Forensic, ballistic and other evidence, including the authentication of incident footage, are still outstanding. Also, indications are that the police might have tampered with the crime scene,” said the Presidency, suggesting further charges are on the way. Two brigadiers, one heading the North West provincial detectives unit and another in charge of detectives at a detention centre, have been charged with defeating the ends of justice for concealing a death in custody. It’s unclear which death this relates to as it does not appear to have come up in the commission. The Presidency also said charges are being considered against those who misled the Marikana Inquiry, which could affect top officers like suspended Commissioner Riah Phiyega.

NPA spokesperson Luvuyo Mfaku on Sunday said prosecutors and IPID are still working on investigations and the NPA has not yet decided to prosecute any of those who charges have been laid against. “I’d imagine that a decision would be taken fairly soon,” he said.

“I think for the families, they’ll be very relieved that there will be some movement on criminal prosecutions,” said Socio-Economic Rights Institute (SERI) director of litigation Nomzamo Zondo. SERI represents the families of 36 people killed at Marikana.

A source who worked closely with the Marikana Commission and who requested anonymity on Sunday said the exact details of the charges are not clear from the statement and we will have to wait to see “if this NPA performs”. The lawyer warned of potential “scape-goating to protect certain other commanders”. Some officers, like Mpembe, who has been charged with a wide range of murder and attempted murder cases, have already been sidelined in Marikana’s aftermath.

Another source, an expert in policing issues who has worked comprehensively on Marikana-related issues, said “don’t hold your breath” on criminal prosecutions. While the Presidency’s statement suggested further charges against police at Marikana might be likely, the source said even with prima facie criminal cases against police officers using lethal force in the line of duty it’s “notoriously” difficult to secure prosecutions. “Even if they are prosecuted, one should not assume that convictions are likely.”

Rehad Desai from the Marikana Support Campaign on Sunday said, “We whole-heartedly welcome this statement as a starting point for justice for the victims of Marikana. The prosecutions against the police are a real beginning but we believe it’s inconceivable that Lonmin executives have not been held accountable on criminal charges as should be the case with the ministers who were advanced in the planning of this operation. We welcome it as a fine starting point but it’s certainly not the end of the matter.”

Desai called for further investigations into Lonmin executives and Cabinet ministers accused of involvement (whom the commission of inquiry mostly exonerated, due to insufficient evidence). He said issues about political interference within the NPA are well known, but he hoped it would not be the case regarding Marikana.

Andries Nkome, attorney for the 275 injured and arrested mineworkers in Marikana, also called for further action against Lonmin and politicians accused of causing the massacre.

“We have said that it is not enough for consequences only to follow on Riah Phiyega [reportedly about to be fired after the findings of another commission]. We expect consequences to follow for Cyril Ramaphosa,” he said, noting the deputy president’s alleged involvement, along with a number of other ANC politicians.

The Presidency’s statement also spoke of the compensation claims from the families of those who died in Marikana as well as the injured and arrested strikers:

“Regarding the compensation for the Marikana victims, government is ready to pay. The SAPS has instructed its attorneys to make offers of payments in full settlement of claims for the claims where quantification were complete and are not under criminal investigation,” it said. Lonmin has given jobs to the family members of employees who were killed, but financial support is a key concern for many of the deceased’s relatives.

“All the time we hear about offers being made to us in the press, in media statements, and the Presidency is not communicating with us on how to settle the claims,” said Nkome, noting past commitments.

“It still feels like they are playing to the media, playing to the public, that there isn’t any real sympathy for the families,” said Zondo. She said if government is now willing to pay, effectively admitting responsibility for the actions of the SAPS, it should now say when and where it will apologise for what happened.

If compensation is only paid on the potential income the mineworkers might have made, it won’t amount to much, said the lawyer involved in the commission. “Loss of support will be an actuarial forecast of the pittance that would be earned by the mineworkers had they not been killed. This is wholly inadequate compensation for killing their fathers, husbands, sons and brothers.”

The Presidency statement also spoke on broad police reforms suggested by the Marikana Inquiry and Lonmin’s social and labour plan, which the commission found the company failed to implement, a contributing factor to the conditions that led to the massacre. On housing issues, the Presidency noted Lonmin’s recent progress had been slow and the Department of Mineral Resources would take further action and could suspend or cancel Lonmin’s mining licence if it does not comply with requests. Lonmin head of communications and branding Wendy Tlou on Sunday said the company is committed to “doing its part as outlined in the report” but it needed an opportunity to study the Presidency’s statement.

Droplets of justice might be on the way, but the drought isn’t over. DM