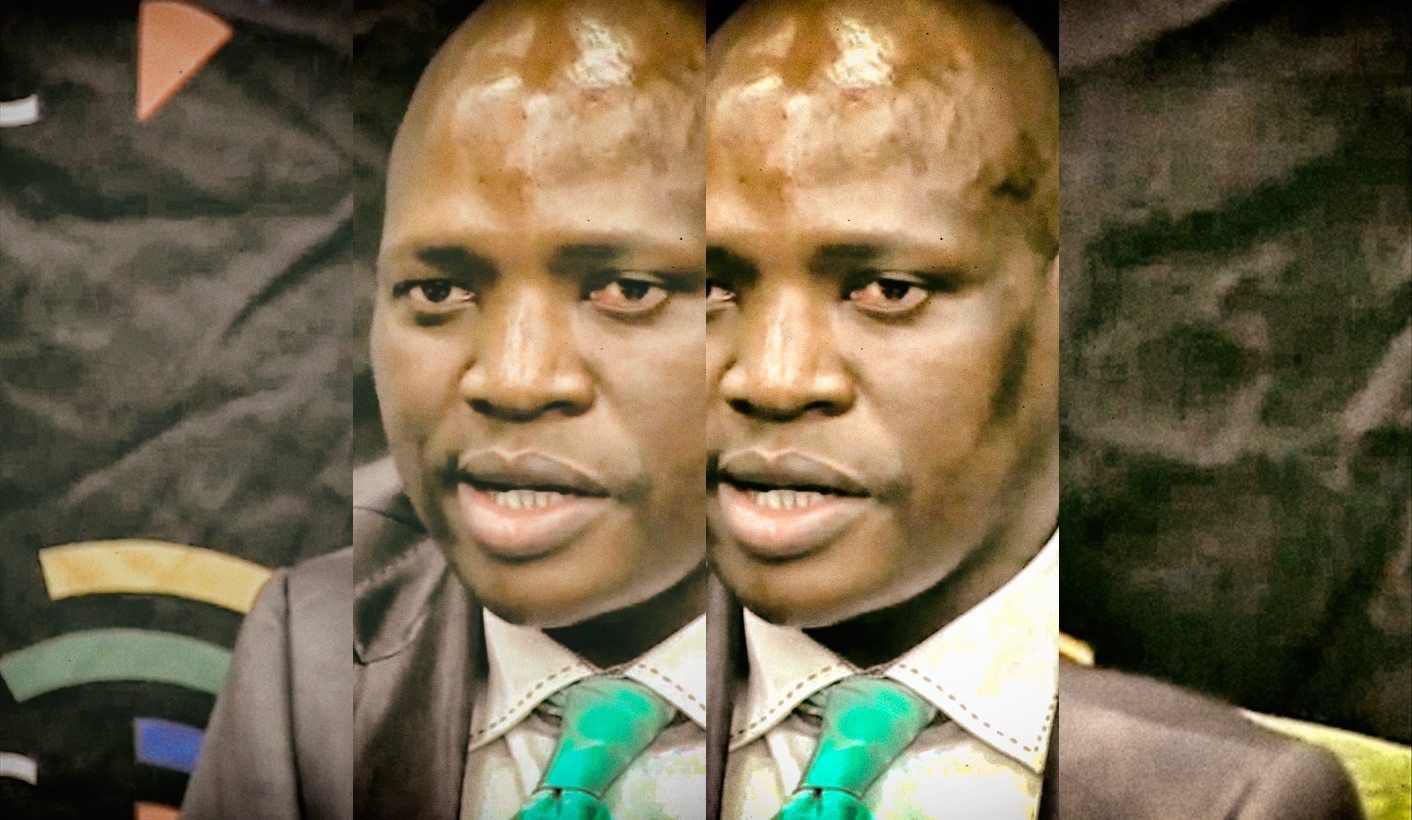 Witnesses testifying on Thursday before Parliament’s ad hoc committee investigating the SABC painted a terrifying picture of intimidation, ministerial interference, secret meetings as well as an unhealthy cult-like worship that surrounded COO Hlaudi Motsoeneng. Several committee members tried to flush out who exactly it was behind Motsoeneng’s power and apparent untouchability, but no one dared answer. At the end of the day a summons was issued to compel lone ranger board chair, Professor Mbulaheni Maguvhe, who simply failed to pitch, to appear on Tuesday next week. By MARIANNE THAMM.

Considering the climate of fear, intimidation (including death threats), the regular flouting of the law and general “Mafia tendencies” that have prevailed at the public broadcaster over the past few years it is little wonder that the last man standing, SABC board chair Professor Mbulaheni Maguvhe, attempted to stop Parliament’s inquiry into the board.

Had witnesses reported finding a horse’s head in their bed or a dead cat dangling from their front door, no one on the ad hoc committee would have been surprised, quite frankly. That’s how bad things are at the country’s ‘public’ broadcaster.

Maghuve, who was due to be questioned by the ad hoc committee at 16:00 on Thursday, simply failed to pitch, displaying supreme and now routine contempt for Parliament. In the end the multiparty committee unanimously resolved to summons Maghuve to force him to appear on Tuesday next week.

Witness after witness on Thursday revealed how former board chairwoman Ellen Tshabalala (who like Motsoeneng had lied about her qualifications) and Communications Minister Faith Muthambi bullied and intimidated board members into appointing Motsoeneng.

Muthambi had, in effect, staged a coup at the SABC, overriding the powers of the board.

The committee heard how Muthambi once gatecrashed an 11pm board meeting where Motsoeneng’s appointment, after the release of the Public Protector’s report, was being discussed.

Former board member, Ronnie Lubisi, who was also on the SABC’s audit committee, was the first to make a submission on Thursday and told the ad hoc committee that a meeting was held with Muthambi in July 2014, shortly after Tshabalala had been appointed as chair.

Muthambi had, in that meeting, told the board that Motsoeneng, who had been acting COO, needed to be appointed permanently – this even after the adverse findings by the Public Protector. Muthambi, said Lubisi, had told the board that she considered it to be dysfunctional.

“Former chairperson of board Ms Ellen Tshabalala and Mr Motsoeneng mentioned that the major problem of the board was specifically myself and Professor Bongani Khumalo‚ who were mentioned as some of the people causing problems on the board‚” said Lubisi.

Next up was a visibly anxious former CEO Lulama Mokhobo who informed the committee that the levels of “adoration” for Motsoeneng had been “extraordinary”. Motsoeneng, she said, had constantly sought to undermine her, a situation which had become “unbearable”.

Mokhobo told the ad hoc committee that she had been threatened if she “spoke out” about the SABC to the committee. When asked by the EFF’s Fana Mokoena who it was that was threatening her, Makhobo replied, “I can’t tell you but they are certain members of the SABC.”

The DA’s Mike Waters cut in, saying that it was important to determine “where Motsoeneng got his power” and that Mokhobo should not feel intimidated as she was “protected here”.

Committee chair, Vincent Smith, said he would meet with Mokhobo privately to discuss the threats and suggested that perhaps witness protection should be arranged.

Former long-serving board member Vusi Mavuso, who resigned in October citing Motsoeneng’s R11.4-million bonus as “the last straw”, told the ad hoc committee that there was an unhealthy relationship between the board and the executive. He said that former chairs including Dr Ben Ngubane, Tshabalala as well as Maghuve all “mollycoddled” Motsoeneng.

He said Muthambi had accused board members of undermining the executive and had effectively usurped the responsibilities of the board, an action which was “highly irregular”. Mavuso said he took umbrage at Tshabalala’s injunction that Motsoeneng “must be appointed” after she had “extolled” his virtues.

“It was skop, skiet en donner at the appointment of Motsoeneng,” Mavuso told the committee, adding that while the majority of the board members had supported the appointment, “I abstained from the vote”.

Asked by Mokoena whether he had been threatened, Mavuso shot back, “I wish they would try.”

Mokoena then asked who it was that was at the centre of the “whirlwind” at the SABC, to which Mavuso replied without hesitation, “Motsoeneng”.

The DA’s Phumzile van Damme asked Mavuso – who had, she said, painted a picture of undue influence – whether President Jacob Zuma’s name had ever cropped up.

“Not that I am aware,” he replied.

Maghuve’s slot at the committee had been designated and he was scheduled to appear at 16:00 on Thursday. The hour came and went and there was no sight of the Prof. Committee chair Vincent Smith then requested members to decide whether to summons Maghuve or find another way of getting him to testify to the committee.

The ANC’s Dr Makhosi Busisiwe Khoza weighed in saying that the committee needed to restore the integrity of Parliament and ensure that parastatals “were doing their work”.

In the end the committee unanimously resolved to issue a summons forcing Prof Maghuve to appear.

In closing Smith said that it was concerning that the SABC skills audit, conducted by audit firm PricewaterhouseCoopers in 2013, would not be presented to the ad hoc committee.

The audit – presented to Parliament in 2014 – found that the public broadcaster lacked critical skills (particularly in relation to the migration from analogue to digital).

The audit revealed that 60% of executive and senior managers at SABC did not meet the minimum strategic thinking skills for executives; 56% were unable to demonstrate adequate levels in solving problems and making decisions, and a further 15% demonstrated only marginal competence in strategic thinking and problem solving.

The PwC audit also revealed that 78.23 % of staff respondents said they did not trust the SABC management team or the SABC board and questioned their credibility. The audit found that only 1,868 of the qualifications of those employed could be authenticated and that 2,252 [or 62%] of the employee personnel files had no proof of a senior certificate on file, 24 employees [1%] had non-related qualification on file (e.g. a finance administrator had a diploma for beauty and health on file), 124 employees’ personnel files could not be produced by the central hub and there was no audit trail available to track the movement of these files, and that 24 employees [1%] had fraudulent or non-compliant senior certificates and Grade 10 certificates.

On Friday former board member Krish Naidoo (who resigned with Mavuso in October) is scheduled to appear along with journalist Phil Molefe (who received a R1.5-million golden handshake in 2013, as well as Itani Tseisi, former Group Executive Risk and Governance.

The net is closing in on King Hlaudi as on Monday the Western Cape High Court is due to hand down judgment in the DA’s application to have him finally and permanently removed from the SABC.

Motsoeneng – who has run up legal bills amounting to millions opposing any attempt to remove him – has argued that the court has no jurisdiction or powers in a matter he and his legal team consider to be about “employer and employee relationships”.

After the court reserved judgment on November 24, Motsoeneng told the rent-a-crowd of supporters who had gathered that “there is only one Hlaudi. I can change South Africa in six months.”

The man clearly thinks he has special powers and as of yet, the hand of the Godfather who has bestowed these upon him remains hidden. But not for much longer. DM